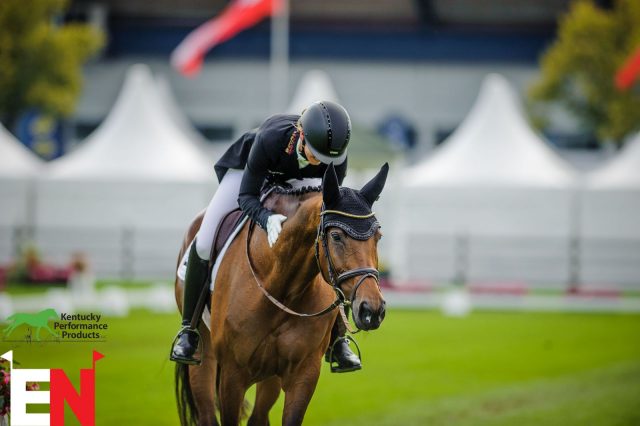 “She was quite wild when she was young — her name was Crocodile because she was always biting and kicking and a bit like a mare,” laughs a teary and beaming Sophie Leube. But along the way, something has evidently clicked into place for Jadore Moi, the eleven-year-old Brandenburg mare with whom she leads CHIO Aachen CCIO4*-S at the culmination of the dressage phase. These days, Sophie tells us, “she’s quite hot but still listening — not super crazy!”, and today, she was able to channel her considerable pizzazz into a four-star personal best of 24.5, allowing the Germans to snatch the merest of leads in the last session of the day. 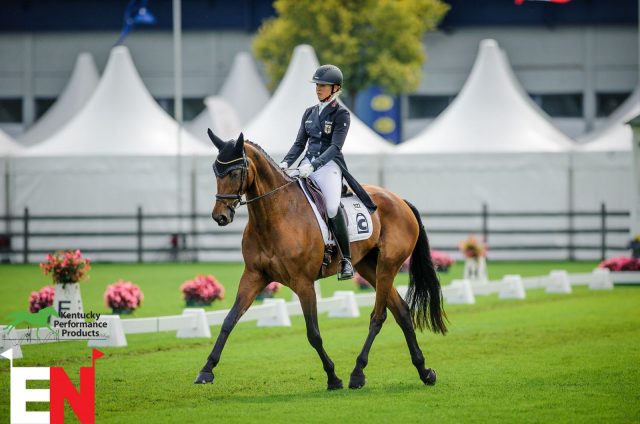 “I wasn’t expecting a score like that at all,” says Sophie, who made her own way into the global spotlight last season when she piloted the Trakehner stallion Sweetwaters Ziethen TSF to victory in the Seven-Year-Old World Championship at Le Lion d’Angers. But although she’s evidently a dab hand at sympathetically producing young horses, and possesses a quiet, effective riding style that’s not dissimilar to that of her mentor Ingrid Klimke, 34-year-old Sophie is still a relatively fresh face on the German circuit — and Jadore Moi is her first upper-level mount. (Not wholly relevant but still interesting is that a 24-year-old Sophie did her first-ever FEI competition aboard none other than SAP Hale Bob OLD, then in the early stages of his own career. They grow up so fast.) Together, Sophie and Jadore Moi’s marks have tipped as low as 22 at three-star, and they’ve been consistently improving at four-star, too: they’ve gone from scoring around the 29–31 mark to dipping down to 25.1 in their last run at Arville CCI4*-S, finally hitting top form at the long-awaited return of Germany’s crown jewel equestrian fixture.

“We both got better and better this year in the dressage,” says Sophie. “She gets more relaxed and more concentrated with every competition, but with this atmosphere I thought she could be a bit too excited! But she was listening so well, and I could ride her the same way as I could at home.”

This year, the eventing dressage has moved from its former location in one of the stadiums to the springy, grassy driving area, which has presented its own unique set of challenges — though it feels quite and separate from the hustle and bustle of the show, it backs onto the cavernous main arena, which means that last night’s arena familiarisation was punctuated by sporadic cheers and applause for the crowds who’d gathered to watch the showjumping Nations Cup class. Throughout the day, we’ve seen a number of horses bubble over with tension, either because they’ve felt uncomfortable in the midst of this unfamiliar oasis of quiet — or because they’re waiting for a nearby roar that isn’t going to come. But Jadore Moi “always wants to do her best,” smiles Sophie, and despite the difficult atmosphere, that truly showed today. 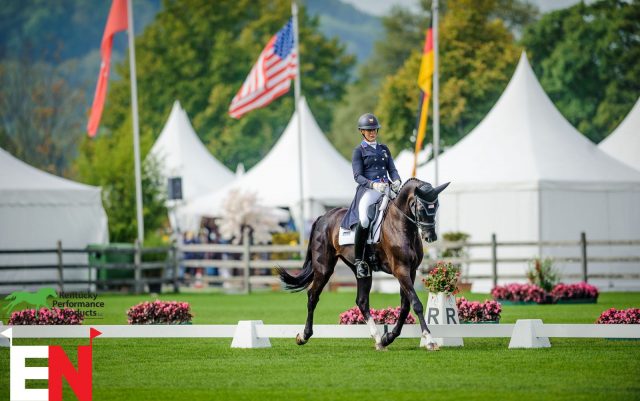 Tamie Smith and Mai Baum add an extra stamp to their passport after a jet-setting summer. Photo by Tilly Berendt.

Of course, a victory for one camp always means a sigh of frustration for another — though Team USA still has plenty of fight left in their ranks. That Tamie Smith and Mai Baum, who has been based in Germany since returning from reserve duties in Tokyo, took the lead earlier surprised nobody, and though they’ve been relegated to second place ahead of this evening’s showjumping, it’s by the merest of margins: they sit seven-tenths of a penalty behind Sophie on a 25.2, which means that the leader will have a solitary time penalty in hand over the poles.

We’re used to seeing 15-year-old German Sport Horse Mai Baum do an exceptional test: he’s posted a 20.4 at CCI4*-S this year, and a 21.8 at Kentucky this spring. Aachen’s dressage judges might not have given any free marks out today, but ‘Lexus’ made the best of the test — and the unique footing.

“The horses don’t move the same on grass, and the arena is very different than any other part [of the venue],” explains Tamie. “It’s squishier and slippier, and I knew that, so I put in a bigger stud than I would have — but I probably could have gone even bigger!”

Mai Baum gets a well-earned fuss after his test, which sees him go into this evening’s showjumping in second place. Photo by Tilly Berendt.

Though their test was nearly foot-perfect — other than a minor mistake in the first flying change — there were rather more interpretive dance moves from Lexus in the warm-up ring. But, Tamie explains, that’s just part of the process of getting great work out of the striking gelding.

“I think that’s one of the things that we, as event riders, don’t really address in the warm-up,” she says. “You’ve got to get through that stuff — it’s easy to just ride them carefully so that nothing like that happens, but then you don’t really get them through. There’s some horses you can’t do that with, but I know him so well. He just could be that percentage point better, but he’ll be like, ‘no, I don’t want to work that hard!’, so I’ve got to kick him a little bit here and there. But then you get the right feeling and then it’s all good. It’s like he’s peaked at just right time.”

Tamie opted to minimise her warm-up time to try to coax the best out of the gelding — a not unwise move, considering the difference between the feeling of the footing in the warm-up as opposed to the ring itself.

“Every event is managed differently, and you pray that you can get the formula right. I didn’t do much warm-up, which is a little bit of a risky thing because he can be a bit — like at Arville, he bolted in the canter depart, so when I was getting ready to canter I was like, ‘don’t bolt!!!’ I’m just super thrilled with him — he couldn’t have been better. He was so with me the whole time.” 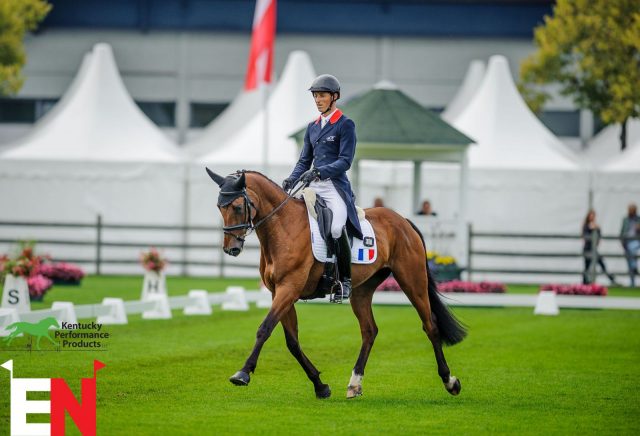 Like Tamie, France’s Gireg Le Coz opted to shorten his warm-up with his 2019 Jardy Event Rider Masters winner Aisprit de la Loge. This paid dividends for the eleven-year-old Selle Français, who earned a four-star personal best of 28.1.

“I’m very happy, and I was even a bit emotional when I saw the board,” says Gireg with a smile. “He was very good, and it was his best test ever, so this was a good day to do it! I changed my warm-up to make it quicker and shorter, and that worked really well — he was really with me. He’s a very good horse and a very good mover, but it’s about having him relaxed and focused, which he was today. When the warm-up gets too long, he just gets a bit tense and it gets too much for him.”

Instead of overworking him before the test, Gireg opted to do a longer schooling session this morning, focusing on stretching the gelding, and then brought him back out for a lightning-fast ‘proper’ warm-up before his test. The resultant lack of tension showed particularly in his improved immobility in the three halts in the test.

“He always does a good test, but sometimes I lose marks in the halts and reinback, but today I didn’t lose any points anywhere, so I’m very happy,” says Gireg.

It’s been a good day in the office so far for recent Olympic gold medallist Laura Collett, who sits fourth with Mr Bass on a 28.2 and seventh on Dacapo on  29.1.

“I was really pleased with Mr Bass; he did a really nice test, and stayed with me and tried really hard,” she says. “For a horse who finds it difficult, I was pleased with him.”

Though the high of Olympic glory hasn’t quite sunk in yet, Laura — who also has a ride in tomorrow night’s novelty Ride and Drive class — isn’t taking anything for granted as she takes on Aachen again after leading going into the final phase two years ago.

“It’s just amazing to be here — Aachen is unbelievable, and to be able to be here with two horses [in the four-star] is incredible,” she says. “It’s still hard to believe Tokyo happened, but each horse is different, and I’m focusing on these two horses this week. [London 52] was in Tokyo, and that was his job, and now it’s about these two, who’ll hopefully go to Pau — so it’s just another day in the office, really!” 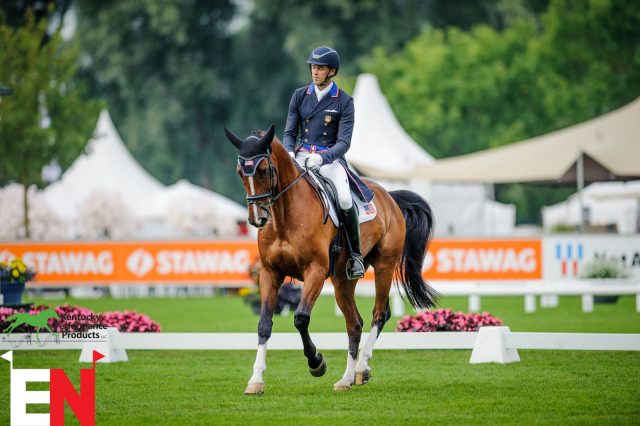 Will Coleman and Off The Record hold a close 11th place after dressage. Photo by Tilly Berendt.

Though the top two placings are in a league of their own, from a single pole covers third place to fifteenth — and Will Coleman and Off The Record sit in a very close eleventh place on 29.7 as we go into showjumping.

“There’s more in there, hopefully,” he says. “He’s a funny horse, but we like him a lot — he tries very hard, in his own way. For me, today, I just wanted to ride for a clean test and give him a confidence-building experience, and I think we did that. As he grows in confidence, I think he’ll give us more, but you can’t go faster than they let you.” 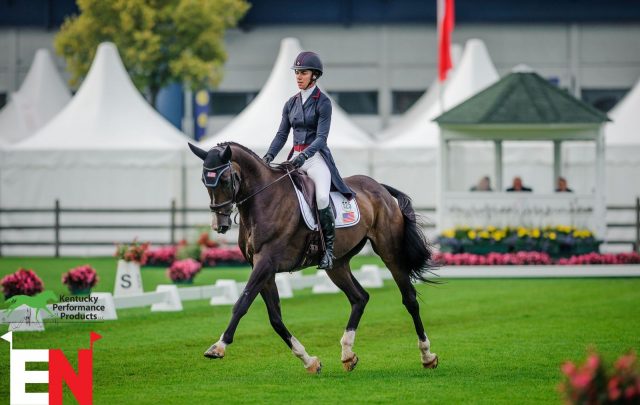 With such tightly-packed scores, there’s still plenty to play for out there, and that’ll be a welcome bit of knowledge to some of our riders, whose horses entered the arena in various versions of ‘party mode’ today: Ariel Grald‘s Leamore Master Plan, who finished third at Luhmühlen CCI5* earlier this year, looked much improved in his physical strength but suffered from tension in the ring, posting a 34.8 for 28th. 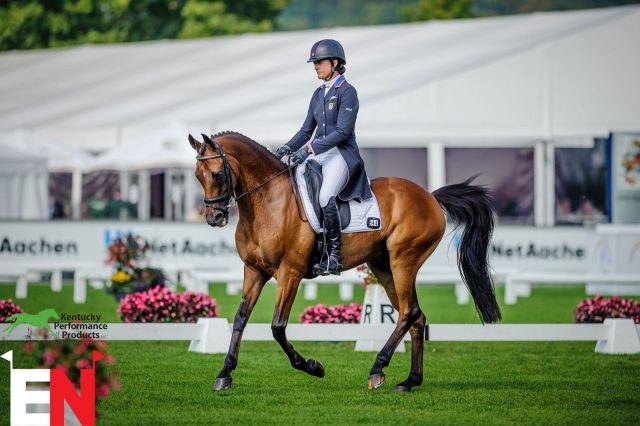 Lauren Nicholson‘s Vermiculus, on the other hand, looked to be having rather too much fun entirely, and his impressive moments were punctuated by some amateur dramatics in the changes, putting them on a 35.6 for 31st. Finally, Sydney Elliott cheerfully accepted some greenness from the good-looking QC Diamantaire — the pair, who are enjoying their first trip abroad, go into showjumping in 38th place on a 39.4. 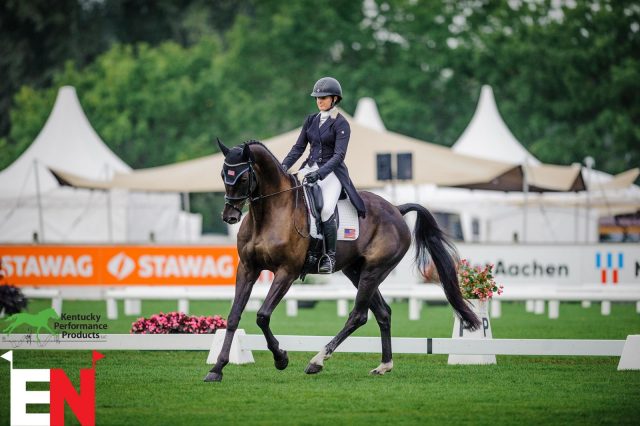 There’s no rest for the wicked here at Aachen, and we’re heading straight on into the showjumping phase now — but keep it locked on EN for more updates, image galleries, and much more from our US team here this evening! 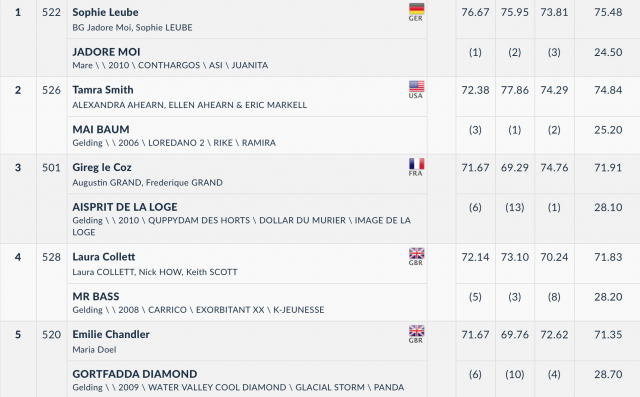 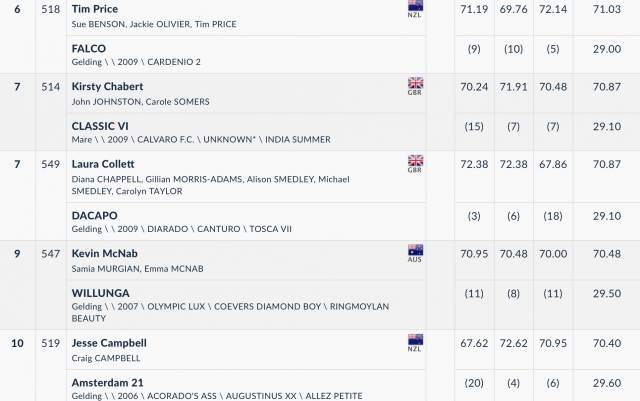 The top ten after dressage in the CHIO Aachen CCIO4*-S.