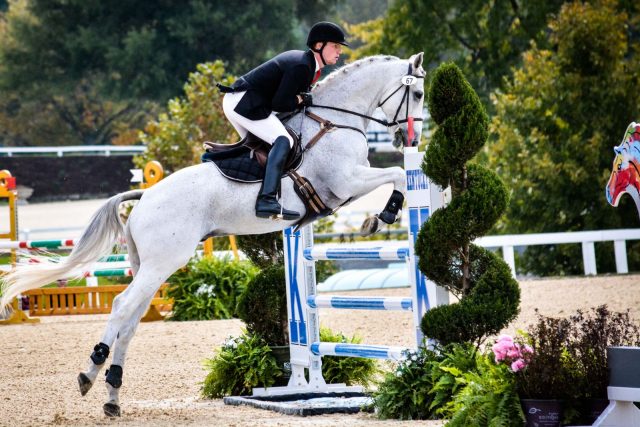 2017 was a rollercoaster year for 18-year-old Colin Gaffney of Akron, Ohio. There were the highest of highs, including a move up to the one-star level and to Intermediate plus and a top finish in a championship division; and the lowest of lows – his horse’s near-death experience due to an unexpected allergic reaction.

Colin grew up around horses – both parents also rode and participated in Pony Club. Colin’s mom, Jeni, an equine and small animal veterinarian, is still an active rider and competes in dressage at the Grand Prix level and competed in eventing during her Pony Club days.

“She likes the dressage, I like the jumping,” Colin explained.

Colin has been partnered with “Moldy” since the Spring of 2016. The now 12-year-old Thoroughbred (whose registered name is Timaru) was purchased from Canadian rider Momo Laframboise, who has remained good friends with the Gaffneys. The fungal barn name “Moldy” was bestowed upon the horse by the owner prior to Momo, who, when he got dirty, reportedly found the grey gelding to be a similar color to the mold that grows on bread, and as a grey, get dirty he often did.

Colin says that many people have lobbied him to have the horse’s name changed, but he has remained steadfast in keeping it. “It just fits him and fits his personality,” said Colin. “He’s the king of the barn and he knows it and if he doesn’t like something he lets you know.”

After an outing at Training level their first spring together, Moldy and Colin solidified their partnership at Preliminary over the rest of the season, finishing strongly with a win in the JYOP at the Virginia Horse Trials that fall.

Colin set his sights on qualifying for a one-star the following season and made it to the Virginia CCI1* last May, but nerves got the better of him and the event didn’t pan out as hoped.

“We had a bad cross country round,” he recounted. “I was really nervous because it was my first FEI event.” Colin opted to end their weekend early, retiring after a refusal.

Though initially feeling dejected, Dorothy Crowell, who coaches the Area 8 Young Riders, encouraged Colin to still try and qualify for NAJYRC. Bromont was in just a few weeks and there was time to try their hand at a one-star again there.

Encouraged to give it another shot, Colin and Moldy shipped up to Canada a week in advance of Bromont and lessoned with Momo ahead of the event. Since making the trip to Bromont was a last minute thing, Colin’s parents weren’t able to take time off of work to make it up as well.

The day after they arrived at the event, Colin and Momo noticed that Moldy had a boot-rub on his right foreleg when they took him out of his stall and that it was causing a bit of swelling. Colin called his veterinarian mother and her advice was to give some SMZs. They also presented Moldy to the FEI veterinarians on the grounds who recommended giving an injection of Gentocin, a trade-name for the antibiotic gentamicin, to get the swelling to recede in hopes of being able to pass the trot-up the next day. The Gentocin was given intravenously and Colin and Moldy were sent back to the barns to relax. 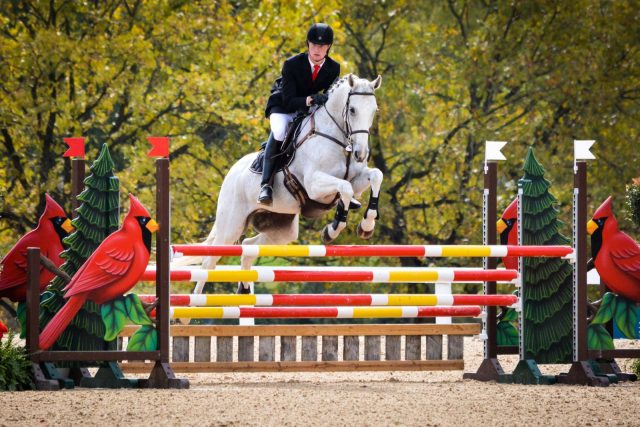 As Colin led his horse back to the barns, he started to notice that Moldy was acting a little funny, but didn’t think anything of it immediately. “He was just kind of lackadaisical and was really swinging his head while we walked,” Colin said.

Colin’s attention soon turned to himself as Moldy swung his head right into Colin’s, hitting him just above the eyebrow with a metal piece on his halter, gauging him and drawing blood. As Colin tried to tend to his own wound, Moldy began to tremor and grow weak. Colin grabbed a towel for himself and turned Moldy around in his stall and headed right back to the FEI vet as quickly as they were able. Moldy had no known allergies previously, but he was having an apparent allergic reaction to the Gentocin.

Momo was at the end of the barn aisle on the phone with one of her stable hands and when she saw Colin hurrying back toward her with a towel clutched to his head and an ataxic Moldy in tow she knew something was very wrong. Hanging up on her stable hand and dialing Jeni, she helped Colin to rush Moldy back to the vets.

“It was quite scary for me as well as Momo called to say she thought Moldy might die,” Jeni recounted.

Though the attending veterinarians knew they needed to act quickly, they initially debated administering dexamethasone, a corticosteroid commonly given to counteract allergic reactions, as it would preclude Colin and Moldy from competing in the event the next day. Fully understanding that they would surrender competing, Colin didn’t hesitate in asking the veterinarians to go ahead with the dexamethasone.

Thanks to the quick action of the veterinarians once Colin made the call, Moldy mercifully began to improve almost instantaneously once the dexamethasone was administered. After a few hours and some additional fluids, they were cleared to head back to the stabling area.

Colin was finally able to get himself taken care of later on and went to the ER to get the cut above his eyebrow stitched up, but due to a cross-border insurance snafu, he wasn’t able to get the stitches and resorted to simply bandaging it up. He still has the scar above his right eyebrow to go along with the tale.

The next day, the swelling on Moldy’s leg was almost completely gone and Colin took it easy for the rest of their time at Bromont. Two days later he had Moldy back under saddle for a hack and a little work around the competition grounds.

“Sticking around for the competition was a good experience even though I didn’t get to run,” Colin recounted. “It was really gorgeous up there and probably one of the nicest places I’ve been. It was awesome watching everyone run around.”

“All the officials and organizers were wonderful to Colin and Moldy,” said Jeni. “The vet staff saved Moldy’s life.”

When the pair returned home from their misadventure, they took it easy for a couple days and then got right back to work. Moldy was no worse for the wear by the time he and Colin headed to the Area 8 Young Riders camp where they had a blast. The next stop was Richland Park for a run in the CIC1* to get them back in competition.

“He was spectacular there and had awesome cross country and stadium jumping round. After that, it felt like we were back to where we were before.”

Next up was Stone Gate Farm Horse Trials for another confidence-building run in the Open Preliminary Division, which they won, before a move-up to Intermediate at the Maryland Horse Trials at Loch Moy in early October. Colin was decently happy with their dressage there (“It was better than our one-star at Richland”), he says stadium was a little “rough” though it was still a double clear round, but on cross country Moldy was a machine. “He was awesome, and I was awesome, and it was a good comeback from what happened earlier in the year.”  As icing on the cake, they took home a second place finish out of eighteen starters. 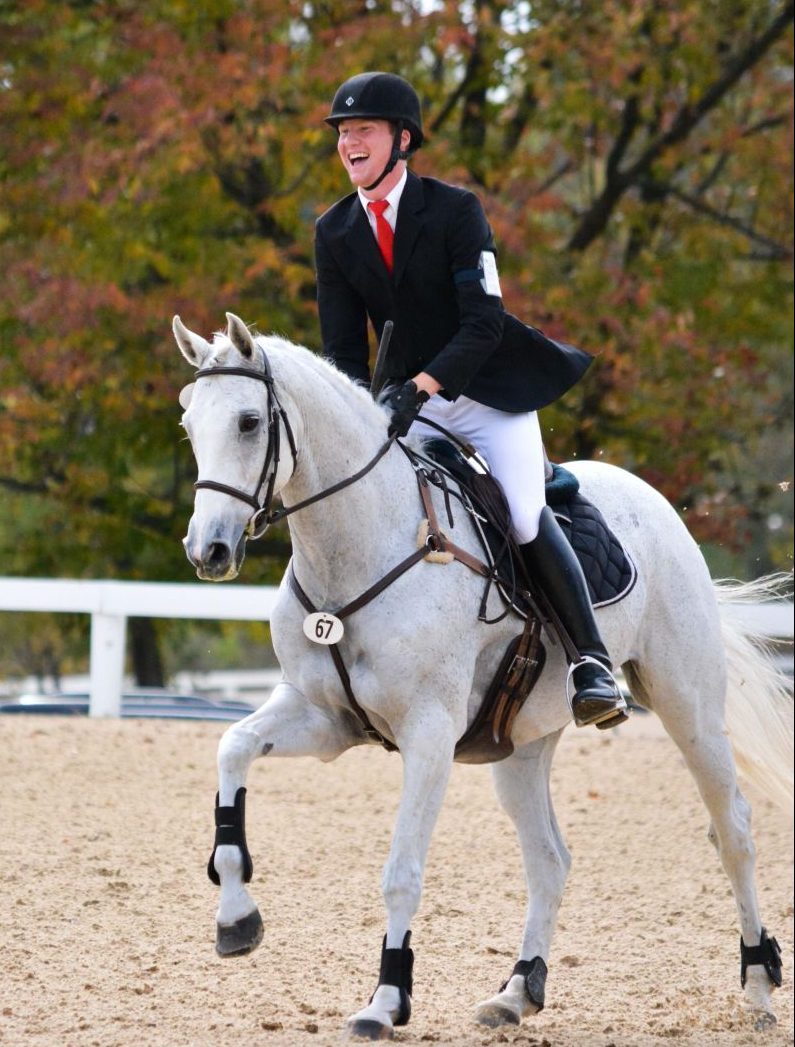 All of this led up to their final outing of the season: a take-two of their CCI1* debut at the Hagyard Midsouth Three-Day event. For all the trouble they experienced at Bromont, the trip to Hagyard was the complete opposite.

“It just went well from the start,” said Colin. “I remember after the first day just thinking how happy I was to be there because of what happened earlier in the year.”

The pair turned in a respectable dressage score and jumped double clear in both cross country and stadium to clinch a second place win in the USEF CCI1*-JR/YR Eventing National Championship.

“It was amazing how everything changed going from one event to another,” Colin recalled. “Before Bromont, it was just about going out and having fun, but now when I go out I realize how lucky I am because you never know when it’s going to change. It definitely put everything into perspective.”

“We ran into the Bromont organizer and secretary at Richland while walking the course and she came up to Colin and wished him better luck!” Jeni said. “The FEI delegates at both Richland and Hagyard also recognized them. Colin was asked at Richland if this was the horse with the allergic reaction at Bromont – it must have been a memorable experience for them!”

Moldy gets lots of time off over the winter once the competition season is done as Colin focuses on school and swim team. Colin is a high school senior and is in the process of choosing which college he’ll attend next year. He hopes to study engineering and to be able to bring Moldy with him if it works out. Until then, they have one more competition season coming up and they’re planning a do-over trip to Bromont.

Special thanks to Miranda Akins of Photography in Stride for the lovely photos!