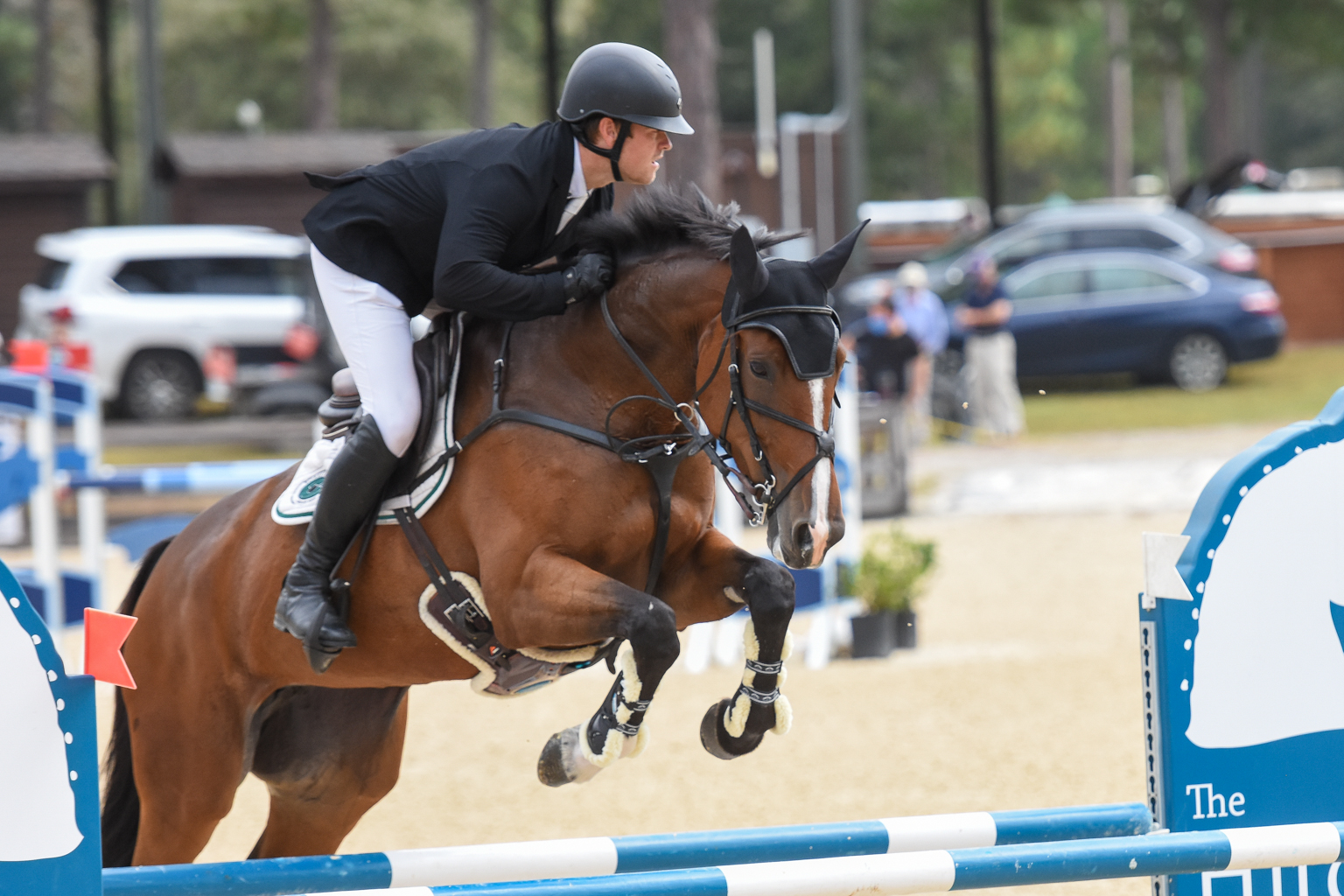 After an influential show jumping phase, Alex O’Neal has taken control of the CCI3*-S class at Stable View Oktoberfest with Miss MoneyPenny V.

This pair was on track to win the three-star at Chattahoochee Hills in Georgia last month, but two rails knocked them out of contention. Today’s double clear round felt like redemption.

“I was pretty upset about that because I thought she jumped great at Chatt and I just didn’t do her any favors,” Alex said. “Today she was really wild in warm up which had me a little worried because she’s usually pretty quiet. But she really used it to her advantage and jumped really careful and bold.”

Alex has nothing but praise for this classy 8-year-old Anglo European (Talan x Dime, by Irco Mena), who is owned by his mother-in-law, Sally Cox. They were one of 12 pairs to jump clear in this division.

“I thought it was really hard. I think Chris Barnard has been building really technical tracks this fall and kind of caught us all off guard because they aren’t very big when you walk them, but you start watching horses go and you can’t get away with making a small mistake or changing your line. I think he’s doing a good job of making sure we’re on our toes and riding like show jumping riders and not just event riders,” Zach said. 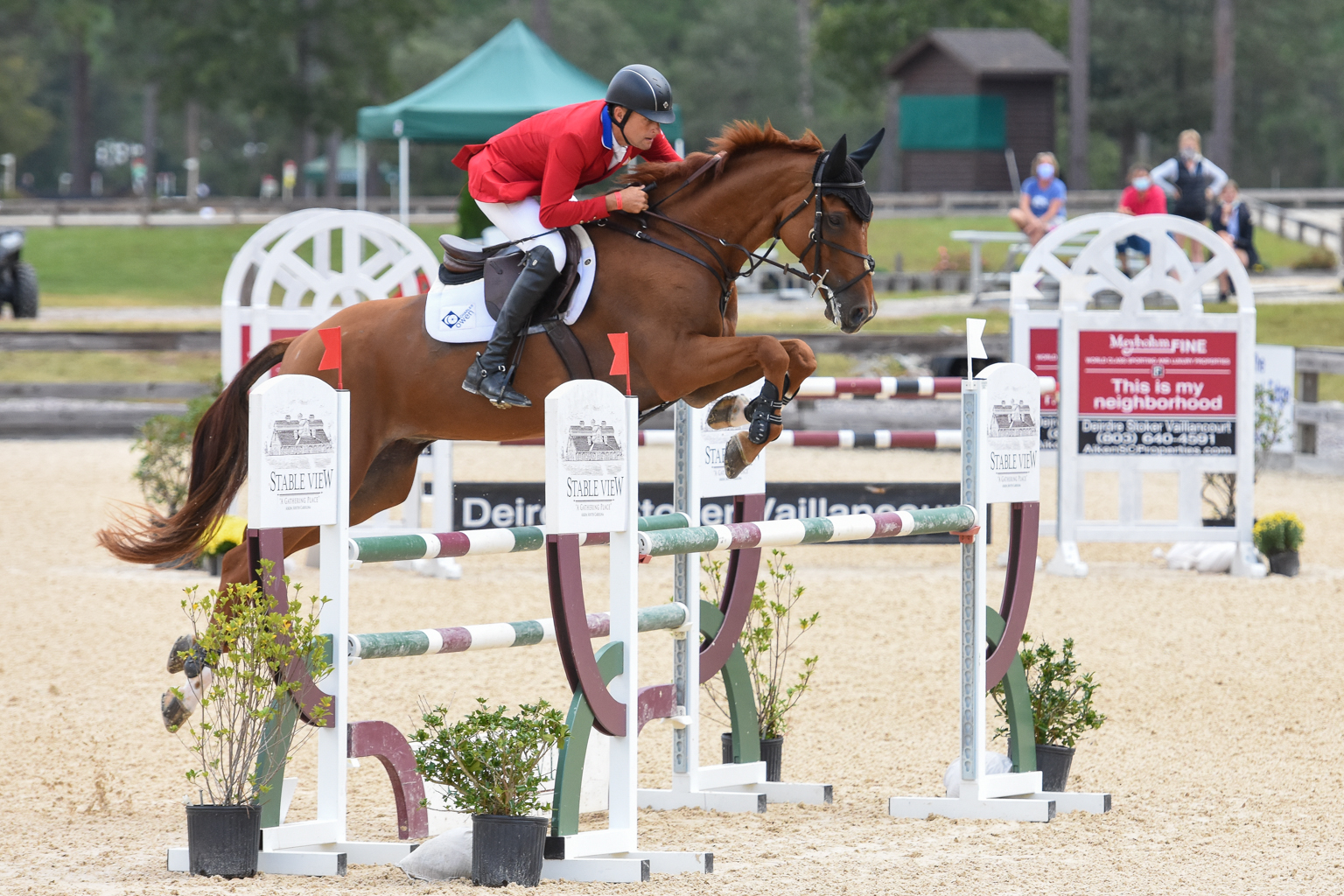 Boyd got ride on Fernhill Prezley, Heidi White’s 10-year-old Irish Sport Horse (Aldatus Z x Killerisk Diamond, by Gildawn Diamond), last fall and most recently the pair took first in the Horse Park of New Jersey CCI3*-S over the summer. So far this weekend, he’s on a score of 29.4. 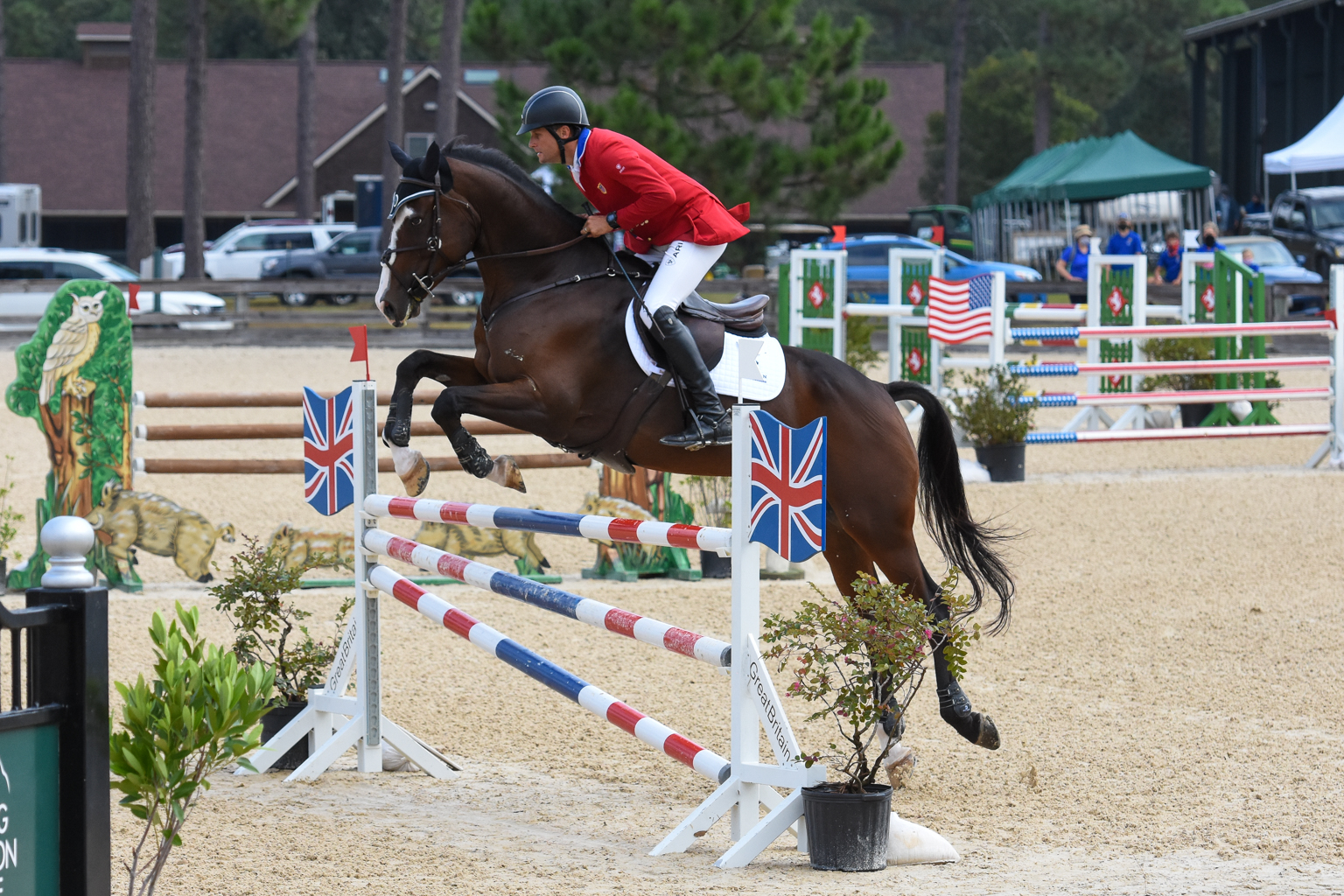 Hallie Coon and her own Cooley SOS, a 9-year-old Irish Sport Horse (Emilion x Dalways Courage, by Courage II), are in fourth after a clear round kept them on their dressage score of 30.4. 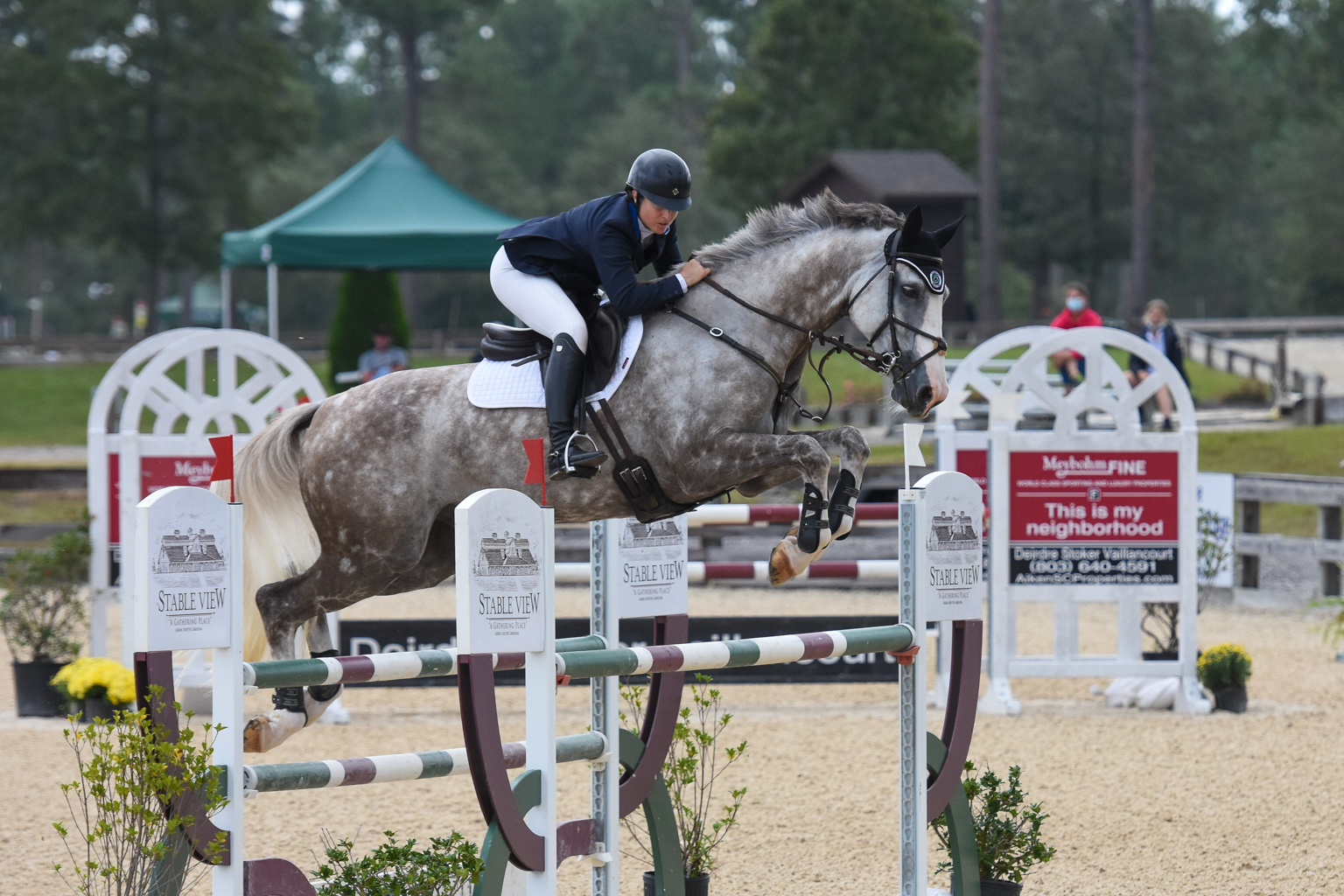 Fifth place is a shared tie between Sydney Conley Elliott with Commando D’ Osthuy and Kurt Martin aboard D.A. Liftime on a score of 31. 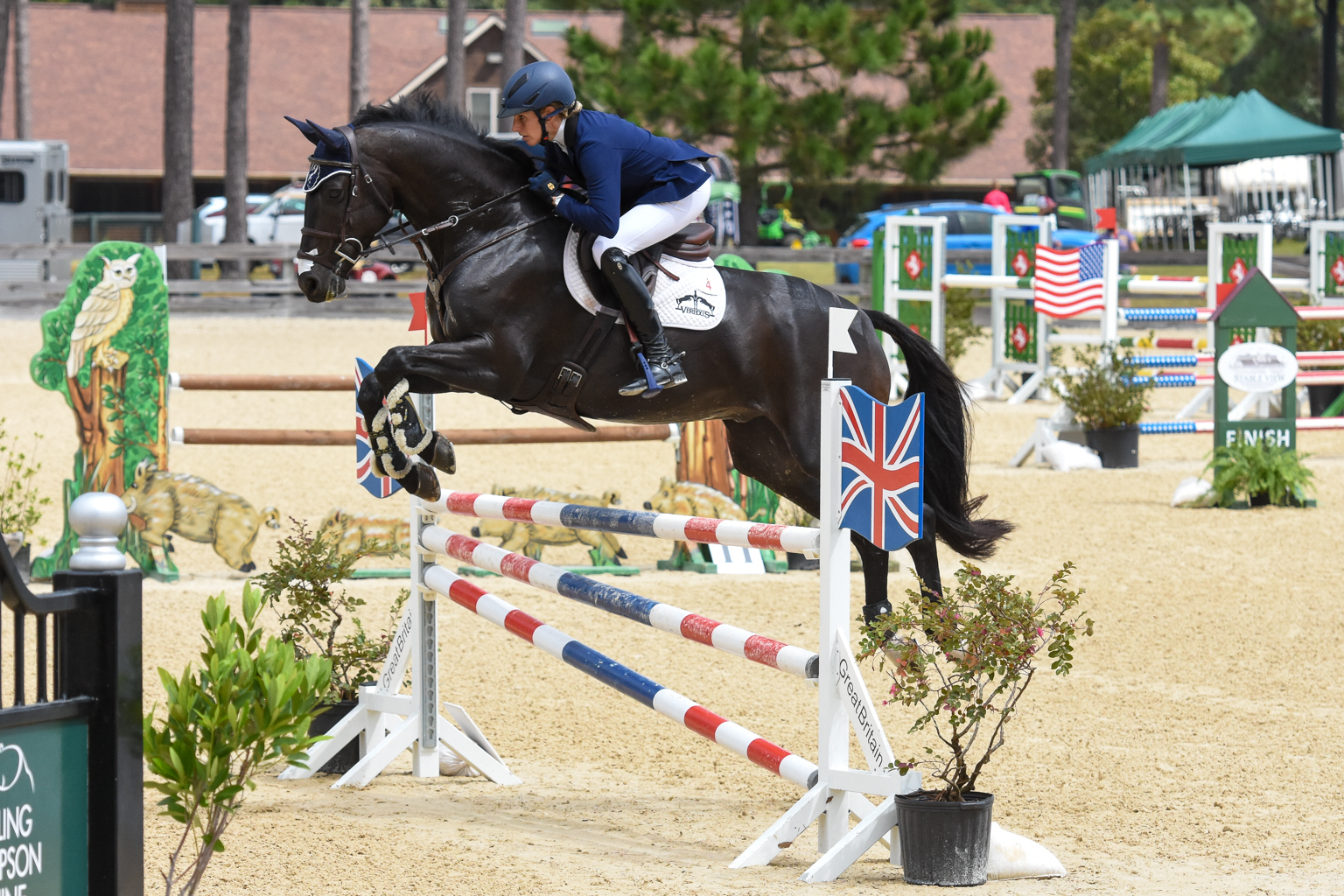 Liz Halliday-Sharp and her own Maryville Sir Henry continued their domination of the CCI2*-S division after the second phase. They jumped clear to keep a score of 27.4. Liz got the ride on this 7-year-old Irish Sport Horse (Sir Shutterfly x Pennies Royale, by Cavalier Royale) from Erin and Robert Kellerhouse in California. With Liz, he’s won his last three outings at the level.

Kelly Prather and Catch Me Cooley jumped clear for second place on a score of 28.9, and Leslie Law took third with Tout De Suite on a two-phase result of 30.5.