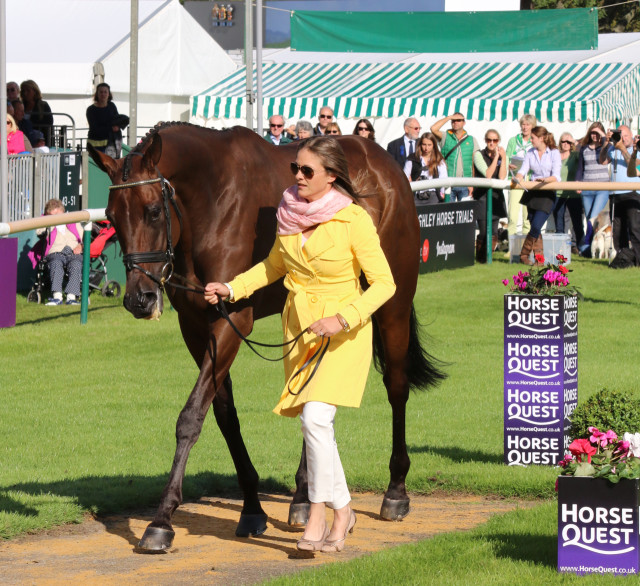 All the horses presented at the First Horse Inspection were accepted, including of course our three U.S. pairs Lynn Symansky and Donner, Laine Ashker and Anthony Patch and Colleen Rutledge and Covert Rights. 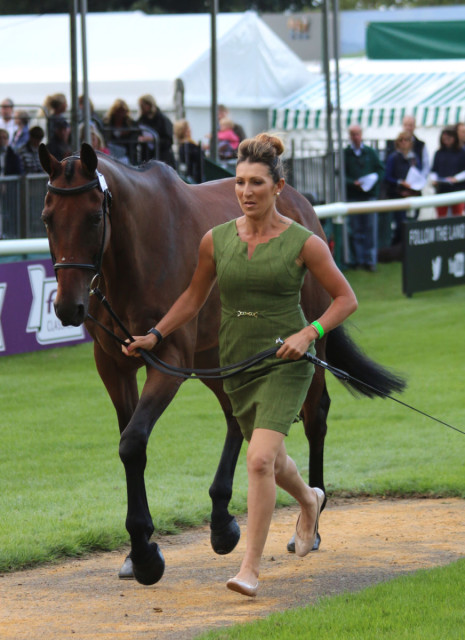 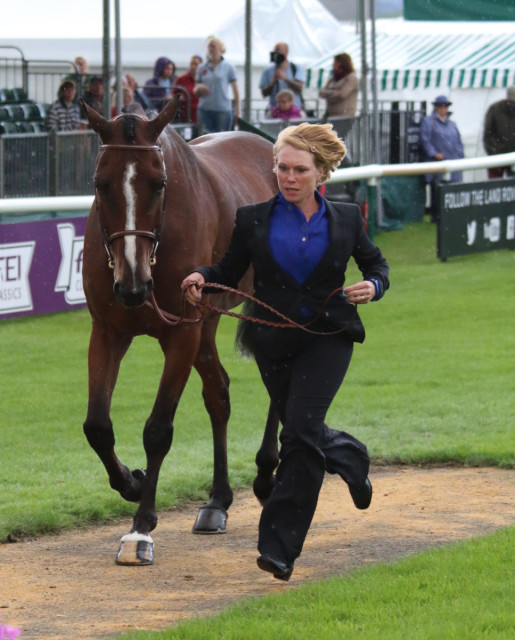 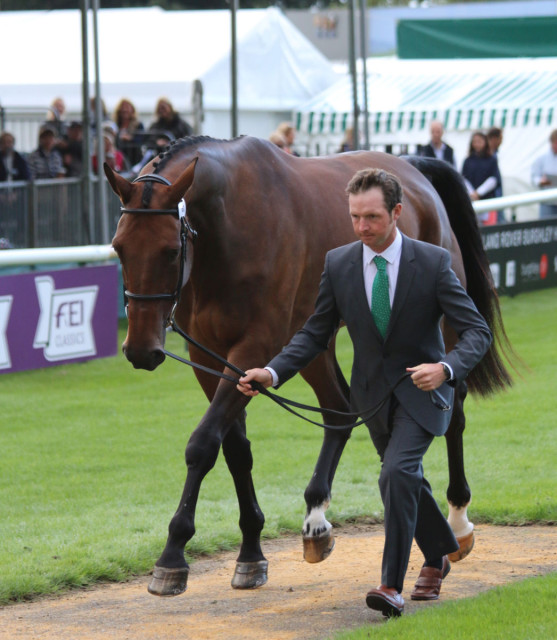 Winners of the Best Dressed were Andrew Hoy (it’s the shoes!) and Georgie Spence who did well to control a very fresh Wii Limbo. 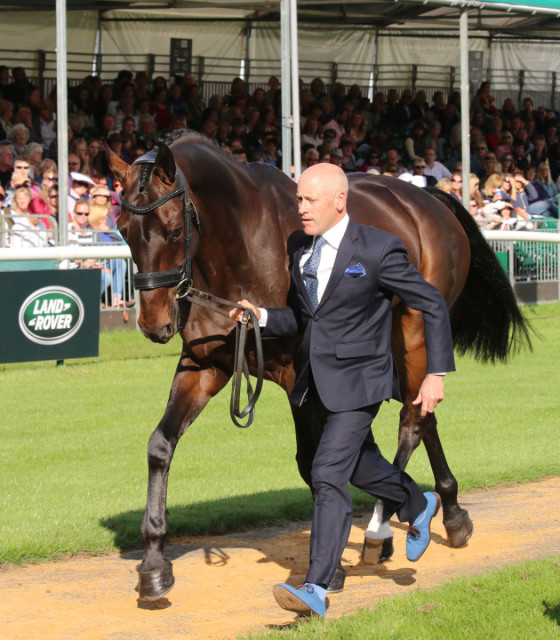 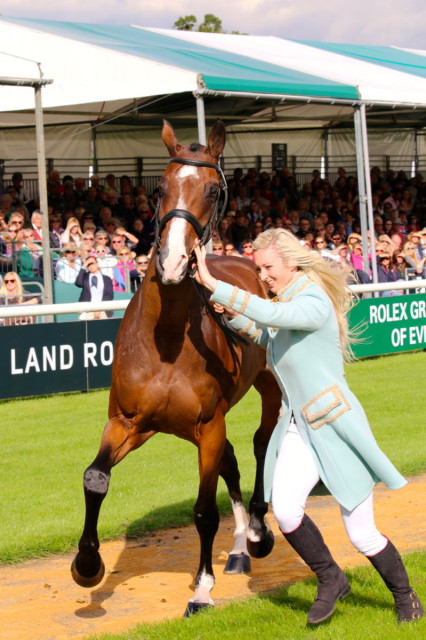 Six horses were asked to trot up twice — Lynn Symansky’s  Donner, Tom Crisp’s Coolys Luxury, Murray Lamperd’s Under the Clocks, Simon Grieve’s Cornacrew, and both Matthew Heath’s The Lion and Willa Newton’s Newmarket Vasco One were sent to the holding box. 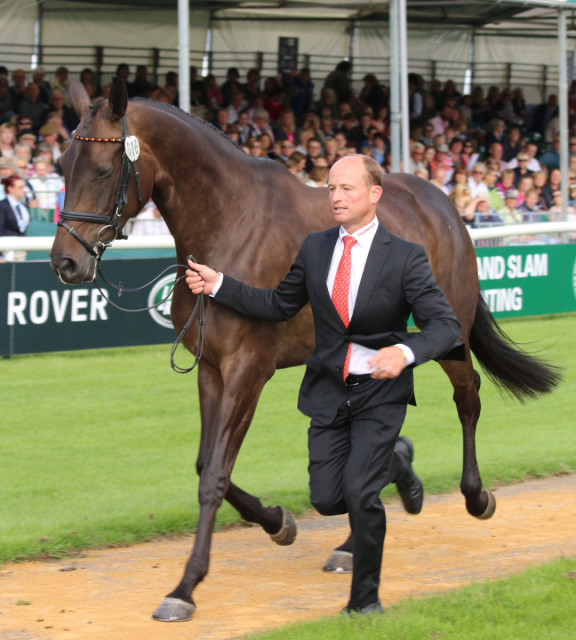 Michael Jung and Fischerrocana FST – the before picture. Photo by Samantha Clark

There was sympathetic giggling after the Ground Jury pointed out to Michael Jung that his fly was undone right before he went to trot La Biosthetique Sam (his second horse); he took it incredibly well and sailed through the Inspection with both Sam, smiling, and Fischerrocana. 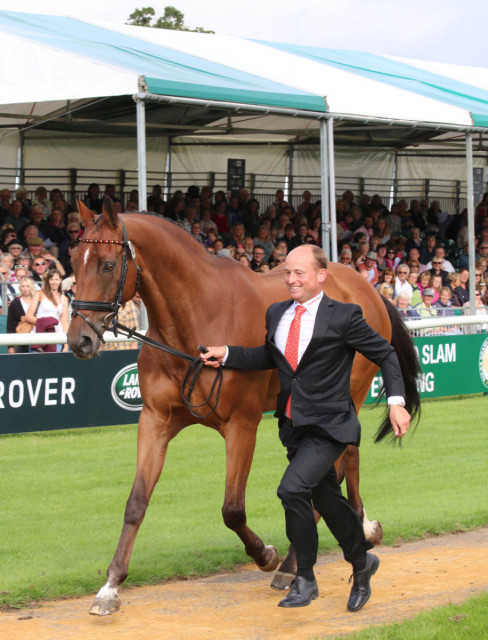 Michael Jung and La Biosthetique Sam – the after picture!

The French men were outfitted in red trousers and team jackets, and both jogged gorgeous grey (white) horses; we imagine that Rodolphe Scherer’s Makara De Montiege has some arab in her breeding! In the programme she’s listed as a 15 year old mare by Be Bop III, dam sire Hospodar. 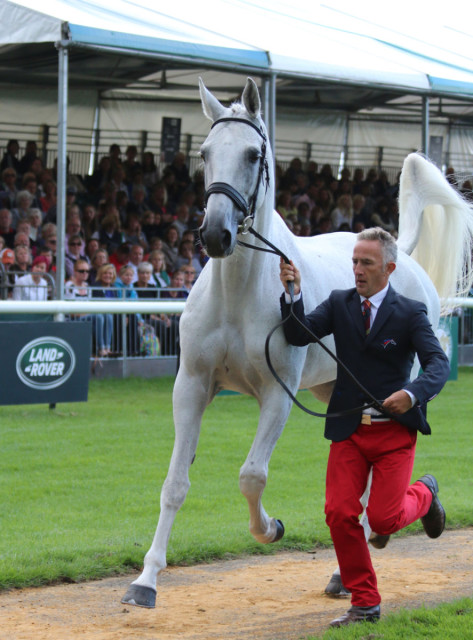 Another impressive grey today was Paul Tapner’s Kilronan who floated down the runway. It was an Inspection of two seasons — we started under sunny skies and it was positively warm, and by the time Colleen jogged near the end the temperature must have dropped more than ten degrees and naturally it was raining!

Welcome to Burghley, although the forecast for the rest of the weekend is good – cool but dry, perfect eventing climate, and the footing is about spot on too. Priorities!

Dressage starts at 9 a.m, tomorrow with the test ride, Dani Evans on Raphael II, and Oliver Townend will kick off the competition proper at 9:30 a.m. local/4:30 a.m. EST with the first of his three rides, Dromguhirry Blue. All rides will be available on demand throughout the day on Burghley.tv.

Stay tuned for a gallery of photos to come on our Facebook page soon, and Go the Land Rover Burghley Horse Trials!