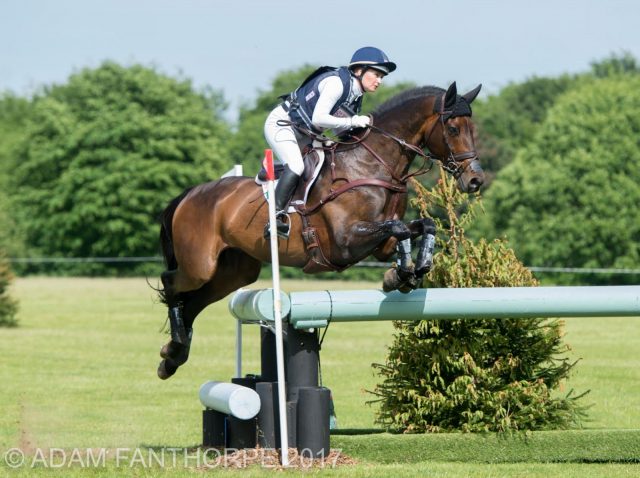 It was a thriller of a day for cross country at the Nations Cup CICO3* at Houghton Hall, and we’re proud to report that all three of our American ladies stormed around a tough track today to finish double clear and inside the top 20, third overall as Team USA.

While Germany dominated the individual standings, with Bettina Hoy holding on to her overnight lead with Seigneur Medicott, followed by Julia Krajewski and Samourai Du Thot, it was our U.S. ladies who stole the show, proving that grit and determination can and will get the job done, even when the going gets tough.

Hannah Sue Burnett and Ms. Jacqueline Mars’ Harbour Pilot are our top placed Americans, finished 10th on the wings of a double clear run, a perfect confidence booster for Hannah Sue as she looks ahead to the Luhmühlen CCI4*.

“I thought the course walked nice and flowing,” Hannah Sue said. “I was excited to get out there. This morning when they started, the course really wasn’t riding as well, there was a lot of trouble. I didn’t go until later in the day so the nerves were building.”

“After Badminton, I really needed a good, positive, solid run, and there was a lot of pressure on our whole team.” 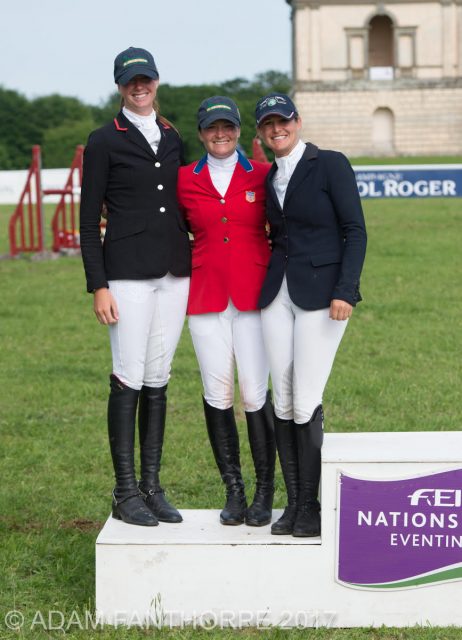 But Hannah Sue went out and did what she does best with a partner she knows like the back of her hand: she set out confidently, riding forward and aggressively, and “William” answered every question. This puts the cherry on top of a weekend full of highs, including a personal best dressage score of 37.2.

“We were knocking on the door of getting into the 30s last year, and this spring I’ve been really focused on show jumping, which has shown in our dressage scores,” Hannah Sue reflected. “Unfortunately, after Badminton I went back home, and so (Harbour Pilot) really didn’t have the best prep for this. The three rails this weekend were disappointing, but we’ve been more focused on the cross country leading up to this event and so now we’ll go back and work more on the show jumping before Luhmühlen.”

Hannah Sue credits her successes this weekend to David O’Connor, who has been a staple in her coaching arsenal, Leslie Law for his help this weekend as well as longtime show jumping coach Silvio Mazzoni, whose insights she will be putting to practice as she prepares for her next event. 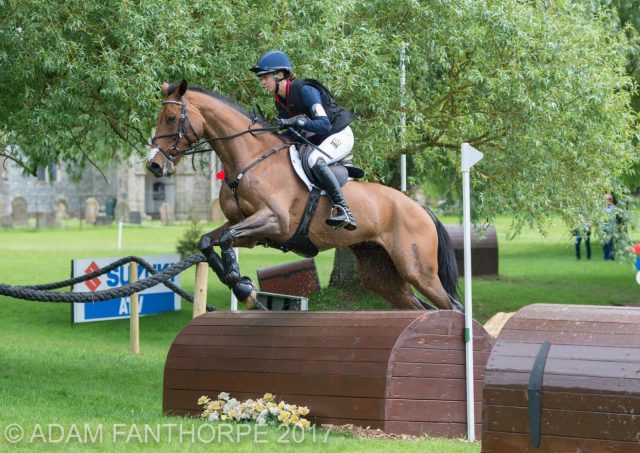 Caroline Martin finished both of her horses in the top 20, with Pebbly Maximus edging out his stablemate The Apprentice to finish in 15th and 16th, respectively.

“They were both really good this weekend,” Caroline said. “I was really pleased with their dressage, especially Pebbly Maximus who put in a personal best. I’ve got to thank Leslie for that; he’s really helped me a lot on the flat.”

Caroline was particularly proud of her show jumping with The Apprentice, who lowered just one rail but kept the rest up despite a spotty show jump record. “He can definitely have a bunch of rails, normally when he hits one he hits the rest, but he didn’t come near any others after he had the fourth fence down.”

And today Caroline showed her chops and navigated her first Nations Cup cross country course double clear on The Apprentice, despite being held halfway around for about eight minutes.

Looking ahead to her next start, the CCI3*-U25 at Bramham June 8-11, Caroline says she will be honing in the details in preparation. “I made a couple of mistakes on the flat, but I have the confidence that if I can make a few changes then I can ride a better text,” she said. “I’ll focus on the dressage but also make sure that their bodies feel good and that they’re mentally fit. They both feel relaxed and fit, so they’re ready to go. Being over here for so long has been great for them, and I’m very thankful to have had the opportunity to come.”

Caroline is also quick to thank Developing Rider coach Leslie Law, who has been with her every step of the way during this trip, and has also lent a hand to the other U.S. riders competing this weekend. “Leslie has been huge, I really have to credit him for getting me to my first Nations Cup,” she said. “He’s put the belief in me that we can do well. All of us went double clear who were on the Nations Cup team today, and I think he has to be credited with that.” 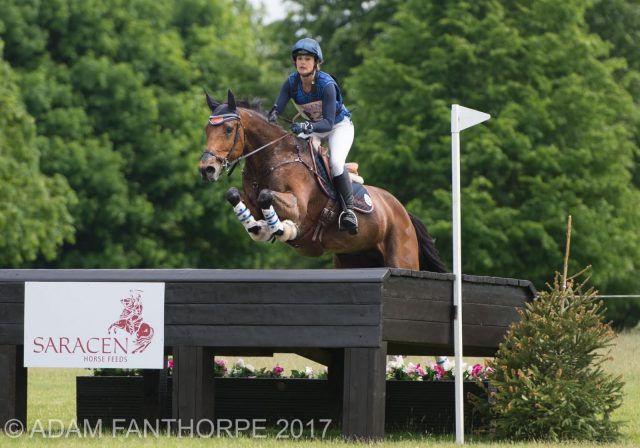 Katherine Coleman, another re-route from Badminton with Longwood, also had a smashing day today, finishing double clear today to take home 20th place individually. This pair is seeking their first CCI4* completion as they, too, look ahead to Luhmühlen next month, and today was certainly the last little boost of confidence that they needed after their Badminton weekend came to an early end.

“I’m so pleased with ‘Woody’,” Katherine said. “I was a bit nervous about cross country after Badminton. I have never fallen off of him before and he has never gone down so I didn’t know how it was going to affect his confidence. The course was causing a lot of problems, but he absolutely flew around like a little champion!”

Katherine now feels ready for her next start at Luhmühlen and will be marking down this weekend as one for the memory books. “It was so fun to be a part of the team with Hannah Sue and Caroline; they are great girls and super competitors.”

And we would be remiss not to mention another American competing this weekend! Andrew McConnon, who has spent the last year in the UK working for William Fox-Pitt and Pippa Funnell, competed in the CCI1* this weekend, finishing in the top 30 aboard Andarilho, a 12-year-old Thoroughbred gelding owned by Carol Egan.

Andrew has had the ride on “Andre” since March of this year, and this weekend marks the gelding’s FEI debut. They added just one rail to their score, ending the weekend on a final score of 53.7. 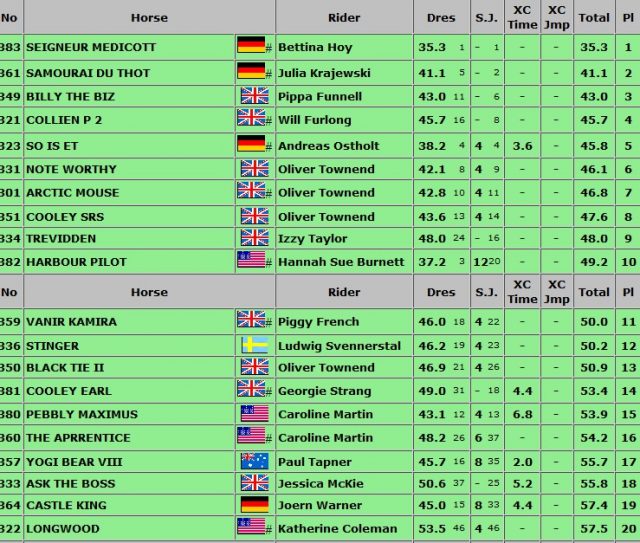 Not to be forgotten, the CCI3* at Saumur came to a conclusion today, and Switzerland’s Felix Vogg were able to defend their overnight lead, adding no penalties in today’s show jumping for a final score of 41.7.

Poles fell throughout the entire division, but none quite as costly as the two lowered by Michael Jung and Lennox 364, who amassed nine penalties to finish in fifth place. This was Lennox 364’s first CCI3* and we look forward to seeing what else is in store for this young talent in Michael’s string!

Finishing in second position overall were Donatien Schauly Adj and Pivonine Des Touches, a 14-year-old Irish mare, representing France. This pair also jumped one of the four double clears inside the top 10 today, boosting them from fifth following cross country on a three day score of 48.0.

Rounding out the top three are Sir Mark Todd and Kiltubrid Rhapsody, who lowered one rail but were able to retain their third placing on a final score of 49.1.