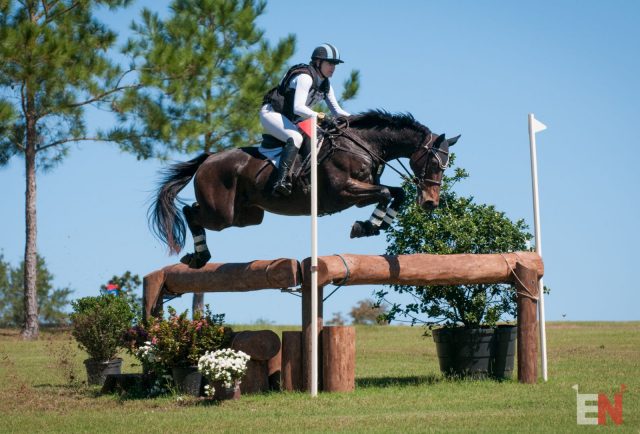 Kelly Beaver is not a professional event rider. She’s an adult amateur who works anywhere from 50-70 hours a week at a job completely unrelated to the equine industry. She rides after work and on the weekends. Her husband and mom are her assistant trainers/ grooms/ videographers. She competes with just one horse, and in their Advanced debut at Stable View Oktoberfest H.T. they finished 10th out of 32 competitors in a division contested by some of the biggest names in the sport.

A lifelong rider, Kelly started out riding hunter/jumpers in Middleburg, Va., before she made the switch to eventing (“which was the best move ever,” she says) upon moving to Pennsylvania. She competed through Training level before having to sell her horse to leave for college. Two years after graduating, she purchased a new horse with the intent of eventing again and maybe even getting to Prelim.

“That horse had a lot of talent, but not a lot of heart,” Kelly recalls. They did manage to complete one Prelim event, but anything more just wasn’t in the cards so Kelly decided to search for a new equine partner. 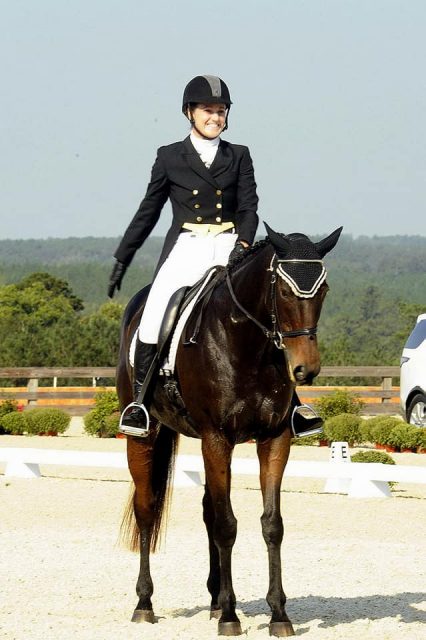 Kelly wanted a more experienced horse and, due to her demanding job, wanted a Thoroughbred that would be much easier to keep conditioned. In 2005 Kelly purchased Sempre Fino, a then 10-year-old Thoroughbred, through her current trainer Courtney Cooper. “Hobbs” had experience up to the CIC2* level with his former rider Charlotte Freeman. Kelly purchased Hobbs with aspirations to compete at Preliminary and hopefully a one-star, but as their partnership blossomed and Hobbs continually stepped up to the plate they’ve been contesting Intermediate, CIC2* and CCI2* events for the past few years.

It’s a huge accomplishment to ride at the upper levels, particularly for an amateur, but Kelly’s success is extra impressive after learning that she’s achieved this while working full-time at a very demanding job with an inflexible schedule.

Kelly and her husband Seth keep their horses at their own farm in Elverson, Pa. Seth had never ridden before he met Kelly, but had always been an athlete and an animal lover. Enticed by the thrill of cross country, he decided to get into eventing, too, and now competes at Training with his horse, Mr. Bojangles. Together, they comprise Beaventing.

“After we got married, it was clear that horses were still a big part of Kelly’s heart,” said Seth. “It was an easy decision to bring horses back into her life. I quickly saw the amount of time and dedication having and competing horses entailed and figured that I better start riding or we wouldn’t be spending much time together. When I started, I was hooked and never looked back.”

In addition to being a fellow competitor in the sport now, Seth is also Kelly’s super groom both at home and at events. On days where Kelly works late Seth takes care of Hobbs’ fitness work and keeps the farm running. The couple tries to get out to Courtney Cooper’s C Square Farm for jump lessons every two or three weeks, and particularly before events, or as often as possible pending Kelly’s work schedule. They are also fortunate enough to have a dressage trainer, Cindi Stephens, who lives five minutes from their house and accommodates their busy schedules and also helps to keep the horses exercised when the couple is away for work. 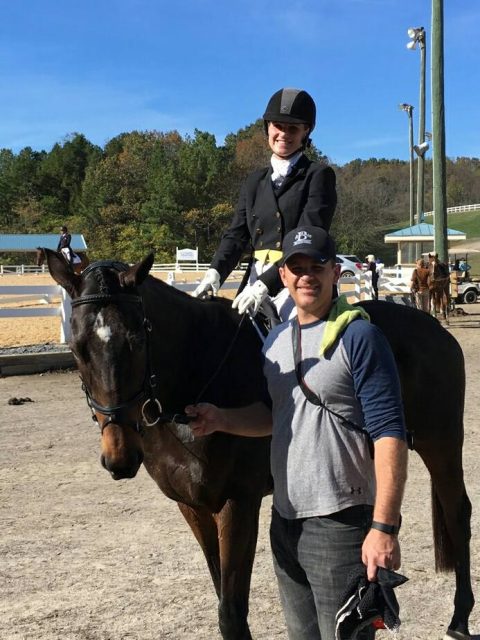 Kelly and Seth at Virginia in 2016. Photo courtesy of Kelly Beaver.

Like many of us, Kelly once had dreamed of riding in the Olympics. Her path took her to college instead, where she pursued an Engineering degree and played collegiate softball. Though the Olympic dream was put on hold, she still maintained her desire to compete at the upper levels.

“Sometimes I wonder, what if I hadn’t gone to college and I had gone to be a working student instead? Maybe I’d be further along in my riding, but on the other hand I wouldn’t have met my husband and we have an amazing farm which we wouldn’t have otherwise.”

Kelly’s competitive spirit is what fuels her success both in her professional life and in riding. It’s what drives her to be the best she at her job and to keep climbing the levels in eventing.

“I want to prove that just because I didn’t choose riding as my profession, doesn’t mean I can’t do it, too.”

Her success at the big season-ending FEI events, however, has been a mixed bag due to a series of unfortunate ailments that have plagued Hobbs at the most inopportune times: an abscess and boot rubs at Plantation Field 2014, a random leg infection the morning of the first jog at Fair Hill in 2016, and sore feet and a failed second jog at Virginia CCI2* that same year despite sitting in second after cross country.

“It is extremely demoralizing not to be able to finish on a number and to have to head home early, especially when you only compete with one horse,” Seth says.

After a winter of training and discussion with her trusted veterinarian Dr. Kathy Anderson of Equine Vet Care, Kelly decided to keep the now 17-year-old Hobbs focused primarily on non-FEI competition with maybe the odd CIC thrown in since Hobbs was having difficulty passing jogs due to his thin hoof walls.

“When I was younger I dreamed of the jog, but now I dread them,” Kelly laughs. “Hobbs is such a sensitive creature and he’s very quirky when something is off, but he’s very low maintenance otherwise. Kathy has been a reliable trusted resource and friend for many years. She is always there for us when we need her and she knows Hobbs so well and has helped us navigate through the ups and downs.”

Kelly landed a new job this May as the Vice President of Engineering and Operations Support at a large Pennsylvania-based utility company. It was a big step up in her career, and another component of her life that she’s worked very hard for, but it meant working even longer hours than she already did. Due to this and other reasons, her 2017 event season started late and the overall schedule was completely up in the air.

“Getting into each show was very last minute and involved Seth calling up the secretary and begging to get in. Mary Coldren was a life saver although she probably cringed when she saw ‘Beaver’ calling,” Kelly says. “We just didn’t know our schedule in advance.”

This season, they began by running at Prelim — a level both horse and rider are very comfortable at — before returning to Intermediate. They contested the CIC2* at Plantation and finished 15th, the third highest placed amateur, out of 55 starters.

In years past Kelly and Hobbs had both struggled with show jumping — Hobbs has an unorthodox jumping style and it’s not Kelly’s favorite phase, either — but it began to come together for them earlier this year with continuing work with Richard Picken and Courtney Cooper. There had been no doubt in Kelly’s mind that Hobbs could take on a blue-numbered cross country course, but their performances over the colored sticks had kept Kelly from moving up to Advanced.

“One of my insecurities as an amateur is feeling like I don’t belong. I didn’t want to embarrass myself by taking down a bunch of rails,” Kelly says.

Now that the pair was leaving the majority of the poles in their cups, Kelly looked forward to giving it a go at Advanced and Courtney recommended Stable View as a good option for the big move up. But would all the pieces fall into place? 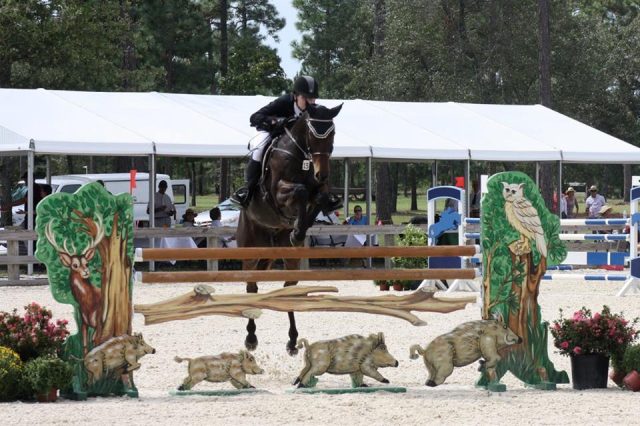 Whether amateur or professional, what every eventer seeks to do over the course of all three phases is have everything come together. It’s on those weekends where everything falls into place in each phase that we know our horse and ourselves have performed to our highest potential. But, as we all know, keeping it all together during all three phases is no easy feat and when you only have one horse in the game, as is the case for many amateurs, the pressure of performing well can be compounded.

“I ride one horse because that’s all I have time to ride. If I get on course and I don’t ride something right then I don’t get another shot,” said Kelly. “So when it does go right, it makes it so much more special for me, but I don’t get a lot of mileage at each event.”

Out of all the other shows this year, Kelly considers this run at Stable View to be the one where everything came together in the best possible way. Kelly and Hobbs put together a very respectable dressage test and added only one show jumping rail to lie in 18th position going into cross country. They added 12.4 time penalties on a course where no one made the optimum time and moved up to 10th to finish up among eventing’s household names.

“Our partnership is so strong, we just know each other so well. On cross country it felt like there was nothing he couldn’t do and it was really fulfilling to get through that with him because at 17 years old I don’t know how many seasons we have left.”

Kelly’s tenacity proves that it’s possible to make it as an amateur at the upper levels, but it’s certainly not for the faint of heart or those lacking commitment. Her biggest piece of advice for fellow adult amateurs looking to be competitive is to surround yourself with a solid support team that understands your goals and limitations and truly cares about you and your horse’s well-being.

“Because it’s not my job, sometimes I wonder to myself, why do I keep doing this? Then you have those shows where everything clicks and make it worth it,” she says, “but you need those people that support you to get you through the tough times.”

“There’s no way I could do what I do without my husband and my mom. My husband is there for me at all times and has seen me at my worst, and he’s surprisingly stuck around. Trust me, it can be scary when I have a bad ride the week before a big show!”

“My mom has never stopped believing in my riding dream and never will. She is the person that makes me feel like I can never fail and she was the one that supported my habit while growing up even when she really didn’t have the resources to do so. They are my biggest supporters.”

So what’s next for Kelly and Hobbs after this banner year?

“He’ll be 18 next year, so we’ll do whatever feels right by him,” Kelly says. “We have a strong partnership, a team of people who have known him intimately for seven years and we’re on a program that’s working. The team that we’ve built around him — Courtney, Kathy and our farrier — will all make the right decision by him. He owes me nothing.”

Be sure to check out this video of Kelly and Hobbs dominating the Stable View course, and hear how emotional her mom gets at the end!