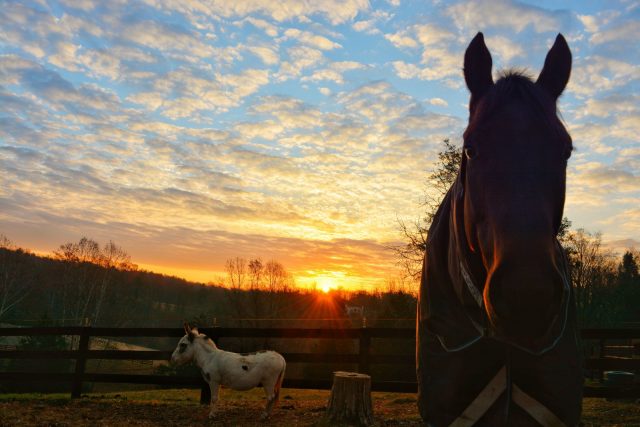 G’morning Turkey! (And less than enthusiastic Pepe too). Photo by Kate Samuels.

I’m super excited to say that I’ve decided to apply to participate in the Retired Racehorse Project for 2018 with my newest pony, Turkey. He had some time off that I didn’t plan, but you know, life happens, and you get busy dealing with other stuff, so last week I checked the eligibility requirements and was thrilled that he just squeaks in under the wire! I’m pretty pumped about this challenge, and I know that lots of people participate year after year, so I’m hoping to learn a lot and maybe even show off in a new and fancy way!

The round table discussion about eventing safety continues with more than a little help from the outside world. Not only do we have some of the top minds in the equestrian industry on board, but we’re getting input from Jackie Stewart from Formula One Racing, leaders from ski racing, Suzanne Smith from NASA, engineer Dave Vos from Google, Engineers Mats Björnetun and Anders Flogård of MIM Construction Frändefors Sweden, Roy Burek from Charles Owen, and many more. [USEA Safety Summit Round Table Part 4]

I don’t even need to introduce Laura Kraut or why you should read these tips from her about how to be a better rider. Did you know that when she was a kid she had to learn to ride her horses without a bridle or halter around a course of poles? She also thinks that the most important thing is to “stay in touch with your ‘why'” when existing in the horse world. Read more to find out what that is! [Laura Kraut: Finding Your Why and Three More Keys to Mental Success]

The “New World stilt-legged horse” has been identified as an entirely new genus of extinct horse. Haringtonhippus francisci fossils have been found in Alaska, the Klondike area of Canada, Nevada, Wyoming and Texas. The stilt-legged horse is described as thin-limbed and lightly built; prior to this study, the stilt-legged horse was thought to be a relative to the Asiatic wild ass or onager, perhaps a subspecies of Equus. Studying the DNA preserved in the fossil record, however, proved that Haringtonhippus francisci diverged from the ancestors of Equus an estimated four to six million years ago. [New Genus of Extinct Horse Discovered]