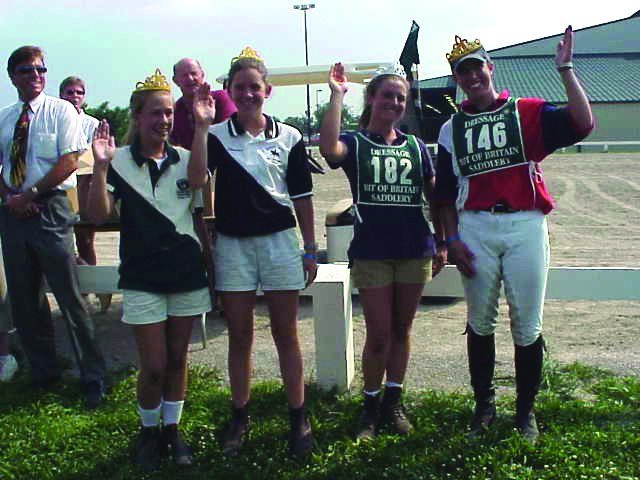 USPC Festival Dressage Queens, Class of 2001: I'm the third one from the left. Photo courtesy of Dalles Lee.

If you put two Pony Club graduates in a crowded room together, they’ll recognize one another immediately. Not because they’ve necessarily met before — maybe they have, maybe they haven’t — but because, like Vietnam vets, they are forever bound together by a shared epochal experience.

They’ve seen the other side, man. And what has been seen can never be unseen. The neurosis is buried deep, and while Pony Club may have contributed to their development as the upstanding, high-functioning adults that they are today, it also, let’s be frank, probably traumatized them for life.

Forever, ex-Pony Clubbers are doomed to battle their obsessive-compulsive tendencies: scrubbing their tack raw, wrapping and unwrapping bandages until the overlap is precisely uniform, driving everyone around them crazy with random equine facts and figures that no sane human being should have rattling around their brain. Life is hard enough with the ghosts of horse management judges past picking through the tack trunk of your mind.

Every Pony Club chapter has one in the bunch: the type-A overachiever, the obnoxiously cheerful brown-noser, the kid who is hellbent on “exceeding standard” in every manner possible. In my pony club, Tennessee Valley, I was That Pony Clubber. I brattily clawed my way up the levels, eye on the prize and nose perpetually buried in a dog-eared manual.

I earned my H-A rating with flying colors and looked forward to attending Regional Rally and Championships East each year, my annual opportunity to pulverize the competition with my supreme riding and horse management skills. In 2001, at the ripe old age of 19, I had but one score left to settle: USPC Festival.

USPC Festival is intense. Most years the national championships are broken down into Championships East and Championships West, but every three years the whole country comes together for one  week-long monster event at the Kentucky Horse Park.

It’s the World Equestrian Games for book-smart barn rats. All the disciplines are represented — dressage, eventing, games, polocrosse, quiz, show jumping and tetrathlon — and it’s quite the sight to see: 4,000 Pony Clubbers on their best behavior running around in two-sizes-too-big polo shirts, khaki shorts and spit-shined paddock boots.

When not riding, they’re studying note cards or desperately cleaning everything in sight as they are scored not only on performance but on knowledge and horsemanship as well.

To get a feel for the amount of stress these kids are under, imagine going to an event and, in addition to the usual dressage/cross-country/show-jumping phases, you’re required to take a written test and are subject to accruing penalty points for dandruff in your horse’s tail or stray shavings in front of your stall. Oh, and you’re also competing as a team with three or four other riders plus a stable manager. No pressure!

Even though the whole affair seems insane to me now, at the crest of my youth, it was totally in my wheelhouse. 2001 was to be my final USPC Festival before I aged out and my destiny seemed clear: I would represent the MidSouth Pony Club Region as a member of the prelim eventing team, and we would win because, well, obviously. There was just one roadblock: I didn’t make the team. 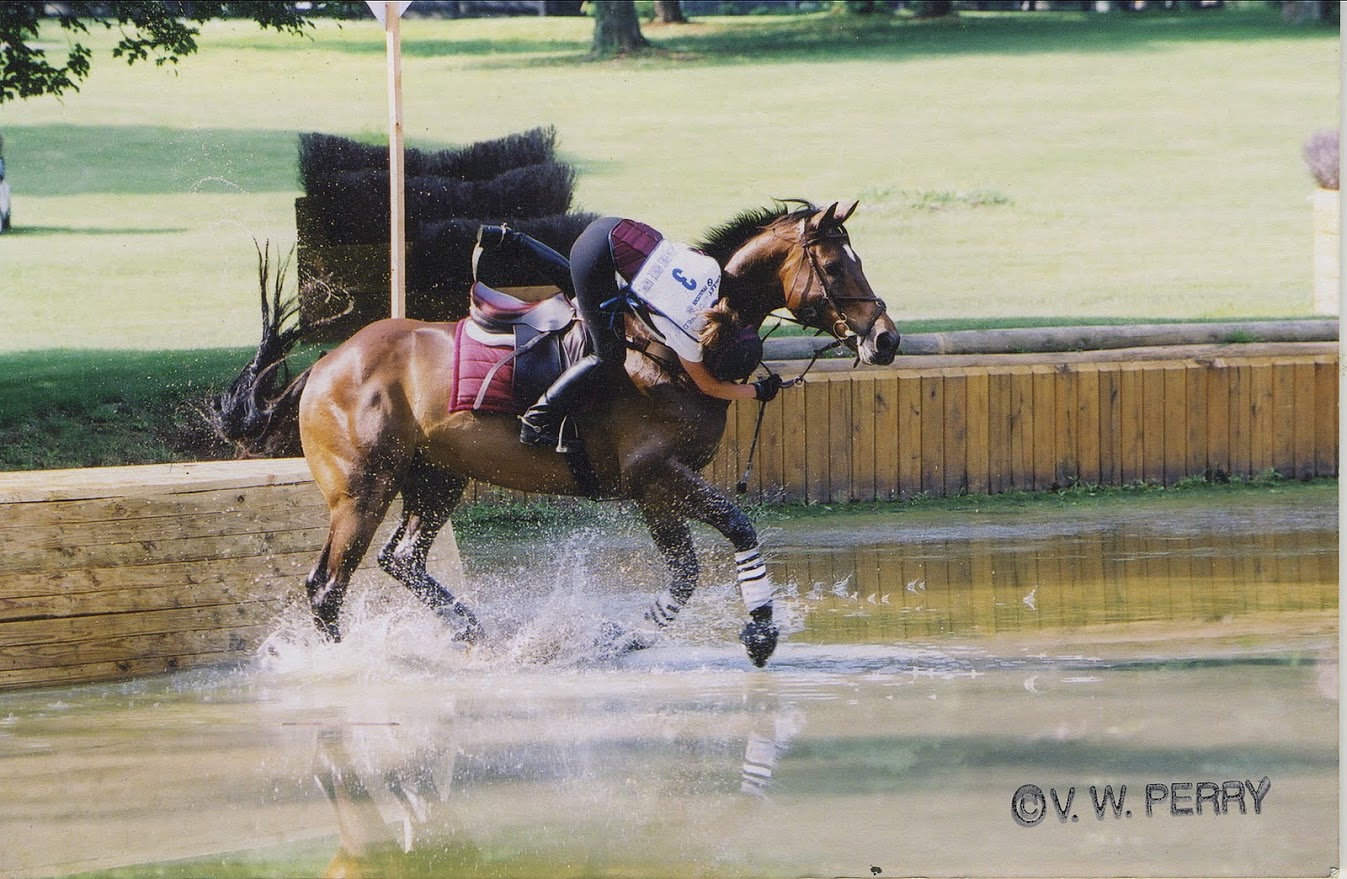 Uh, probably because this happened at Rally at the year before.

WHAT?!?!? I was devastated in the way that only a narcissistic teenager with a demented sense of reality could be. My identity was crumbling. My world was caving in. I called our District Commissioner in a panic to see what could be done. You don’t understand… this is my destiny!

Of course, since she’d had nothing to do with the team selection, it was out of her hands. She agreed to call the Regional Supervisor, and together they formulated a plan to get this whiny, sniveling, soul-crushed Pony Clubber off their backs. Their proposal: I could go to Festival… but in dressage instead of eventing. (Regional Supervisors could nominate riders to compete in the B/H-A/A dressage championship even if they didn’t have qualifying scores from Rally and USDF-sanctioned competitions.)

Like many eventers, dressage is NOT my favorite phase. Never has been, never will be. But I begrudgingly agreed and set to work under the guidance of a local dressage trainer, who psychologically beat our milquetoast flatwork into submission with his stern German accent and ice-dagger stare. We put together a Riverdance-inspired freestyle and had the music professionally edited, and ran through First Level tests 3 and 4 approximately 30,000 times. By the time July rolled around, I was as ready to go trick people into thinking I was a dressage rider as I’d ever be.

I won’t give you a play-by-play of the competition — it was not that exciting, I promise — but somehow we ended up winning the individual championship. It was a weird moment in my life, but also kind of cool: In addition to an over-sized trophy and ribbon, I received a $1,000 dressage scholarship from Iron Spring Farm and the USDF. And, most importantly, a tiara.

I’m wearing a big smile in the photo but inside I felt conflicted. To quote the Chronicle of the Horse‘s story: “Despite her new appreciation for dressage, this event competitor didn’t know how to feel when her fellow competitors presented her with a plastic tiara to signify her as a ‘dressage queen.'”

I remember acting like I was embarrassed about the win because it was “just” dressage. For weeks afterward if it came up I’d kind of roll my eyes, like, “oh yeah, whatever.” But 13 years later, I’ve still got that stupid tiara, and there’s a reason why it hasn’t ended up in a box in my parents’ garage with all of my other random horse memorabilia.

I’m more proud of it than my bratty teenage self would have ever been caught dead admitting. I think it embodies something that was, in the grand scheme of things, a much bigger takeaway from Pony Club than any ribbon or rating. It was an oh-so-gentle introduction to the real world.

Unlike Pony Club, outcomes in life aren’t merit-based. You can come at it with as much work ethic, discipline and ambition as you can muster, but things are still going to blow up in your face. On a regular basis.

You change your game plan and move on. You do the best you can and accept that sometimes it will pan out and sometimes it won’t. Sometimes it pans out in ways you don’t expect, and in those instances gratitude is the appropriate response. When you’re 19 these sorts of lessons can feel like a punch in the face, but sometimes a black eye is exactly what you need.

Since graduating from Pony Club I’ve intermittently stayed involved with the organization, teaching clinics and conducting ratings, and I even put in a short stint as a DC. I always get a kick out of comparing notes with other Pony Club grads about their lingering neuroses.

Some Pony Club pathos has left me — I’ve chilled out about cleaning tack, for instance — while other stuff, like my fear of backwards bucket snaps, is still going strong. But the most meaningful Pony Club residue is much less tangible than that. 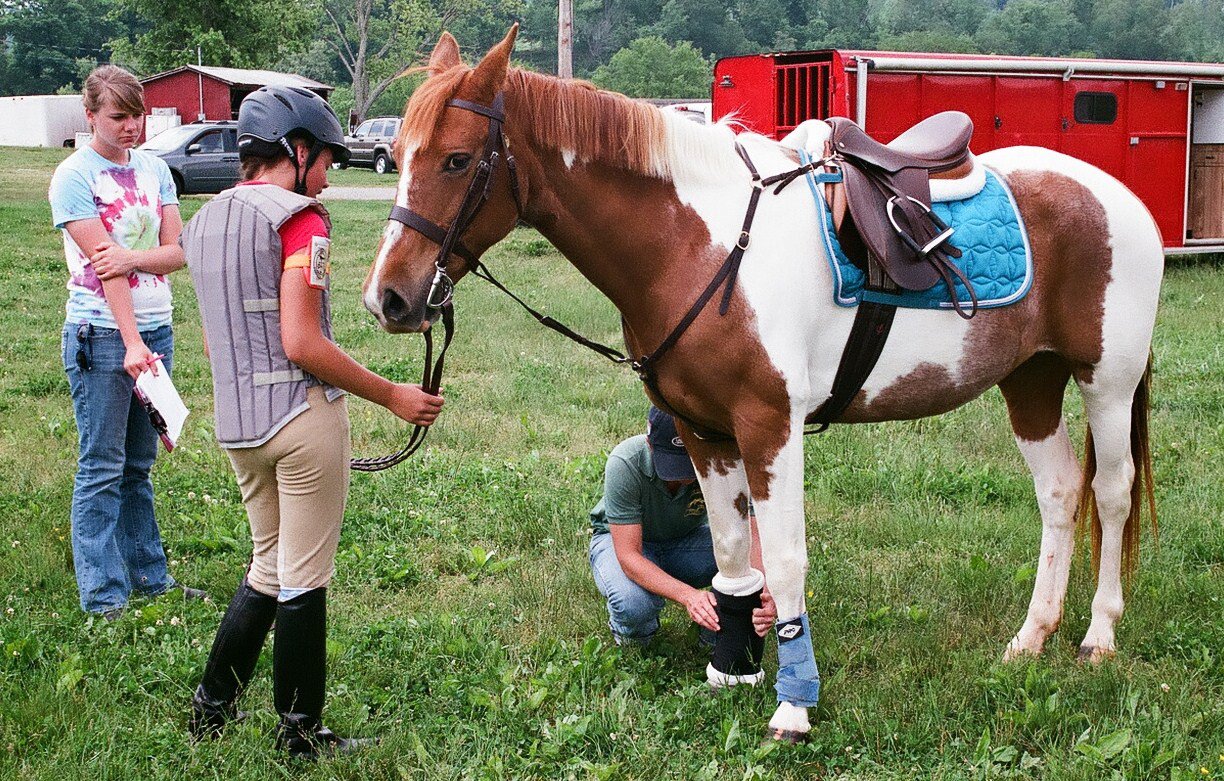 And how the tables turn! Here I am inspecting a stable bandage at a Pony Club rating a few years back. Photo courtesy of Lakeway Pony Club.

The 2014 USPC Festival is taking place as we speak throughout the week in Lexington — check out the website for details and keep an eye on EN as we’ve got riders blogging for us from the event. Here’s wishing that, win, lose or draw, all the competitors carry away with them a learning experience and a handful of happy memories. That’s the stuff that sticks. Go Pony Club!