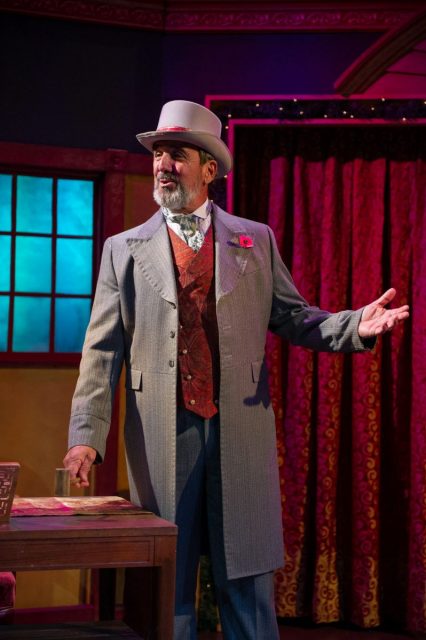 Brian O’Connor as the Chairman. Photo by C. Stanley Photography.

You know Brian O’Connor as the voice of U.S. eventing in Area II and beyond, but did you know he is also an actor? While he ultimately pursued a career in announcing, Brian’s background is in theater, and he returned to the stage last year as the Chairman in Christmas at the Old Bull & Bush.

Brian is once again reprising the role this year at MetroStage in Alexandria, Virginia, and he is inviting all EN readers local to the area to take advantage of discounted friends and family tickets and see the play as part of their holiday celebrations.

As the Chairman, Brian narrates the frivolity and takes you into the merriment and revelry of the Bull and Bush, a historic London pub. You’ll enjoy Vaudeville-era tunes, classic Christmas carols, silly puns, sing-alongs (with lyrics provided!) and even a moving tribute to the 100th anniversary of Armistice Day. There is even a chance to join the cast in a hysterical reenactment of the Cratchit dinner from Charles Dickens’s beloved holiday classic, A Christmas Carol.

Joining Brian are veteran musical theater actors Sherri Edelen as the vivacious Florrie Forde; Albert Coia as the lovable and comical Bertie Ramsbottom, who regales the audience with a hilarious rendition of The Night She Cried in My Beer; and the singing and dancing pair, Jimmy Mavrikes and Katherine Riddle.

Broadway World said it best in reviewing the play: “Christmas at the Old Bull & Bush will keep you laughing and singing all the way home.” Christmas crackers, British beer and cider, mince pies and sausage rolls are also available to purchase at the MetroStage bar to ensure a truly festive evening.

To take advantage of the discounted ticket rate of $35, call the MetroStage box office at 703-548-9044. You must ask for the discounted rate and mention you are an EN reader coming to see the play in support of Brian O’Connor. (I’m seeing the Saturday matinee on Dec. 22 and hope to see lots of eventers there!)