An artist’s interpretation of the Opening Ceremony flotilla. Image courtesy of Paris 2024/IOC.

We feel like we’ve been daydreaming about the Paris Olympics for years. Cities don’t come much better than France’s sexy, moody capital, and as a previous host of the Games way back in 1924, it knows a thing or two about putting on a spectacle. For us equestrian enthusiasts, we’re certainly being spoiled: the announcement that the equestrian facility would be built at the opulent Versailles Palace made major waves across the disciplines, and rightly so. The impeccably maintained parkland and fairytale spectre of the palace itself will work in tandem to make this arguably one of the most iconic modern-day sites of our sport.

The IOC and Paris’s own Olympic committee has been hard at work over the past months planning the infrastructure and logistics of their Games, which take place in just a scant two-and-a-half years, and the most recent box they’ve ticked is that of the Opening Ceremony. Ordinarily, we see these ceremonies take place in the main athletics stadium, where athletes, connections, and those spectators lucky enough to nab a pricey ticket get to watch cultural displays celebrating the host country and cheer in the parade of athletes and, of course, the Olympic flame, which finishes its long trip around the world and officially starts the Games.

This cycle, though, Paris wanted to do something a little bit different. Instead of restricting access to the ceremony to those able to purchase a ticket, they’ve opted to open it up to the city at large for the first time ever, using the Seine as their venue and allowing everyone the chance to experience a piece of the Olympics. The idea, which was floated — thank you, I’m here all week — as early as March of this year, was confirmed at an IOC press conference on December 13th.

The opening ceremony will take place largely on boats, which will ‘parade’ athletes from a starting point at the Pont d’Austerlitz in western Paris’s 11th arrondissement to the Pont d’Iéna, in close proximity to the Eiffel Tower in the east of the city. Athletes and performers will then move to the Trocadéro Gardens, with the Eiffel Tower as a backdrop, for the finale of the Opening Ceremony. This spot already has significance to the Games: it’s the site of the official handover, which took place as part of Tokyo’s closing ceremony earlier this year. 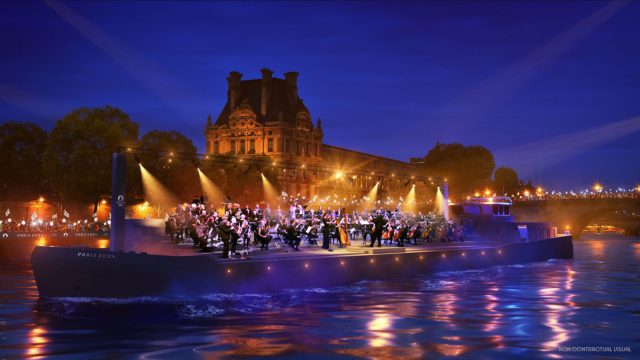 A floating orchestra will add some extra ambience to the proceedings. Image courtesy of Paris 2024/IOC.

“This Ceremony will be an exceptional experience for all the athletes taking part, but also, and above all, for the people of Paris, for France and for the whole world,” says Thomas Bach, President of the IOC. “We started discussing this Seine option with the Paris 2024 team and its President, Tony Estanguet, after the great success of the Opening Ceremony of the Buenos Aires 2018 Youth Olympic Games. There, over 200,000 people gathered around the iconic Obelisk monument. We were all inspired by this magical moment, but we also recognised the challenges it could create. Today, I am happy that the French authorities on all levels have carefully considered this opportunity and come to the conclusion this will happen, under the premise of all necessary security precautions. The IOC has full confidence in the creativity, flexibility and sense of innovation demonstrated, from the beginning, by the Paris 2024 team. They will ensure that the Opening Ceremony is a truly unique and emotional Olympic experience for the athletes, who will be surrounded by the public, being welcomed and celebrated by the French people. It will be a spectacular spectacle on the Seine.”

Over 600,000 people are expected to spectate at the ceremony, which will take place on July 26, 2024. Though the artistic director hasn’t yet been confirmed, the committee is planning for a spectacle that combines Paris’s rich history — including monuments such as Notre Dame and the Louvre, both of which will feature along the route — with new, bold, creative embellishments. Boats of performers and orchestras will float along the 6km route, too, and screens will be erected to allow spectators to watch the whole parade and performance from any vantage point. It’s expected that some parts of the riverside will be ‘free’ zones, with no ticketing needed, while others — presumably those with grandstand seating — will require a ticket. This will allow for roughly ten times more spectators than would fit into a stadium — a major objective of Paris’s 2024 committee President, Tony Estanguet. 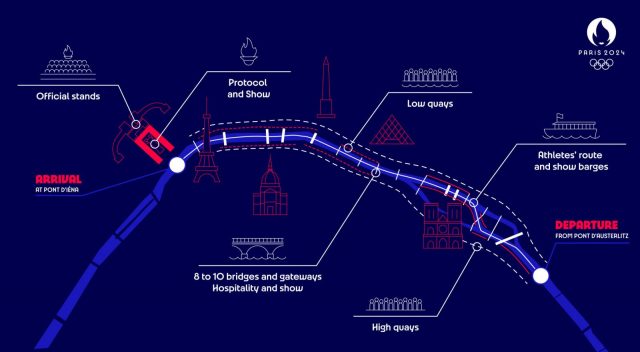 The planned route for the Opening Ceremony parade. Image courtesy of Paris 2024/IOC.

“On 26 July 2024, a truly spectacular Opening Ceremony will mean the eyes of the world are on the city, proudly promoting the values of Olympism,” she says. “The ambitious project, which is the result of intensive collaboration between hundreds of stakeholders, will bring joy to Parisians, Île-de-France residents and tourists alike. This Opening Ceremony will mark the history of the Games. For the first time ever, rather than being contained in the stadium, it will take place in the heart of the capital. Along the quays and bridges of the Seine, against this grand and unique backdrop, the athletes will be carried by a majestic flotilla of boats. The ceremony will be accessible to one and all. The choice to launch the Paris Games on the Seine is a bold one, which is part of a long-term strategy. Beginning with the opening of the embankments to pedestrians in 2016, the idea is to give Parisians and local residents back their river banks, to walk along, engage in sports, or simply admire the beautiful surroundings. The Paris 2024 Olympic and Paralympic Games will mark the beginning of a new chapter in this story, with swimming in the Seine itself.”

While we generally wouldn’t recommend swimming in the Seine unless you’re really into giving cholera a go, this forward-thinking and accessible approach to the Games is widely welcomed and feels like the perfect antidote to the Olympics in the Time of Covid, with its firmly closed doors. Roll on Paris!