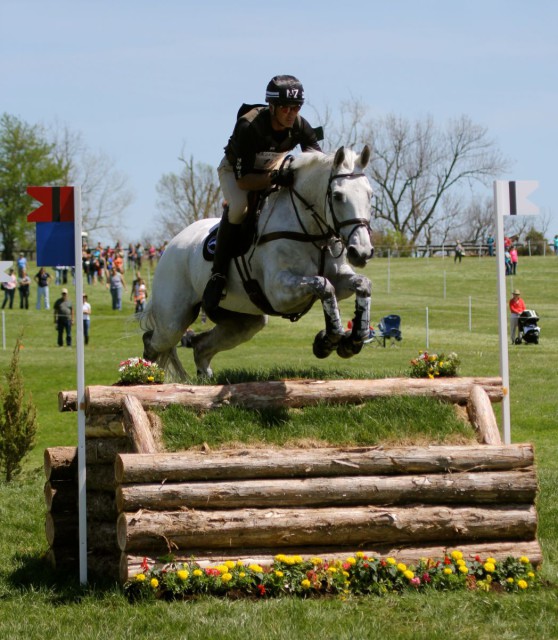 Andrew Nicholson and Avebury at Rolex. Photo by Kasey Mueller.

The Festival of British Eventing has just wrapped up at Gatcombe Park, with championship divisions running for Novice, Intermediate, Advanced and Open (CIC3*).

The Novice through Advanced championships have wrapped up, and the Open/CIC3* has begun cross country. Going into cross country, Francis Whittington and Easy Target were leading on their dressage score of 35.6 after a double clear show jumping round. Andrew Nicholson followed in second and third with Avebury and Nereo, respectively.

The cross country rode well, with time being the biggest factor. Only three pairs had stops on course, and two were eliminated. Andrew Nicholson came home with just .4 time penalties to take the win, with Francis Whittington holding on to second after incurring 4.4 time. Louise Harwood and Whitson moved up from fourth to third with .4 time on cross country, further solidifying their quest as a reserve WEG pair for Great Britain.

Gatcombe reported on Twitter that Great Britain’s Beanie Sturgis had a fall from Wizard From Aus on cross country, but that she was conscious and was having routine medical checks done on site.

I was able to watch a few of the show jumping rounds from this morning on the E-Venting Facebook page, and the course was definitely a challenge, with plenty of tight turns to keep both horse and rider on their toes. The majority of the top 10 going into cross country had clear rounds, but rails fell for most of the remaining combinations.

William Fox-Pitt was on a roll this weekend, taking home the win in both the Novice and Intermediate Championships. William won the Novice division aboard Top Biats, a 7 year old gelding owned by Judy and Jeremy Skinner and Margie and David Hall. This is the gelding’s third consecutive win.

William also won the Intermediate Championship aboard Luxury FH, owned by Catherine Witt. William earned an impressive 23.3 in the dressage and added just 6 time to his score to finish in first in front of runners up Andrew Heffernan and Lawless Lil.

In the Advanced division, Aoife Clark and Fenyas Elegance took home the win on a score of 34.2. The pair will next head to WEG representing Ireland. Nicola Wilson and Watermill Vision moved up from fifth to second, and Kristina Cook with De Novo News moved all the way from 15th after show jumping to finish in third.

E-Venting has some great photo and video coverage of the event on their Facebook page, and you can also check out both the E-Venting and the Gatcombe Twitter pages for more.