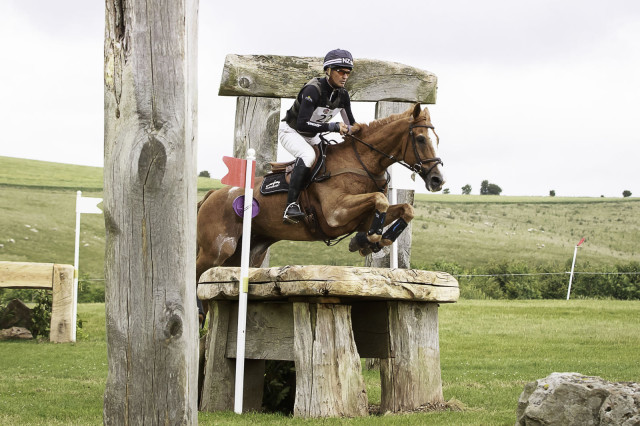 Andrew Nicholson and Nereo competing in the Barbury leg of ERM. Photo by Libby Law Photography.

Andrew Nicholson (NZL) has now won five consecutive three-stars at the St. James Place Barbury International Horse Trials. The previous four were with the now retired Avebury and the fifth this weekend with a superb finish in the third leg of the Event Rider Masters Series riding his 2012 London Olympics and 2014 World Equestrian Games mount Nereo.

Andrew and the 16-year-old Caballo de Deporte Espanol gelding owned by Deborah Sellar were third after dressage on a 37.6. They added two time penalties in show jumping this morning, moving into first when overnight leader Marcio C Jorge (BRA) and Lissy Mac Wayer incurred eight penalties, then blazed around the cross country double clear to clinch the £16,000 first prize.

“I really felt the big atmosphere out there today, but this is why I do it, for the people who support me and to win the first ERM class held at Barbury is extra special,” Andrew said. “I felt I was meeting every fence very easily. Nereo is a long-striding horse but he now adapts to whatever he’s got to do. In fact, he feels like Avebury.”

Paul Tapner (AUS) and his and Amand Burns’ 14-year-old Yogi Bear VIII pulled a rail in show jumping but also produced a double clear cross country to finish second in the division and move into second place on the Event Rider Masters Series leaderboard with 63 points.

“Being on the ERM podium has been a main aim for me this season, so I am very happy,” Paul said. “Our Olympic team gets announced tomorrow (Monday 11 July) and we will have to wait and see what happens. Gatcombe is the next ERM leg and I will certainly be there, if I am not in Rio.”

The new Series leader is Gemma Tattersall, who finished on her dressage score of 44.4 with Caroline Teltsch’s 8-year-old Irish Sport Horse Santiago Bay. They were 13th after dressage but two clear rounds moved them up to finish third overall and take over the Series lead by three points.

With the previous ERM Series leader Astier Nicolas (FRA) now third with 59 points, and Jonelle Price (NZL) and America’s own Clark Montgomery not far off on 47 and 46 points respectively, it’s anyone’s game halfway through the Series’ inaugural year. Click here for the full ERM rankings after Barbury.

Dani Evans and Smart Time were also double-clear to move up from 14th after dressage and finish on a 44.6 for fourth. Marcio and his 13-year-old Westphalian mare jumped clear across the country with 5.6 time penalties for a fifth place finish. Sweden’s Hedvig Wik, 32, and Chippieh, a 14-year-old Holsteiner gelding owned by Sara Sjöborg Wik, had a difficult show jumping round with 18 penalties. They dropped to 21st place from second and opted to withdraw before cross country.

As for the North American contingent, Rebecca Howard (CAN) and Blithe Hill Farm’s 15-year-old Canadian Sport Horse Riddle Master picked up an uncharacteristic 20 early on course to finish 23rd. Tiana Coudray (USA) and Jatial, Inc’s 10-year-old Wesphalian mare Sambuca F added a couple of refusals on cross country to finish 27th. In the St James’s Place CIC3*, Kathryn Robinson (CAN) and her own 15-year-old Let It Bee added only time on cross country to finish 15th.

Australia’s Christpher Burton and Polystar, owned by Michaela Sandberg, won the St James’s Place CIC3* in the 11-year-old Westphalian’s first three-star attempt. “I only came here to show him his first three-star competition, not to win!” Chris said. “But I was impressed with his stride and scope – he’s got quite a bit of Thoroughbred blood – and he’s got a good attitude.”