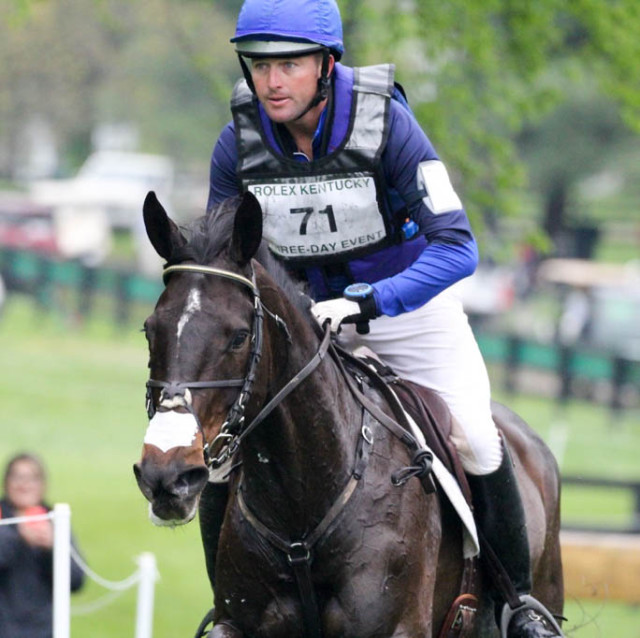 Will Faudree and Andromaque at Rolex 2015. Photo by Rare Air Photography.

It’s the end of an era for fans of Andromaque, Will Faudree’s four-star partner that has garnered numerous top placings at major events around the world during her career. The 14-year-old Irish Thoroughbred mare owned by Jennifer Mosing has been officially retired from the upper levels and is now entering the next chapter of her life as a mother.

An ultrasound confirmed last week that “Missie” (Anshan x Gortnagale, by Strong Gale) is in foal to Sir Shutterfly, Fairlight Stud’s Hanoverian stallion (Silvio I x Famm, by Forrest xx) and a full brother to Meredith Michaels-Beerbaum’s legendary show jumper Shutterfly. A surrogate mare is also carrying a second of Missie’s foals by Sir Shutterfly via embryo transfer, so Gavilan Farm will welcome “twins” at this time next year.

The decision to retire Missie follows her withdrawal from the last competition of her career at the Rolex Kentucky Three-Day Event in April, where she jumped clear on cross country (sans 11 penalties for breaking a frangible pin) with 5.6 time penalties despite throwing a shoe on course. 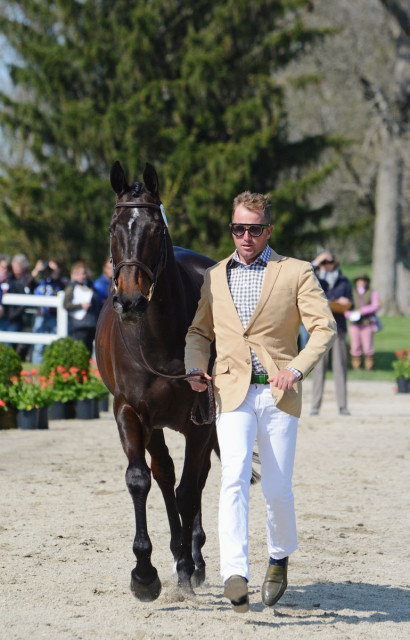 Will Faudree and Andromaque at Rolex 2015. Photo by Jenni Autry.

But Will knew something wasn’t quite right after returning to stabling. He withdrew Missie before the final horse inspection, and a full veterinary workup after the event revealed she had bowed the superficial flexor tendon in her right front leg.

“It was mind boggling to me when we got back to the barn and she wasn’t 100 percent because she never took a bad step on course. She never wavered,” Will said. “She is an amazing cross country horse. What she lacks in the dressage ring she made up for in the galloping lane. She’s a very special horse to me.”

Faced with the decision of whether to take one more shot at bringing the mare back to the highest levels of the sport, Will and his longtime owner and supporter Jennifer Mosing decided to play it safe — Missie didn’t owe them anything. 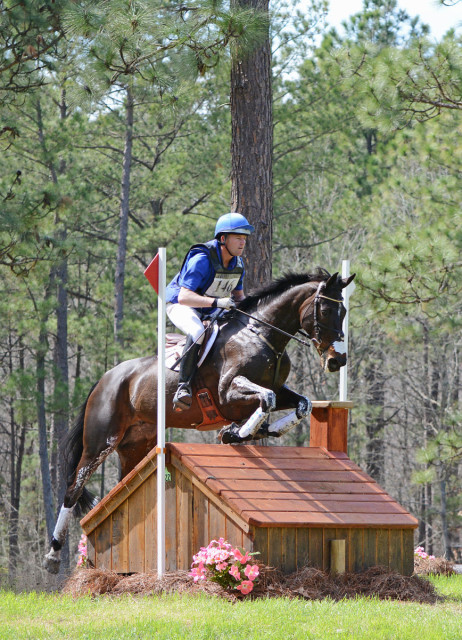 Will Faudree and Andromaque at Carolina 2015. Photo by Jenni Autry.

“I would never forgive myself if I tried to push her to go back to the four-star level and she couldn’t have a comfortable and happy retirement,” Will said. “We didn’t feel that it was in her best interest to give it one more go.”

Missie completed 15 events at the three-star level and and one event at the four-star level during her career with Will, which began after he took the ride from Irish rider Andrea Ryan in 2009. The mare had not had a clear cross country run at the FEI level at that point in her career, but she and Will quickly formed a partnership that made them a formidable cross country combination. 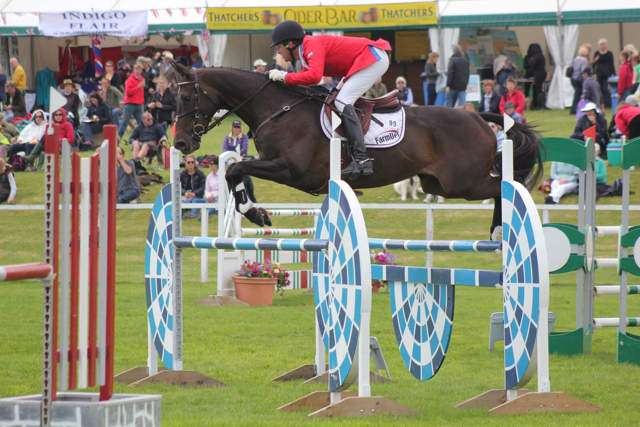 Will Faudree and Andromaque at Barbury Castle 2012. Photo by Samantha Clark.

Missie was short-listed for the 2012 U.S. Olympic team and named to the USEF Eventing High Performance Training Lists on numerous occasions, making her the first mare Will ever rode that was “team-worthy.”

“I’ve said, ‘It’s a love affair every time I ride her and a honeymoon when I get to go cross country on her.’ We have this great partnership,” Will said. “She reminded me so much of Antigua, my first team horse. They’re built very similarly and gallop very similarly. People who knew Antigua and then watched me with Missie would say it was eerily similar how they galloped and jumped. It was like going home.”

Every horse has their own personality, strengths and weaknesses and offers something new to teach you as a result, Will said, but the education he received from Missie stands out in a league of its own. 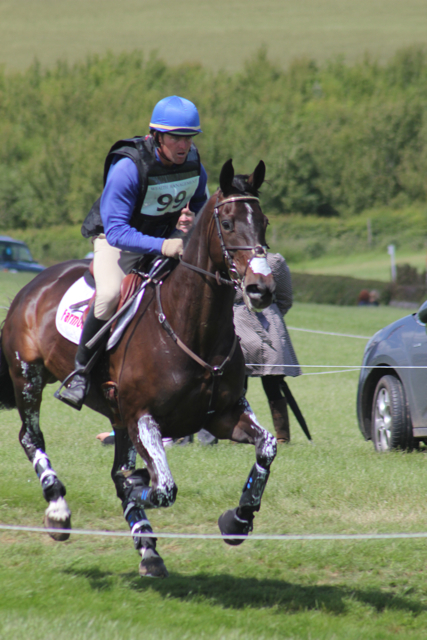 Will Faudree and Andromaque at Barbury Castle 2012. Photo by Samantha Clark.

“She was one of the first horses I had to meet on her level. When I first started riding her, we clicked right away competitively, but I was on my side of the 50-yard line and she was on her side. You can tell a gelding to do something, but you have to ask a mare. If I wanted her to do something but didn’t use the right punctuation, she would let me know.”

Will hopes Missie’s “princess complex” will cross nicely with Sir Shutterfly, whose babies are “typically opinionated and strong-willed characters.” It’s his first forray into breeding event horses and a journey he is making thanks to the advice of his longtime friend and mentor Sandy Phillips, who recommended Sir Shutterfly as a match for Missie.

He already has one Sir Shutterfly offspring in Socialite, a 7-year-old mare bred by Sandy that is currently campaigning successfully at the one-star level, and Will said he hopes Missie’s babies will turn out to be excellent partners just like “Blueberry.” 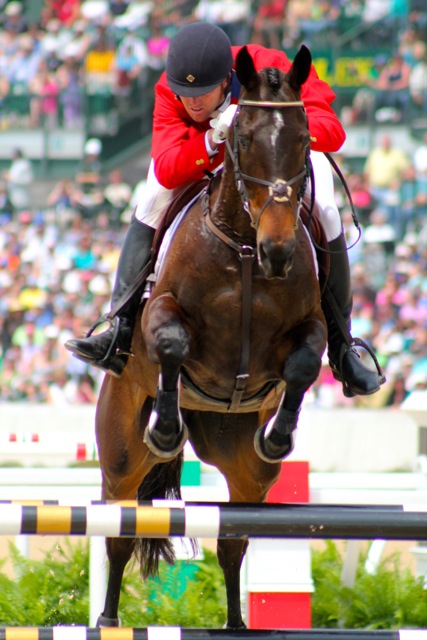 Will Faudree and Andromaque at Rolex 2012. Photo by Samantha Clark.

“I will greatly miss not being able to leave the start box on Missie, but she’s sound and she’s happy, and she still gets to be a part of the program. Funnily enough, since making the decision to retire her and breed her, she’s become very maternal. I have a yearling and a 2-year-old that she is pretty enamored with. It’s like she has decided she’d like to have a couple of those,” Will said.

“I think she knows that this is the next step in her life, and I think she’s happy about it. It’s just a feeling I get when I look in her eyes — that she knows she’s going to help produce stars for the future.”

The EN team wishes Missie all the best in her retirement and new role as a mother. Go Eventing.