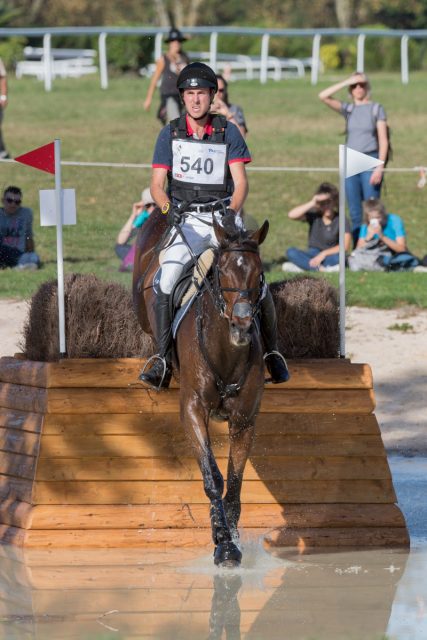 We’re devastated to report that Archie Rocks, ridden by Switzerland’s Felix Vogg, has been euthanised following a fall late on course at Les 5 Etoiles de Pau yesterday. The pair had enjoyed a clear round up until the final water on course, which featured a hanging log in at 28A and a skinny in the water at 28B. After navigating the first element successfully, the gelding appeared to stumble in the water, falling just in front of the second and sustaining a catastrophic injury to his shoulder.

The event has released a statement, which reads: “It is with a great sadness that we announce that Archie Rocks, ridden by Switzerland’s Felix Vogg and owned by Phoenix Eventing S.à.r.l., was put down on Saturday, October 26, following a fall on the cross-country, while competing at the CCI5*-L of les 5 Etoiles de Pau, France. The fall occurred on fence 28B.

The decision to put the horse down was taken by the owner, in consultation with the show veterinarians.”

“Archie Rocks suffered an irreparable shoulder fracture, considered to be severe by the veterinarians on the site,” says Felix, who co-owned the gelding, in the statement. “Despite all efforts to save him, we have had to take the difficult decision to put him to sleep. Archie was a very special horse in many respects. Special thoughts go to all his American fans, who have given him their support throughout his career. He was outstanding on the cross-country, a sweet horse who gave his best to his rider.”

Archie Rocks enjoyed a brief career as a racehorse, winning over $30,000 over 30 starts in the States before embarking upon his second career as an eventer. He was bought from Chris Talley by Maya Simmons, who renamed the horse – then called Smittys Messiah – to honour her grandfather, who served during World War II. Maya campaigned the gelding to CCI4*-S before Buck Davidson took the reins, partnering Archie to top ten finishes in all four of their international runs together, including Fair Hill CCI4*-L, Jersey Fresh CCI4*-L, and a win in the CCI4*-S at Plantation Field. Felix bought the eleven-year-old at the end of 2018, and in their brief but illustrious partnership together, they finished in the top ten in the CCIO4*-S at Pratoni, the CCI4*-L at Strzegom, and represented Switzerland at this summer’s European Championships.

Eventing Nation’s team sends its deepest consolations to Felix and all of Archie’s connections and many fans. Archie Rocks was not only a much-loved ambassador for retrained racehorses worldwide, he was also a firm favourite among the teams he was a part of, and will be much missed.