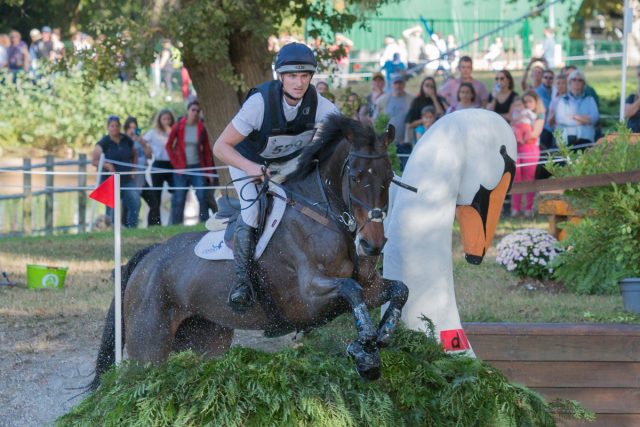 If you’ve been following along with Les 5 Etoiles de Pau – or, indeed, have nipped onto social media over the last 24 hours – it’s likely you’ve come across a widely-shared video of an incident that occurred over yesterday’s cross-country horse. Today, we spoke to 27-year-old Jack Pinkney, the British debutante who was eliminated when his mount, 15-year-old Raphael, attempted to jump a large dividing wall in the final section of the course, and who has been at the centre of heated criticism as the clip has gained traction.

“It started brilliantly – he was flying, as always, and he made everything in the beginning feel like it was easy. He was cruising around, and it felt like you’d want it to,” reflects 27-year-old Jack, who runs his own yard in Andover, Hampshire after several years working for Padraig and Lucy McCarthy and latterly, Austin O’Connor. He took the ride on Julia Plaisted’s Raphael, who was a working hunter until the age of ten, five years ago, and has produced the Irish Sport Horse through the levels as he, too, has made his debut at the upper echelons of the sport. Promising results, including tenth place in a CCI4*-S at Chatsworth and a fast clear at Blenheim’s CCI4*-L, led to the decision to head to the south of France’s for the pair’s first five-star.

The early section of the course proved uneventful for the seasoned partnership. But after jumping neatly through the first part of the course’s first water complex, Jack turned back for the second passage through, made up of fences 10 – a reasonably skinny arrowhead – and 11, a brush swan in the water. As the pair touched down from fence 10 and aimed for the left-handed turn to 11, Jack’s left rein snapped partway through the rubber section, and with the balance and steering momentarily lost, they slipped by fence 11, picking up 20 penalties. Jack quickly regained purchase on the broken left rein, which allowed enough length for him to comfortably use it, circled back, and popped fence 11.

“It snapped on the rubber section of the rein, which was odd, but I managed to pick up what I could in the water to then ride out over 11 and 12,” says Jack. “Again, [Raphael] showed how class he was, because he just did it. Then I had a bit of thinking time, because I had a bit of a gallop to a straightforward table, and I was addressing what I had at that time: I had a left rein, so I decided that I had control of the horse. We jumped the table at 13 and he felt good, and so I addressed it again.”

Jack assessed the length of rein he was afforded, and tested the controls to see whether he felt he could assert enough influence for the next, more open, part of the course.

“I had to have my left hand more forward, but I had a rein – it wasn’t like there was nothing there. I had a bit of rein to play with, and I could ride it. I shut the canter down, I shut the whole plan down then – I stopped my watch, because I thought, ‘let’s just try to give him a nice round with what I can do.’ I just wanted to get him home; I thought I was safe to go on because he’d been so easy and he felt brilliant.”

“We then did lots of technical parts [from fences 14 to 26]; I added in a couple of places because I changed my riding to try to get there and make it easier for the horse,” continues Jack. “Where there were long routes I took them. From then on, he was cruising and it was going well – he did the tricky turn to the left where you have two angled brushes [at 25 and 26] amazingly.”

The next fence was one of Pau’s myriad let-up tables – an innocuous obstacle after the skinnies and turns that the pair had already conquered. But this jump – fence 27, just prior to the final water and only a handful of fences from home – proved to be enormously influential to the pair, who had settled into a comfortable rhythm.

“He just jumped so well over [27] that it took the rein completely out of my hand,” explains Jack, who  leaned down to try to regain it. “I could never catch it again – I tried to pull on the martingale to slow him, and that’s where you see me trying to reach for the rein [in the video]. But the rein was hanging, and I couldn’t catch it.”

Just beyond fence 27, a large dividing wall – roughly ten feet high – opened into an archway to usher horses and riders into the final wooded section of the course. Still without his left rein, Jack felt Raphael lock onto the wall as though it was an obstacle.

“Being a very brave horse with confidence in our partnership, he eyed up the wooden dividing wall between two parts of the course, and there was nothing I could do. He took off at it, I fell off backwards and he galloped off,” says Jack, who landed on his feet as his horse attempted to clear the wall, instead crashing into it and landing on his hindquarters, quickly uprighting himself and cantering away.

Much of the criticism on social media has been directed at the two seconds of footage immediately after the fall, which show Jack throwing his whip to the ground as his horse canters away. But this, he says, isn’t indicative of any anger towards his horse – instead, it was a visceral reaction to how the situation could have panned out.

“At that moment, I was so angry with myself – I thought, ‘I could have hurt my horse’. Any reaction from me was just upset with myself,” he explains. “I made a massive mistake – your adrenaline’s up, you’re going, and you’re wanting to finish, and as a competitor that’s what you do. But then, if you could take a breath when you finish it, you start to think that would could have happened could have been so much worse, and that’s when you think, ‘I should have pulled up.’”

After tending to his mount, Jack took himself to the ground jury, professing his responsibility for the entire incident. He has received an official warning.

“I told them that I’m completely guilty; I have nothing to hide,” he says. “I made a mistake, and I’ve learnt from it – I won’t ever do it again.”

Despite the intensity of the backlash, Jack tells us that his overwhelming feeling is relief that his partner, Raphael is unhurt.

“He’s totally sound and happy, with just a small cut on his face,” he says. “We trotted him up this morning and he was absolutely fine, so I’m so relieved. He’s such a gent, and he just wants to please – I’ll probably never ride a horse like him again, and I know him so well. If I’d been on something else, I’d have thought differently. From the bottom of my heart, I didn’t want it to be dangerous, and I’m so sorry.”