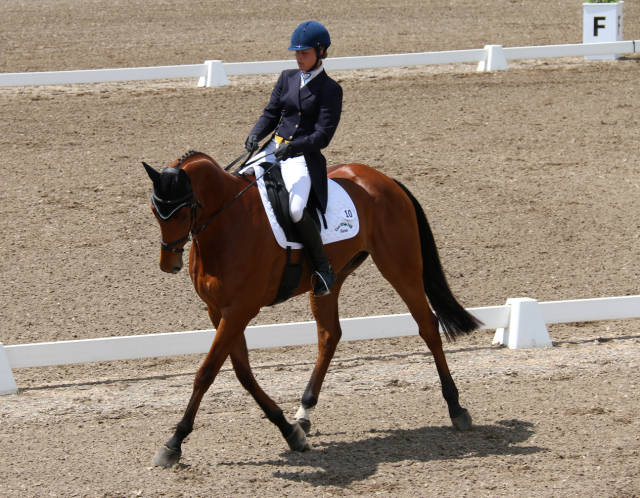 Ashley Adams and Da Vinci Code laid down a stunning dressage test this morning and their score of 43.5 stayed afloat throughout the afternoon to top the 2* leaderboard. The 7-year-old Irish Sport Horse gelding, owned by Joan Nichols, certainly has a “wow” factor about him and Ashley did a great job of channeling his big, flashy movement into a polished performance.

This pair is one of several who came to Canada looking for a bit of redemption. Their jumping record this spring has been a bit spotty — most recently, Ashley fell in the Intermediate at the Chattahoochee Hills International and in their outing before that, the Ocala CCI2*, they collected a couple stops. But Ashley is a experienced and tactful rider, and she’ll be looking to give this young horse a confident go around the cross-country on Saturday. If the horse is as dazzling over fences as he is in the sandbox, this is definitely a pair to keep an eye on for the future. 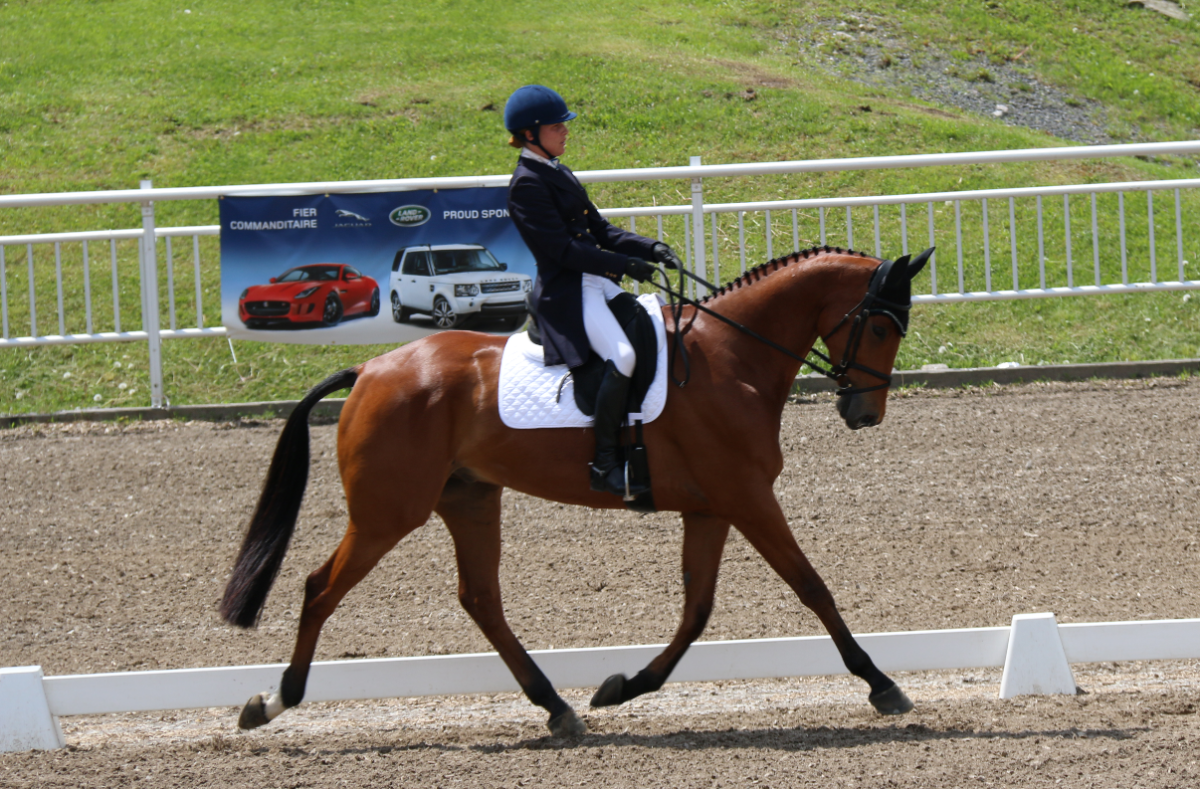 Close on Ashley’s heels are Lauren Kieffer and Meadowbrook’s Scarlett, who trail just a sixth of a point behind on a 44.10. Meadowbrook’s Scarlett, like Like Da Vinci Code, is a precocious 7 years old but her age didn’t reveal itself; she kept her composure save a wiggle in the halt, and in typical Lauren fashion they squeezed every last point possible out of the test. This pair is fresh off a win in the CIC2* at Jersey Fresh and I’m definitely looking forward to watching them take a crack at their first CCI* course together here at Bromont. 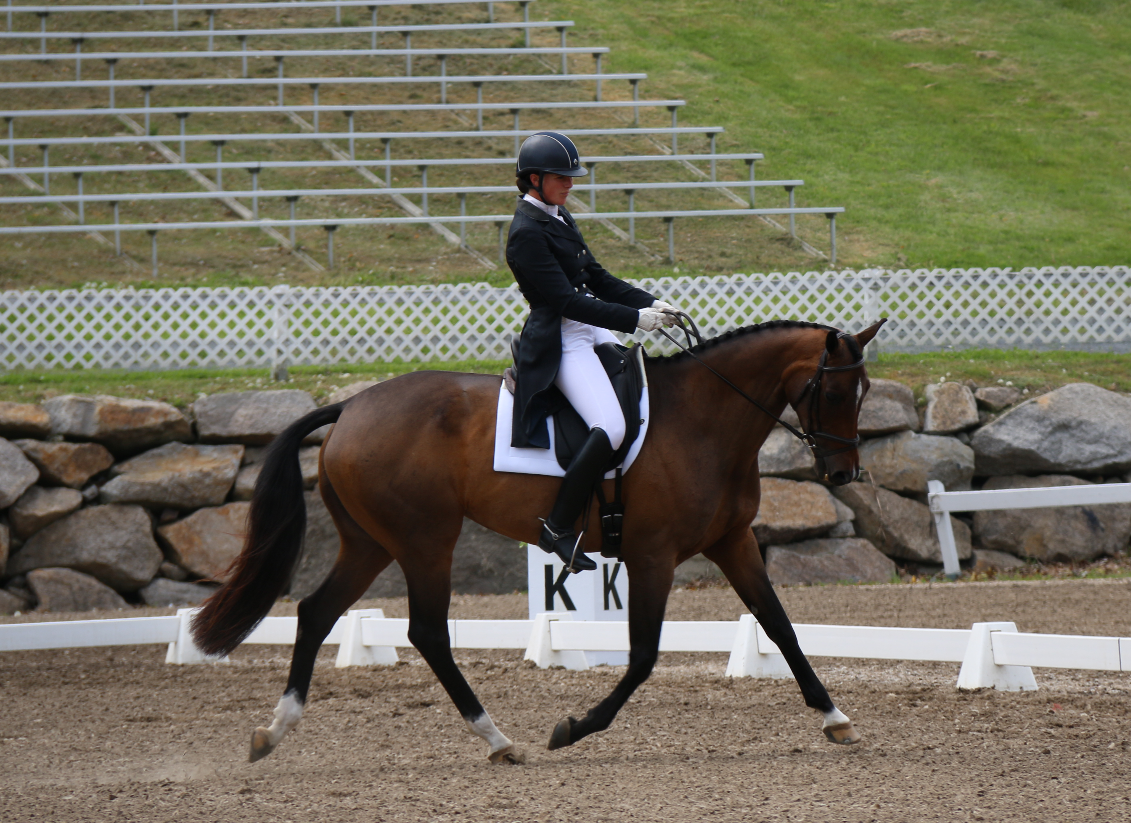 Tied for third are Callie Evans/Glendening Avis and Lucia Strini/Sammy Jo, sharing a score of 48.20. Callie, of Ontario, and her big buckskin mare laid down a solid test that earned a “well-done” from Canadian coach Clayton Fredericks upon exiting the ring. Lucia Strini, based out of Plain Dealing Farm in Virginia, coaxed a flowing test out of her striking black Hanoverian mare. 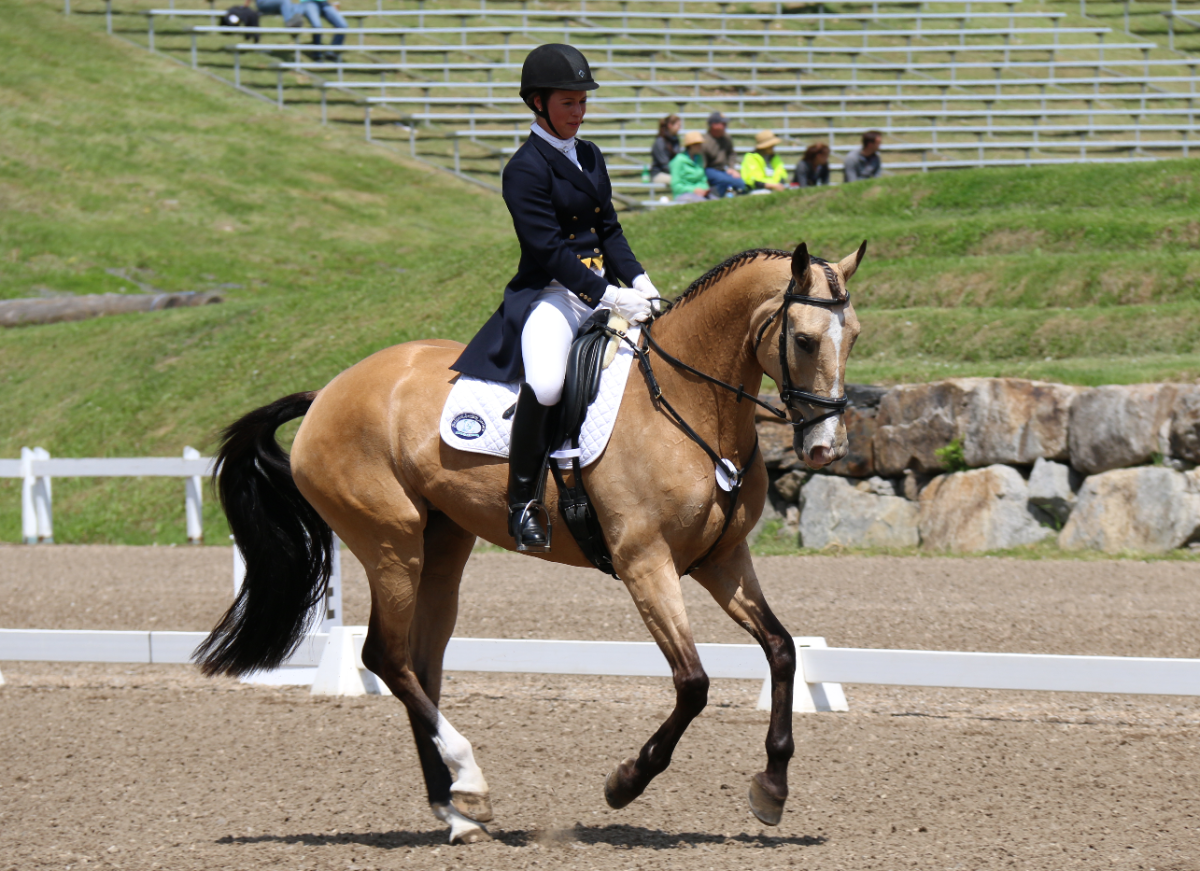 Callie Evans and Glendening Avis, tied for 3rd in the 2* at Bromont. Photo by Leslie Wylie. 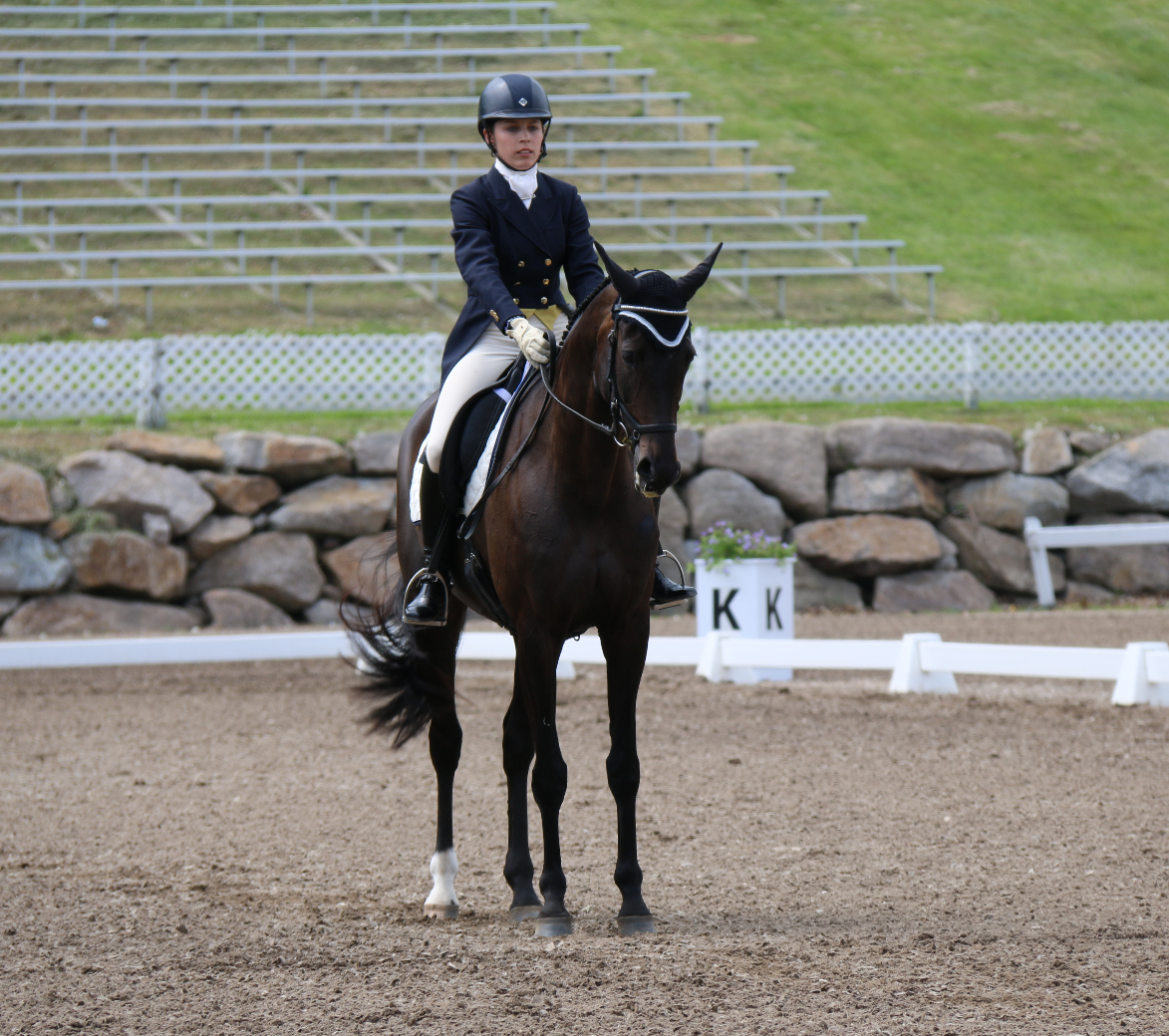 Lucia Strini and Sammy Jo, tied for 3rd in the 2* at Bromont. Photo by Leslie Wylie.

Andrew Palmer and the Trakehner stallion Tatendrang rounded out the top five on a score of 49.80. Andrew is a very quiet, lovely rider who seems to have worked out an agreement with the stallions he rides. They always try their best for him and Tatendrang was no exception — it was fun to watch Andrew finesse the stallion’s big presence into a workmanlike test. 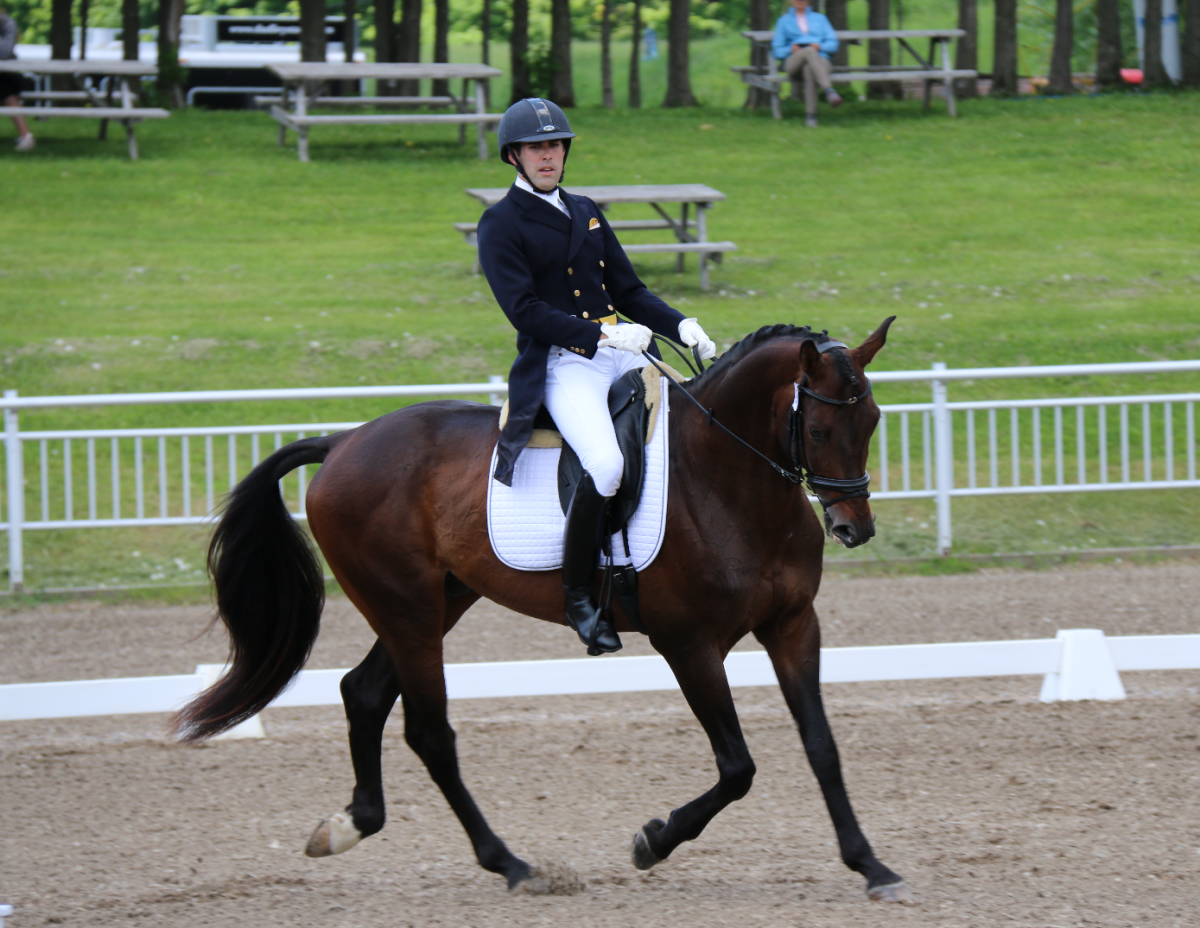 Andrew Palmer and Tatendrang, tied for 5th after dressage. Photo by Leslie Wylie.

The first day of CCI1* dressage just wrapped up with Peter Barry and Long Island Tea leading the pack on a score of 41.0. Buck Davidson and Cartier are tied for second with Erin Sylvester and Sweet Rebellion on a 43.80.