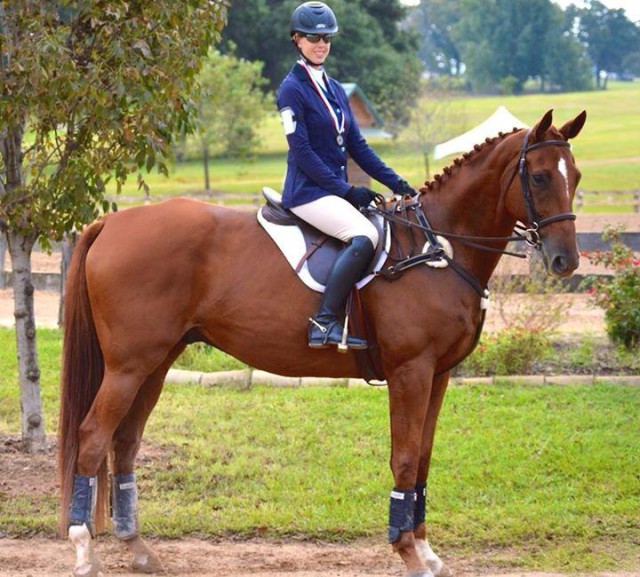 Ashley Russell and Philharmonic competing at the AECs. Photo by Jen Valentine.

Last week, we brought you the story of Ashley Russell, an inspirational rider who set out to compete at the Nutrena USEA American Eventing Championships in Tyler, Texas. Ashley competes her horse Philharmonic while being legally blind, and this year, she and “Nic” competed at the Beginner Novice level at the AECs, finishing in 13th place on their dressage score of 34.5.

Ashley lost her central vision at age 20 due to a rare genetic disorder called Stargardt disease, and now has a complicated but successful system of strategizing her jump rounds to accommodate her sight limitations. She uses land marks and other markers she can see with her peripheral vision to map out specific lines to her jumps, walking the course several times at each competition to be sure she knows how the weather and different positions of the sun will affect her ride.

“On my cross country ride at the AECs, his hoof prints matched my footprints; it was perfect,” Ashley said. “The biggest challenge was the warmup arena because it was a lot of motion and 20-some horses. It’s hard for me to navigate it all, but we got going, and he was happy and feeling good. We came out of the start box and hit all of our lines perfectly. It was great, it was fun, I was giggling around the whole thing.”

Traveling at speed across varied terrain presents obvious challenges for Ashley, but she’s developed a positive outlook for all of it. “I need time for my eyes to adjust from light to dark and dark to light, so I need extra planning for jumps like that. It’s very similar to how a horse sees, and it’s helpful because I can see if something is going to be spooky for Nic. I’m also color perception challenged in a similar way to horses.” 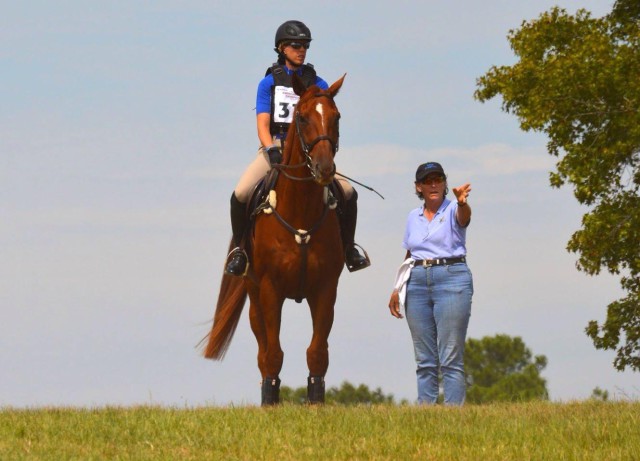 In this partnership, Ashley isn’t the only one facing challenges, as Nic has a comeback story of his own. When Ashley acquired him a few years ago, he was coming off a severe accident on the lunge line which resulted in him breaking his pelvis, wither and tail bone. Their progression has been slow, and Ashley has taken her time with him both physically and emotionally.

Nic suffered from a pretty significant loss of confidence following his accident, but Ashley says that he’s feeling really good these days, and has just starting coming into his own on cross country. He’s discovered that it’s his favorite phase, and he goes around with his ears pricked the whole time, and the AECs were no different. “He’s pretty good over everything, and he does look at stuff, but if I say ‘go,’ he goes. We have really come together, and he was on fire for that course,” she said.

Ashley admitted that Nic’s confidence issues appear most of the time in stadium, but you wouldn’t know it from their double clear round at the AECs. “I’m just so darn proud of him for jumping double clean,” she said. “We did already qualify for Novice (at the AECs) next year with our win at Seneca Valley this summer, and I’m counting down the days until we come back to Texas!”

Not only are they planning a return to the AECs next year, but Ashley’s goal is to do the Waredaca Novice Three-Day next fall, which would be her first long format competition. This fall and winter, they will focus on getting their scores more competitive in the dressage phase, and Ashley will return to Virginia to support her team of students and boarders, all of whom helped her get to Texas in one way or another.

“It’s a team effort, and now that my team has supported me to get here, I’m going home to support them for the rest of the fall. That’s what we’re about: fun, teamwork and support,” Ashley sad. “I’m very grateful for my coach Susu Dale, my super groom Jen Valentine and of course my loving husband for all his support. Nic and I couldn’t be here without the whole team.”

Ashley is always on the lookout for how to help and inspire other riders, and she’s glad she found an opportunity at the AECs. “I saw another rider in warm up who was vibrating on her horse, and I said, ‘Listen, I’m blind and he’s crippled, so if we can get out there and do this, you’re gonna be fine!'” Ashley, said. “If I can inspire others to just smile and laugh it off, that’s what it’s all about. If you’re not having fun, it costs too much money.”

Check out Ashley and Nic’s winning cross-country round from Seneca this summer: