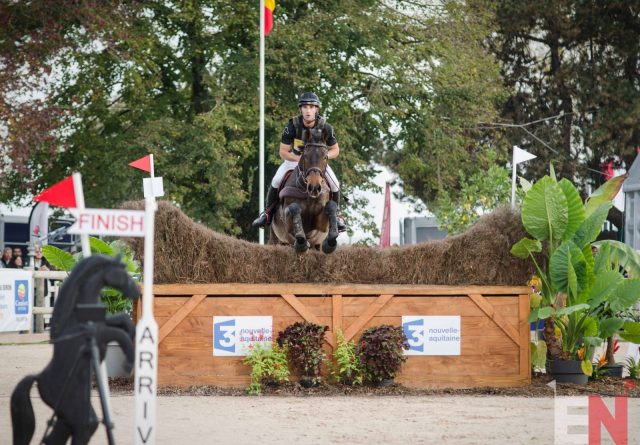 It was enough to inspire flashbacks to the Rio Olympics. Like that fateful course, which toppled the hopes of so many, Pierre Michelet‘s Pau track laid waste to the leaderboard and conquered even the most experienced horse-and-rider combinations.

Only three of the top ten going into this influential second phase were to remain there – Ros Canter and Zenshera, Sammi Birch and Hunter Valley II, and Gwendolyn Fer and Romantic Love. Otherwise, leaders slipped away and pairs climbed from as low as 38th place to sit within the top placings. Of the 62 combinations that started on course today, 39 would go on to complete and 28 would come home clear. Just two of those would be inside the time. 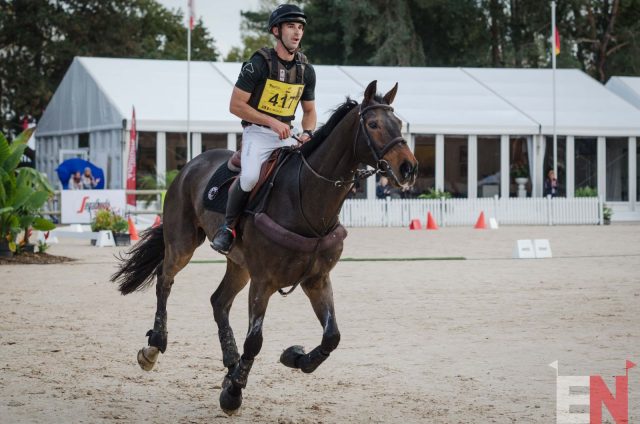 It was to be a big day for the home nation, with French riders occupying three of the top ten places. Astier Nicolas proved that last week’s win in the seven-year-old World Championship in Le Lion d’Angers was no fluke, laying down one of the two double-clears of the day with Molokai. This was enough to catapult him from 14th place into the lead, and coming at the tail end of a day full of emotional ups-and-downs, the enthusiastic crowd was all too ready to welcome their hero home safe. 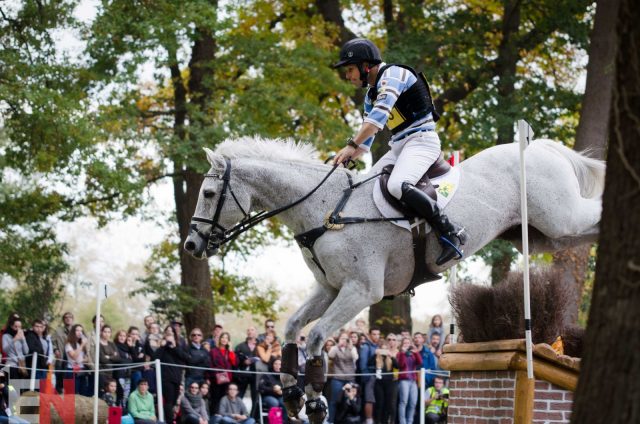 Shane Rose and CP Qualified early in the course. Photo by Tilly Berendt.

Overnight leaders Shane Rose and CP Qualified set off well, conquering the tricky first water with style, but the angled hedges at 11ABC were to be their undoing. They suffered a horse fall at the B element, and although both were up quickly and in good nick, their hunt for the win was over. 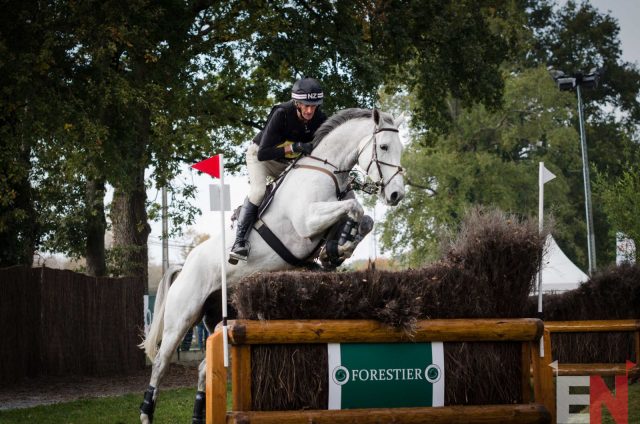 The hunt for a new world number one ended too when both Andrew Nicholson and Mark Todd had problems on course. Andrew opted to retire on course with Qwanza after a refusal at 11B, and fell from Jet Set at fence 25. Mark, too, retired at 11B with NZB Campino, and added 20 penalties at 7B with Kiltubrid Rhapsody. This locks Michael Jung in as world number one for a third consecutive year.

Their problems weren’t unique: throughout the day, nine faulted at 7B, the corner, eleven had problems at the first water at 9ABC, and nine ran into trouble at 11ABC, the angled hedges. 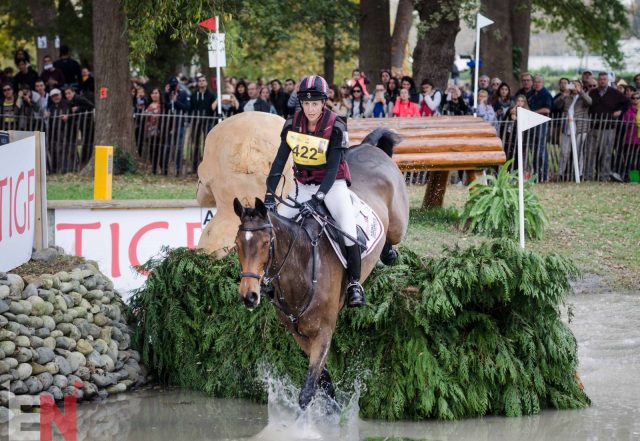 Sarah Bullimore managed to avoid any of the issues plaguing her fellow riders, and while most in the field only had to worry about piloting one horse around, she had three – and a trio of remarkable clear rounds propelled her into the top ten on all three of them, including Lilly Corinne, who moved from 38th after dressage to 8th.

“I’ve had an amazing day,” she said. “The fences were causing trouble all the way around the course, rather than in any one place, so it’s a good course in that respect. It’s tricky because the terrain can be quite changeable – for example, the sand in the crossings is quite deep and suddenly the horses have to work a lot harder, and then the sand in the arena at the end is much harder. It just takes a little bit more out of them than when it’s consistent and you can maintain the rhythm.”

“All three of my horses are very different, which makes it a bit difficult to remember which one you’re on once you hop on! Reve de Rouet is a little quirky and has a genuine fear of crowds, but he’s an out-and-out galloper and jumper and a real cross country machine.” 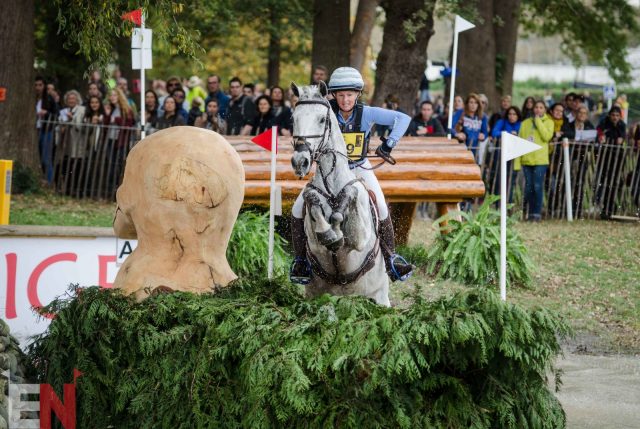 Jonelle Price and Faerie Dianimo were another of the big climbers of the day, moving from 25th place to ninth when they added just 9.2 time penalties to an otherwise fast, flawless round. 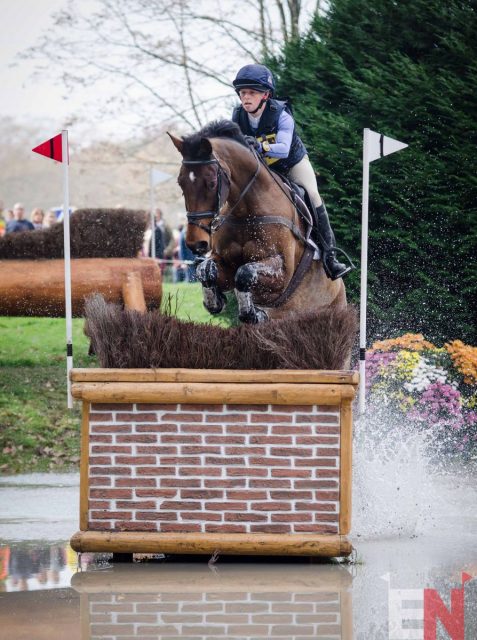 Clinging onto the chance of a top placing, Ros Canter and Zenshera executed a clear round, but 11.6 time penalties moved them down to sixth from second. 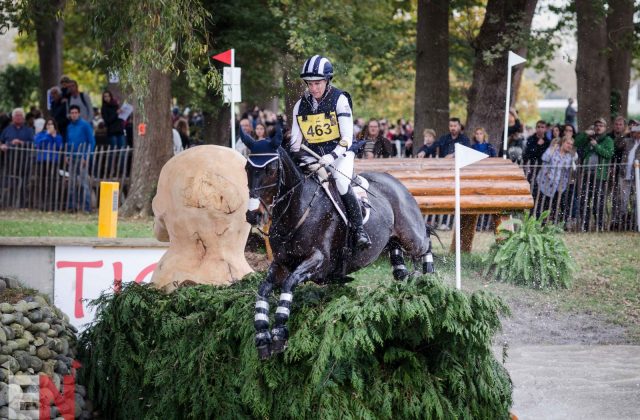 Allie Knowles and Sound Prospect posted a masterful clear round, adding 27.6 time to sit in 24th place going into the final phase. This is their first trip abroad to compete, but it didn’t show: their round was careful, considered, and showed their years of experience in the States. 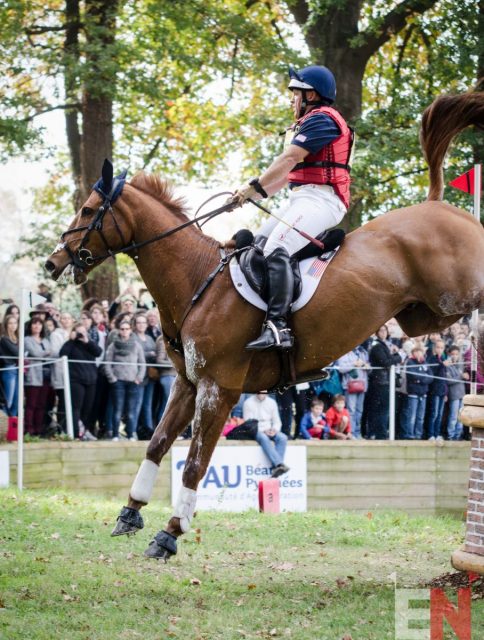 Buck Davidson and Copper Beach were confident and clear throughout the majority of the course, but a refusal at 29B knocked them down the placings. They added a further 22 time penalties and currently sit in 29th place. 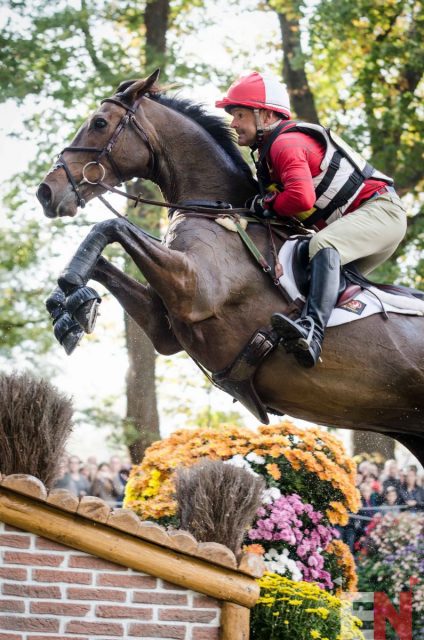 US-based Kiwi Joe Meyer fell from Clip Clop at fence 20, unfortunately expediting the end of what was an otherwise classy round. 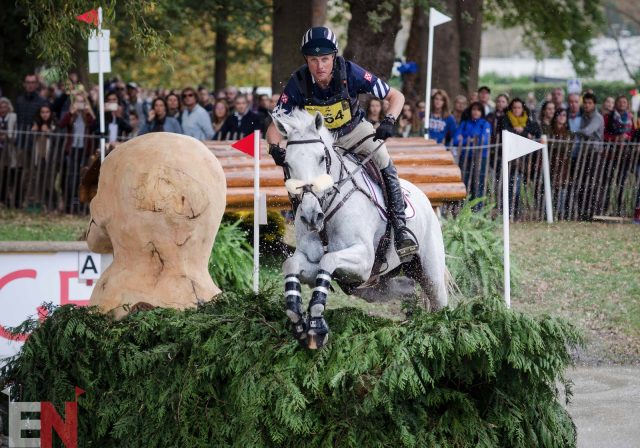 Boyd Martin and Crackerjack at the last water complex on course at Pau. Photo by Tilly Berendt.

Refusals and eliminations are the low ebb of the rollercoaster ride of eventing, but they can be recovered from, learned from, and used to progress. The true heartbreaks of the sport are the moments you can’t recover from, when, despite the biggest of hearts and the best of preparation, the journey must end. Boyd Martin‘s experienced partner Crackerjack put in a beautiful, confident trip around the testing cross country course, but a fluke step at the end of the course caused multiple breaks in his pastern, and the difficult decision was made to euthanise him.

“I felt like it was one of our best ever trips together,” Boyd said in a statement. “We were jumping clear and took all the direct routes, and coming into the final stretch in the arena, he had plenty left in the tank. He felt fresh and his ears were pricked, and I was thrilled with the way he was going.

“Just as we went into the arena he took a horrible step, almost on false ground. I heard a crack and instantly knew something was wrong. I pulled up and leapt off within a couple of strides. I knew Crackers was in bad shape.”

For the full statement, click here. All of the Eventing Nation team send their deepest condolences to all those connected with this incredible horse. These are the stories we wish we never had to write. 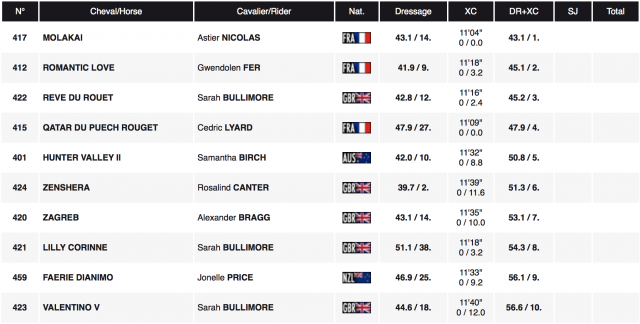 The top ten after cross country at Pau.