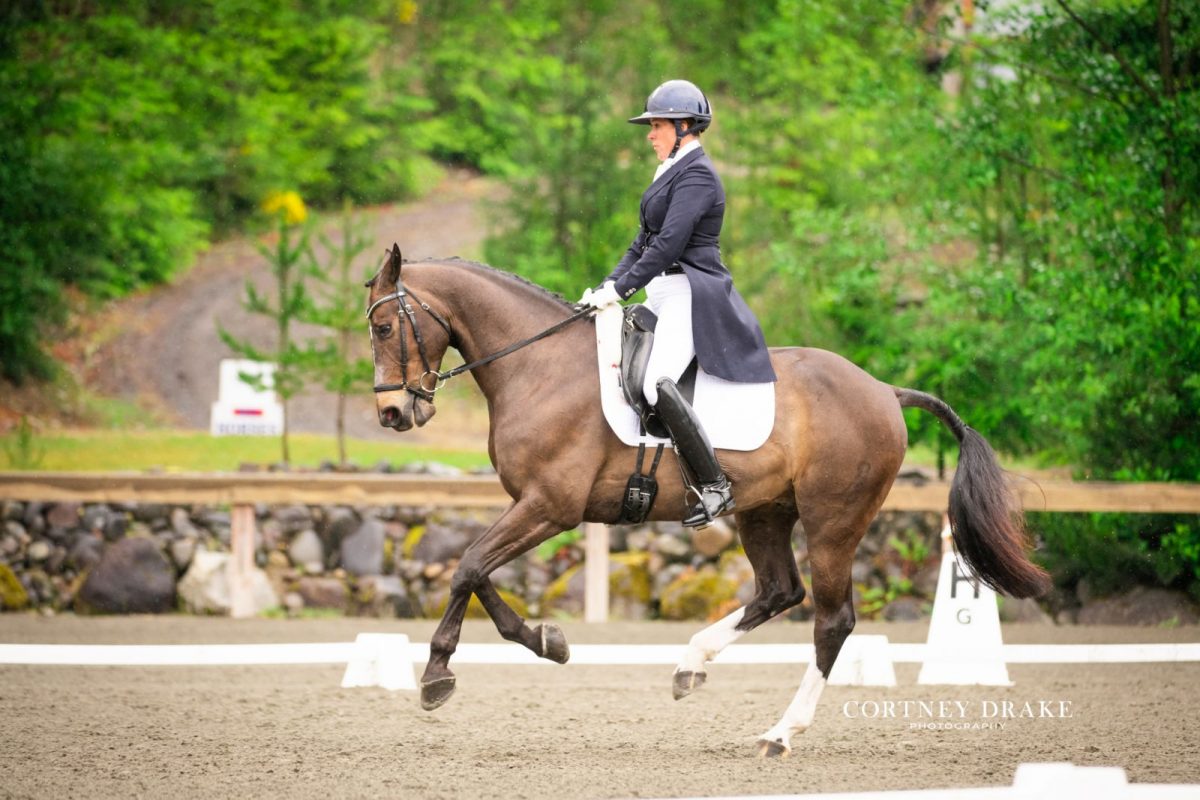 On Friday Aspen Farms in Yelm, WA welcomed three hundred and thirty horse and rider combinations to the first horse trials they have hosted since September 2019, due to the COVID-19 pandemic.

Auburn Excell Brady of San Juan Capistrano, CA and BSP Tuxedo, a 12-year-old Oldenburg gelding co-owned by Excell Brady and Larry Sawyer, lead the CCI3*-Short on a score of 26.9.

“It’s been a journey with this horse,” said Excell Brady. “He’s very spooky. He has all the movement and ability, but sometimes can be stiff and tight through his ribs and hard to get the suppleness that I want, so overall I was really pleased–he was very rideable today.”

Excell Brady feels good about facing the show jumping course on Saturday. “I have a really good show jumping coach, Morley Abbey, who has been helping me, and we’ve had a couple breakthroughs recently,” said Excell Brady. “Hopefully it will carry through tomorrow; I’m excited about that!”

Young Rider Hayley Turner of Alamo, CA and her Irish Sporthorse gelding, Shadow Inspector, are currently second in the CCI3*-Short on a score of 27.1.

“He was very consistent,” said Turner. “We could have had a little more energy, but he was very good today.”

Alexis Helffrich of San Ramon, CA and Graceland’s Lincoln, a 10-year old Oldenberg gelding owned by Peggy Moore, are in third on a score of 28.6. 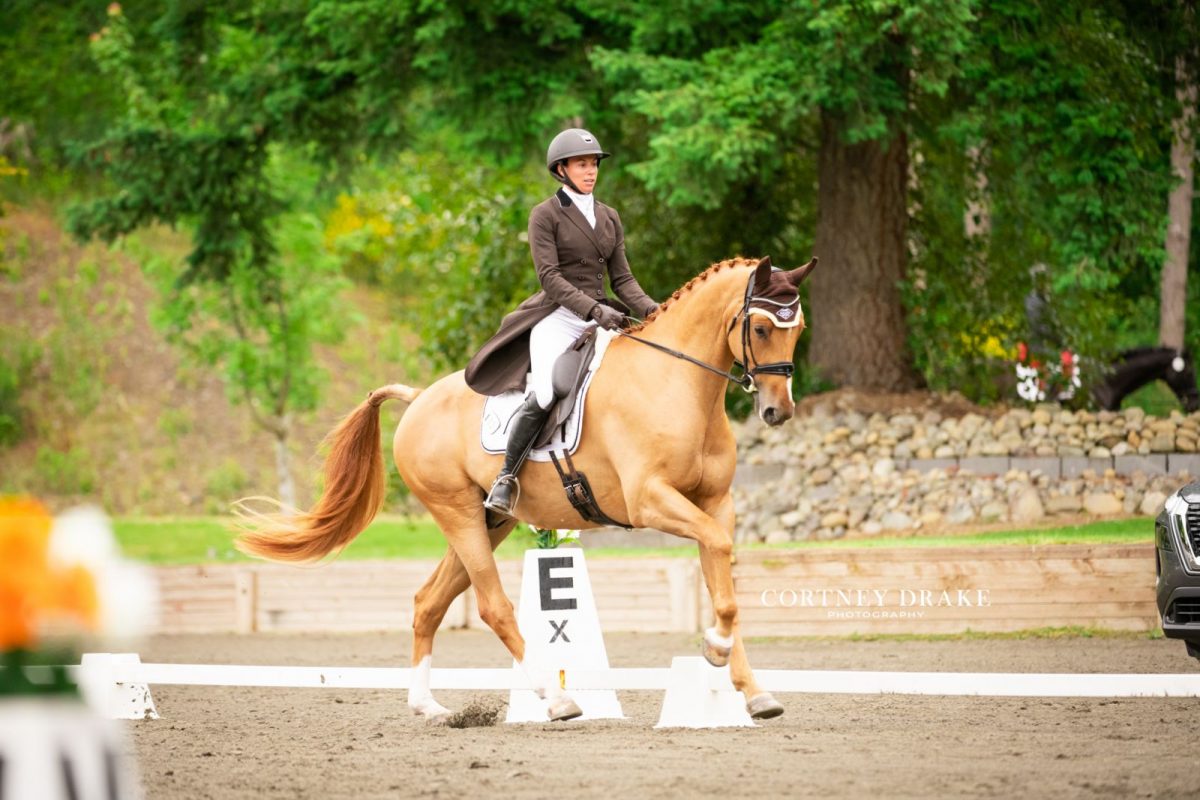 Twenty combinations also started in the CCI2*-S, and after dressage competitors from California are sitting in the top three spots.

Marissa Nielson and Global Absolute (pictured above), owned by Black Diamond Partners, LLC, scored a 23.8 to earn the top spot overnight in CCI2*-Short.

“He was really good,” said Nielson. “We’ve been working hard. He’s a new horse to me. We had a really steady test in the 2*-Long at Twin Rivers in April, so we tried to add a little more pizazz to it today and the judges liked it.” She is excited by the 7-year-old Mecklenburg gelding’s prospects this weekend. “I’d like to thank his owners, Black Diamond Partners, Becky and Jim–it wouldn’t be possible without them!”

Amber Birtcil and Keep Calm, owned by Cellar Farm, are sitting second on 24.3, two points ahead of Tommy Greengard and his own Dutch Warmblood gelding, Joshuay MBF, in third on 26.3.

This is Keep Calm’s first time competing at the two-star level. “I’m super happy with him,” says Birtcil. “He’s only six, so he can be a little bit green, but he was super today. He really fills up the full-size court.”

Birtcil feels optimistic about show jumping tomorrow. “He’s a good show jumper,” she said. “He can be a little spooky, which will hopefully work to our advantage!” 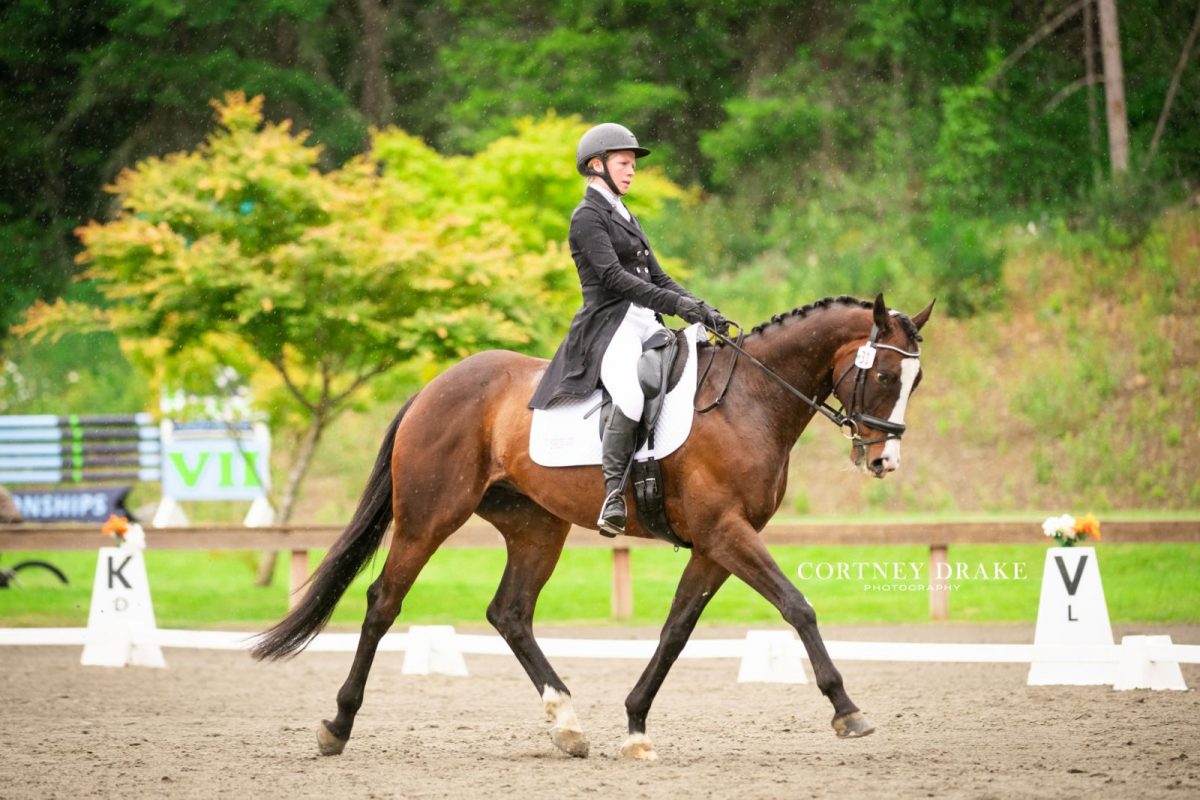 Aspen Farms was selected as one of the venues for the new Adequan®/USEF Eventing Youth Team Challenge (YTC) in 2021. The YTC is open to competitors aged 25 years and under and is designed to offer more athletes the opportunity to participate in a team environment, mimicking the Nations Cup Series.

“We’re excited to host the Adequan/USEF Eventing Youth Team Challenge,” said Show Organizer Jonathan Elliott. “Although it’s in its first year, we hope the program is going to grow, so we’re making a big effort to do it right and make it special for all the youth riders that are involved.”

Five youth riders are vying for YTC placings in the CCI2*-Short and three youth riders in CCI3*-Short. They will be eligible for individual YTC awards in their respective divisions this weekend.

Hayley Turner and Shadow Inspector are the best scoring YTC pair in the CCI3*-Short after dressage. “It’s really cool to be a part of [the Youth Team Challenge],” said Turner. “I’m interested to see how it progresses throughout the year and hopefully be on the team for the 3*-Long at Galway at the end of the year.”

Turner is followed in the CCI3*-Short YTC placings by Alina Patterson and Flashback who scored 31.1, and Sophie Click and Quidproquo who scored 31.2.

After dressage Melissa Nice and her own Thoroughbred gelding, Fun and Games, lead a small Open Intermediate division on a score of 26.7. In the Preliminary Rider division, Madison Langerak and Normandy Kivalo, owned by Kelly Langerak, lead on a score of 23.3. They are followed by Reese Blinks and I’m Jaguar in second on 29.4 and Kristen Davignon and Furst Floid in third on 29.6.

In the Open Preliminary division, Karen O’Neal and Clooney 14, owned by Annika Asling, are tied for first with Jordan Linstedt and her own mare Lovely Lola, co-owned with Bridget Brewer. They both scored 23.3. Karen O’Neal is also in the third-place spot overnight with CC Golden Ears, owned by Sara Shone, on a score of 25.4.

This is Lovely Lola’s first attempt at Preliminary after a successful Modified run at Spokane Sport Horse Spring Horse Trials in May and winning all four of her Training level trips in California earlier this season. Linstedt said she feels the mare has improved since the Modified test.

“With the leg yields and prep her balance was a lot better,” said Linstedt. “I thought the test today was very smooth–a little bit conservative because she’s a big moving horse in a smaller ring, so it’s harder, and I had to go a litte bit slower. But her trot was much more through, her balance keeps getting better, and she gets stronger each month.”

The lowest score of the day was earned by Sarah Lorenz and her own HiLite STF, who delivered an impressive 18.1 in the Beginner Novice Horse division with 20 starters.

“It’s exciting to be back after taking last year off,” shared Show Organizer Jonathan Elliott. “There’s a lot of extra work to get done, but it seems like everything came together well. I think the courses designed by Morgan Rowsell turned out quite well.”