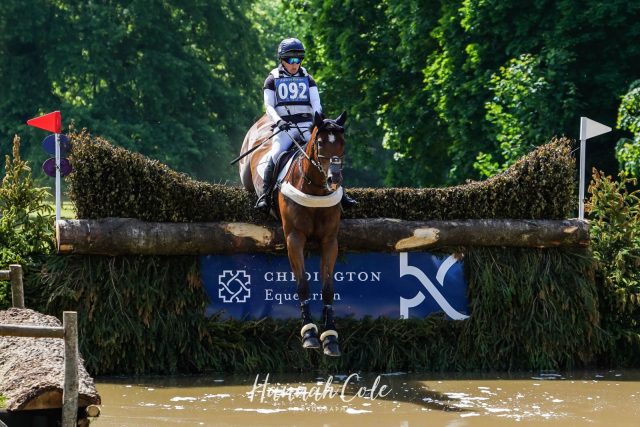 Laura Collett and Mr Bass sit in the top ten after a classy effort across the country. Photo by Hannah Cole Photography.

It feels like it’s been an awfully long time since we saw a truly tough and influential cross-country day in Britain, and that’s fair enough – since the start of the pandemic, many of the country’s top venues have had to temporarily close their doors and sport itself was shelved for a significant period. That means that horses and riders were largely unable to get in the prep runs and mileage they ordinarily would; it also means that many long-standing international fixtures have had to move – at least temporarily – to new venues. As a result, designers, riders, and organisers don’t have the great benefit of knowing how the course and terrain tend to work together, and so each new course at the upper levels feels like something of a gamble, no matter how much experience is behind it. It has made sense, then, that designers have erred on the side of caution, creating fair and often encouraging questions to ensure that horses aren’t punished for trying their best. The sentiment though, certainly from the upper echelons, has been that tougher courses are needed.

Perhaps this is a case of being careful what you wish for. Bicton’s organising team and designers Helen West and Captain Mark Phillips were under plenty of pressure to deliver an influential course; Bramham, the fixture they’ve replaced, is known as one of the world’s toughest CCI4*-L tracks, after all. But even they likely wouldn’t have quite expected the dramatic unfolding of today’s cross-country action.

80 combinations left the startbox in the senior CCI4*-L class after the overnight withdrawal of eight entrants, most notably Kitty King and her CCI4*-L debutante Cristal Fontaine and Piggy March and Brookfield Quality. Both horses had been in the top ten following dressage. A further 34 combinations came forward for the CCI4*-L for under-25s, which ran after the main section. It’s when you look at those numbers in conjunction that the influence of the day becomes quite staggering: 35.7% of starters came home without jumping penalties, and 38.4% failed to finish.

Though most of the overnight discussion had focused on fence 15ABCD, a tough coffin complex featuring a bounce to the ditch and one stride to a tightly-sliced angled hedge, the question only claimed eight scalps through the day — a relatively low number in comparison to fence 10 (21 faulters) which was the second of two offset brushes, fence 24AB (20 faulters), a brush-to-arrowhead question on a downward slope. Fence 7AB, a colossal angle tree stump to a tree-trunk corner, caused issues for 15 riders, while 21AB, a drop down to an arrowhead, marred the records of a further 12. Beyond that, issues were sprinkled evenly across the course, with fallers as early as fence three and as late as the final fence.

It might sound like, well, total carnage – but perhaps this is what we’ve been missing. Not horse or rider falls, per se, because those certainly aren’t one of the indicators of great sport; but this kind of stamina and technical challenge feels so unfamiliar now that, perhaps, it’s a sign that we need to start on the path towards rebuilding those skills around progressively tougher courses, ready for the resumption of something like normal. 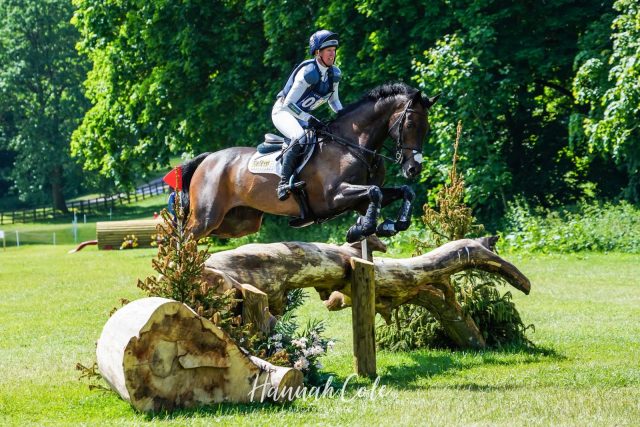 In any case, it’s made for interesting – and occasionally gasp-inducing – viewing through the day, with experienced and inexperienced combinations alike experiencing the full spectrum of triumph and disaster over the rolling Devon hills. At the end of the day, Nicola Wilson and JL Dublin remain the leaders, having added nothing to their dressage score of 28.7 – despite initially being award 15 penalties for a flag at 24.

“It took me completely by surprise, as I did feel that he was straight. I’m absolutely delighted with how he went — he just galloped and jumped,” she said of the 10-year-old Holsteiner owned by Mr and Mrs Lambert and Mrs Johnston. “Near the end of the course, I said ‘Come on,’ and on he went. He’s a super horse.”

Nicola has long fought for a win in Bramham’s feature class, as she’s the local darling of the event, but now, as it temporarily makes its way to the other end of the country, she finds herself in prime position – though with just three seconds in hand around tomorrow’s showjumping course. 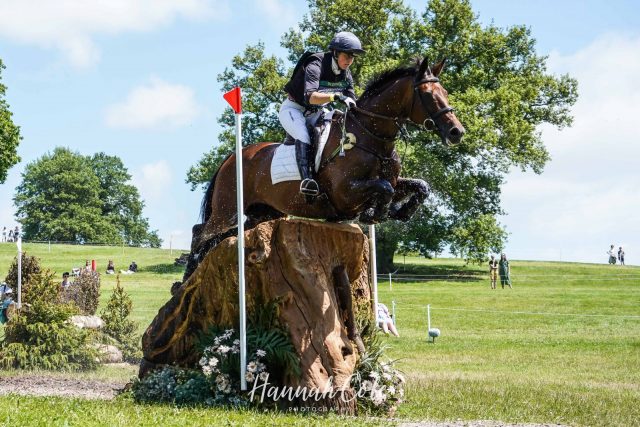 It’s been a tough season for Piggy March, not in terms of success, but when trying to consider a path and some end goals for her 2019 Badminton winner Vanir Kamira. But a reroute from her planned trip to Luhmühlen proved fortuitous as she ate up today’s tough track and climbed from seventh to overnight second.

“She’s such a little tiger, and I’m not ready to be done with her,” she says of the now-16-year-old mare, owned by Trevor Dickens. “She’s done nothing, really, for eighteen months except for little events [as a result of us] not knowing where she’s going to. I wasn’t that keen on coming here and dropping her down a level, but when I saw the course I realised it was tailor-made for her. She just gets her head down and goes – she says ‘let me get on with it, mum’.” 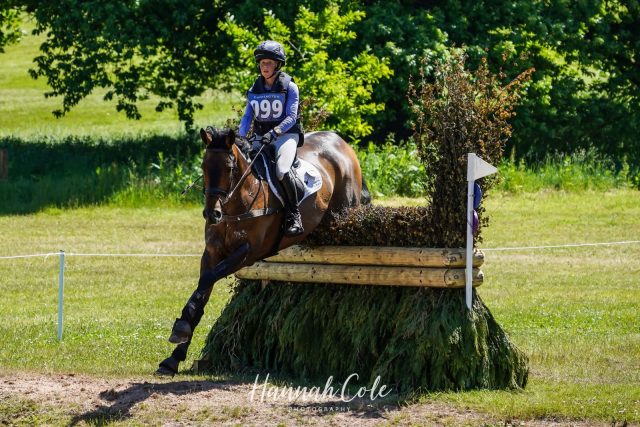 Rosalind Canter‘s remarkable young Lordships Graffalo stepped firmly into the spotlight when winning last month’s Aston le Walls CCI4*-S, a replacement for the same class ordinarily held at Chatsworth, and today, too, he proved he’s some extra special, romping home five seconds inside the time to slot into overnight third. 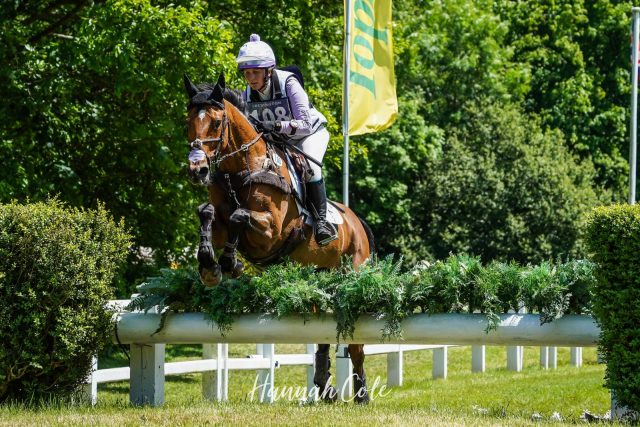 Behind him, Gemma Tattersall posted her second clear inside the time of the day with Santiago Bay, fourth, after having soared through the finish line a remarkable 27 seconds inside the time on first ride Chilli Knight, tenth provisionally. 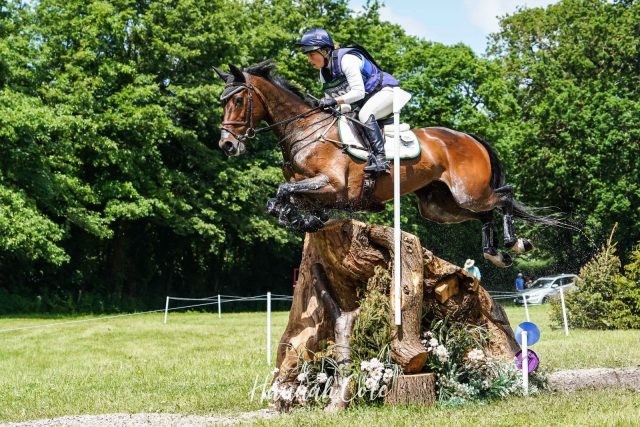 Kirsty Chabert‘s five-star campaigner Classic VI made light work of the track, coming home two seconds inside the 10:08 optimum time, while Laura Collett and Mr Bass gave one of the earliest indications of the course’s rideability when they notched up just 2.8 time penalties. 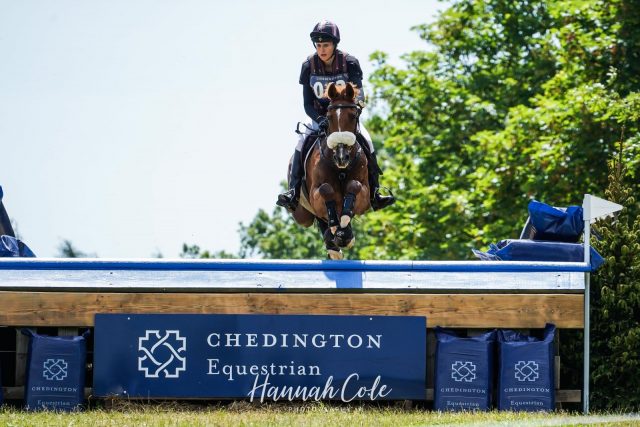 Sarah Bullimore proved why homebred Corouet was selected for the Olympic longlist as a reserve, despite his relative inexperience, when he matched Mr Bass’s time and quality around the course to step into overnight eighth place. 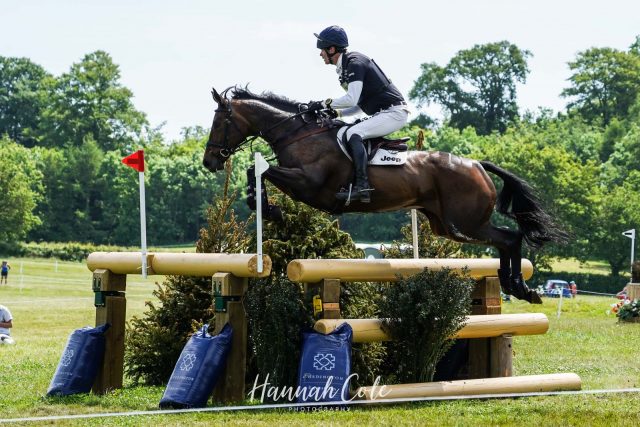 Behind her, William Fox-Pitt‘s young mare Grafennacht matured demonstrably around the track, giving William exciting ideas for the future.

“She gave me such a lovely ride – and I’d hoped she would, as she’s a lovely horse,” he said. He was full of praise for the tough track, saying, “it’s a superb course – [the designers] have been brave and it’s a great step up; it’s really testing the kind of horse you’ve got. Now, my dear Grafennacht will be thinking about a five-star.”

In the CCI4*-L for under-25s, an emotional Bubby Upton finished the day in first and second place with Young Rider medallist Cola III and Cannavaro, respectively, after having jumped clear rounds on each horse. 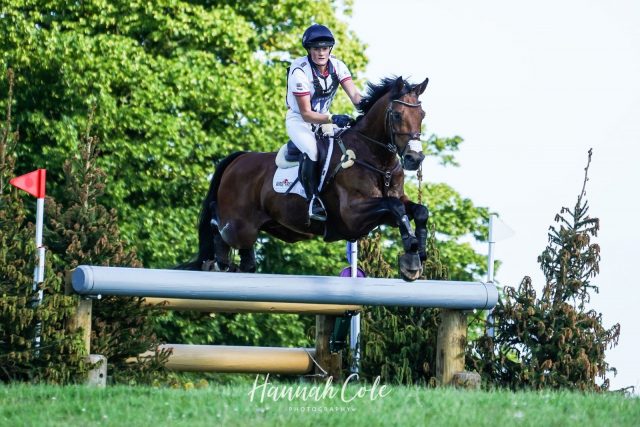 “I can’t quite believe it – he was amazing and I’m so proud,” she said after her first round aboard Cannavaro, which came after watching the drama of the main section unfold. But for Bubby, a seasoned competitor for her young age, her system was well in place and unshaken by what she saw.

“You can watch too much and change your plan everywhere, but I actually went with my plan the whole way around,” she says. “I try not to watch too many – I watch a a few good ones and then go and try to make it happen.” 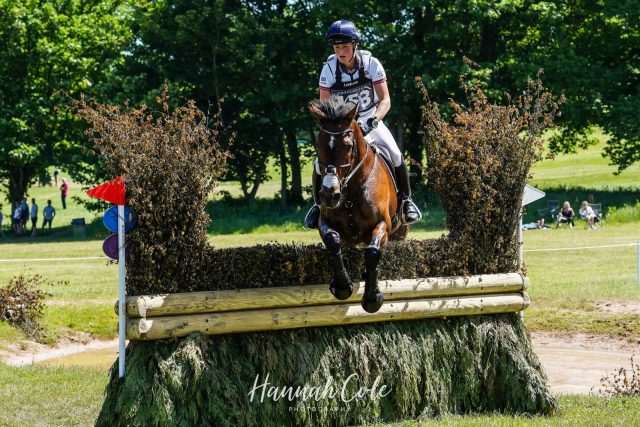 At the forefront of her mind, instead, was her horses’ stamina while tackling the tough, hilly track.

“I was really worried about [Cannavaro’s] fitness; I’d done a lot of galloping at Newmarket, and without that, he’d never have got round today. At the last hill, I thought I’d give him plenty of time but I pressed him and he just responded, so I thought, ‘here we go!’” 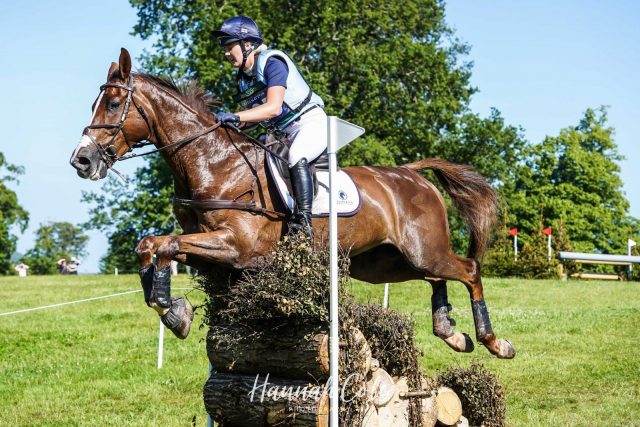 After taking over the lead from Yasmin Ingham, who opted for some tactical long routes to produce her young horse Banzai du Loir for the future and now sits fourth, Bubby broke down into rare tears.

“[Cola] is amazing — just the horse of a lifetime,” she says after delivering the only clear inside the time of the section with the gelding. “He means the world to me; I’ve had him since he was six, and he’s taken a bit of time to establish himself at this level, but he keeps on pulling it out of the bag over and over again. He’s some horse — I say it time and time again, but he really is. Up that last hill I said, ‘come on mate!’ and he dug in so deep; they both did. I’m so lucky to have them.”

For Bubby, who balances a professional eventing career with her last year of university, horses are a true family effort — and part of the family, too.

“When they try that hard for you, you can’t help but just love them to pieces,” she says. “They’re part of our family; I don’t have many horses because I’m at university still, so I can’t have many – so when they do something like that for you, it’s so special.” 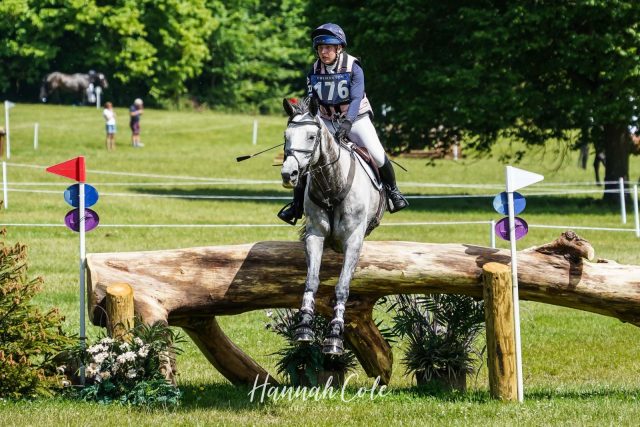 At 21, third-placed Heidi Coy is one of the youngest riders in this class, aboard one of the youngest horses at nine in Russal Z – but nonetheless, they delivered the second fastest time of the day, adding just 4.8 time penalties and making mature, gutsy decisions throughout the course.

“She was really good – she just answered every question I asked of her,” says Heidi. “She sees the flag and goes. she wouldn’t be the best galloper, but she’s really learnt over the years – I saved a bit in the tank for that last hill and she just flew.” 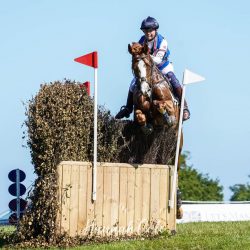 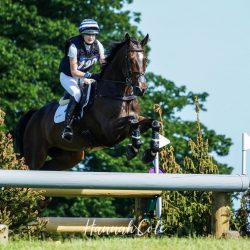 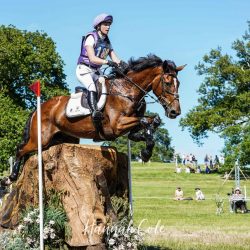 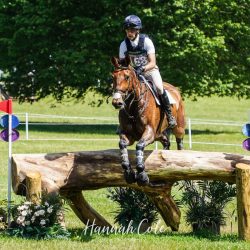 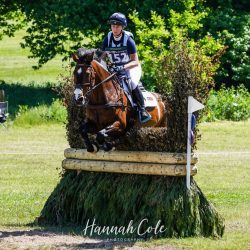 The top ten after cross-country in the CCI4*-L for under-25s.

Tomorrow sees us head into the final horse inspection for both classes, which will take place from 9.30 a.m. BST/4.30 a.m. EST before moving on into the showjumping finale. The CCI4*-S class, incorporating the British Olympic selection trial, will tackle cross-country with a new leader at the forefront: Tom McEwen and his 2018 Pau winner Toledo de Kerser are out in front after dressage leaders Laura Collett and London 52 pulled a rare pole showjumping today. Take a look at the top ten as it stands, and we’ll catch you on the flip side!

The top ten after showjumping in the CCI4*-S.