Getting to a CCI5* is always an enormous undertaking — but never more so than in a pandemic year. Our own Tilly Berendt is on the road to Luhmühlen with Great Britain’s Mollie Summerland and her horse Charly van ter Heiden – and she’s documenting the whole journey as it happens. Welcome to part three: in which the girls discover that horse heaven does, in fact, exist. 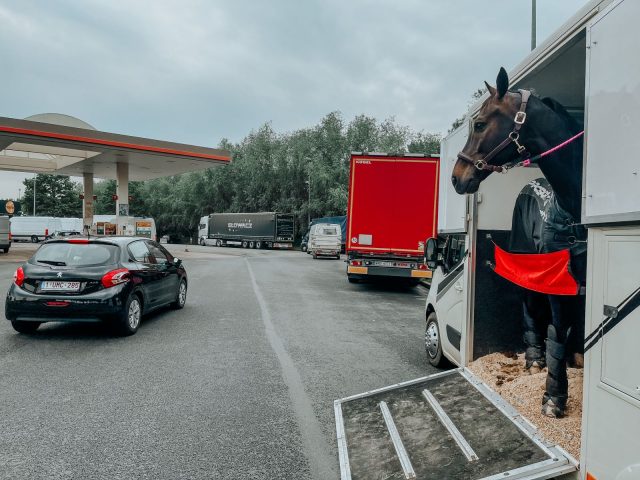 The internal monologue of the happiest horse on earth: “ooh, petrol station grass! My favourite!” Photo by Tilly Berendt.

What do you get when you combine two twenty-somethings, a horse who embodies the ‘big smile’ emoji at all times, and a big adventure on hardly any sleep? Giddy delirium – and sausages.

“I’ve got us dinner!” Mollie shouted across the forecourt of a Belgian petrol station, where we’d planned out a much-needed coffee stop and a chance for Charly to stretch his legs and get his head down. (This, as an aside, is one of my favourite parts of travelling horses long distances – as a reformed theatre kid, my latent yearning for a stage and a spotlight gets to stretch its legs in those delicious moments when I get to balance a coffee and a fag in one hand and hang onto a top-level competition horse in the other, while grandiosely telling everyone who wanders over for a closer look that the horse is one of the very best IN THE WHOLE WIDE WORLD. They all inevitably walk away thinking they’ve just met some great racehorse, because it turns out you really can’t explain eventing to the average trucker.)

Anyway, back to that dinner. Though Mollie and I have been eventing friends for a while (by which I mean, that great category of pal who you’ll always have a lovely natter and often a drink with out at competitions), we’d never spent any prolonged time together prior to this trip. Naturally, that means we’re learning a lot about one another – and one thing I learned nice and early is that Mollie loves the sausage. Big ones, small ones, spicy ones, rubbery German ones that burst out of their casings: shelve those shameful thoughts, folks, because I’m referring wholly and absolutely to her culinary preferences, which I discovered when she reappeared in that forecourt having done an entire provisions shop from the scant offerings inside. Inside her bag was our one-way ticket to scurvy central – pizza, chips, and the most extravagant, bulging sausages I’d ever set eyes upon.

In the headlines this week. I’m inclined to say that Boris Johnson’s sausage offering is nothing on the EU’s. I say this as one of a pair of wholly unbiased diplomats, of course.

Lest I come across like the resident health freak of the trip, my own contribution to our meal plan was a pack of hermetically sealed chocolate-covered waffles – when in Belgium, and all that, right?

From Belgium it’s just a hop, skip, and a jump over to Breda, our end destination — or so Google Maps claimed, anyway. As it happened, we got caught out by Antwerp’s aggressive traffic. At this point, I think Tim Lips – who was kindly checking in on us through the trip, despite being away at a competition himself – wrote us off as lost forever.

When we did finally arrive at Lips Stable (after some intense last-minute negotiations: “This isn’t a road. This doesn’t look like a road,” protested Mollie; “That’s because it’s a driveway, mate,” I replied, hoping I hadn’t just navigated us down a non-road we couldn’t get back out of) it was with that air of gleeful insanity and utter, bone-wrenching exhaustion that only a truly epic adventure can produce. Of course, we had to figure out how to get in – “it’s the gate that looks like a prison gate,” said Tim, which prompted a fierce debate over how prison-y on a scale of one to ten we reckoned each gate looked – before we were rescued by Gino and Gosia, two of Tim’s stable staff, who helped us to get Charly (still, predictably, looking delighted about everything) settled in before giving us the grand tour. 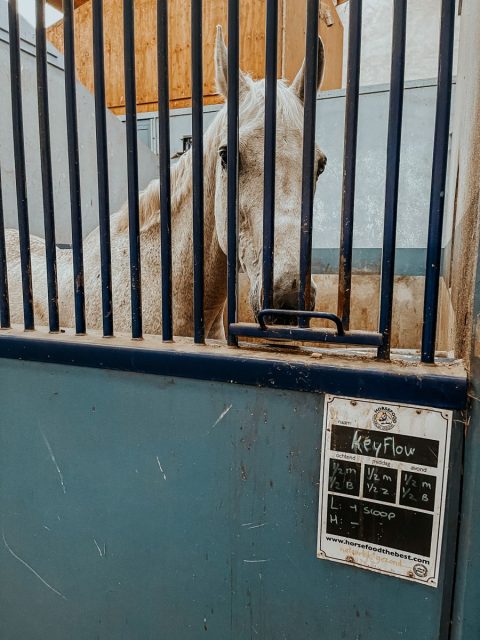 Perhaps the first hint that this was about to be the coolest stopover point ever came just as we entered the capacious indoor barn. The first horse I spotted as we turned into our aisle was Keyflow, now 24 years old, half blind but bright-eyed and curious. To be perfectly honest, I hadn’t even realised the old boy was still going – so having him as part of our welcoming committee was a particularly special moment. Produced to four-star by Tim Price, he then enjoyed a stint with Germany’s Anna Siemer before joining Tim Lips’s string in 2011, and together, they successfully contested two European Championships, a World Equestrian Games where they won team bronze, and a smattering of five-stars, with a seventh-place finish at Badminton 2014 – probably the toughest Badminton in recent memory. In short, the old dude is the kind of chap you’d love to find yourself in a long chat with in a pub, if he was human. Alas, he’s not, and so we’ve had to settle for Tim instead. 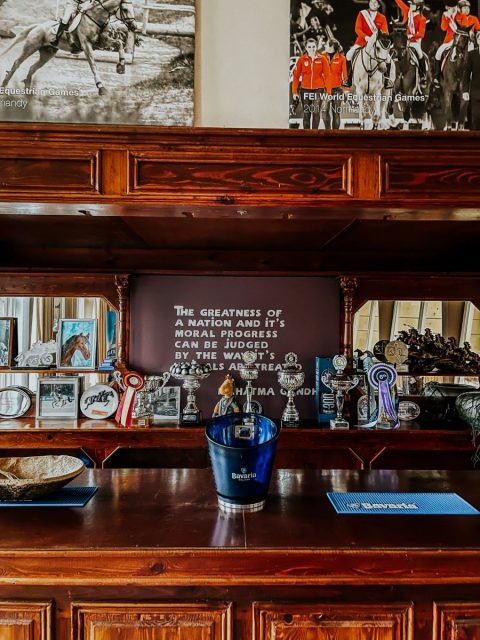 I’m willing to ignore the erroneous possessive apostrophes there, because this is definitely the best office I’ve ever had. Photo by Tilly Berendt.

With Charly happily tucked into bed, Gino was our tour guide as we navigated the rest of the huge barn. You can often tell which country – or at least, continent – a yard is based in just by looking at the layout, in my experience: Americans favour wide-aisled internal barns, the UK largely utilises boxes around a central outdoor area, and many stables in the northern European horse hub are sprawling things, with all-encompassing internal facilities, often set around an indoor school. That’s how Tim’s place is, with an outdoor dressage arena, plenty of turnout, and a jam-packed cross-country course in which he builds tricky lines he’s seen at competitions, many of which are quickly rearranged when he’s teaching one of his regular clinics. But the piece de resistance? A huge lounge and viewing area, complete with a bar, fully-stocked drinks fridge, a terrace, a kitchen, a TV the size of a small horse, and countless memories of his extraordinary achievements over the years. 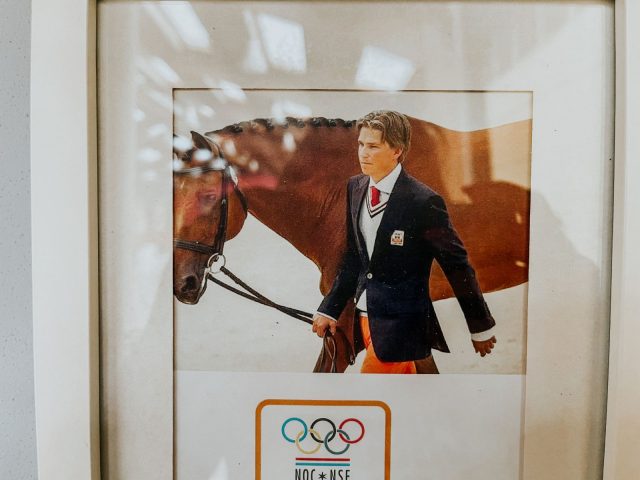 His most extraordinary achievement? The curtains.

I like to think my overjoyed reaction to the lounge would have been justified in any case, but in this situation, it was the best possible place to find ourselves. You remember, of course, back in the first instalment when I mentioned that we’d swapped Mollie’s big lorry for a much more compact, two horse one? The kind of size that doesn’t tend to have a full living area? You see, in the grand spirit of getting it done, Mollie and I had created a tiny camp in the back, where we were able to convert two seats into a bed that isn’t quite a single, but certainly isn’t a double, and we’re living in there without having hooked up to electricity and using every available nook and cranny (including the bathroom) as storage. Spending our days on the yard, making the best possible use of available electricity, wifi, and delicious, lovely space is the ultimate godsend, especially in the blazing heat we’ve suddenly been blessed with. There’s only so long two smelly horse girls can be within a foot of one another, after all, even when they have fully embraced the idea of old-school, make-it-happen eventing. 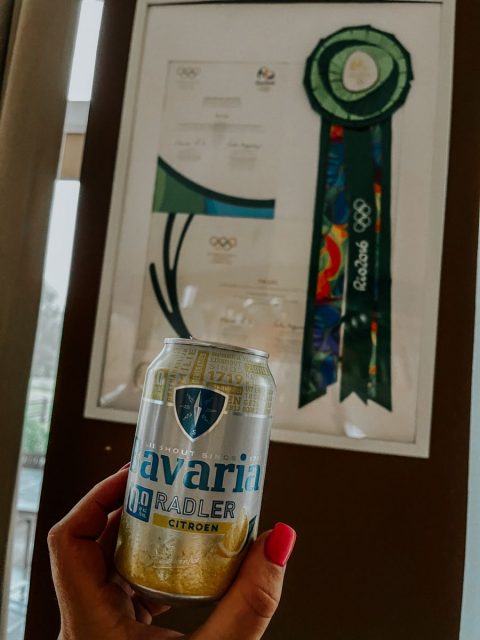 Free drinks from Tim’s sponsor, Bavaria – a delightful, but alas nonalcoholic, beer company. I endeavoured to find another way to make myself ridiculous, stat. Photo by Tilly Berendt.

There are two things I know with full confidence will utterly flummox me whenever I go to a new place: the shower and the microwave. Here, we were able to add the oven to that list, and poor, long-suffering Gino was kind enough to allow us to continually interrupt his Julia Roberts-based Netflix sesh to help us make midnight pizzas and direct our truly abysmal chat in his direction. The hot topic of the evening? Mollie’s life-changing discovery that not every accent she would hear in the Netherlands was, in fact, Dutch. We embarked on teaching her about where Gino was from.

“Are you Italian? Are you German?” she asked, looking bewildered.

“Do you know the continents? This one’s Europe,” I said.

“Yeah, and there’s South Africa, and…”

“She’s a really good rider,” I said to Gino.

“I’m from South America,” he told her encouragingly.

“What? You don’t sound American at all!” she replied.

“South America,” I gently explained. “There’s a North America and a South America. Well, and a Central America, arguably, but let’s not overcomplicate things.”

“No. No, hang on, absolutely not,” she said. “That’s not an American accent.”

Mollie promptly pulled up YouTube on her phone and started playing videos of southern American accents. A thick Texas drawl filled the kitchen.

“That is NOT your accent,” she told Gino firmly.

“But he doesn’t sound American!” she insisted.

“No you’re not,” replied Mollie. 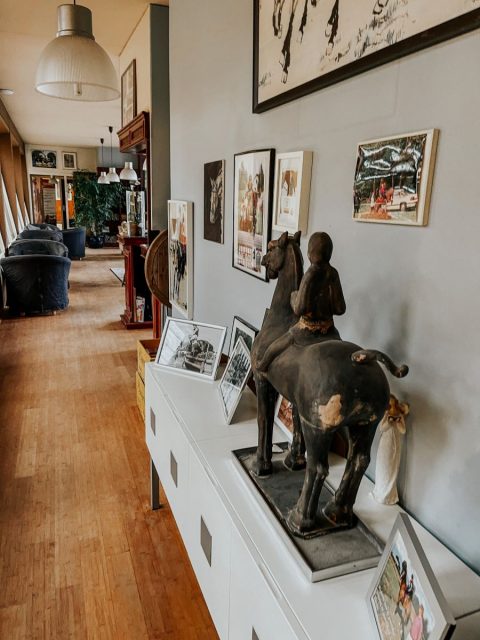 Eventually we relieved poor Gino of our presence – for that night, anyway – and went to make our little nest a home and catch up on some seriously overdue sleep. The next day would be a big one: in the evening, our new host would be home from his competition, and in the meantime, there was riding to be done and sausages to eat. So, so many sausages. 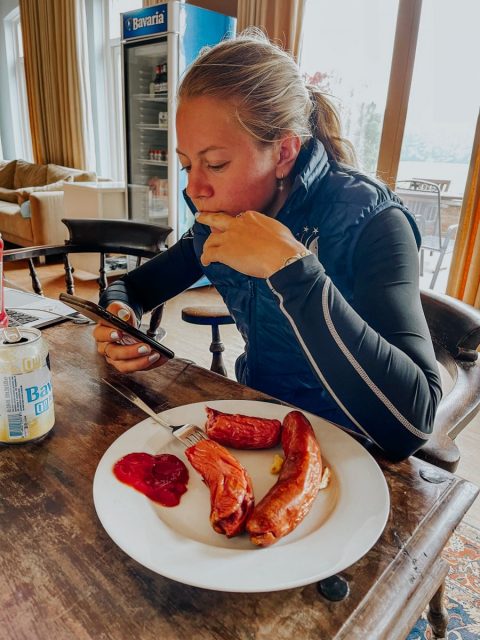 The diet of a champion. Photo by Tilly Berendt.

Exercise-induced muscle damage that results in sore, stiff muscles and poor performance is a common problem in athletic horses. Vitamin E plays an important role in preserving optimal muscle function by interrupting the production of harmful free radicals that can damage critical tissues. When vitamin E levels in muscle tissue are inadequate, the risk of exercise-induced muscle damage is increased. Elevate® Maintenance Powder supplies the natural vitamin E your horse needs to neutralize damaging free radicals and support peak performance. Keep your horse at the top of his game with Elevate natural vitamin E.
The horse that matters to you matters to us®.
Not sure which horse supplement best meets your horse’s needs? Kentucky Performance Products, LLC is here to help. Call 859-873-2974 or visit KPPusa.com.