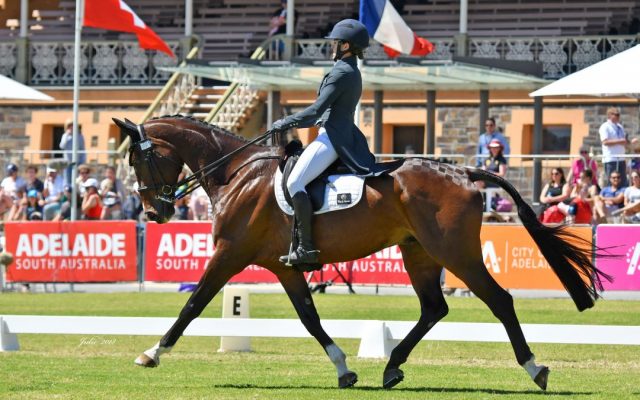 One and a third point separate the top three after the Australian International Three-Day Event’s dressage phase. Leading the way are Katie Taliana and Trevalgar II, her own 14-year-old British Sport Horse gelding (Fleetwood Opposition x The Wexford Lady, by Fire Blade), on a score of 31.0.

“He is amazing,” Katie says. “He is such a good boy and will do anything I ask of him. He’s been a bit tricky over the last 12 months, but he was back to his normal self today.”

2018 marks this pair’s second crack at the Adelaide CCI4*, having finished in the top 10 last year. The 31-year-old Aussie has been hard at work at it since then, having been named to Equestrian Australia’s Generation Next High Performance Eventing Squad and securing a couple top finishes at the three-star level. While working for Zara Phillips in the UK several years ago, Katie purchased the horse for £1,000 and later brought him back to Australia, developing him from the one-star level forward.

Asked how she feels about sitting in the top position after day one, Katie says, “I’m a bit excited — I’m stoked actually! The first time I came here, I really wanted to do well in the dressage and I came fourth. This year he has just gotten better and better, and I’m really excited.”

Looking ahead to cross country, she says, “The cross country course is tougher than last year, but she’s going to have to be confident and stick to her plan. Cross country is Trevalgar II’s favorite, so she’s looking forward to it.”

In second place on a score of 31.5 is another Aussie lady, Emma Bishop, with CP Issey Miyake, her own 10-year-old Australian bred Thoroughbred/warmblood cross mare (Staccato x Isabella Rossellini). Named after a brand of perfume (stable name: “Rose”), this is her first outing at the four-star level.

Emma is also a member of the EA Generation Next High Performance Eventing Squad. She first competed at Adelaide in 2002 when it was a three-star and won the Adelaide CCI2* in 2017 on Warrego Marco Polo. Her last Adelaide CCI4* outing was 10 years ago in 2008, and we’re happy to see her back at the tip-top of the game.

Rounding out the top three on a 32.3 is Lauren Brown with Skys Da Limit, and off-track Thoroughbred gelding (Hurricane Sky x Our Cutey, by Carry A Smile).

Lauren says the horse had a checkered past before hitting his stride as an eventer. “He was skinny and useless as a race horse,” she says. “He came 25 lengths last in his first trial and just got worse from there. But I just had a connection with him — it has never happened with any other horse, but I thought, he is going to be good. Everyone thought I was crazy as he was skinny and out of proportion, but I knew he was going to be good.”

We’ll be back later today with a preview of Mike Etherington-Smith’s cross country track, which winds through the picturesque East Parklands.