EN’s contest from our sponsor OCD and Doc’s Products Inc. invites you to share your rehabilitation stories with us. We’ve had some wonderful entries so far, and entries are still open, so don’t forget to send your story to [email protected] for your chance at a prize pack from OCD. 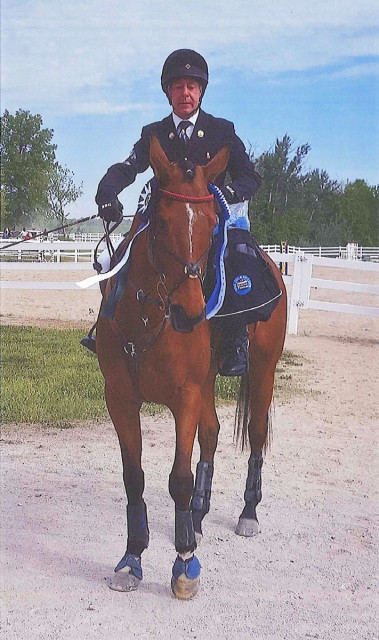 My horse, Country Schoolin, made a miraculous comeback from not one but two life threatening illnesses, and now we are working towards qualifying for the American Eventing Championships.

In the fall of 2014 while living in Virginia and entered for our first event in the state at the Virginia Horse Trials, I noticed Country was not looking very good and did not want to eat his breakfast.

My first thought was colic, so I gave him Banamine and proceeded to lunge him, a method which had worked really well for me with other horses. After awhile he seemed to perk up, but later that day he was running a very high fever — 107 degrees. I phoned the vet, who was there in 20 minutes. She confirmed my findings and said we needed to get Country to Blue Ridge Equine Clinic to be checked out, as she did not think it was colic.

Two hours later we arrived at their beautiful facility where we were met by some super staff members. The vet checked him out and said he thought Country had Potomac Horse Fever. They would need to do some tests to confirm it but said it was crucial to keep a watch on him and monitor his foot temperature, as a main side effect is foundering in all four feet.

We got home about midnight and got a call from the vet early the next morning saying he wasn’t doing much better. They were giving him Banamine split into two doses morning and night but said if he wasn’t any better by the end of the day they would need to give him blood plasma. He had blood plasma the next morning, and by the end of the day he was starting to perk up — though he wasn’t out of the woods yet. Five days later we were able to take Country home where he had some nice rest.

In December, we moved to Oklahoma where we got back into work getting ready for our first show in May. We placed fourth, just outside getting an American Eventing Championship qualifying score. I was so excited because Country did so well that I thought we might have a chance at qualifying for the last AEC in Texas.

Then one day I noticed he wasn’t hanging around the other horses in the pasture. I went out to feed a couple of days later and he had blood coming out of both nostrils. I called the vet and took him in, where they scoped him and hit me with the bad news. The vet said he was going to call Oakridge Equine Hospital and tell them what he thought. In the meantime, I was to load him in the trailer and hope he would still be alive when I got to their facility two hours away.

The vets told me I had two choices: treat it with an anti-fungal medicine that did not have a high success rate or operate and put a catheter between the sack and the artery to cut off the blood supply to the sack and kill the fungus. The decision was easy, although I wasn’t sure where we would get the money since we had just paid nearly $4,000 for Country’s last illness and this was going to cost even more than that.

Thankfully, the surgery was successful and Country had most of last year off to fully recover. We started back in work at the end of September and entered our first show at the same venue where he made his comeback after the first illness, but the outcome was even better.

I have been eventing for 40 years and my best dressage was 29.9 a few years ago. I have worked really hard trying to get into the 20’s and only had the one score. At our comeback competition, Country and I got a 25, went clean cross country and had one rail in stadium to finish second. We just need two more clean cross country rounds and we will be going to Tryon to the AEC!

Some people questioned my decisions when Country was sick, but I knew what talent he had. I just had to be patient. We still have a long way to go as his confidence is not what it was but we will take our time. See you all in Tryon!