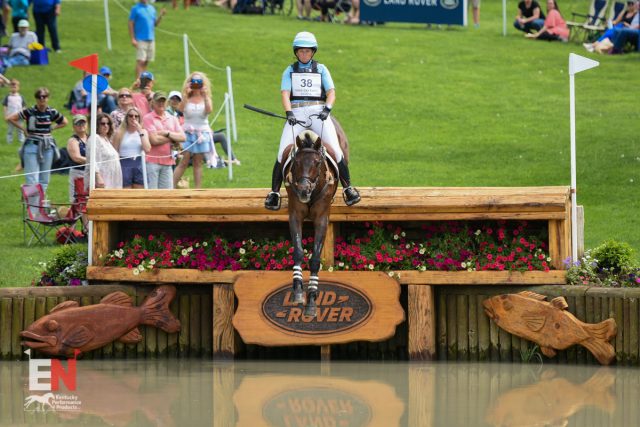 The no. 2 and 5 ranked eventers are joined by Olympian and former World Champs representative Clarke Johnstone, along with debutants Monica Spencer and Amanda Pottinger.

ESNZ general manager of high performance Jock Paget says it is an exciting team to name as the nation also looks towards the 2024 Olympic Games in Paris.

“It’s encouraging to have the combination of championship debutants and experienced campaigners such as Tim, Jonelle and Clarke in the team,” he said. “This is our qualifying opportunity for Paris and we are hopeful of contesting the medals. We’ve had a good build-up in terms of training and have invested into more team competition this year – hopefully, this pays dividends on the day.”

Two-time Olympian Tim will compete aboard 13-year-old Falco, a German-bred gelding who in 2021 won the 5* at Pau. Forty-three-year-old Tim twice rode at World Championships with an eighth in 2018 at Tryon his best effort.

He chuffed to be named on a team he describes as “positive, determined and ready to go to work”. 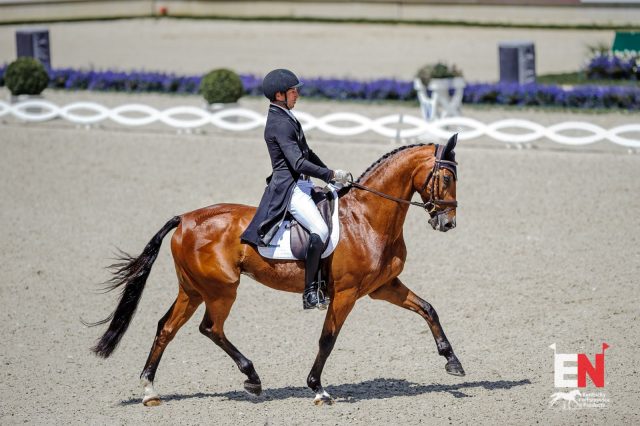 “We go there with earnest and optimism,” said Tim. “We will go in and do what we can all do on our best day and that could net us a good result. I am very excited to have a nice, classy horse to take in Falco.”

The final touches to training and fitness would now be made before the champs.
Jonelle is in on McClaren, a 15-year-old gelding who last year was third in the 5* at Pau, and in 2018 contested the World Champs with Sir Mark Todd.

The 41-year-old rider was New Zealand’s best at the 2014 Caen World Champs when she earned the moniker as the world’s fastest woman with her fourth placing. She has previously competed at three Olympic Games and two World Championships.

She’s confident the partnership she and McClaren have built up over the past few years is now well established. “He hit the big time quite early in his international career but I think now he has some really good mileage behind him and I am hoping we can go to Champs and play our part, putting forward a good team score,” she said. “Our preparation is going well and I am looking forward to getting down there. I am delighted for the owners David and Karie (Thomson) who have been huge supporters of equestrian sports and in particular our eventing team.”

Clarke Johnstone was New Zealand’s best at the Rio Olympic Games with his sixth-placed effort. The 35-year-old, who rode at the 2010 World Champs, has been named on Menlo Park, a Brit-bred 12-year-old who joined his stable late last year.

“I am absolutely thrilled to be back on a championship team for the first time since Rio,” said Clarke. “It has always been my biggest goal to represent New Zealand on these teams and I am excited to put my best foot forward at Pratoni.”

Menlo Park had gone from strength to strength this year, and Clarke hoped that would culminate with a solid score to help New Zealand secure a team medal. “I am also looking forward to teaming up with a great bunch of riders and horses. Now the hard work begins.”

Monica Spencer and Artist are just about to board a plan to wing their way to Europe in preparation for the World Champs. The 35-year-old from Taupo was third in the CCI4*-L at Werribee this year and has previously won at Puhinui.

Monica said she knew Artist was special when she bought him as a four-year-old, but to be named on a championship team was surreal. “I am very excited and proud to have the opportunity to represent New Zealand alongside such an incredibly talented group of riders,” she said. “I am very grateful to the people who have believed in us and been part of our journey.”

Rounding out the team is Amanda Pottinger and her 16-year-old New Zealand-bred thoroughbred Just Kidding. “This is what I have been working towards my whole career,” said Amanda. “It is an honour to be given the opportunity to ride for New Zealand at the World Championships. I had a great experience there at the test event so I am looking forward to going back.” 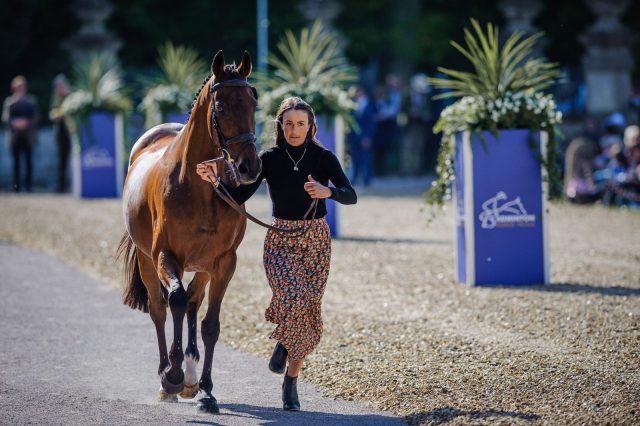 Amanda is following in the footsteps of her mother Tinks who rode at top level for New Zealand and was part of the bronze medal-winning team at the Seoul Olympic Games.
The reserves for the 2022 World Champs are Jesse Campbell aboard Diachello, Samantha Lissington with Ricker Ridge Sooty GNZ, Matthew Grayling on Trudeau, and Dan Jocelyn with Cooley One To Many.

New Zealand has twice won team gold at World Champs – at Stockholm in 1990 and Rome in 1998. The last time the team was on the podium was 2010 in Kentucky when Andrew Nicholson, Sir Mark Todd, Caroline Powell and Clarke Johnstone won bronze. Andrew and Nereo also won an individual bronze that year.

Individually, golds have been won by Blyth Tait and Messiah in 1998, Vaughn Jefferis and Bounce in 1994, and Blyth and Ready Teddy in 1998, the same year that Sir Mark and Broadcast News won silver. The Kiwi eventers were seventh at the last Worlds in Tryon in 2018.

The championships are being held at Pratoni, near Rome, in Italy. The first horse inspection is on Wednesday (September 14) with the dressage running the next two days, followed by the Giuseppe Della Chiesa-designed cross country and the Uliano Vezzani-designed showjumping. The venue has previously hosted the cross country for the 1960 Olympic Games along with the World Champs in 1998 and European championships.

The best three scores from the team will count towards the final score. Great Britain head into the event as the reigning champs. 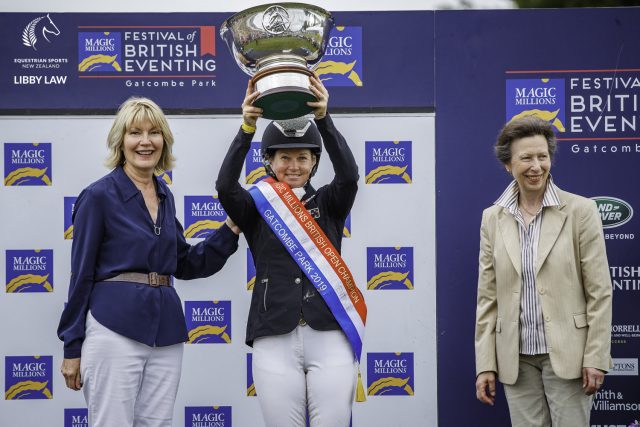 The Kiwi eventer was delighted with the efforts of the 16-year-old black British-bred mare she co-owns with Trisha Rickards. “It is the quintessential British event and I have never won here before,” she said. “It is Classic Moet’s cup of tea and is really vital Burghley preparation for us. Obviously, I have had a bit of a quiet year with her – she missed Badminton in the spring so I am just delighted to have her here, to put in such a good performance over all three phases and to have the win.”

She had plenty of praise for Captain Mark Phillips cross country course where she and Classic Moet were the fastest round of the day, adding just four time penalties.

“Mark is getting very clever at slowing us down,” she said. “When I came home with four time faults I thought I had done quite a lot to get that but I had some very fast guys to come behind me with Chris (Burton), (husband) Tim and Ollie (Townend), so I thought there was every chance someone might get it but testament to Phillips. It was a demanding track in all the right places – there were some real pinch points and certainly, Classic Moet probably showed all her experience and speed to do what she did today.”

Jonelle is now eyeing the prestigious Burghley Horse Trials next month. “It was very disappointing having to withdraw from Badminton in the spring but we don’t know sometimes why things happen and I keep looking ahead to Burghley and thinking maybe it is her year. It is just fantastic to have her here – she looks a picture of health and is obviously feeling very well. Hopefully, this really ticks the box in terms of our Burghley prep so we can consolidate from here and line up there in a month’s time.”

Jonelle and Classic Moet were eighth after the dressage and slipped to ninth after taking a rail in the showjumping but their brilliance shone in the cross country to finish on 35.6 penalties, taking both the one day crown and the £10,000 winner’s purse. In second place was Ben Hobday (GBR) aboard Shadow Man II on 37.8 and Nicholas Lacey (GBR) on Proud Courage rounded out the top three with a 40.8 effort.

The clock proved the undoing of many over the Captain Mark Phillips-designed course and with no one inside time, despite nine clear rounds. Tim Price and Xavier Faer had two run-outs at a brush corner early in the course and picked up both time and jump penalties to finish 12th. Tim had predicted after the dressage that Jonelle would be the one to take the crown. 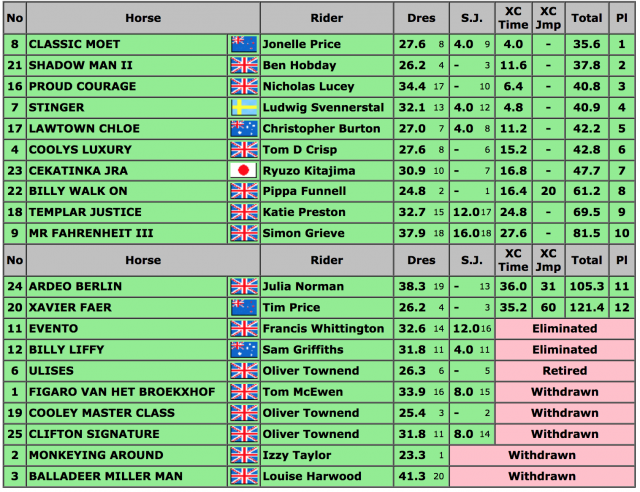