This week, in lieu of hanging out in a field in Gloucestershire ourselves, we’re going to be sharing some of our favourite Badminton content of years gone by, as well as some new pieces to keep the nostalgia train going strong. This time, we’re looking at Michael Jung’s trajectory from “that pretty good German guy” to “oh $h*t, he’s just won the Grand Slam”, first published back in 2016.

Winning the Rolex Grand Slam of Eventing is no easy feat, as proven by the fact that it has only successfully been done once, by Pippa Funnell in 2003. The Grand Slam was created in 2001, with the prize money being increased to $350,000 in 2008.

Not to say that some haven’t come close. Andrew Nicholson is the most recent to come tantalizingly close, winning Burghley in 2012 and Kentucky in 2013 but then coming third at Badminton.

Great Britain’s William Fox-Pitt also gave it a fair shot, winning Burghley in 2011 and Kentucky in 2012 but then finished fifth at Badminton in 2013 (the 2012 running of Badminton was cancelled).

We’ve staked our hopes high on Oliver Townend, who won Badminton and Burghley in 2009 aboard Flint Curtis and and Carousel Quest, respectively. The dream came to a harrowing end in Kentucky in 2010, however, when Oliver had hard fall from Ashdale Cruise Master.

Andrew Hoy is the other to come close winning Kentucky and Badminton in 2006 but losing Burghley that year. 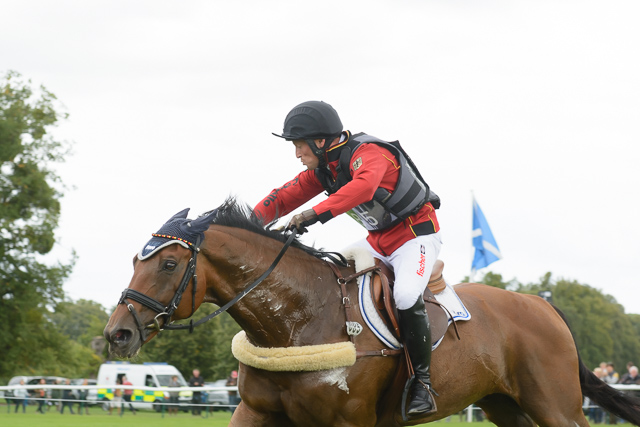 And so it comes down to a quiet German, one so modest and soft spoken that the label of “The Terminator” hardly seems applicable. The Terminator conjures imagery of a flint-eyed, hard spun individual whose chilly persona matches their accomplishments under pressure. The nickname is reminiscent of “The Iceman,” a name bestowed upon race rider George Woolf, who rode Seabiscuit with ice in his veins.

Yet to meet Michael Jung in passing brings up none of these images. Instead, you hear him speak of his love for his horses, and of how he does his best not to exude pressure upon them for fear of dampening their performances. You hear him speak of how he lets his horses dictate his plans, and how he treats every event — even one as monumental as this weekend — as “practice.”

But time and time again, he enters the arena with crushing pressure on his shoulders, only to deliver a near flawless performance every time. The accolades adorning his CV are overflowing: individual Olympic gold, individual World Equestrian Games gold, and now a Rolex Grand Slam trophy to add to the collection. 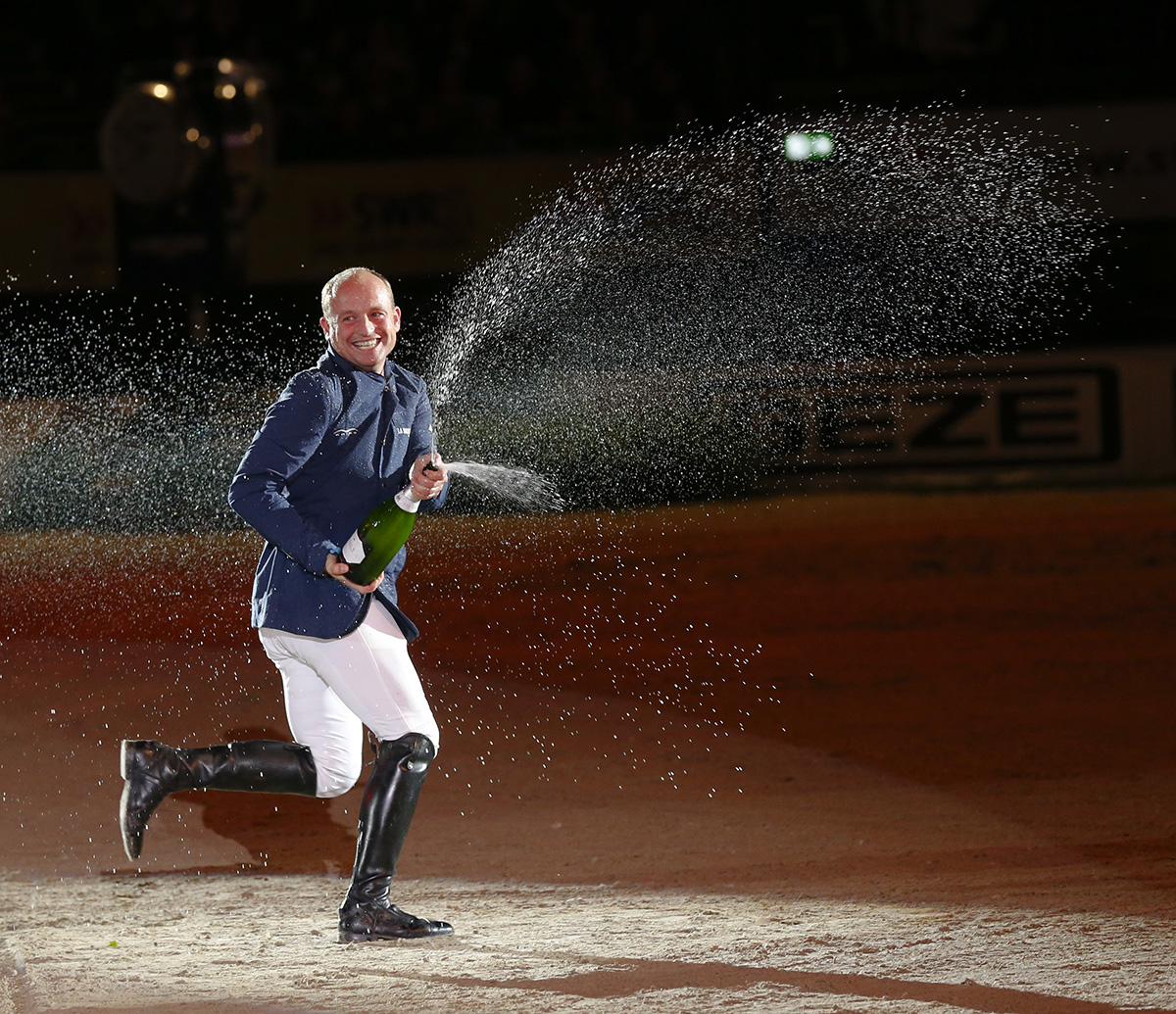 When I first put Michael Jung on my map, he had just won gold at the World Equestrian Games in 2010. Being relatively new to the sport, I thought, “Huh, this German guy is pretty good.” But left my thoughts at that.

And he kept winning. He made the London Olympics look like a schooling round in all three phases. 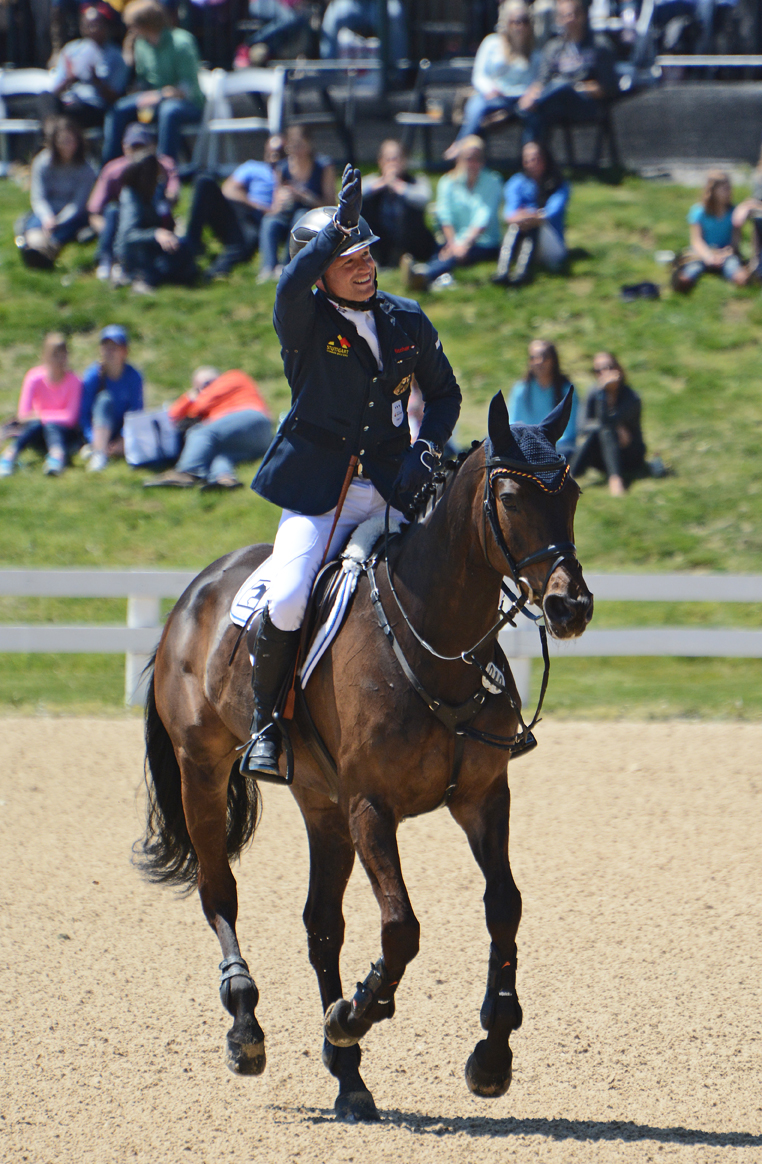 Then, his name popped up on the entry list for Kentucky in 2015, and we all but knew it would be a showdown between fischerRocana FST and La Biosthetique Sam. As history has it, Sam lowered two rails to eventually give Rocana the win, but we hadn’t seen the last of Michael’s self-proclaimed favorite.

It was hard not to hate him, if we’re being honest. We all strive for greatness within our niches in the sport. It’s hard to look at someone with as much success as Michael has and not feel envious. And if he were any less of a horseman, perhaps we’d be justified.

But to hear him speak for just a few minutes on his horses and on his training (the bits he does let on about, at least) will sway you if you were on the fence. His efforts and hard work behind the scenes have gotten him to this point. He is a true example of a horseman who makes his own way, which is perhaps the most admirable facet of this fairy tale.

When Michael and Sam won Burghley, the Grand Slam question began circulating throughout the eventing community. Could he pull it off?

Pull it off he did, with a handy win in Kentucky from start to finish aboard fischerRocana. A talented mare in her own right, it was scary to think that Sam was waiting in the wings for Badminton as his arguable top horse. 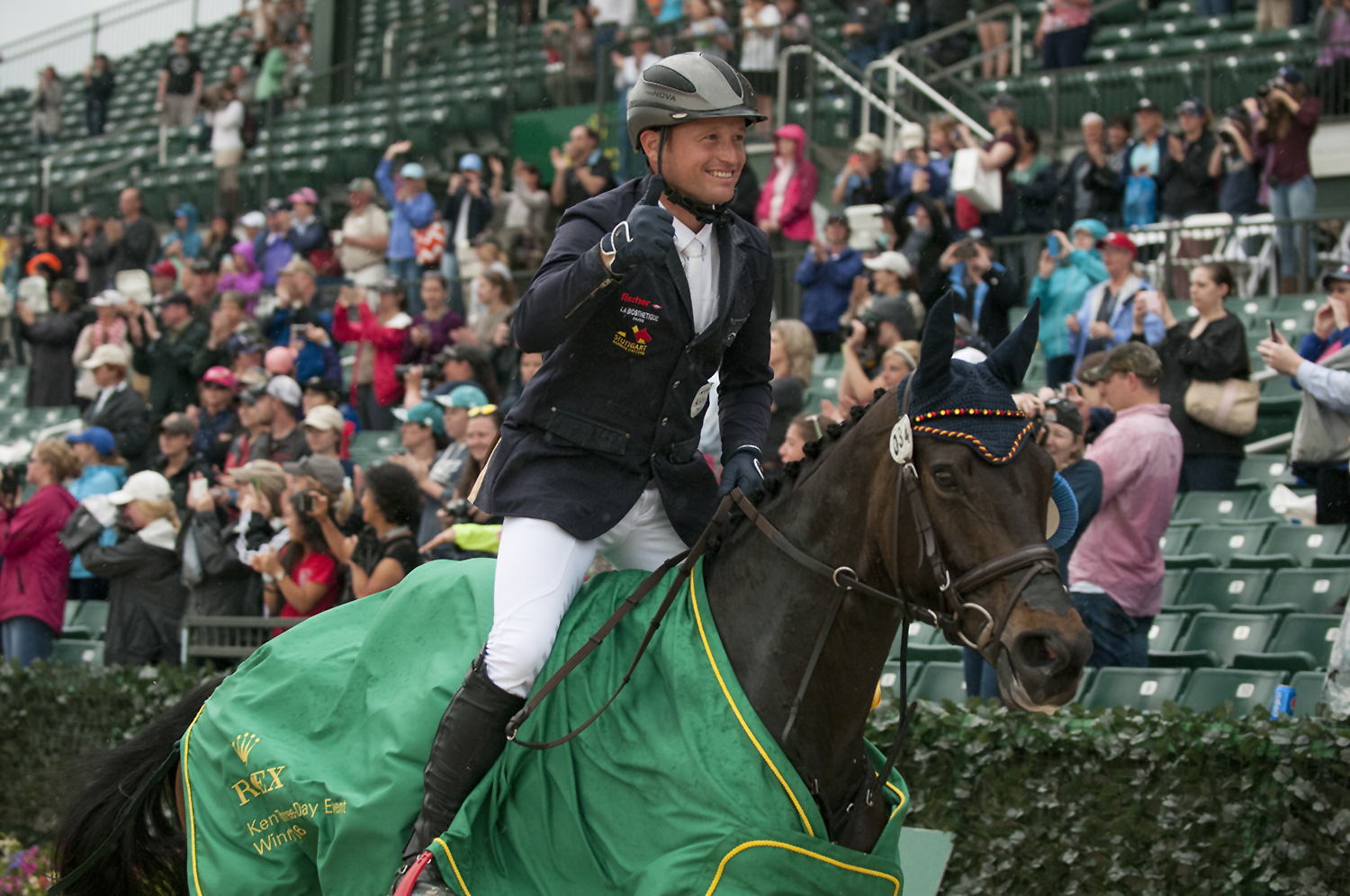 When cross country began and we saw the carnage that was happening on course, the nerves set in. Would he go the direct route at the Vicarage Vee? Undoubtedly so. Would he make it through that direct route? In fact he did. Would he stop the clock in time to hold his lead?

Even after missing Sam’s final gallop due to a flight mishap on the return from Kentucky, the horse came home absolutely full of run and several seconds under the optimum time. 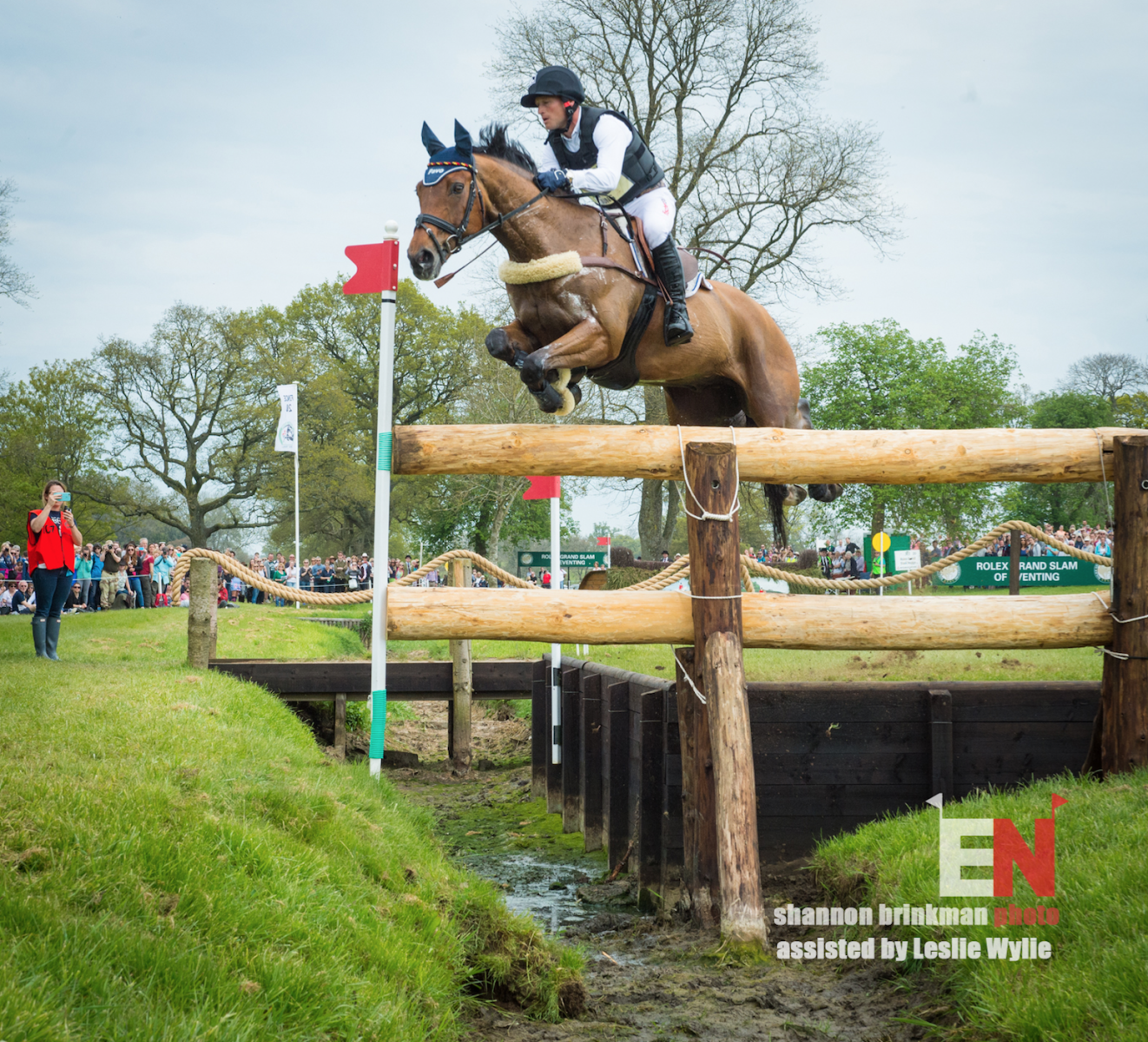 The man and horse to beat today. Photo by Shannon Brinkman.

And even today, the pressure was on. Michael had two rails in hand, and he had lost the win with two rails down in Kentucky last year. Historically, show jumping is Sam’s “weak” phase, if you could call if that. A rail scattered here and there, but those that did fall were expensive, as illustrated by this mural at Badminton.

Michael Jung and Sam had Badminton 2013 in the bag until a rail cost him the win. Today he’ll be looking for revenge, tenfold! The final show jumping session is just beginning… tune in! #MMBHT

The crowd held its collective breath with every leap that Sam made. With every canter stride, we all rode alongside Michael. We held our breaths over the treble and over several single fences that had taken hits throughout the day. Yet they all stayed up. Two fences from home, Michael had it in the bag. But we still held our breath, knowing that anything was possible.

He crossed the finish, and the Badminton stadium erupted. Never mind that a hometown British rider hadn’t ridden to the victory. Never mind that we’re essentially accustomed to seeing Michael win time and time again. Never mind. Today, we all rode with Michael Jung and his storybook horse, Sam.