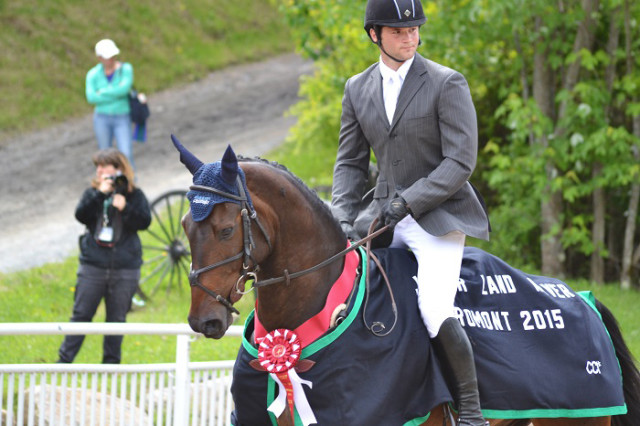 Beau Guimond and Filibuster ST after their win in the 2015 Bromont CCI1*. Photo by Leslie Wylie.

It’s been just a few months since 22-year-old Beau Guimond stepped down from his full-time working student position at Boyd Martin’s Windurra USA to set up his own business, but he’s already created a model that many fellow young professionals in the sport would be smart to follow.

And it’s all happened at a very busy time as Beau’s career is also taking off. He’s been making headlines all spring and summer with his talented 8-year-old Hanoverian gelding Filibuster ST, finishing second in their first CIC1* at The Fork in April and then winning their first CCI1* at Bromont in June.

Born in Hershey, Pennsylvania, Beau grew up in nearby Lancaster County, where he caught the horse bug in his first riding lesson at age 8. He adopted and trained an off-track Thoroughbred named True Lord from Penn National when he was just 12, about the time he decided to try eventing.

When his family moved to Mechanicsburg, just across the Susquehanna River from the state capitol in Harrisburg, Beau became an active member of Quentin Pony Club, where he earned his C-3 rating with his new horse, a Trakehner gelding named Otter, and competed at the USPC Championships and American Eventing Championships at Training level. 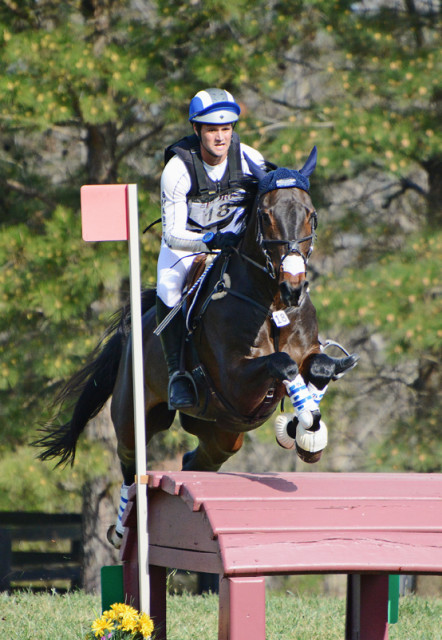 Beau Guimond and Filibuster ST at The Fork. Photo by Jenni Autry.

With Mechanicsburg about an hour and a half away from the heart of eventing country in Unionville, Beau started trailering out to take lessons with Boyd Martin, who Beau said would always make time to track him down at horse trials to coach and encourage him. That’s when Beau decided he wanted to go work for Boyd.

“It’s always been my dream to ride and train horses professionally,” Beau said. “It’s been my passion for a long time, and I wanted to give it a go. I really felt that interning with the best and riding with the best and seeing the programs that were used day in and day out would give me an upper hand on shaping my business, and that’s what I did.”

Beau started as a full-time working student at Windurra in 2012 after his graduation from Cumberland Valley High School, spending summers in Unionville and winters in Aiken soaking up every ounce of knowledge he could from Boyd’s program. This past winter while in Aiken, he decided it was time for a change.

“I had a couple people offer to buy me some horses and potentially go in on upper-level prospects together, and that was something I couldn’t do at Boyd’s,” Beau said. “I really enjoy working with young horses, so I was excited to pursue that. Boyd taught me so much, and I am incredibly grateful for the great start he gave me.” 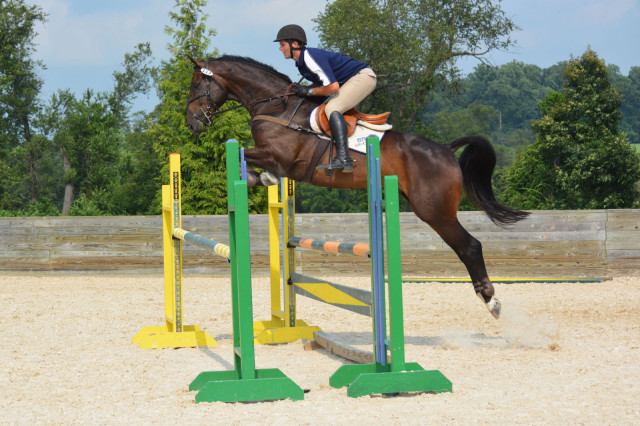 Beau Guimond and Filibuster ST in an Intermediate combined test at Windurra earlier this month. Photo by Dominique Guimond.

Beau is now renting stalls at Harry Smith’s Homestead Farms in Harrisburg, due west of all the action out in Unionville but at a significantly lower price due to the more affordable cost of living in the southcentral part of the state. And with a big chunk of the state’s eventing professionals clustered in Unionville, he’s also one of the only actively competing pros in the Harrisburg area.

“There aren’t that many people who compete in this area, and you don’t have tons of professionals,” Beau said. “Out in Unionville you have Boyd Martin, Phillip Dutton, Sally Cousins and so many more — it’s jam-packed, and the competition is crazy. I can’t really compete with that. But out here I have a market with the lower-level competitors and kids that want to come out and learn about eventing. I think it’s a great area.”

Beau also hopes being away from the hub in Unionville will help him secure more sponsors. He recently had Stübben come on board as his tack sponsor and also has a friend who designs custom browbands for his bridles. “It can be tough to promote yourself when you’re just starting out and competing against the big names, so it was a big deal for me to have Stübben come on board,” he said.

He currently has five horses in his program: rising star Filibuster ST and four sales horses, including Otter, who finished 11th in The Fork CIC1* in April and is now competing at Novice with Beau’s younger sister Dominique. The farm staff feeds and mucks stalls for him, and then he handles all other aspects of the horses’ care beyond that. Not having a full-time groom allows him to really get to know the horses from the ground up, he said. 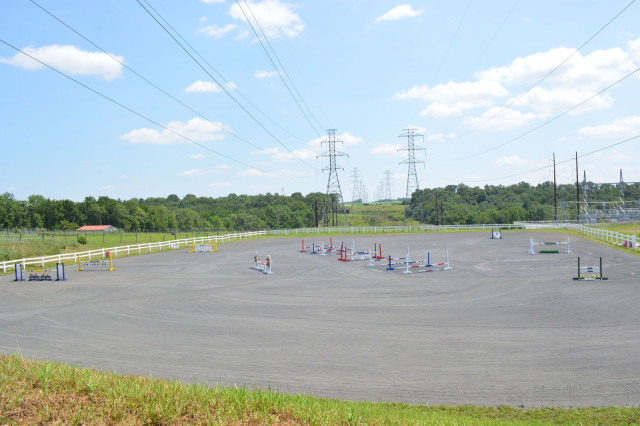 The jump ring at Homestead Farms, where Beau replaced the footing and built his own jumps to save on costs. Photo by Dominique Guimond.

“My program is very similar to the big names, but I would say it’s more hands-on,” Beau said. “Everything I do is with the horses. Professionals who have a large number of horses in their barns don’t have the time to be developing relationships on the ground. For people who want to be in a program with a more hands-on approach, that’s what I can offer.”

He’s actively competing the sales horses and Filibuster ST, who is preparing for a move up to the Intermediate level. Boyd helped him find “Buster,” bred in Canada by Sue Thompson (by Fidertanz out of a Weltregent H mare) about two years ago, and Beau has produced the horse from Novice level with much success. They won six Training level events in a row last year, and Buster was ultimately named the 2014 USEA Training Horse of the Year.

Beau said he is excited to continue producing young horses in the same way he brought along Buster, and he has space at Homestead Farms to expand to up to 10 horses in his program. He is actively looking for more horses to take in for both training and sales. He’s laid new footing in both the jump and dressage rings on the property, as well as built his own jumps — another cost-saving measure he said saved him a significant amount of money. 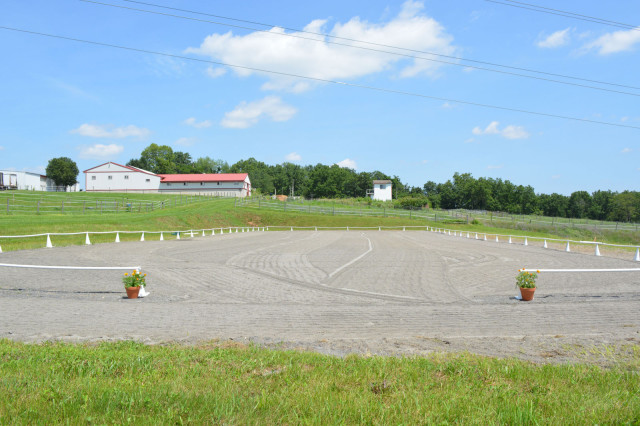 Beau also replaced the footing in the dressage ring at Homestead Farms. Photo by Dominique Guimond.

“When you’re just starting out, it’s so important to keep your expenses as low as possible,” Beau said. “You have to start stockpiling money together to put in to buying your own place at some point, and land’s not cheap. I also think it’s important to look to places where land is the most affordable. That’s why I picked Harrisburg, where land isn’t as expensive as Unionville.”

Beau said he owes a huge amount of thanks to his parents, Mike and Lynne Guimond, and grandparents, David and Marilyn Wagner, who also live in the Harrisburg area and are planning to go in on a farm with him to make Guimond Eventing a true family-run business. “They share this dream with me to own a farm, and I couldn’t do it without them,” he said. “I’m supporting myself, but they helped me get started.”

In the meantime, Beau plans to continue basing his operation at Homestead Farms and is actively looking for new clients and students for sales, training and haul-in lessons. If you’re in the Harrisburg area and want to support an up-and-coming eventing professional, check out Beau’s website here or give him a call at 717-991-5028. You can also follow Guimond Eventing on Facebook.