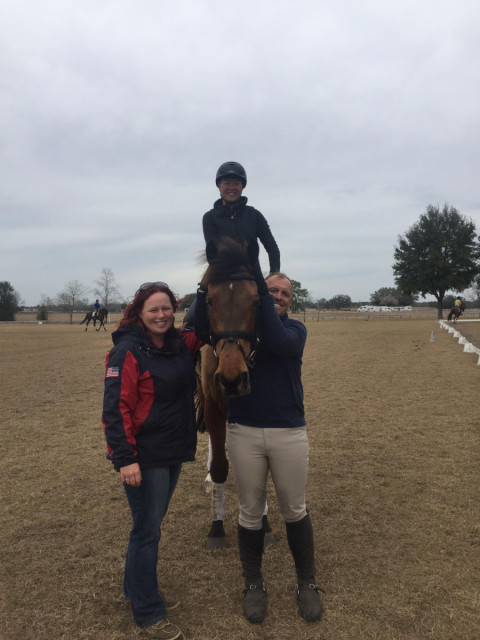 Cheesing like a child with Reggie, Buck and Kathleen. Photo by Kelly Dutton.

It all began during a simple conversation with Buck Davidson. A few of EN’s loyal readers had mused about what would happen if Buck were to wear a FitBit during an event weekend (when it’s not unusual to see him riding 10 or more horses), so I decided to ask him to wear mine at Rocking Horse II this weekend.

Being a good sport, Buck kindly agreed to that request and then threw me a curveball: “Come over to the farm anytime … you can ride Reggie.” Yes, THAT Reggie — Carl and Cassie Segal’s superstar Ballynoe Castle RM.

I asked Buck yesterday if he had some time for me to drop by the farm this week, which was followed by a phone call asking if I could be at his farm in an hour. Yep, sure can.

My coach, Kelly, and I arrived at Buck’s winter base in Ocala and immediately felt immersed in a different world. The farm itself is 600 acres, and Buck rents two of the barns, one for his horses and the other for his students who come down for the winter. There is a large jump field, a full dressage arena in another field, and a cross country field in addition to a 5/8 mile track and acreage as far as the eye can see for hacking and galloping.

In short, there is everything an eventer would need. The farm itself has a welcoming air to it — lots of friendly faces and happy horses.

Buck’s plan was to have his longtime student Woodge Fulton run through her Advanced test on Reggie before letting me get on, which meant we were able to watch Buck teach and ride for a bit before Woodge finished. Every direction you could crane your neck was a different upper level horse and/or rider out for a school or hack. There was truly not enough time to take everything in! 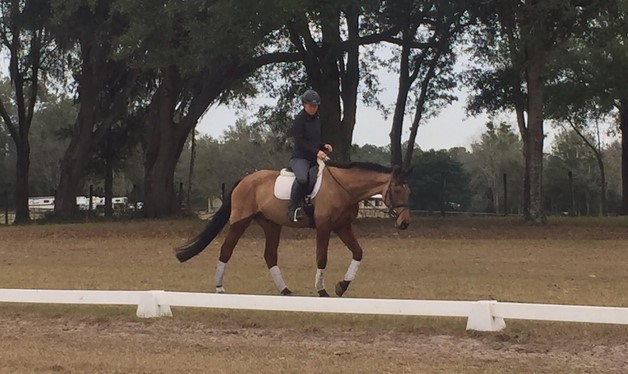 After Woodge got through her test, it was my turn. Let me stop here and say that I was a complete nervous wreck who was convinced that I’d somehow grab my outside rein too hard and immediately break poor Reggie. Or something equally illogical.

But before I knew it, I was getting a leg up and there I was, sitting on top of a horse that is the highest scoring horse in all of USEA history and has countless accolades to his name.

I walked around the dressage court and felt a bit sheepish, as I had no idea if I was expected to just walk around or if there was more to it. Truth me told, anything would have been fine with me — what more could I possibly ask for?

Then Buck turned from his lesson and told me to go actually ride, so I took up the world’s longest reins (once again, fear of breaking fancy horse) and trotted off.

So let’s just talk about the well-trained horse. This has been on my mind since reading a clinic report on Sinead and Tik’s Winter Camp, and Reggie is living proof of this concept. I am far from an upper-level rider, but Reggie will make you feel like you’re the best rider in the world.

I played around a little with the trot and canter (and super long reins) and could do nothing but smile like an idiot every time another passing rider said, “Isn’t he just the best?” I was soaking it in and thoroughly enjoying the experience. 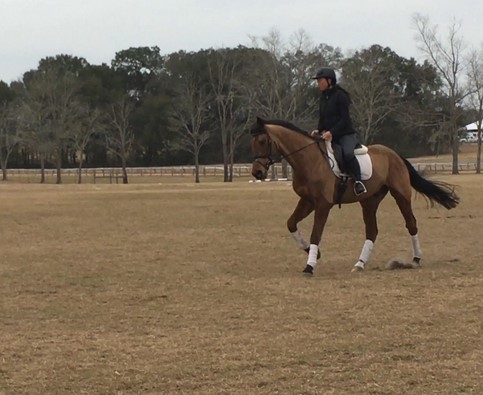 Demonstrating how to canter when you’re afraid of breaking a fancy horse — AKA with the longest reins known to man. Photo by Kelly Dutton.

Reggie is clearly one of the most loved horses in the barn. It’s a well deserved honor — he’s a perfect gentleman under saddle and on the ground, and it’s easy to see why Buck, the Segals and everyone else love him like a pet.

Once I successfully floated my way home, I took a moment to reflect on the opportunity the day had presented. It was definitely a once-in-a-lifetime opportunity, and I felt welcomed and not as out of place as I thought I would be among all of the upper-level riders. I may be a true amateur, but that day I felt as if perhaps the stars were not too far out of reach. 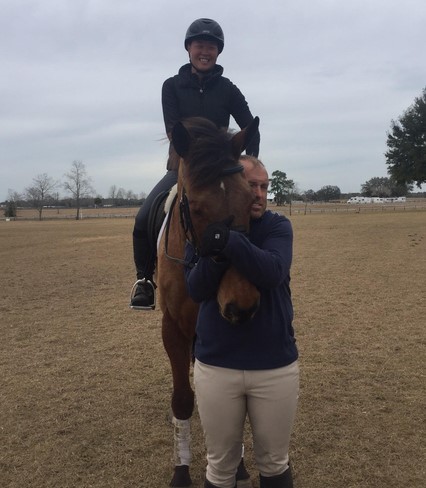 Many, many thanks are in order to Buck Davidson, super groom Kathleen Blauth-Murray, Carl and Cassie Segal, and everyone else who helped make yesterday special. It was a day I will surely never forget.