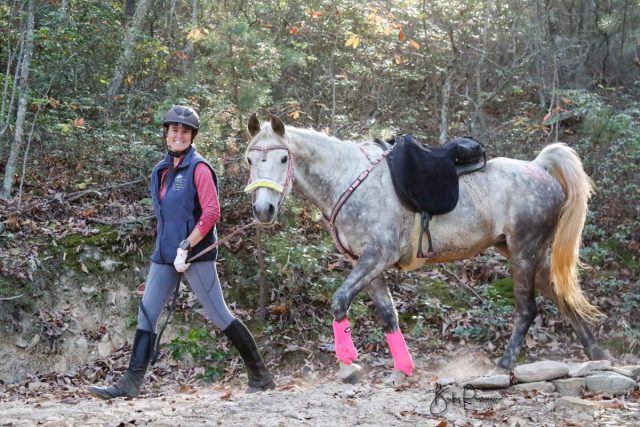 The sport of endurance riding is the ultimate equestrian test of stamina. Horses and riders spend hours racing across rugged terrain covering 20, 50, or sometimes even 100 miles, checking in with veterinarians along the way to ensure that the equine team members are fit to continue. A “hundred mile horse” garners a great deal of respect in the endurance world, and for good reason: a horse capable of completing a 100 mile ride must be innately athletic with sound body and mind. Additionally, the sheer number of training miles put into such a horse can seem enormously daunting to average rider.

One of the best-known 100 mile races in the country is the Vermont 100, which began in the 1960s not as a race, but as a “fun trail ride.” By the late ’70s the ride had become a well-established 100 mile race, starting and ending in Woodstock, Vermont. The race was discontinued for several years in the 80s but made its triumphant return in 1988, and in 1989 a new feature that makes the Vermont 100 unique from all other hundred mile rides in the country was included: race organizers asked Laura Farrell, the first woman to complete a 100 mile ride and a 100 run, if she would like to participate in the race on foot. She immediately agreed and was joined by over 100 runners at the 1989 Vermont 100. Since then riders and runners tackle the course side by side in a dual endurance ride/ultra-marathon.

As an endurance runner, I have become curious about the parallels between training a horse for distance events and training to tackle distances on foot. Angela Gross Kemerer of Myersville, MD and her horse Shae successfully completed the Vermont 100 in 2017. As the 2018 Vermont 100 approaches, they are preparing to do it again. To indulge my curiosity and learn a bit more about the sport of endurance riding, I’ll be following them along on this journey. I got the chance to chat with Angela and learn a bit more about her and her fabulous “hundred mile horse.” Angela and Shae. Photo by Becky Pearman. Used with permission.

While Angela spends her days working in human resources, her non-working hours are filled horses. A long time eventer, Angela took up endurance riding in 2015. She frequently rides with her husband, an experienced endurance rider with thousands of miles under his belt. It was through his endurance world connections that Angela was introduced to Shae, a now 10-year-old Arabian mare. It didn’t take long for the two to become partners in crime out on the trail and since bringing her home in 2015, they have covered 1,115 miles together including five 100 mile rides. All four off the ground! Photo by Becky Pearman. Used with permission.

When asked what initially initially drew her to the sport of endurance riding Angela replied “It seemed liked a great excuse to spend all day on a horse!” She is also inspired by the sheer athleticism possessed by these incredible horses. While she notes that her husband’s involvement in the sport was catalyst for her own journey into endurance riding, the enthusiasm and passion in her voice when talking about the sport is undeniable. Endurance riding is clearly in her blood just as the love of horses is in so many of ours.

Over the next several months, we will be following Angela and Shae as they prepare for this epic race, learning all about the world of endurance riding along the way. We couldn’t be more excited to be stowing away in the saddle bags of this dynamic duo during this ambitious undertaking, and look forward to seeing what waits for us down the trail. In addition to our Horse Nation updates, you can see more pictures of the our amazing endurance pair as well as some fun helmet cam videos from past rides on Shae’s Facebook page.