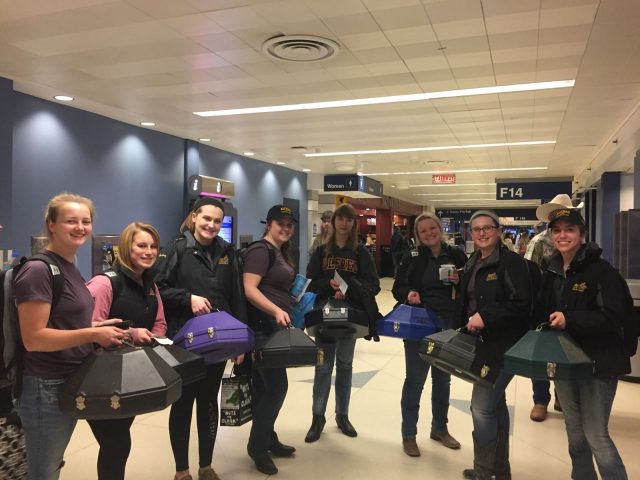 When traveling 1,500 miles with eight college equestrians, two old cowboys, their chaperone (our coach’s wife), the coach of another IHSA equestrian team (who also happens to be my mom), and all of our show gear (boots, garment bags in suitcases and hat cans), our group tends to draw considerable attention at airports.

At 4 a.m. last Thursday, we arrived at the airport in Buffalo as a stumbling herd with clanking spurs buried in our suitcases, groggy and clutching tickets for the three flights it would take to get us to Amarillo, Texas.

Once our first flight landed at a decent hour of the morning, when the airport’s other customers were more awake, we started getting looks and questions, the most common one being, “What is in those boxes?”

“Racing turtles” was our answer. At first, this response was probably unconvincing, mostly because the rest of the team burst out laughing as soon as one answered. Our first victim was the man who polished boots at Buffalo’s airport, the only coherent and conversational person we could find before sunrise. My teammate Ellie brought her hat can to him, asking, “Will you polish my turtle’s shell?”

A few hours later, in Newark, one woman (my parents’ age) seated at breakfast with a group of friends, asked us about our hat cans. “These are just our racing turtles,” my coach Harry said, deadpan. “We’re on our way to a race in Amarillo.”

“Ohhhhhh,” the woman replied, one drawn-out note of having learned some riveting new piece of information, wide-eyed. She nudged her friends, watching us walk by in awe. We didn’t make it out of earshot before dissolving into laughter.

The unsuspecting people we encountered during the rest of the day were subject to increasingly intricate descriptions of the contents of our hat can. Someone asked if our turtles were comfortable in there, to which we responded that they had food and water, and the containers were ventilated along the edges.

One man who stood next to us in line for our second flight laughed at us when we told him about the turtles. “No, I’m sorry, it’s just… are you serious? I don’t mean to offend you, I’ve just never heard of such a thing!” (“It’s alright, they won’t be offended,” I said, patting my hat can.)

He went on to ask us what size our turtles are. “Mine’s only about eight inches round; he’s just a year old, so he still has some growing to do,” I said. My teammate Ellie added that hers was bigger and older, and she’d bought him after he had already won a few races, so he was more expensive.

After asking us if we had sponsors for turtle racing (“No, we don’t because we’re a smaller college team, but the big professional teams do have sponsors”), how far we raced (“Only about 10 yards, no one wants to wait and watch these guys go too far”), and, my personal favorite, how we trained our turtles.

Ellie replied that we use carrots to train them for racing, fasting them the day before a race so that their hunger motivates them. “Only for a day, though,” she said. “Nothing too extreme.”

By the end of our conversation, he was fully convinced that our hat cans contained racing turtles, wished us good luck, and told us that he couldn’t wait to tell his kids about them.

On our last flight, one man asked me all about the turtle-racing circuit. “It’s an up-and-coming sport,” I said. “Do you use snapping turtles?” Somehow, despite being awake since 3AM that morning (or perhaps because of it), I immediately turned to my teammate across the aisle and said, “Well, mine’s not, but I think Courtney races a snapping turtle. They’re in a separate division, though.”

“Yeah, they have to wear muzzles when we race them,” Courtney said, further cementing our story. The woman seated in front of her shifted away from her, eyeing the hat can stowed beneath her seat warily. She slid her feet forward, away from it.

Although no one ever asked, my “racing turtle” is called Secreturtlat, a name I hope to be able to share with some unsuspecting non-equestrian on our homeward flight. Either way, flying with racing turtles is infinitely more entertaining than the boring western hats actually stowed in those plastic domed boxes.

Haley is the author of Horse Nation’s “Academic Equestrian” series, following her collegiate experience as she balances her studies with participation on the varsity equestrian team and time with her own horse. Catch up on past columns by clicking the #ACADEMIC EQUESTRIAN tag at the top of the page!