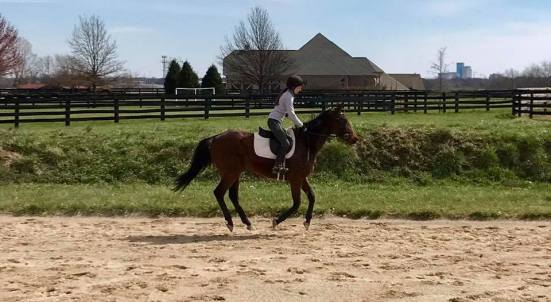 The ground has thawed, and what little snow the crazy Kentucky weather decided to produce is long gone. Green grass is peeking through, ready to make an appearance. We’re just days away from April, marking three months since Java has come off the track. Here we are 90 days in, and yet, we are still less than 10 rides under saddle.

This time last year I hadn’t even met Rebel yet. I was nervous, and I was worried about our six-month timeline and how we would fare against horses with months more time and training under their belt. So, when I picked up Java in early January, I had a plan. Getting my Makeover horse early this year meant so many things. It meant more time, a better bond, a higher level of training, more show miles before making the short trek to the horse park in October. I knew where I wanted to be and I knew exactly how to get there. My plan was foolproof.

But, in true equine fashion, nothing ever happens as expected. So here I am, nearly three months in with only a handful of rides under saddle. Whatever plan I thought I had in place has long since dissolved. But, surprisingly, I’m content.

Much to my surprise, Java’s lack of training up to this point doesn’t bother me. Unlike last year, I’m not uneasy or concerned about this journey, because now I know that’s exactly what this is — a journey.

It’s not about the destination, or the number on the score sheet hanging in the covered arena. It’s about every day from now until then. It’s about each sunrise we watch from her stall window as I groom, each trail ride, meandering aimlessly as we see new things, build muscle and talk about life. It’s about taking Java’s personality into account and listening to the unspoken ways she tells me what she needs and wants during this journey.

Java is a laid back, slow-paced, mellow girl who is happiest taking it easy. Her calm demeanor tells me exactly how she  wants to approach training. And after four years on the track and nearly 50 races, it’s my job to listen and oblige. She deserves the down time. Even though her muscles are no longer sore, she’s happy and sound, she deserves an easy transition with no real destination just yet.

So, we’ll sit back and watch, cheering on our friends and other competitors as they jump bigger fences, bring home the blues at shows and accomplish feat after amazing feat. We’ll be their biggest fans and talk of the day when we’ll go to shows and join in on the fun — when Java tells me she’s ready.

For now, we’ll trail ride and snuggle, lunge and build muscle, enjoying the views as we take the scenic route. We’ll breathe in the fresh air on the winding back roads of our journey, in no rush to get anywhere but exactly where we are.