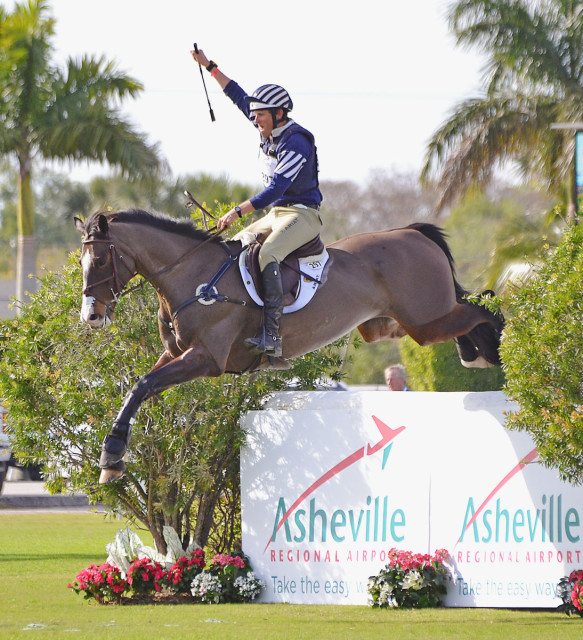 With $15,000 in prize money on the line, Boyd Martin and Trading Aces romped around Capt. Mark Phillips’ cross country course as the final pair to go to win the inaugural Wellington Eventing Showcase on 24.8. And he did it in style — hailing a cab as he jumped off the final fence on course at the Asheville Landing Strip, much to the delight of the big crowd that turned out to watch the afternoon’s festivities.

“I’m so proud to be here and to win it,” Boyd said. “I thought Mark Phillips built a beautiful course. He encouraged a glance off at the corners and runouts at the narrows, which we saw, but it wasn’t a dangerous course.”

It’s a bit of redemption after the way Oscar’s season ended last year at Galway Downs, and while Boyd is savoring the prize money — and popping open another bottle of champagne with owners Katie Walker and Gloria Callen as I type this — everyone is wondering what’s next for Oscar. Boyd spoke candidly about the horse’s future in the press conference: “This may or may not be the last time I ride Trading Aces,” Boyd said.

“We bought him a couple of years ago, and I had a group of 10 people that got behind him. We’ve had some massive highs and some massive lows. It’s a gut-wrenching environment when you’ve got to figure out if he’s an Olympic horse. If this sort of thing keeps going strong, you’d keep in in the barn and whip him out for this sort of thing.”

Michael Pollard and Cyrano picked up .8 time penalties to clinch second place on a score of 26.5. “I left the start box, and I thought I better not have a run out because I have to see (owner) Carl Bouckaert afterwards,” Michael said. “He was perfect. I didn’t really know him that well, and he couldn’t have gone a whole lot better — certainly for my second event out with him and five jump schools total.” 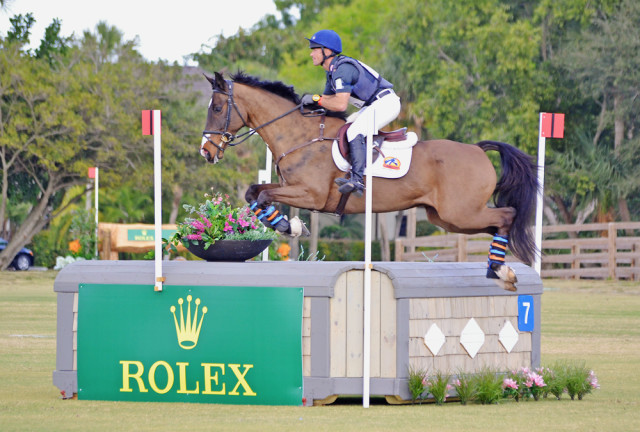 Laine Ashker and Anthony Patch jumped clear and inside the time to finish in third on 29.1, and she said the atmosphere — with flags flapping in the south Florida breeze — provided a great preparation in the lead up to the Rolex Kentucky CCI4*. Jennie Brannigan and Cambalda and Liz Halliday-Sharp and Fernhill By Night also jumped double clear to finish in fourth and fifth places on 29.2 and 30.2.

While Boyd’s cab hailing is now famous, Phillip Dutton actually did it first earlier in the day, grabbing the microphone from Sinead Halpin, who was here interviewing the riders, and asking everyone to thank the organizers for putting on such a fantastic event. Phillip jumped double clear with both Fernhill Fugitive and Seams Ready, and Julie Richards also jumped double clear with both Urlanmore Beauty and Beaulieu’s Cayenne.

While 13 of the 25 combinations jumped double clear, Capt. Mark Phillips’ cross country course did catch some pairs out, as the riders predicted in yesterday’s press conference. Marilyn Little missed one of the final fences on course and picked up a technical elimination with RF Scandalous, but the mare, who is still very green to this level, looked like a total pro up to that point.

Katie Ruppel was the only rider to retire on course when she pulled up Houdini after the ramp when she said he took a funny step. X-rays didn’t show any problems, but Katie said she will have him ultrasounded on Monday as a precaution. Clayton Fredericks was eliminated after two stops at the Rolex Splash, which came just after their glance off at the arrowhead following the ramp.

With it being so early in the season and Capt. Mark Phillips’ course being appropriately shorter as a result, no one expected cross country to seriously shake up the leaderboard — which it didn’t. The point was really to introduce the sport to an entirely new group of people and provide a world class feel for the spectators and owners, and it did that in spades. 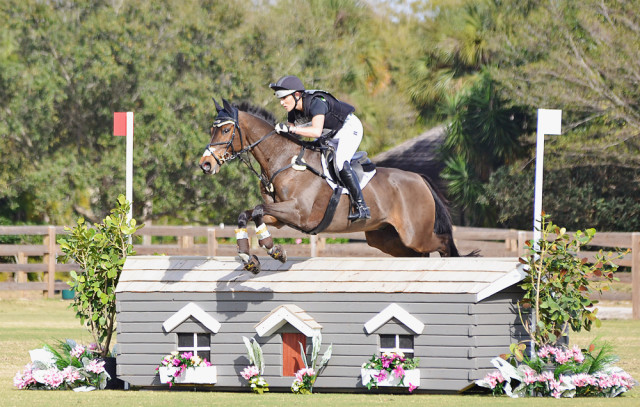 When only a handful of spectators turned out to watch dressage yesterday, we all hoped more would show up today to watch the eventers go cross country at Wellington for the very first time. And they came out of the woodwork, with hundreds and hundreds of people turning out to watch, with many of them saying it was the first time they’d ever seen cross country.

I chatted with a number of spectators during the afternoon, and many of them said seeing cross country made them want to try the sport for themselves. They gasped when the horses took flying leaps over big tables. They applauded and cheered when a rider came home clear inside the time. They oohed and ahhed as the horses went galloping across the derby field.

It’s a metaphorical turning of tables. When the eventers pulled into the Palm Beach International Equestrian Center earlier in the week, we were all wandering around wide eyed taking in the sights of this incredible facility. And that came full circle today when the jumper and dressage crowds got hooked on the thrill of cross country.

Let’s be clear: Should an event like this replace traditional eventing? Of course not — and no one here thinks it should. But that’s not the point of Mark Bellissimo and Equestrian Sport Production’s vision for this event. It’s meant to introduce eventing to a different crowd of people and attract potential new sponsors and owners so we can do things like finally bring prize money to the sport. If this showcase represents even a fraction of what an event like this can do for eventing, we all have a lot to be excited about for the future.

I have much more to bring you, including quotes from the press conference, a full photo gallery and more on the big picture of what the Wellington Eventing Showcase means for the future of the sport here in the U.S. Stay tuned to #WellyEventing. And many thanks to Katie Walker for this great video of Boyd’s winning moment: 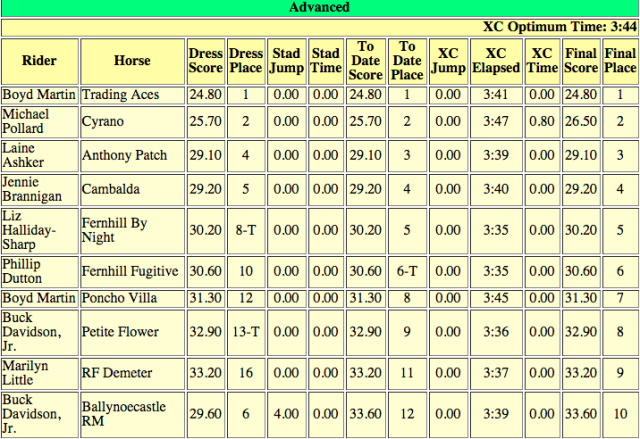