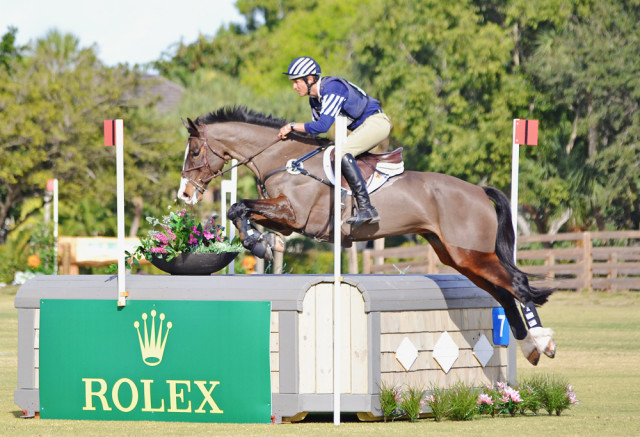 Boyd Martin’s career has taken him to top events all over the world, but he said the inaugural $50,000 Wellington Eventing Showcase is the best competition he’s ever been to. That’s a sentiment everyone who attended the showcase is likely feeling after seeing what the organizers achieved this weekend.

“The organizers have put on something I’ve never experienced before. I was just so proud to be here,” Boyd said. “The people that own the horses felt like kings in this marquee. The course was first class. The arena was arguably one of the best rings I’ve ever ridden in. It was just an unbelivable competition.”

Marilyn Little said in yesterday’s press conference that she knew this organizing team, which includes Mark Bellissimo, Jim Wolf, Michael Stone and Equestrian Sport Production, “could create magic,” and she absolutely hit the nail on the head, especially when you consider the palpable excitement this weekend has generated — not just from the riders, but people who witnessed the sport for the first time today.

Mark said he’s had the vision of bringing eventing to Wellington for the past few years, and after pulling off what can only be hailed as a raging success, he said in this afternoon’s press conference that this is just the tip of the iceberg.

“We are so fired up to take this sport to the next level and work with other organizers and work with the different organizations to make something interesting here,” Mark said. “I’m very excited about this sport and this group of people and honored to see this great group of athletes perform at such a high level in an experimental venue.”

And Mark is putting his money where his mouth is. With this weekend’s $50,000 purse already making it the second richest event in America, Mark said he’s going to double it to $100,000 next year, as well as increase the charitable giving that goes along with it.

As a way of giving back, the owners of the top three finishing horses each received $7,500, $5,000 and $2,500, respectively, to donate to the charity of their choice. Katie Walker and Gloria Callen, the two members of the Trading Aces Syndicate in attendance this weekend, elected to give their $7,500 to Millbrook Horse Trials and Plantation Field Equestrian Events.

Carl Bouckaert, who rode Cyrano on the Belgian eventing team at the 2012 London Olympics and owns the horse, will donate his $5,000 to the Thoroughbred Retirement Foundation, which works to re-home off-track Thoroughbreds and provides sanctuary for horses not suitable for second careers.

Laine Ashker, who owns Anthony Patch, said since all her success has come from off-track Thoroughbreds, she will donate her $2,500 to the Retired Racehorse Project. Mark said this committment to philanthropy will become a tradition.

Indeed, the Wellington Eventing Showcase is taking things to the next level, and with change often comes skepticism, with the event facing questions on whether a glitzy competition with lots of prize money and a 2,000 meter cross country course built at this level have a place in a sport that so passionately believes in its roots.

Boyd agrees: “I think this style of eventing is great for the owners, spectators and sponsors, but the Olympics should be grueling, and gladiators should win. I’m all behind this thing, but I think it’s the building blocks of what could be.”

Capt. Mark Phillips, whose course was praised as appropriate for this point in the season when horses are very much still legging up, said he also believes there’s a place for this type of showcase in the sport.

“Nobody wants to change the traditional sport as we have it today, but more of these types of competitions meshed with the sport is a great way forward for the horses, the riders and the owners,” he said.

And bringing new owners and new support into the sport remains a big part of Mark Bellissimo’s vision. After just two days of having eventing in Wellington, Mark said he’s already had multiple people who own show jumping horses that compete here at the Palm Beach International Equestrian Center approach him about owning eventing horses, as well as companies wanting to get involved with sponsorship.

That’s what it ultimately comes down to. We know our sport is the best one in the world. Now it’s time to show that to the people who can help secure its future.

Michael Pollard made a great point yesterday that having more events like this could start attracting European eventers here so we can bolster our level of competition in the U.S., as well as avoid always needing to travel to Europe to compete against the best in the world. Boyd Martin took that one step further and issued the following challenge:

“I want to give a shout out to Michael Jung, Andrew Nicholson, Jock Paget, Chris Burton, William Fox-Pitt and whoever else wants to come here next January. Come test yourself, boys. Come get it.”

And this is only the beginning. Mark Bellissimmo’s new Tryon facility is already slated to host a three-star in August, and he is making a considerable investment in the Colorado Horse Park to bolster eventing out west.

“I’d love to be able to host a second four-star in this country in Tryon,” Mark said. “It’s a goal of mine. We will do whatever it takes and invest whatever we can do to make that happen.”

Eventing is moving on up, ya’ll, and we’re thrilled to be along for the ride.