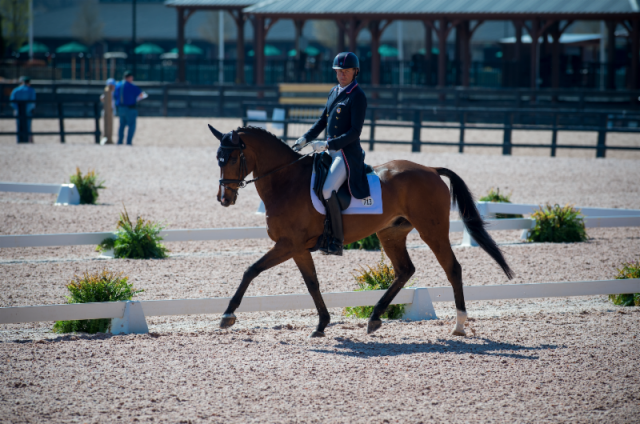 Boyd Martin’s last excursion to Tryon International Equestrian Center for the 2018 World Equestrian Games was a little bit of a bummer, but now he’s back and ready to make things right with a certain cross country obstacle: “There’s a boat — I’m going to be riding hard to that one, and I’m going to be clucking and flapping my elbows about five strides out of that one … you watch!”

If I was a boat, I sure wouldn’t want to meet that guy in a dark alley. On Thursday Boyd and Long Island T took command of the Advanced dressage division at The Fork at TIEC, presented by Lucky Clays Farm. The pair scored a 24.5 in the big atmosphere of Tryon Stadium to lead the 13-horse field.

“He went like a dream!” Boyd said of the 2006 Oldenburg/Thoroughbred gelding (Ludwig Von Bayern x Heraldik XX) owned by The Long Island T Syndicate. “He got in there and did a fantastic test. The event organizers were great at this event to let us school in the rings for both FEI and the horse trials, which promotes great tests.”

“He’s a pretty seasoned horse in the dressage now — it’s his second year at this level, so he’s starting to become very-well seasoned in all the movements. He’s great fun to ride on the flat because he’s got that natural extension the judges love.”

Looking forward to the rest of the Advanced competition, which features show jumping on Saturday and cross country on Sunday, Boyd said, “My strategy is to jump really well and then ride really well in the cross country. I think it’s a brilliant track and I couldn’t imagine a better place to prepare for a 5* event than this [TIEC]. It’s got magnificent stadiums, beautiful rings and then obviously a world championship cross country course. The horses should be well-prepared come Kentucky.”

All boat threats aside, Boyd has only sparkling comments for The Fork at TIEC and its venue. “To me, it’s just one of those brilliant events to come to with the restaurants and shops here and staying in the cabins on-site. Obviously, it’s just a world-class facility and great exposure for the horses. I think it’s going to help produce top performances in the future as well,” he said. 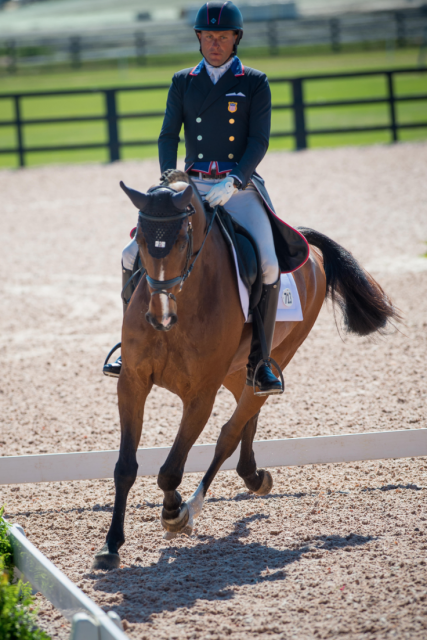 In second place after dressage is Lynn Symansky and Under Suspection on a score of 27.7. Lynn and “Pippy,” a 15-year-old Holsteiner mare (Contender x Naomagic I, by Exorbitant xx) owned by Mary Ann Ghadban, come in as defending champions, having won one of two Advanced divisions here at The Fork in 2018. Their test yesterday fell a couple points shy of the 25.7 they posted last year.

“Our test was alright,” Lynn said. “She [Under Suspection] left a lot of points on the board, but I’m preparing for Kentucky, so I used the test to play around with a few things. I’ve ridden the horse for a year now, so I know her a bit better. She was my backup horse for WEG last year.”

Like many of the combinations here, Kentucky is also the next stop on their calendar.

She continued, “She’s such a lovely horse — to get that score when it wasn’t the best you’ve ever done is great. I’m excited to go out on Saturday and ride her around the track I got to ride in September. She knows her job and she’s such a lovely mare. So I’ll use this as a final prep for Kentucky.

“I think she’s just a reliable horse all around. She can get a little hot in the ring — she’s a relaxed competitor, but she’s a fighter. She is such a beast cross country. She really would love to just go cross country and gallop forever.”

Swiss Olympian and two-time WEG contender Felix Vogg, who now resides in the U.S., sits third aboard Archie Rocks with a score of 29.50. Felix purchased the 12-year-old Thoroughbred gelding (Le Monde x Unbridled Diva, by Unbridled Jet) from Maya Studenmund early this year, and he says their partnership is still developing but progressing well.

“The test was pretty OK,” Felix said. “I think he is not the most talented one in dressage, but he wants to do the test correctly and tries. Today, he was much more calm and focused.

“He like cross country and jumping. Cross country is nothing for him — he’s an old racehorse, so he’s used to it, but dressage is a new thing for him. I’ve only had him since January.”

Looking ahead to cross country, Felix said, “I make a plan when I get out of the start box and jump the first few jumps based on how he feels. I like that the course will have parts of the WEG course, and it is interesting to ride it once more, and maybe try to do it better than last time!”

For the CCI3*-S division, Doug Payne and Starr Witness advanced to first with a dressage score of 27.6, while Will Faudree and Caeleste sit in second on a 29.6. Liz Halliday-Sharp and Flash Cooley are in third on a score of 30.8. Meanwhile Hannah Sue Burnett and Carsonstown lead the CCI2*-S dressage on a score of 32.0.

The Fork at TIEC continues with CCI4*-S, Modified, Novice, Training, and Beginner Novice dressage phases, followed by show jumping and cross country for all phases Saturday and Sunday. We’ll be back later today with much more! 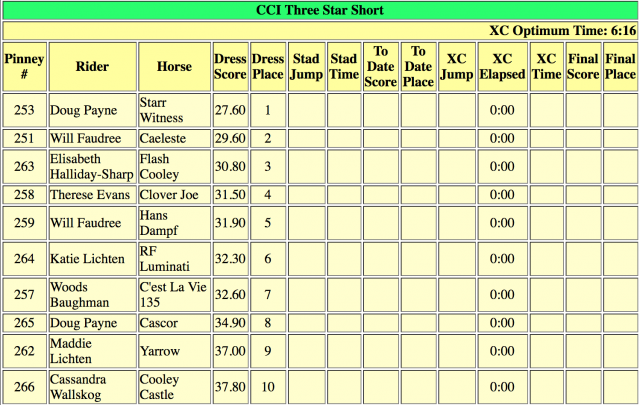 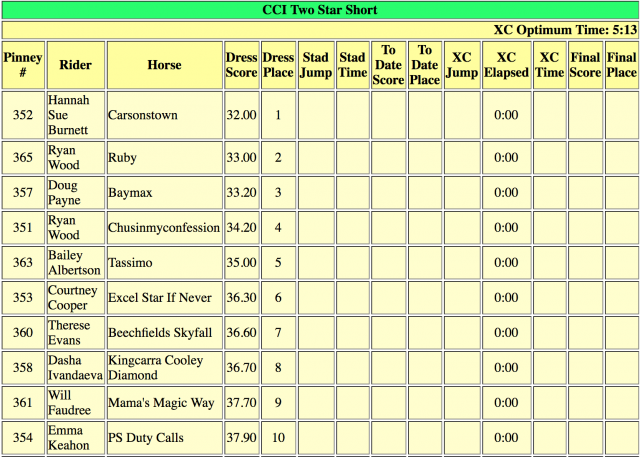 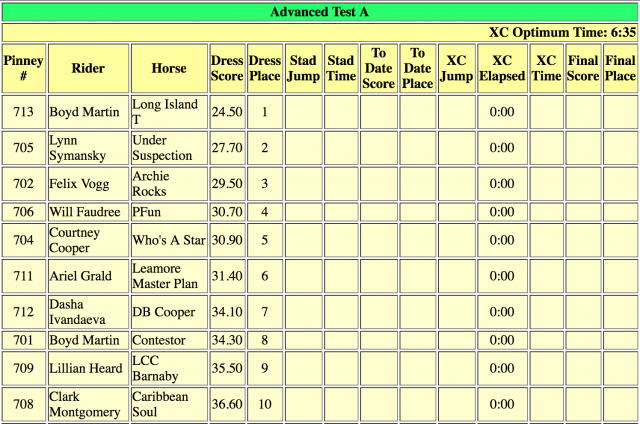