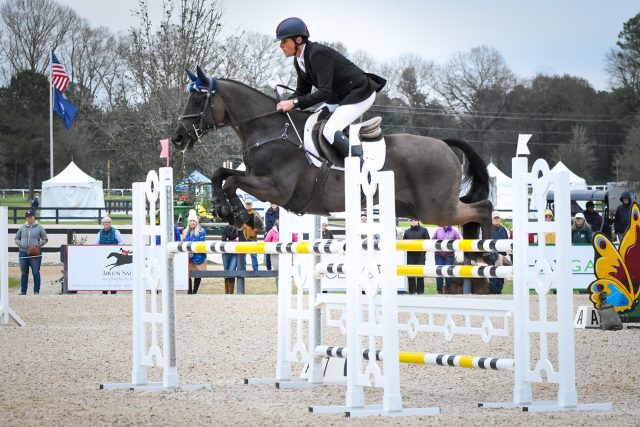 It was a craps game this afternoon at the $50,000 LiftMaster Grand-Prix Eventing at Bruce’s Field. Michel Vaillancourt’s course carefully collected the leaderboard, shook it up and scattered the results like a dice role, shuffling the deck to reveal Boyd Martin and Tsetserleg as the new leaders.

Our Pan American double gold medalists Boyd and “Thomas,” Christine Turner’s 12-year-old Trakehner gelding (Windfall x Thabana, by Buddenbrock), jumped double clear — to remain on a score of 30.7 — and all seems right with the world.

Welcome back, you two. To be fair, their two-phase result was hard-earned as they were one of only five pairs to jump faultlessly. “The dressage was like that a bit too,” Boyd said of the course’s difficulty. “A lot of electricity in the ring, big jumps, tough technical course with lots of long strides then short strides… it was a real mega course. I was thrilled to leave them up.”

Spoiler alert: You can expect another leaderboard change tomorrow, as Boyd’s already planned to withdraw both Thomas and Long Island T, who is in 13th place.

“Thomas ran in the Intermediate just six days ago at Pine Top in Georgia, so he’s had a cross country ride not long ago, and I’m really trying to set him up well for Kentucky, and it would be an act of madness to sprint him around the cross country here six days after he’s had a run. The other bloke, he’s had sore heels, and he missed a bit of work this week. Two poles down — we’re out of it so I’ll just run him next week,” he said. 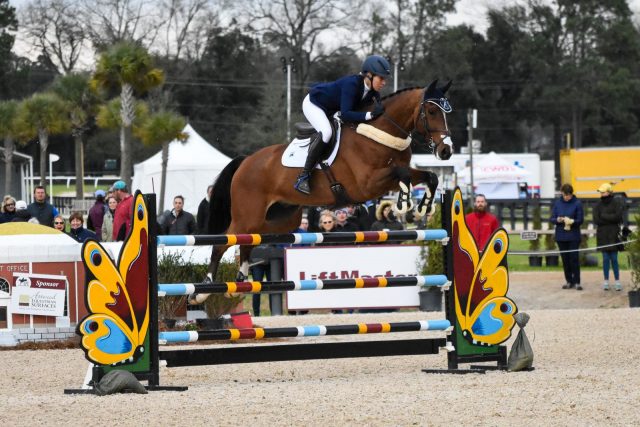 Liz was tied with Boyd after dressage, but one second t0 many in the show jumping bumped her just behind the leaders on a score of 31.1 with the 12-year-old KWPN (Zapatero VDL x Zonne-Trend, by French Buffet xx) owned by Ocala Horse Properties and The Deniro Syndicate.

“I’m furious at myself for that,” she said of the 0.4 time penalties. “It’s been interesting this year because ever since Deniro did Burghley, he’s completely changed to jump. He’s really polite now, and he used to land and go, so I have this believe as to where I’m going to be. More than one time working this year I’ve ended up adding a stride in a combination, which I’ve never done in my life because the horse is so waiting for me that if I don’t move a bit when I land I’m like ‘Whoa!’

“It was one hundred percent my fault. The horse jumped great. It was a tough course to ride — it put pressure on you. So I’m owning the one second that’s one hundred percent Halliday-Sharp. We’ll keep working — I’d rather him be polite, and now I just have to learn to ride my polite horse. “

Liz describes herself as ‘competitive,’ and has assured us she’s gunning for a back-to-back win tomorrow as a prep for the Kentucky Three-Day Event.

“I’ll run him quick for the time. This is what we planned this year to do Wellington and this as runs for him instead of Pine Top because he’s really good on a big, galloping track, so it’s good for him to do these nippy tracks where you put the pressure on and turn him tight. It’s good practice for both of us,” she said. 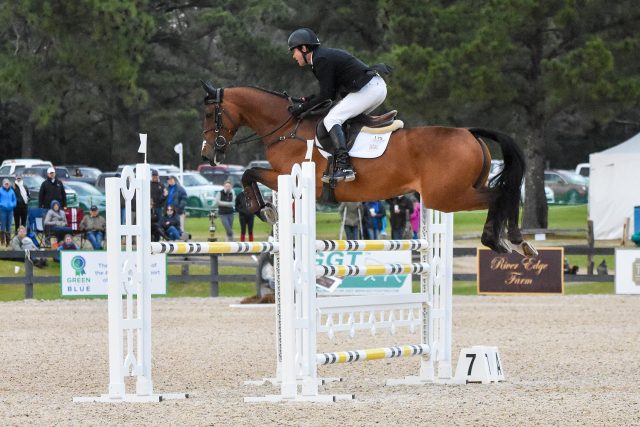 It was a good day in the office for Phillip Dutton who moved Z and Fernhill Singapore into third and fourth place, respectively. The Z Partnership’s 12-year-old Zangersheide (Asca X Bellabouche, by Babouche VH Gehucht Z) went double clear to remain on 32.6, and Fernhill Singapore, an 11-year-old KWPN (Sinapore x Riedellia, by Animo) owned by Ann Jones, Thomas Tierney and David Vos, added just 0.4 time penalties for a score of 33.1.

“It was a difficult show jumping track but the rails were spread evenly around so I think Michel got it about right. The show jumping standard in eventing, just like all the other phases, is getting stronger and stronger. I think everyone handled it pretty well,” he said. Phillip also confirmed that both his horses will compete tomorrow.

“I’ve targeted these two horses to do the Showcase in Wellington and then this Eventing Grand Prix, the idea being that it’s good to practice your skills under pressure,” he explained. “It’s reasonably difficult doing the five star test in the dressage and then a bigger show jumping and the cross country shouldn’t be that taxing on the horses because it’s quite short.” 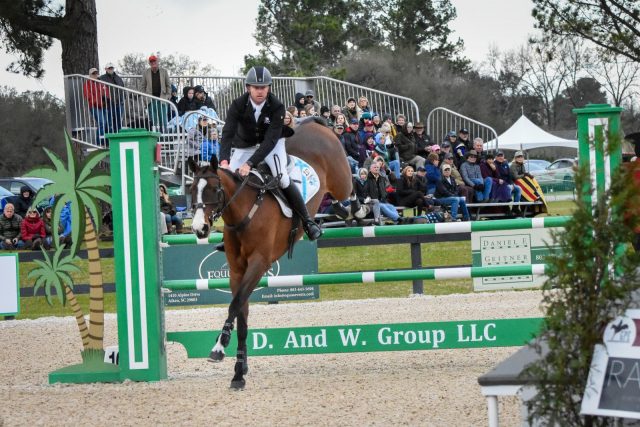 A double clear round boosted Will Faudree and Caeleste from 11th to fifth place. Jennifer Mosing & Sterling Silver Stables’ 13-year-old Holsteiner (Contender x Happygolucky, by Lucky Lionel), who began her career with Kitty King, stays on her dressage score of 33.6. 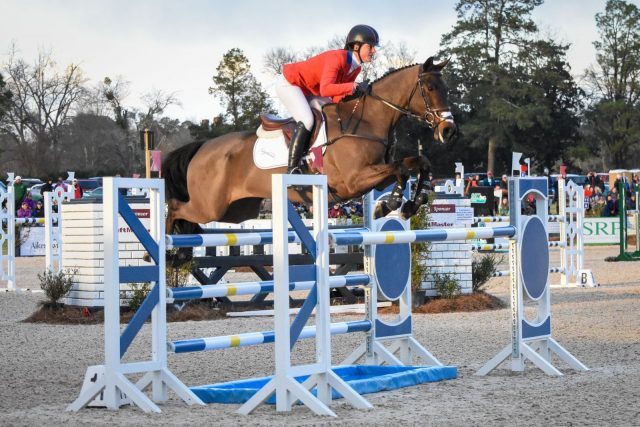 Dressage winners Lauren Nicholson (née Kieffer) and Veronica had one pole down in the second half of the course to drop into a tie for fifth with Faudree. 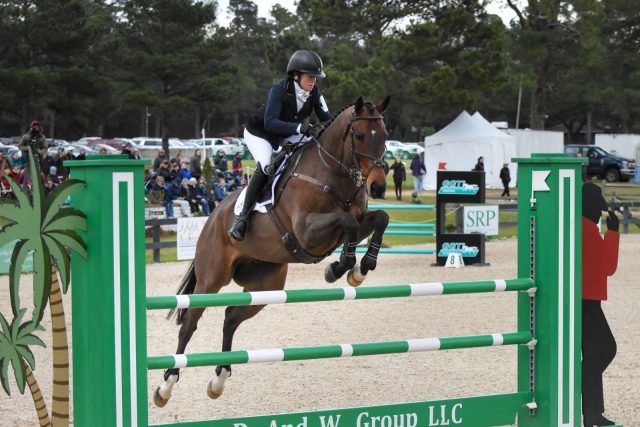 Erin Sylvester-Kanara and Paddy The Caddy. Photo by Shelby Allen.

Erin Sylvester-Kanara and Paddy The Caddy took over seventh place as one of the five double cleans on a score of 35.1. Mike Pendleton and Steadie Eddie are eighth. They jumped clear, but added 1.6 time penalties to sit on 35.2 points.

The cross country gets underway tomorrow at 2:30 p.m. It will all be streamed live, so tune in at this link to watch the action unfold.