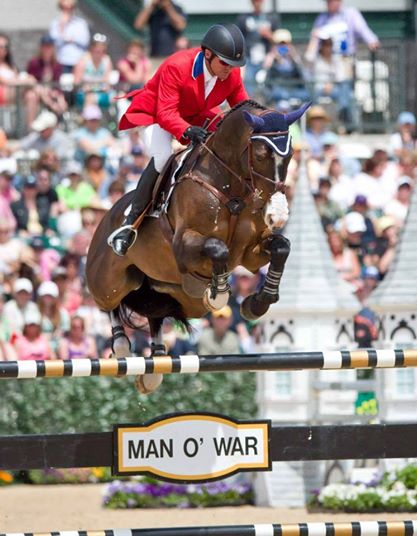 We’ve been speculating for the past few weeks that Phillip Dutton could ultimately be named to the World Equestrian Games team with Trading Aces, and Boyd Martin confirmed today that he and the syndicate owners have given their blessing should the selectors decide to go that route.

After his third-place finish at Luhmühlen with Shamwari 4, Boyd is all but a lock to be named to the WEG squad with the horse when the list is released later this week. Mighty Nice also put in a very good showing with Phillip for seventh place, which makes a strong case for the horse to be named to the squad as well.

But let’s not forget Phillip and Oscar’s very impressive eighth-place finish at Rolex, where Big Phil hit bang on the optimum time on cross country and had just one rail down in show jumping. The horse definitely showed he has what it takes to hold his own on the international stage, and it’s very unlikely he’ll be left off the list.

Either way, it’s a great show of sportsmanship that Boyd and the owners have left the door open for Trading Aces to serve as Phillip’s ride at WEG. Phillip has ridden at every Olympics and World Championships for the past 20 years, and his experience at Normandy would be invaluable as Team USA looks to get back on the podium.

Boyd has also been named to the last two U.S. championship teams, but he didn’t exactly leave much breathing room in making his bid for Normandy. Thanks to his good performance with Shamwari 4 in the final hour, we have a little more clarity as to how this year’s WEG team will likely shake out. Stay tuned for much more as we reveal our final picks for the WEG squad.