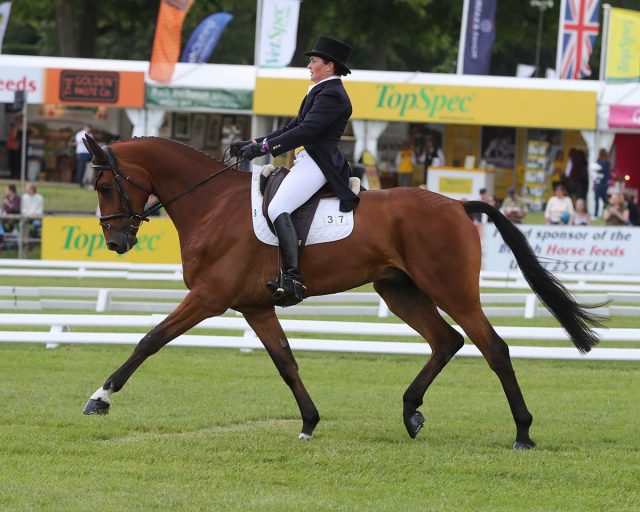 Selina Milnes and Iron IV take the lead after the first day of CCI4*-L dressage. Photo by First Class Images.

Amongst the household names of last year’s Blenheim field, there was one horse and rider combination who snuck into the upper echelons of the leaderboard and made everyone watching sit up and pay attention in the process. Selina Milnes and Iron IV didn’t just make the serious track look easy – they made it look enormously fun, too, and everyone, commentators, photographers, journalists, and fellow riders alike, got stuck into some good-spirited bickering about who might have the best chance of stealing the striking Irish gelding. They ultimately finished fourth in the CCI4*-L there, and today, they proved that their performance then was no fluke. Coming into the arena as one of the last competitors of the day, they posted a 29.2 to take over the lead from Sweden’s Jonna Britse.

“He’s still got so much more to give – he just sort of backs off me a bit in the arena,” says Selina, who finished 11th here last year in the CCI4*-S. “But in the way he moves, and his frame, he’s just a lovely type. He catches the eye, doesn’t he?”

William Rucker’s eleven-year-old gelding (Aquilino x Ushuaia) was sourced from Richard Sheane’s Cooley Farm. He made the step up to four-star in 2017, finishing 20th in Blenheim’s eight-and-nine year old CCI4*-S.

“I’ve taken it steady, really – he’s so rangy in his stride that I’ve had to, otherwise on cross-country he just gets bigger and bigger and bolder and bolder,” explains Selina. “But he’s lovely, he’s got everything you’d want. He’d definitely make a five-star horse.” 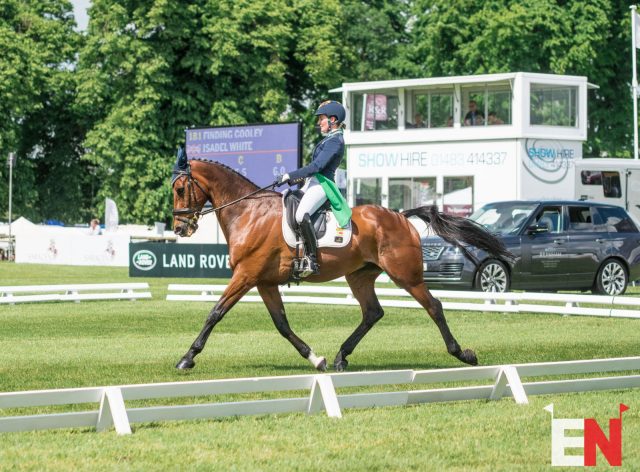 “I’m feeling a little bit emotional!” laughs a damp-eyed Camilla Kruger as she exits the ring with Biarritz II. It’s hard to blame her: the road she’s travelled with ‘Sam’, the Dutch Warmblood gelding with whom she made history at Rio, has been a winding one, replete with ups, downs, and everything in between.

As Zimbabwe’s first-ever Olympic competitors in the equestrian disciplines, Camilla and Sam’s clear cross-country round in Rio meant something extra-special. It wasn’t a chance to prove what they were made of; it was also a chance to help build the profile of the sport in Zimbabwe and beyond, where eventing is slowly beginning to gain in popularity. Camilla, for her part, is active in its development, heading back each winter to contribute her extensive experience and knowledge to the planning of the Azaluna CCI2*-L in Harare, which makes up part of the African ‘Nations Cup’ series.

Since Rio, though, it hasn’t all been plain sailing. Though undeniably talented, Sam has had a run of bad luck at the top level, retiring on course at both Luhmühlen in 2017 and Pau last year. He also had a surprise 20 in Blenheim’s CCI4*-L last year, but interspersed with the bad were the flashes of brilliance: the sterling performance here last year, which saw them finish just outside the top twenty, and the clear rounds over Chatsworth’s fiendishly tricky tracks.

“I’d always said that I didn’t think Sam was a Bramham horse, because he’s not very blood,” she says, recalling last year’s run. “But we needed to get a WEG qualification, and so we came here, and he loved it.” 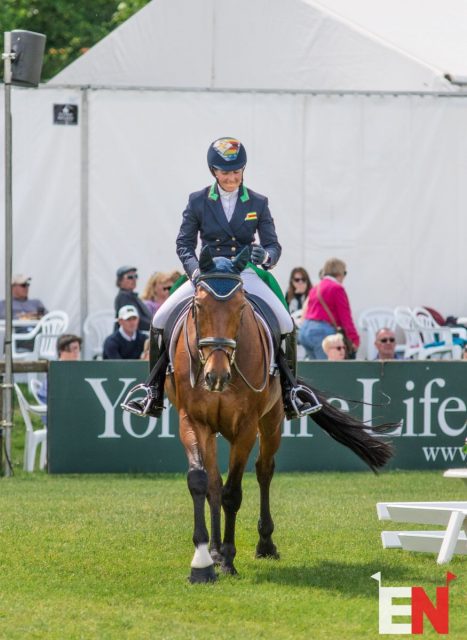 A moment of quiet celebration for Camilla Kruger and Biarritz II. Photo by Tilly Berendt.

They may only have one phase in the books thus far, but yesterday’s best-dressed winner rightfully considers the 29.4, for overnight second place, a very good start indeed.

“Getting into the 20s was the plan, but things don’t always go to plan. In fact,” says Camilla with a wry smile, “things never really go to plan! But I knew he could do it, and he did, so I’m really chuffed with him. There’s a serious dressage diva in this horse, but he’s just never believed in himself in there – it’s been a case of spending so much time doing the same thing and being really consistent with him. Once he starts to realise that it’s easy, he builds in confidence. At home he’s unbelievable, but he’s still learning how to deal with atmosphere; he’s got huge amounts of experience and he’s been around the world, but he did everything at quite a young age. He’s only thirteen this year – so there’s so much more left to come.” 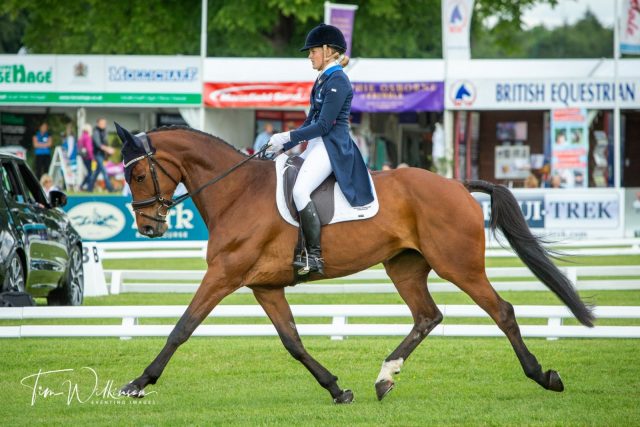 Young Swedish rider Jonna Britse is making the most of a first trip to England with her sole horse, the talented fourteen-year-old mare Quattrino. They’ve tackled Chatsworth and Houghton’s CCI4*-S classes so far, logging clear rounds at both, in preparation for what is a CCI4*-L debut for both horse and rider.

And what a start to make in a debut performance: the duo put a score of 29.9 on the board, holding the lead for much of the day and ultimately sitting in third place overnight. Jonna, who studied sports psychology at university, has clearly taken her learnings to heart – but for a small mistake, she would have delivered a personal best, too. 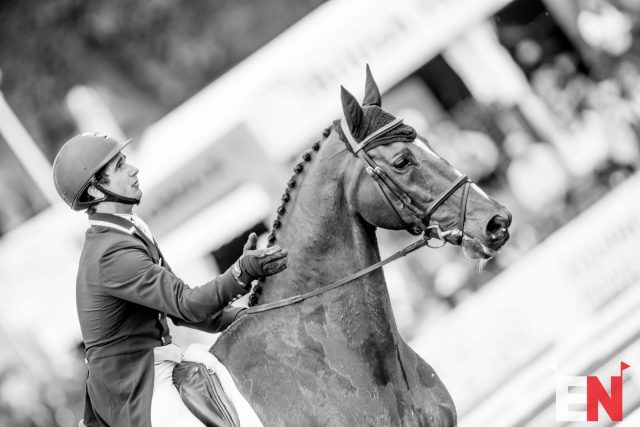 Coral Keen and Total Belief sit in overnight fourth place on a score of 30.6, closely followed by Wiltshire-based Kiwi James Avery and Ian and Heidi Woodhead and Tiny Clapham’s Mr Sneezy, fifth on 30.9. Formerly ridden by Holly Woodhead, Mr Sneezy joined James’ string in 2018 and since then, the eleven-year-old Irish Sport Horse has gone from strength to strength. Today, he overcame his first-phase weaknesses, plummeting his usual high-30s dressage mark to a creditable 30.9.

“I was really pleased with the horse; he’s been a bit fresh with me before, and today I could ride him,” says James. “There were a couple of little mistakes, but nothing major, which is a good start.”

For Mr Sneezy, this Bramham run is something of a litmus test: if it goes well, as it ought to, the team can start to seriously consider scheduling in a five-star debut for both horse and rider at Burghley. 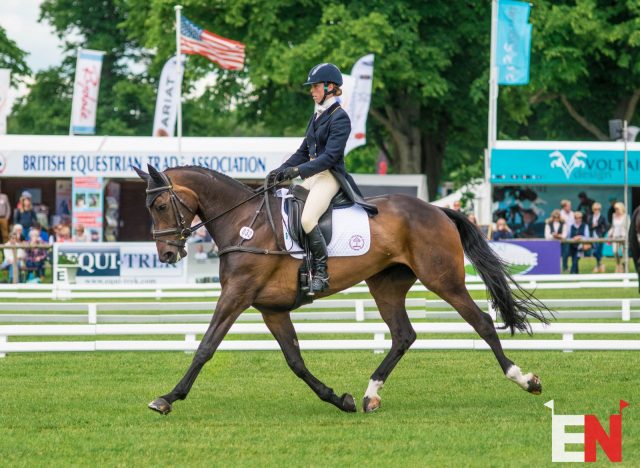 Emily Philp and Fallulah: consistent between the boards. Photo by Tilly Berendt.

Sixth place is held overnight by Ian Wills’ exciting young mare Fallulah who, with Emily Philp in the irons, has been building up a solid string of good form over the last year. In that time, the ten-year-old has run at five CCI4*-S competitions, jumping clear and quick across the country in all but one. Last month, she lodged a fifth-place finish in her Event Rider Masters debut at Chatsworth and today, in her first CCI4*-L, she put a 32.4 on the board to sit comfortably within the top ten overnight.

The top ten after the first day of dressage in Bramham’s Equi-Trek CCI4*-L.

Elsewhere on site, Richard Coney and Kananaskis lead the under-25 CCI4*-L. Fresh off the back of their senior squad debut at last month’s Houghton International, they’re obviously feeling full of confidence and ready to embrace all the big leagues have to offer. A strong CCI4*-S class got underway today too, with Nicola Wilson taking an early, unassailable lead with the impressive young horse JL Dublin. Together, they scored 25.1, giving them nearly a full penalty margin ahead of second-placed Ben Hobday and Shadow Man II, who posted a 26.

We caught up with Tamie Smith, who comes forward with her experienced partner Wembley III. Tamie and Wembley initially made the journey to the UK to contest Badminton this spring, but an ill-timed abscess led to their withdrawal at the first horse inspection. Undeterred, Tamie left Wembley in the safe hands of Rodney Powell and Alex Franklin and headed back to the States to keep the rest of her string on the go. Now, with the end goal of Burghley, she brings the great grey to Yorkshire for a short four-star run.

“It’s not a bad plan B to have, really,” she laughs. “My vet back home told me that this is what horses are here for: to torture us, to break our hearts, and then to give us an amazing amount of joy, too. He knows his job, so he doesn’t really need to practice it too much. It’s mostly his fitness and his flatwork – and Alex is fantastic on the flat, so we’re really lucky to have access to her. And I’m at home practicing, too, so it’s easy to come back and fit back into it like a hand in a glove.”

Although Tamie had considered a reroute to Luhmühlen, she knew that deep down, she wanted to pursue a competitive goal that would set her heart alight. Bramham, she explains, is the perfect track to help amp the gelding’s fitness back up, while giving him enough of a challenge to sink his teeth into. “There are some skinnies that are skinnier than he is, but luckily we practice a lot of that,” she says. “And it’s funny, people always say it’s hilly here, but until you get here … to me, these are mountains! It’s all about your perspective. But he’s a big galloping horse, and it’s a beautiful place to be. It’s a really fun step down from Badminton – but it wouldn’t be much of a step down!” 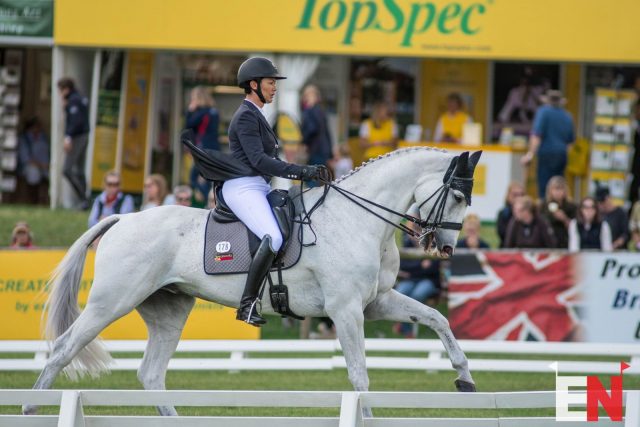 The pair sit in 14th place overnight on a score of 32 at the halfway point of dressage.

“The atmosphere was massive in there, but I was so pleased with him – he was really workmanlike,” says Tamie. “There are still some places we can work on things, but overall, he’s producing some really beautiful work.”

Tamie credits supergroom Monique Coston with making it possible for her to continue to chase the dream, despite a change in plans: “she’s so much more than just a groom; she does everything. She does all the fitness work, the day-to-day, all the gallops – she’s wonderful, irreplaceable!”

Dressage resumes tomorrow morning at 9.30 a.m. BST/4.30 a.m. EST. Stay tuned for a full breakdown of all tomorrow’s action, plus a look at the two tough Ian Stark-designed courses awaiting our competitors this weekend.

The top ten after the first day of dressage in the Land Rover CCI4*-S.