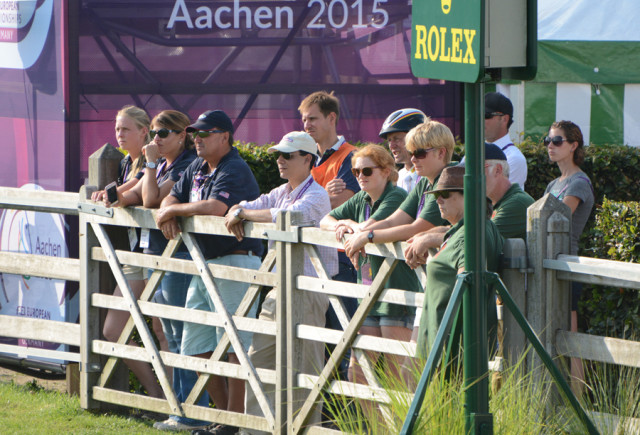 If you feel like you blinked and two-thirds of Aachen is suddenly over, you’re not alone. The competition always seems to fly by here in Germany at this hotly contested leg of the FEI Nations Cup, so let’s take a few minutes to break down the day, specifically in how things went for our North American pairs.

David O’Connor has kept Aachen high on his list of events to target as the High Performance program continues on in this re-building phase, and the U.S. has been able to send a team to this event for two of the past three years. Considering the U.S. hasn’t completed a team at any major competition at the three-star level or higher since 2012, the goal in returning to Aachen this year seems self explanatory.

The U.S. selectors sent a strong group of proven cross country horses and riders, and fifth place in the team standings is about where David said he expected to be sitting after dressage and show jumping considering the scores these specific combinations typically average at this level. The entire top 10 was sitting in the 30s after dressage with the U.S. well down the leaderboard, but we also didn’t bring a “30’s horse” to Aachen.

“These are a lot of Olympic teams here,” David said this afternoon. “You’re going to see a lot of these horses next year (at the 2016 Olympic Games in Rio de Janeiro), and I wouldn’t say that this is our strongest group in regards to which horses can hit those low dressage scores. It’s getting there, but it’s a step-by-step process.”

The good news is the U.S. does have a number of exciting younger horses currently coming up through the levels — especially at the two-star level — that are capable of hitting those low dressage scores and delivering consistency in the other two phases as well. The reality is a lot of those horses are only just now stepping up to the Advanced level and won’t be putting in a full three-star season until next year.

Looking at today’s results, Donner, Fernhill Cubalawn and Veronica all scored right about where David expected them to, he said. While we know Covert Rights is capable of hitting the low 40s with Colleen Rutledge, the horse has also had a less than ideal lead-up to Aachen considering he was still in England on Tuesday night. With the U.S. receiving very last minute notice that “CR” could be added to the team, he shipped to Germany overnight, arriving Wednesday in time for the first horse inspection.

“Colleen’s horse is a difficult one to jump, and he usually has two rails,” David said. “We put a different bit on him to see if that made a difference, and I think that’s the right way to go, but this horse is new to the program. It’s Colleen’s first team competition, and the preparation hasn’t been as great for her, so it’s understandable why we didn’t see the dressage score we know they can do. Now we know what to work on for Burghley.”

David has consistently preached developing a string and keeping young horses coming through the pipeline since he took over as U.S. coach, and the reality is we are poised to start reaping those rewards in the very near future. Once these current hotshot two-star horses start stepping up to the three-star level, we’re going to be able to hold our own in the type of low scoring scenarios we saw today at Aachen.

If our hotshot horses make it to events like Aachen and then don’t deliver on the world stage, then we’ll have a big problem on our hands. But until then, the goal is to continue getting off our island, gaining overseas competition experience and completing teams with the current horses we have in our arsenal. With that in mind, David said he is happy at the end of today.

Tomorrow brings a whole new challenge in Rüdiger Schwarz’s cross country course. If you read my course preview on Tuesday, you saw that the course has been softened in several areas in comparison to how it looked the last time a full U.S. team competed here in 2013, but that doesn’t mean David is expecting it to be easy.

“I think it’s a little softer than when we have been here before, except for the coffin,” David said. “The coffin is strong; it’s a four-star fence. It might actually be a little surprising for the horses because the course is softer up until then. The angle (on the tractors) is as strong as you’ll see anywhere in the world, and I think those will cause trouble. The rest of it I think is quite nice.”

As for what the riders are thinking on the eve of cross country at an event that Paul Tapner hailed a “CIC4*” on last week’s episode of the Eventing Radio Show, I caught up with all seven of our North American riders today to get their comments on the course, as well as some other general thoughts on Aachen.

Phillip Dutton: “It’s a good galloping cross country course with a couple of pretty difficult lines. I’m glad I came to compete here; it’s a very good competition. Part of the idea in coming to this event is that it’s a mini world championships because everyone is here. All credit to everyone else, it just means we need to get better.”

Rebecca Howard: “There are certainly a few tough questions. By all reports it looks like they’ve softened it from previous years. Based on the videos I’ve watched, I was expecting it to look different at the waters. It’ll be about who can get closest to the time, and there’s plenty to do as you’re trying to do that.”

Holly Jacks-Smither: “It’s the biggest course I’ve ever jumped around. Once (More Inspiration) gets rolling, he’s going to be quite good. It’s a twisty, turny course, and he’s fast and he turns well. I think he’s the only horse I’d want to be sitting on.”

Lauren Kieffer: “The course is tough enough, and I think the coffin is going to be really influential. Those angles are severe. You’re also coming off a long gallop with no set-up fence. Once you can survive those, you still have to get through the tiny toothbrush on the other side of the keyhole.”

Kathryn Robinson: “The course looks really nice, and I’m really happy with it. It’s fair questions and a fair test. You cross your tracks a couple of times, so you just have to keep focused on where you’re going.”

Colleen Rutledge: “I didn’t have the test I wanted or expected today, but the course looks good. I’m excited for the course.”

Lynn Symansky: “The angled hedges in the end are my biggest worry. It’s just hard to find that line at a severe angle, and they are quite upright. The course gets you galloping, and I don’t think there is anywhere you can spare a second. I plan to go out with pace, but I have to keep Burghley in mind and not be silly about what I do out there.”

Cross country streams live on ClipMyHorse.tv starting at 2 p.m. local time (8 a.m. EST) tomorrow, and we’ll also be running live updates here on EN. Click here to catch up on all of EN’s coverage of Aachen so far, and be sure to read the end-of-day show jumping report here. Ingrid Klimke and FRH Escada JS currently lead on 32.1, and Germany leads the team competition on 118.1.