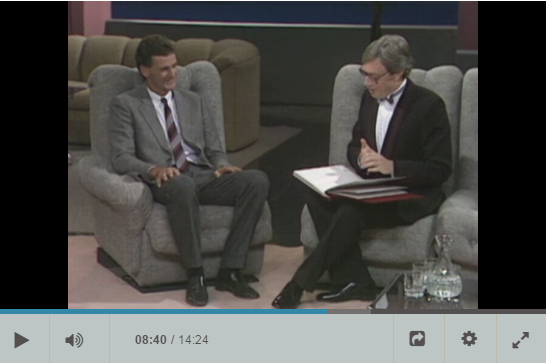 This Is Your Life is a television show dedicated to recognizing the lives of its chosen guests. Hosted by Bob Parker from 1984-1996, the show aired in both the United States and New Zealand. To date, 39 New Zealanders have been recognized on the show, which surprises the guests with a “big red book” documenting their lives and accomplishments.

In this episode from 1984, Mark Todd is the guest of honor on This Is Your Life, fresh off of his gold medal finish at the Los Angeles Olympics. Mark was the first ever New Zealand rider to win a gold medal for equestrian sport, and also the first to win gold for the Kiwis during the summer games that year.

“It’s something that most New Zealanders won’t forget for a very, very long time,” Bob remarked before he showed a highlight reel of Mark accepting his gold medal with Charisma.

You’ll be able to see guest appearances from 1984 bronze medalist Virginia Holgate as well as Capt. Mark Phillips and Toddy’s parents. who all share their fond memories of Mark as he made his way to the podium in California. Can we say blast from the past?