Though we all dearly miss Britain’s stately home venues, most of which have cancelled their fixtures for the second year running due to the ongoing pandemic, there’s something special and exciting – a sort of one-time-only deal – about the replacement competitions that have been put on to host their classes. This week, Devon’s Bicton International plays host to Bramham’s CCI4*-L, CCI4*-L for under 25s, and CCI4*-S classes, and already, organiser Helen West‘s extraordinary efforts are felt, with atmospheric dressage arenas and meaty courses yet to come.

Today marked the first day of dressage for all three sections, with heavy-hitting combinations coming forward to battle for eventual glory. Chief among those sections is the CCI4*-L class – the first in Britain this year. Judged by Christian Landolt, Annabel Scrimgeour, and Tim Downes, this class will see more than 80 horse and rider combinations fight it out over the next few days – and this phase is already set to be hugely competitive. 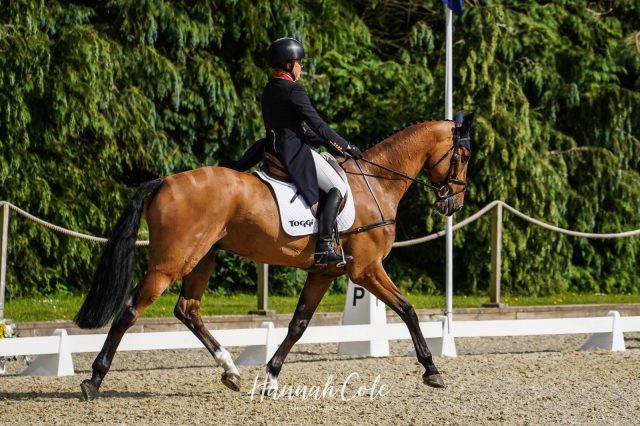 There were no freebie marks to be had in this section today, with just three horses earning sub-30 marks. Though Laura Collett held the lead for much of the class with 12-year-old Dacapo, who posted a 29.7 after scoring particularly well for his collected canter, it was to be Pippa Funnell and Billy Walk On who would lead at the end of the day. They squeaked in just ahead of Laura and Dacapo on their score of 29.4, giving the 12-year-old British-bred gelding, owned by Barbara and Nicholas Walkinshaw, an excellent early start on his mission to earn a fourth consecutive top-ten finish at four-star.

“It wasn’t his absolute best, but it was definitely a ‘clear round’,” said Pippa of the pleasing test that scored consistently, though not extravagantly, throughout. “He finds the dressage phase difficult and is quite a shy horse, so I am very pleased with him.” 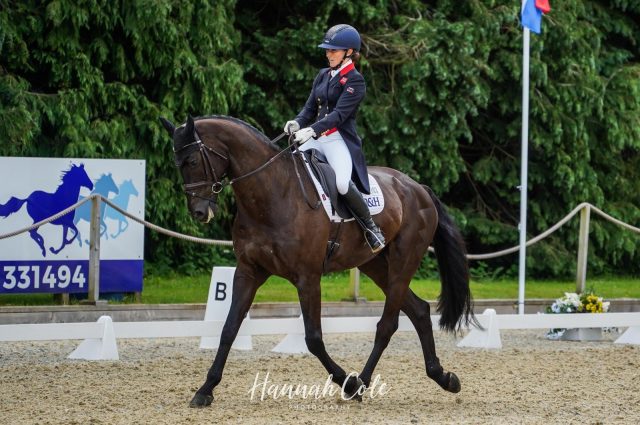 Laura Collett and Dacapo post an early lead and are downgraded to second at the eleventh hour. Photo by Hannah Cole Photography.

Third place is held by 2019 Badminton winners Piggy March and Vanir Kamira, who had originally been entered to run at next week’s Luhmühlen CCI5* but were forced to reroute as a result of the German travel ban. Their solid, mistake-free test earned a 29.9, while Sarah Bullimore and her homebred Corouet, who have been named as reserves on the British Olympic longlist, sit fourth on 30.2. Fellow reserves Ben Hobday and Shadow Man II, who made a late decision to run here instead of Luhmühlen after heading to Ireland’s Millstreet Horse Trials, round out the top five on 30.8. 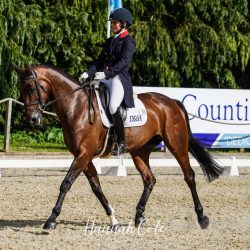 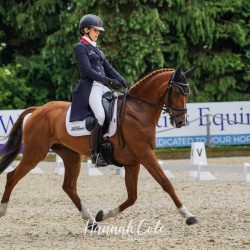 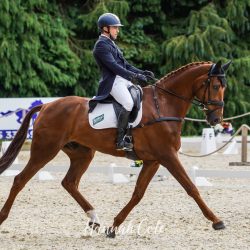 The top ten after the first day of dressage in Bicton’s CCI4*-L.

Though the CCI4*-L is arguably the feature class at Bicton, the CCI4*-S may well be the most closely watched – and that’s because it’s being used as the final selection trial for the British team heading to Tokyo this summer. With the exception of the two reserve-listed horses currently hanging out in the top five of the CCI4*-L, the named horses and riders are being pitted against one another in the midst of this hotly-contested class – and the calibre of their performances shows through when looking at day one’s top ten. 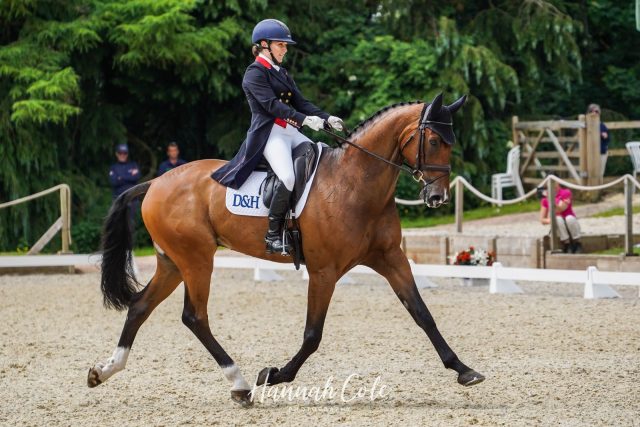 Laura Collett and London 52 lead the way once again in the first phase. Photo by Hannah Cole Photography.

Laura Collett once again finds herself sitting in the top spot with the indefatigable London 52, her 2020 Pau CCI5* winner who has long since grown past his up-and-down greener years to become one of the sport’s most consistent performers. The pair always shine in this phase, and though they made a rare mistake in their test, breaking to canter in the trot half-passes, they remained cool and calm in the considerable atmosphere to eke every mark they could out of the rest of the test, ultimately posting a 21 and leading the way on the strength of their collective marks, which earned them 9s across the board for harmony.

“That was entirely rider error, but otherwise I am really pleased,” says Laura, who had been trending in the teens before the blip in their otherwise sparkling test. 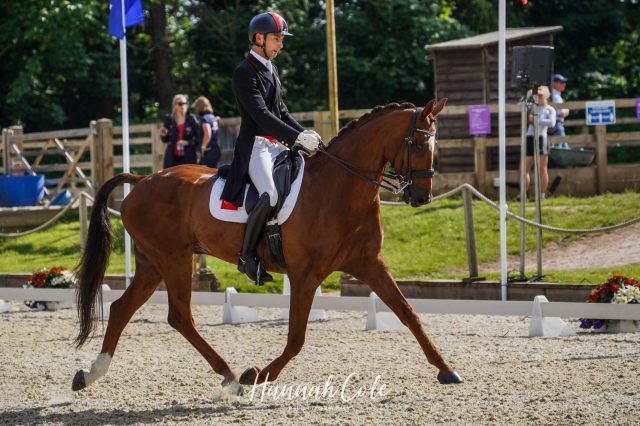 Their closest competition – and boy, was it close – comes from China’s Alex Hua Tian and his Rio Olympics mount Don Geniro, who put a 21.6 on the board with an expressive, fluid test that just lost a tiny foothold on the running average in the first flying change. 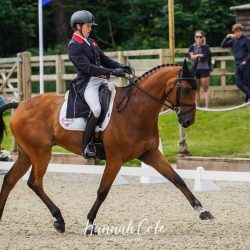 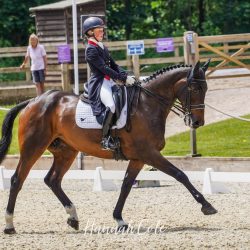 Ros Canter and Allstar B. Photo by Hannah Cole Photography. 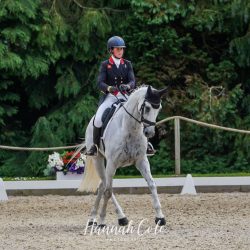 Both Tom McEwen and his 2019 Pau winner Toledo de Kerser and World Champions Ros Canter and Allstar B showed their consistency and experience in the ring – and made great strides toward earning their places on the Tokyo squad – when they each posted a 23 to tie for third with mistake-free tests. Just behind them, Piggy March and Brookfield Inocent and Kitty King and Vendredi Biats – also on the Tokyo longlist – are tied for provisional fifth on 23.1, while Oliver Townend and his reserve-listed two-time Kentucky winner Cooley Master Class are seventh on 24. Further down the leaderboard, Nicola Wilson and Bulana (26.3) and Pippa Funnell and Majas Hope (27.6; a significant personal best for this ordinarily mid-30s horse) each impressed the judges and gathered selectors but sit just outside the top ten.

The CCI4*-L for under-25s is one of the most coveted age classes in the world, and competition here tends to be fierce – but it would be fair to name 2021’s field as the best this class has ever seen. Such is the strength in depth of Britain’s young professionals that even the withdrawal of 2019 winner Cathal Daniels, who is travelling instead to Luhmühlen, and fellow Irish rider and top contender Susie Berry hasn’t thinned the quality of the field at all. 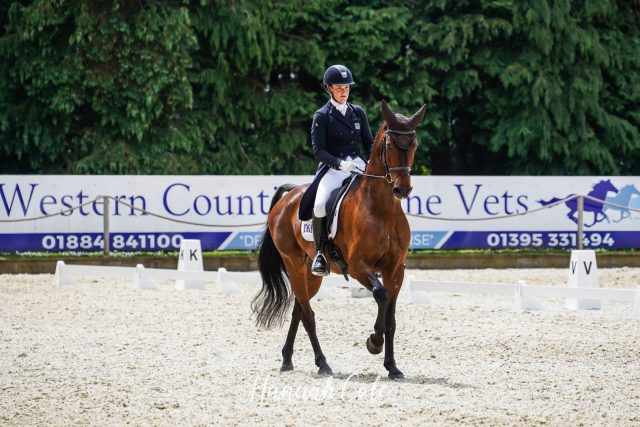 Bubby Upton takes an early lead in this class, posting the only sub-30 score aboard Cannavaro, with whom she recently finished fifth in the CCI4*-S at Aston le Walls. Her mark of 28.3 was only marred by a mistake in the second flying change, though the overall presentation of the test and its fluent consistency gave her the edge against some serious competitors. Sitting behind her in second on a 30.6 is France’s Barbara Sayous, daughter of Pau organiser Pascal, who made the long journey to England with her British-bred Opposition Filmstar. 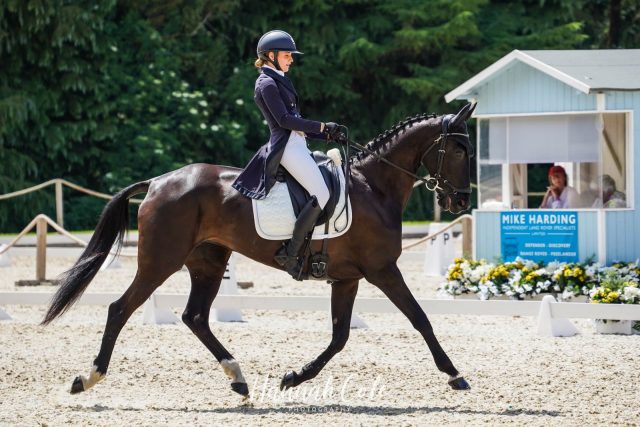 Ailsa Wates and the striking grey Woodlands Persuasion sit third on 30.8, while Katie Bleloch and Goldlook slotted into fourth on 31.6. Just behind them, reigning British under-25 champion Yasmin Ingham rounds out the top five on 31.8 with Rehy DJ, the second of her three rides in this class this week.

Tomorrow sees another action-packed day of dressage – stay tuned for further updates and a previous of the challenging track to come.