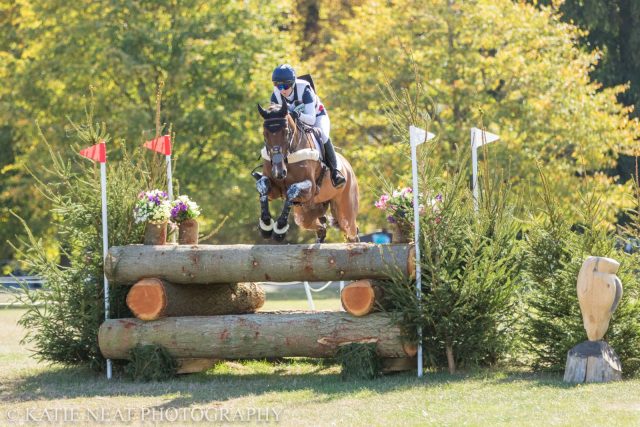 Britain’s major internationals will remain in situ for the 2020-2025 seasons. Photo by Katie Neat Photography.

On Wednesday afternoon, British Eventing announced the finalised list of international and championship events for the 2020-2025 seasons, with eight losses and six new additions to the calendar. This announcement follows a length Strategic Fixtures Review.

The review, which received 60 applications from eligible events, scored and evaluated each of the competitions on a number of objectives, before delivering a final percentage score to each. These objectives, according to a source within an organising team, were split into Sporting and Commercial criteria, with the former allocated a higher weight. Sporting criteria included event layout, event features, provision of permanent and temporary facilities, proposed timetables and team, financials, ground care plans, course development plans, soil type, and availability of all-weather surfaces, while the Commercial criteria focused on sponsorship, the presence of a designated marketing team, marketing and sponsorship plans, and current media output. Events were also scored for transport links and accessibility, and the security of the event — ie., whether the venue was likely to be put up for sale during its tenure. A stakeholder panel then created a provisional fixtures list before opening up the appeals process for any events that weren’t selected.

“The overriding objective was to provide a balanced fixtures calendar, giving the greatest opportunities for members to compete and reflecting the changing needs of the sport,” reads the organisation’s statement, posted on Facebook yesterday. “In addition, key considerations included sustainability, financial viability and geographical spread.”

Alongside the final list, British Eventing released a map-based view of the approved fixtures. This map also shows the portion of the country with the highest density of BE members. 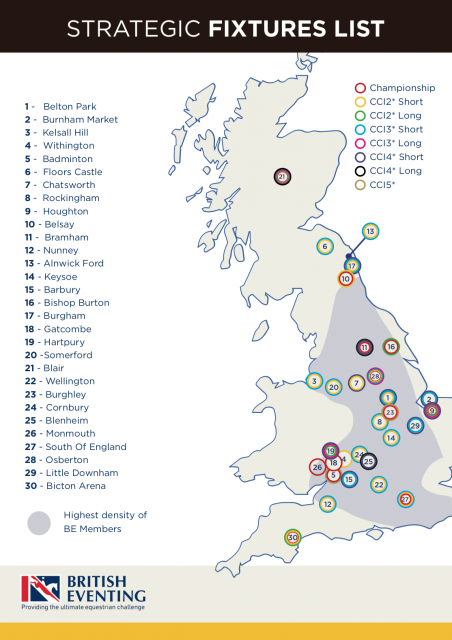 The 2020-2025 international and championship fixture map.

The loss of several popular fixtures — including most of those in the south-east and south-west of England — and a perceived lack of transparency about the review and appeals process has already proven controversial, with riders, organisers, and owners alike calling for a major change in the fixture allocation process.

“In order to respect the organisers and the sensitivity of the information provided, BE have kept the details of this process confidential,” the statement continues.

Chair of the BE board Fiona O’Hara commented, “I would like to thank all the organisers and their teams for taking the time to apply to host international and BE Championships fixtures. We were delighted to have received so many high-quality submissions.

“As a result of a final review, we identified a geographical gap in the South West, and have therefore taken the decision to rectify this for the benefit of our members by an adding one additional fixture [Bicton International] in this region. The fixtures calendar will remain under constant review in order to ensure that we continue to maximise the opportunities for our members to compete.

“We are really excited by the calendar and the introduction of new international and championships venues. This gives our members the unique opportunity to compete at a choice of familiar and much-loved venues along with some exciting new additions.”

Among the fixtures lost are Hambleden International, which previously ran classes from BE100 through Intermediate, alongside a CCI2*-S (formerly CIC1*). Hambleden fell victim to a fixtures clash in 2018 and wasn’t reinstated on the fixtures list this season. The south-east region has lost all bar one of its former internationals — Chilham Castle in Kent will host its final CCI2*-S this July, and Brightling Park will no longer run a CCI2*-S or CCI3*-S after June. South of England International in  September will continue to host CCI2*-S and CCI3*-S classes, including sections for ponies and juniors.

The popular Bicton International in Devon will no longer run its CCI2*-S and CCI3*-S in April, but will host a CCI2*-S and CCI2*-L to run concurrently with its BE100 three-day in October.

September’s Gatcombe International — not to be confused with August’s Festival of British Eventing, held at the same venue — will no longer run its CCI2*-S and CCI3*-S class after the retirement of its primary organiser and the loss of its main sponsor. Norfolk’s Great Witchingham International also loses a CCI2*-S in late June. 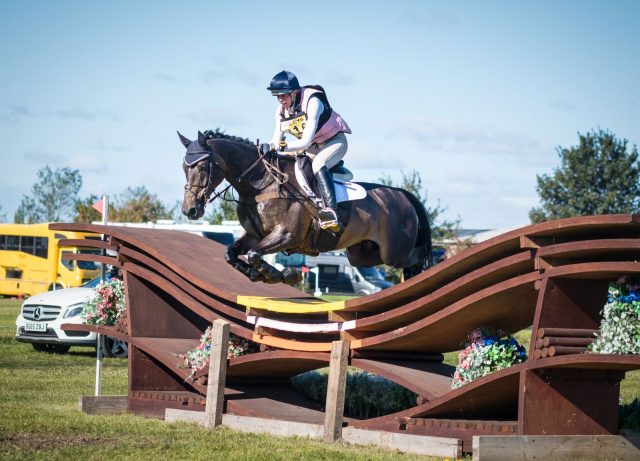 Little Downham will make the leap up to international status from 2020. Photo by Tilly Berendt.

“For Keysoe, this completes the collection,” said organiser Simon Bates. “We now run internationals in all three major disciplines and we see this as a testament to the team’s hard work and dedication and also as a result of the significant — nearing £1m — investment over the last 12-18 months. With good transport links and enhances facilities we now look forward to welcoming eventers from across the country to join us.”

The news of additional fixtures, too, has been marred by some frustration with the fixtures process.

“Little Downham are delighted to have been successful in their application to host a new CCI3*-S and CCI4*-S,” said Sarah Skillin of EquiConsulting, who organises sponsorship and media for the event. “However, that delight is tinged with frustration at still being made to run against Osberton, who are both geographically close and will also run 3* level classes. When our tender was submitted we applied to run in a four-week window on the assumption that we would not be conflicting with another UK event. Our tender was one with the rider at its heart and the sport as the focus of the event.”

Are you an organiser or competitor who has been affected by the fixtures list? Do you think the changes made are positive, or would you like to see more transparency from the board? Let us know what you think in the comments — remember, keep it kind and keep it productive!

[BE ANNOUNCES INTERNATIONAL AND BE CHAMPIONSHIP CALENDAR FOR 2020-2025]