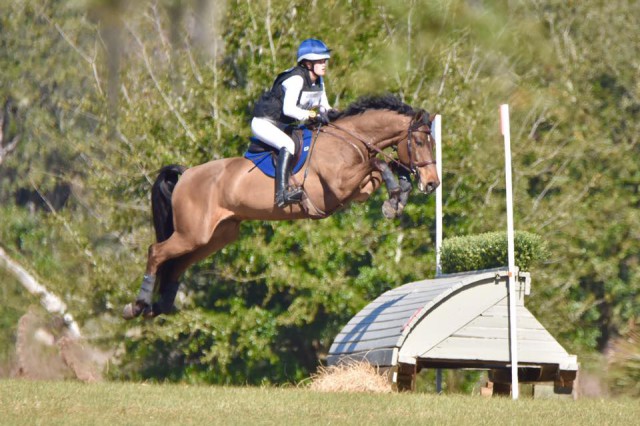 Buck Davidson cleaned up at Rocking Horse Winter II Horse Trials today, taking the first three places in the Advanced Test A division and finishing second in the B division. Copper Beach sat in second place after dressage on 28.6, with a clear show jumping round moving him up to the top of the Test A division. A clear round inside the time on cross country gave Buck and Copper Beach the win on 28.6.

This was the first Advanced run for “Sean,” an 11-year-old Irish Sport Horse gelding (Paddy Daly X Radolin, by Cloverballen) owned by Sherrie Martin and Carl and Cassie Segal, since the 2016 Nutrena USEA American Eventing Championships last year. Buck told EN the decision to skip a fall season was made strategically with the horse’s longterm career in mind. 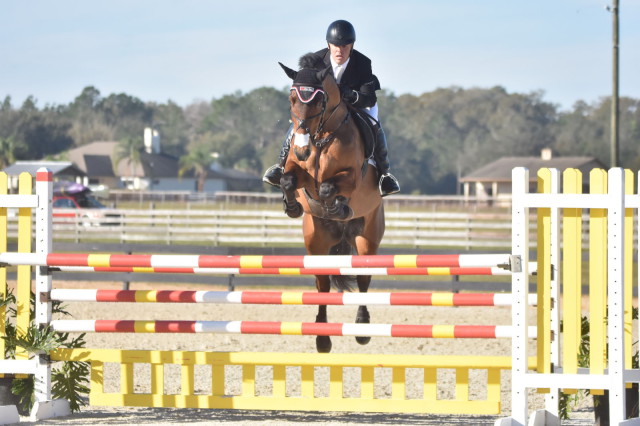 “One of the things that was a big benefit to (Ballynoe Castle RM) was from the time he was 7 he did a big team trip in the summer, so he always had a long break after that. He never actually did Fair Hill,” Buck said. “I thought it was in Sean’s best interest to have a little break. He’s 11 now but he’s done a lot. I want my horses to be healthy and happy at 16, so sometimes you need to give them some time in the field.”

Copper Beach is aiming for Rolex Kentucky this spring, along with his stablemates Park Trader and Petite Flower, and Buck said today was about an easy run with bigger events in mind. “I didn’t push him to go fast today. He just galloped along and found it all very easy. He changed a lot after Kentucky last year. He’s much more relaxed and confident. I’ve had him since he was just starting his eventing career. I know him now and he knows me, and we’re a little more relaxed together.” 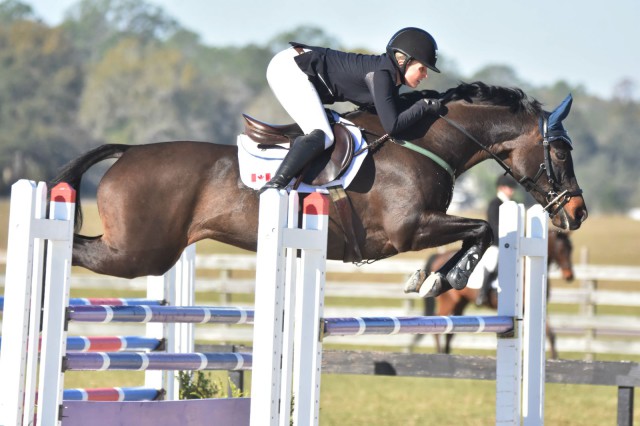 Buck took second place in the Test A division with Halimey, who led after dressage on 27.5. One rail down in show jumping dropped the 12-year-old Trakehner stallion (Askar X Hamamelis, by Pardon Go) owned by Christine Turner to second place on 31.5. He finished on that score with a fast and clear cross country round inside the time.

“We’re taking it slow with Halimey, getting him confident and concentrating on getting him fit,” Buck said. “He’s super careful and he’s the kind of horse I like to ride. He just wants to believe in you. He’s a stallion, and I do a lot of easy schools with him and lots of praising him. If he gives you a big effort, he wants to know you’re proud of him. He went around today ears pricked.”

Third place went to Buck and Carlevo, who also started the competition in that same spot on the leaderboard with a dressage score of 29.7. One downed pole in show jumping and 8.8 time penalties on cross country saw the 10-year-old Holsteiner gelding owned by Carlevo LLC finish on 42.5. 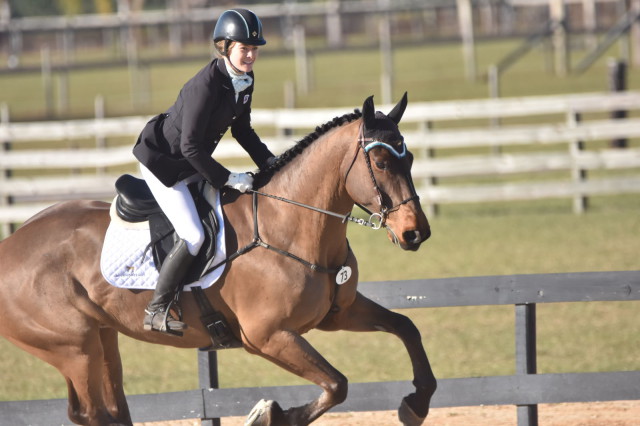 Just one other pair chased the optimum time of 6 minutes, 13 seconds in the Test A division: Chelsea Kolman and Dauntless Courage in their Advanced debut to finish in fifth place on 47.1. Go girl go! If you missed EN’s feature on Chelsea and “Dante,” a lovable Percheron/Thoroughbred cross, click here. 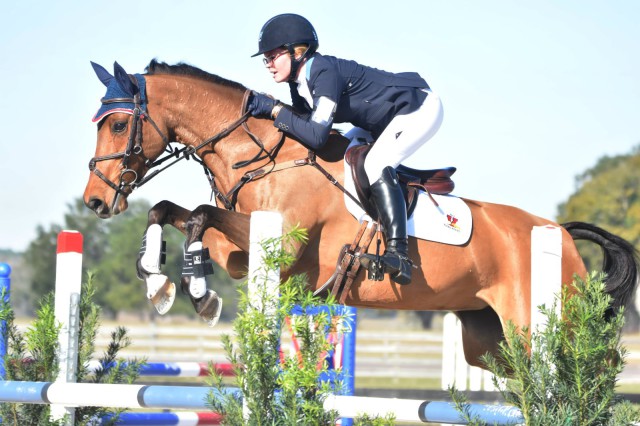 Looking to the Test B division, 20-year-old Alyssa Phillips and Bliss III delivered the lowest final finishing score across the two divisions. Sitting in second place on 25.7 behind Ellie MacPhail O’Neal and RF Eloquence after dressage, they went clear in show jumping and made the time on cross country to move up to first and take the win.

Alyssa and Bliss, an 11-year-old Dutch mare (Corland X Lenja, by Hemmingway) she owns with Julie Phillips, have been partnered together for four years now, and Alyssa said things have really started to click between the two.

“She was a little bit of a crazy thing back in the day. As we moved up to Advanced she’s actually jumped better because she would naturally back herself off from the jumps,” Alyssa said. “She was so game today, and I thought I might as well go for the time and see where she was at. She romped around and was with me every step of the way.”

Alyssa trains with Angela Bowles, who has been riding the mare more recently after Alyssa injured her back in the fall. Angela took the reins for the $100,000 Land Rover Wellington Eventing Showcase earlier this month, where they finished in ninth place.

“Angela has really helped me with the horses, and I am so grateful to her for everything she has done for me. I needed to put it together with Bliss today, and that happened in large part because of all the work Angela has done with me. I know that’s going to help us a lot as we look ahead to the rest of the season.” 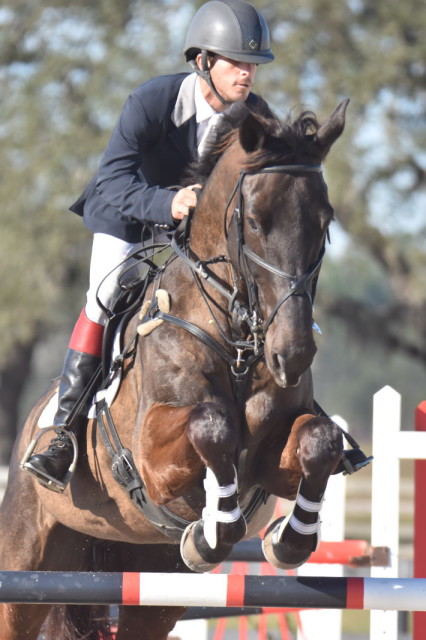 Alyssa is aiming to target her first CCI3* at Bromont in June, with a goal of Fair Hill CCI3* in the fall. In the meantime, she’ll be traveling back and forth between the East Coast and Texas, where she’s a sophomore at Texas Christian University studying strategic communications and business.

The long hours on the road are worth it for Bliss, or “Queen B” as she’s known in the barn. “She has the biggest personality but she’s the kindest horse,” Alyssa said. “She has the sweetest eyes.”

Buck Davidson and Petite Flower finished second in the Test B division on their dressage score of 26.6. After Petite Flower skipped around cross country inside the time, Buck told super groom Kathleen Murray: “I wish Kentucky was next week.” The 15-year-old Thoroughbred mare (Amber’s Lust X Tears of Loss) owned by Caroline and Sherrie Martin has turned over a new leaf, he said.

“In all three phases she feels much more relaxed and much more confident. She feels stronger,” Buck said. “I feel like she trusts me, whereas last year she was pretty sure she trusted me. She went around cross country today like it was a joke. She ripped through the corners and skinnies.”

While Buck is relishing in strong finishes for all of his Advanced rides (Carl and Cassie Segal’s Park Trader also finished seventh in the B division) he said his real focus is on tomorrow, when he will resume his groom duties to Kathleen and Ballynoe Castle RM in the Sr. Training Rider-A division.

We’ve talked extensively about the last hurrah for “Reggie” ahead of his official retirement at Rolex this spring, so click here and here if you missed those stories.

“The highlight for the barn this year is having Kathleen compete Reggie. The fun that the two of them are having is unbelievable,” Buck said. “Reggie loves going to shows, and going around Training level he doesn’t even break a sweet. It’s so cool to see and it makes everybody happy. Carl had tears in his eyes after their dressage the other weekend. It’s the reason we do this sport. The relationships are amazing to watch.”

Daisy Trayford and Normandy Soldier rounded out the top three in the B division. We have to send a massive kudos for delivering a personal best dressage score of 29.6. They added just 1.6 time penalties on cross country to finish on 31.2. Lisa Marie Fergusson and Honor Me were the only other pair to make the time in this division to finish fourth on 34.4.

The Intermediate divisions wrapped up with cross country this morning, with Jennie Brannigan and Casarino winning the A division on 26.1. The 10-year-old Holsteiner gelding owned by Amy Ruth Borun is with Jennie to be sold, and he added just one rail to his dressage score of 22.1 to take the win.

Looking to the B division, Cooley On Show continued to show he’s a serious horse to watch with Sharon White in the irons. Tied for the lead with Lauren Kieffer and Veronica on 23.8 after both dressage and show jumping, Sharon and “Louie” took the win on 27.4 with a clear cross country trip and 3.6 time penalties. Keep your eye on this one!

Clayton Fredericks and Katie Ruppel’s Houdini added 4.0 time penalties to their dressage score to finish in second place in the Intermediate B division on 29.0. Lauren Kieffer and Landmark’s Monte Carlo rounded out the top three on 32.6.

Christine Appling and Amelie were one of three pairs to make the optimum time of 5 minutes, 39 seconds in the Intermediate Rider division to move from 12th after dressage to finish in first place on 29.0. Cornela Dorr and Sir Patico MH finished second on 33.2, with Shelby Brost and Namaste in third on 34.4.

Click here to view the full live scores from Rocking Horse Winter II Horse Trials and here to view lots and lots of videos courtesy of David Frechette, AKA Thehorsepesterer. Stay tuned for more photos from the one and only JJ Sillman throughout the weekend, and if you see her wandering the show with her camera in hand and wearing her awesome hat, be sure to say hi. Go Eventing. 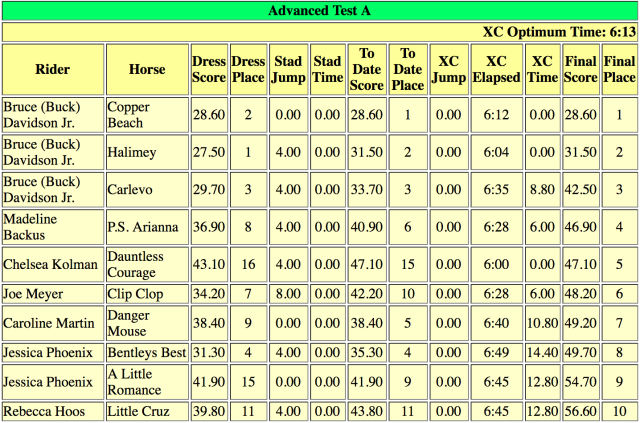 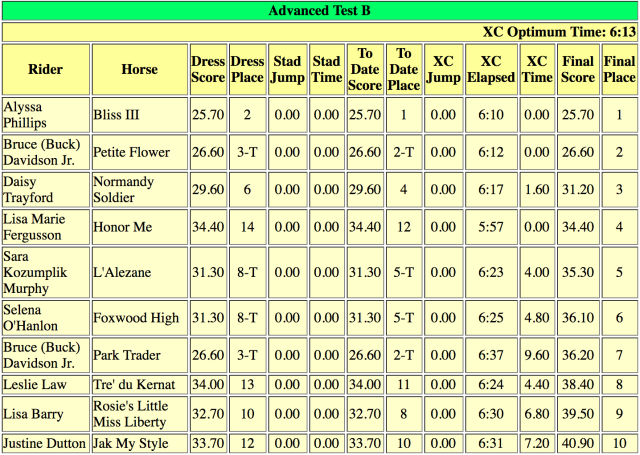