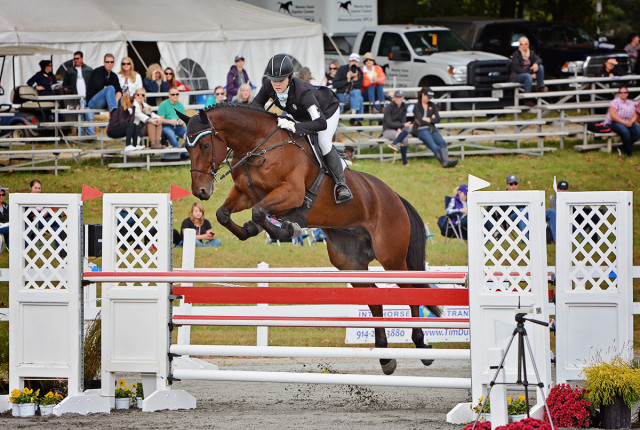 It wasn’t more than a year ago that Kentucky-based eventer Chelsea Kolman and her Percheron/Thoroughbred cross, Dauntless Courage, stole our hearts. When we first met Chelsea and “Dante,” they were just beginning to get their sea legs, collecting top places at the Training and Preliminary level with a a goal to represent Area VIII at the Adequan North American Junior and Young Rider Championships.

“Young Riders was our most recent goal,” Chelsea said. “I like to set goals as stepping stones so I don’t feel trapped if I don’t get to one of them.” After obtaining their qualification at Poplar Place earlier this year, Chelsea set her sights on the Colorado Horse Park and the CICY2* at Young Riders. 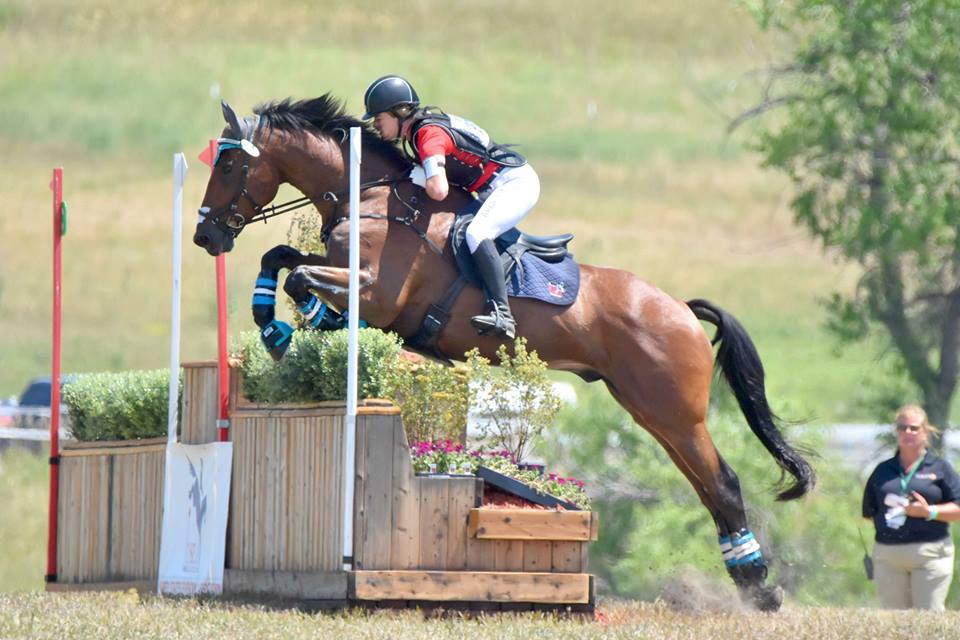 Chelsea and Dauntless Courage at NAJYRC. Photo by JJ Sillman.

Coming of Age in Colorado

“We traveled to Colorado a week early, which was tough for Dante, who isn’t used to being in a stall,” Chelsea said. Though it was difficult for 18-hand Dante, who lives out at home, to be in a stall during Young Riders, he still came out guns blazing to lead the Area VIII team following dressage.

Chelsea knew after walking cross country that it would be a tough course that would test her horse’s rideability. “It was definitely unlike any course I’ve ever ridden,” she said. “It was a long course of maxed out tables, but we all had good cross country horses. I was teamed up with Margaret Ragan and Woods Baughman, and I knew we had a good shot on cross country.”

Through her many adventures with Dante, Chelsea has gotten to know her horse like the back of her hand. “He has two ways of going: He’s either spot on and will jump exactly when I tell him to, or he will get really deep to the fences and just pop over them. Unfortunately on cross country day, the latter is what I had.”

Though Chelsea and Dante broke a frangible pin on cross country, they still went inside the time and found themselves in team gold medal position thanks to double clear rounds from Margaret and Woods. The last rider to go for Area VIII in the show jumping finale, Chelsea was feeling the pressure as she entered the ring to try to seal the gold medal for the team.

“I came to the fifth jump and my rein broke. I pulled him up and leaned over to tie it as quickly as I could. Surprisingly, I remembered where I was going after that. We had two rails after that, but that was a really big moment for me that he let me tie that rein back. It was unbelievable,” Chelsea said.

“He typically has good composure, but what people don’t realize is that he can lose his brain sometimes, and so I was fully prepared for him to try to jump out of the arena after that. It just melted my heart that he stopped. We ended up with a bronze medal, and it was definitely our team’s highest show jumping score, but I was thrilled with him.” 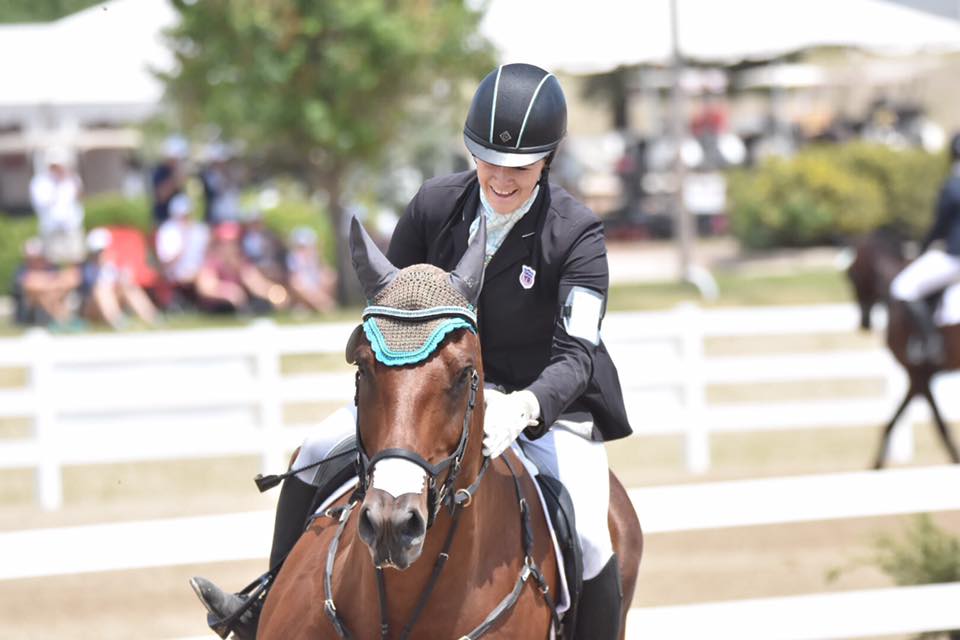 With Young Riders checked off on Chelsea’s list of goals, she next looked ahead to the Dutta Corp Fair Hill International CCI2* in October. “Fair Hill was actually planned at the beginning of the year. I came to my coach Cathy Wieschhoff after our last Training level and told her that I wanted to take this horse to Young Riders at the two-star level. She kind of chuckled a bit, but said that if I put in the time and was consistent that she’d do our best to get us there,” Chelsea said.

“I know she believed in me, but she hadn’t known me for that long and to look at the horse he was, nobody thought he’d get there. But once Cathy saw us move up to Intermediate, she said, ‘I want you to get to Young Riders, and then I want you to take him to Fair Hill in the fall.’ So that’s been the goal.”

Chelsea is a self-proclaimed planner who likes to set her goals years in advance. “A lot of people set their sights on one thing and are gutted and broken if that doesn’t pan out,” she said. “Dante cannot handle that. He feeds 100 percent on me, and I never want to make him feel as if he isn’t good enough or hasn’t done his job. I try to set us up to succeed so that if one show doesn’t work out, we have another opportunity to get to our final plan.”

Chelsea never really pictured herself as a rider at the upper levels. When she first began to catch the eventing bug, she thought she’d try to get to the Preliminary level and didn’t have ambitions to go above that. With Dante, Chelsea always promised that she’d take him as far as he wanted to go, but no further. It didn’t take long for Dante to surpass all expectations and for Chelsea to begin picturing red numbers.

“By about halfway through our Prelim year I’d planned out our whole Intermediate season,” she laughed. “I started doing cross country with him to calm his brain, and he just loved it. He was so good at it that I thought, ‘I could never take that away from this horse.’ I thought I would be content running Prelim, but I knew we had more in us.”

Fair Hill was a big goal, and fitness was a challenge for the big-bodied draft cross. Chelsea made it a priority to put horsemanship and Dante’s needs first every step of the way. “My theory on fitness is not to overdo it because he’s so big. He swims three times a week, and I have to do sprints for our gallops because his heart rate does not elevate easily,” Chelsea said.

“He never lost his shape over the fences at Fair Hill and he made the time, but he was definitely tired by the end of the course. Now that we’re starting to look at Advanced as the next step, I know we’ll need to get him even more fit going forward. But, he wasn’t fit to run the three-star at Fair Hill this year because he isn’t running three-star right now. He was just as fit as he needed to be.”

Chelsea and Dante scored 56.3 in dressage to sit in 30th place after the first phase. A double clear cross country trip boosted them to 10th place, and they added one rail in show jumping on the final day to finish in 11th place on 60.3 at Fair Hill. 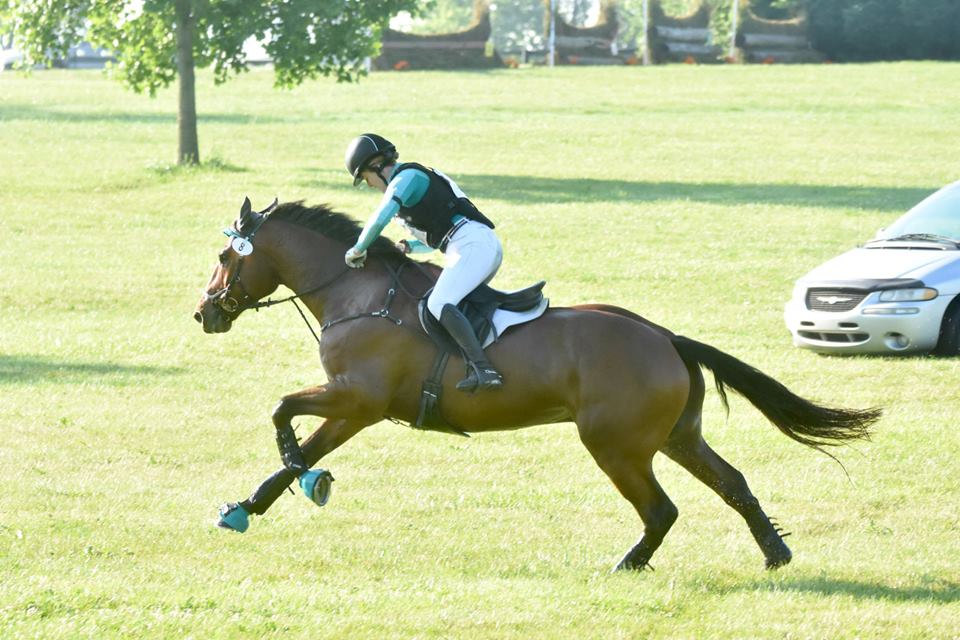 Chelsea and Dante at Midsouth. Photo by JJ Sillman.

At home, Dante will enjoy a bit of downtime, which includes as much time as possible in turnout getting fuzzy, before he and Chelsea go back to work to prepare for the 2017 season. “You wouldn’t even recognize him if you saw him when he’s on vacation,” Chelsea said. “I like for him to be a horse as much as possible. It keeps it fun for the horse, and you never want to take the fun out of it for them.”

Chelsea already has her plans laid out for the next season with her endlessly courageous horse. “I’m going to work my butt off to get us ready for the next level,” she said. “His heart goes to the moon and back. I know he’d do anything I ask of him, so it’s going to be about returning the favor and listening to him. I’m just going to strategically get us where we need to be because this is what he was born to do.”