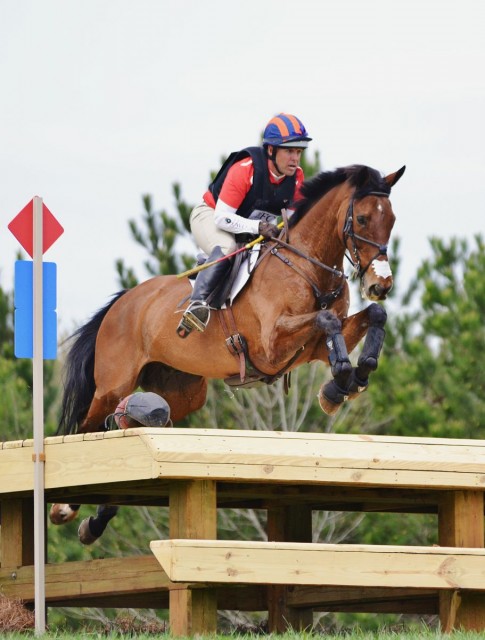 Buck Davidson and Ballynoe Castle RM at The Fork. Photo by Jenni Autry.

Ever since Buck Davidson entered an impressive five horses at Rolex, we’ve been waiting to see which three he would choose to ride. He decided this morning those three will be Caroline and Sherrie Martin’s Petite Flower and Ballynoe Castle RM and Park Trader, both owned by Buck’s longtime supporters Carl and Cassie Segal. “All five of the horses are fit, sound and well,” Buck said this morning. “The Apprentice and Mar de Amor will go to New Jersey.”

As a member of the Petite Flower fan club, I’m thrilled to see this little powerhouse go. And she’s a special entry for Buck’s team too, as Bruce Sr. bred the mare. She capped a great season last year by winning the Galway Downs International CCI3*, but has had some stops on cross country early this season. With this being her first four-star, Buck will likely be looking to give Flower an easy go. But Buck is also one of the gutsiest cross-country riders out there, so don’t be surprised if he ends up delivering a clear, fast trip.

This will be Park Trader’s second Rolex, as Kobe completed his first four-star at this event last year, finishing in 22nd place. Kobe has always been a challenging, quirky ride — look to see if Buck wears a crash hat in the dressage at Kentucky! — but the hard work has paid off, culminating in a second-place finish in the Dutta Corp Fair Hill International CCI3* last fall. They’re poised for a great crack at Kentucky. 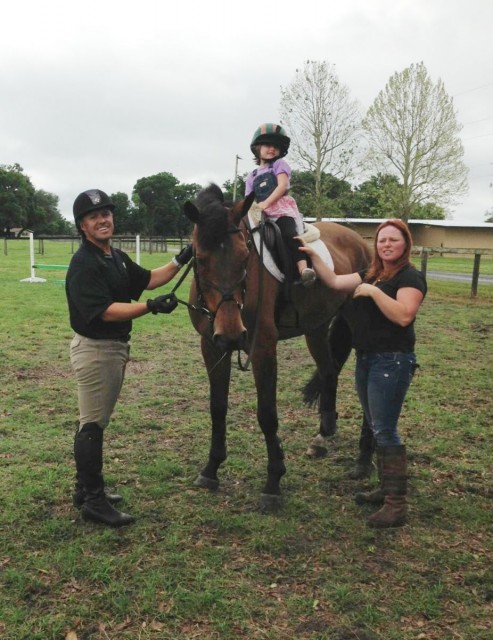 And then there’s the star of the show, Balleynoe Castle RM, who found time during his spring prep for Rolex to not only play a starring role in super groom Kathleen Blauth’s wedding but also to give pony rides. He’s pictured above with Kathleen’s 3-year-old daughter Riley Murray during the horse’s final ride before shipping to Kentucky. Buck and Reggie were last year’s USEF National Champions at Rolex thanks to their fourth-place finish, but don’t think that’s good enough for Buck.

He told me at Carolina International that the horse is so good he feels like he needs to apologize to Carl and Cassie every time Reggie doesn’t win. With Andrew Nicholson returning with last year’s winner Quimbo, William Fox-Pitt looking to take the victory himself with 2013 Pau winner Seacookie TSF and a slew of competitive American combinations also entered, it’s going to a very exciting Rolex Kentucky.

It’s also worth noting that both Balleynoe Castle RM and Park Trader were also accepted at Badminton, so that will free up two more spots on the entry list. Harry Dzenis and Xam and Megan Heath and St. Daniel are the next two pairs on the waiting list there. Happy Easter, EN! Go Rolex, and Go Eventing.