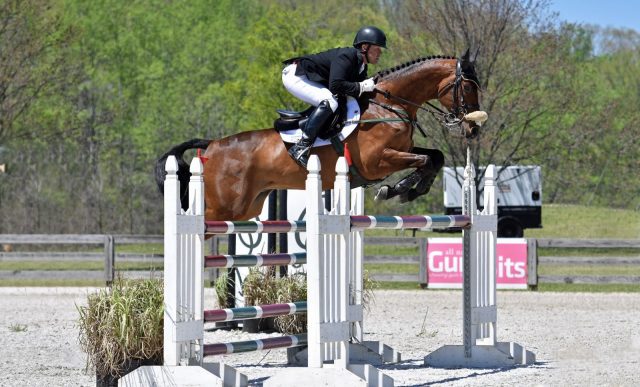 It’s been a wet and windy weekend so far at Chattahoochee Hills in Fairburn Georgia, but it was Buck Davidson who prevailed following dressage and show jumping to lead the CIC3* aboard Carl and Cassie Segal and Sherrie Martin’s Copper Beach and Carlevo LLC’s Carlevo.

Buck and Copper Beach, who is coming off of an 11th place finish in the CIC3* at Carolina International and is aiming for Kentucky later this month, earned the only score in the 30s from judges Christina Klingspor and Susan Graham White to take a 38.7 into show jumping.

Over a course that yielded just five clear rounds of 19 starters, Copper Beach turned in a flawless round to cement his lead and remain in the 30s heading into tomorrow’s cross country.

Copper Beach is an 11-year-old Irish gelding who will contest his second CCI4* this spring after finishing in the top 20 in 2016. He went on to win the CCI3* at Rebecca Farm in the summer and has come out swinging for the fences this year, winning his first two Horse Trial starts before continuing on to Carolina.

As is the case with the final preps before a spring three-day, Buck said his ultimate goal this weekend is to produce confident rounds from his horses to encourage them to peak at their respective goal events. “The goal for me is Kentucky (with Copper Beach), so I want him to go out and have a confident run. I’m not too worried about time, I’m using this as a fitness run. He feels really great right now.” 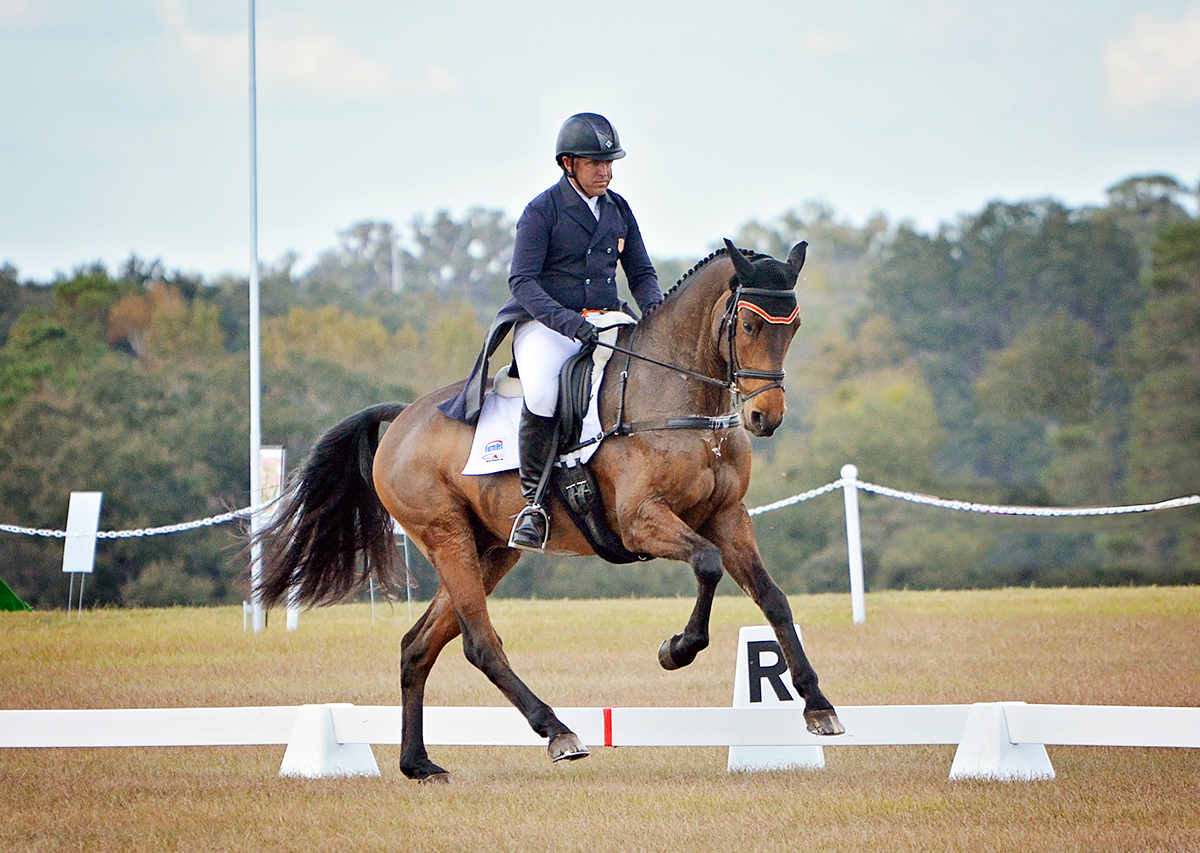 In second place is Carlevo, a 10-year-old Holsteiner gelding who was previously campaigned by Dirk Schrade. Carlevo finished his 2016 season with a top 10 finish in the CIC3* at the Ocala Jockey Club and also won his first Intermediate start in 2017 at Rocking Horse. Carlevo earned a 41.5 and added one second of time over Marc Donovan’s show jumping course earlier this afternoon to sit in second overnight.

Carlevo is aiming for the CCI3* at Tattersalls at the end of May, so Buck is working to get him happy and confident as he looks ahead to the international trip. “He’s very reliable in the dressage, he’s beautiful and he’s relaxed so I was pleased with him today. He has been jumping great this year, and at Carolina he had the last few down because we were the last to go and all of the other horses had left so I feel there’s an explanation for that even though it was a bit of a bummer. But he’s a super young horse, I was happy with him today and we’ll see how we get on tomorrow.”

Carlevo will likely head to Jersey Fresh to contest the CIC2* as his final prep for Ireland, following a similar path that Buck took with Copper Beach when he traveled to Tattersalls in 2015. 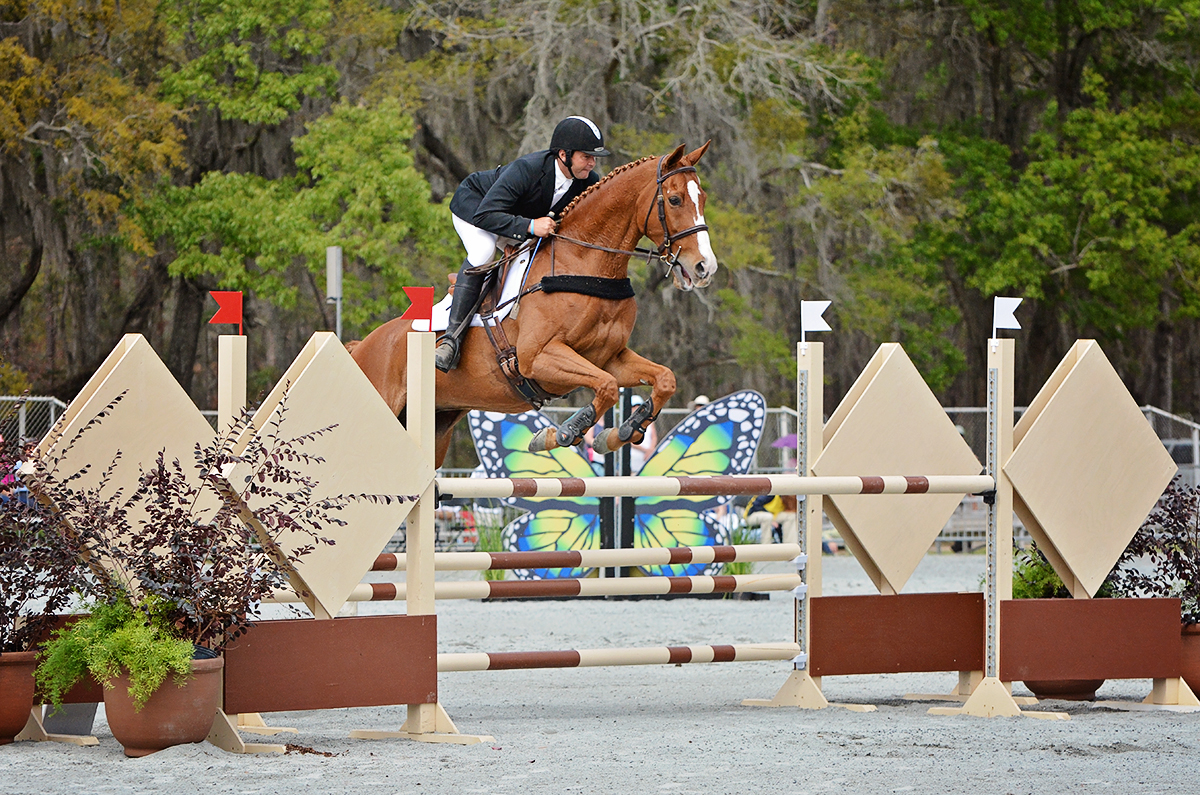 Clayton Fredericks and Katie Ruppel’s Houdini will hold down third place after two, adding nothing to their dressage score of 42.8. Clayton and Houdini, an off-track Thoroughbred, won the CIC2* at Red Hills last month, and Katie will be taking the reins back from Clayton to contest their fifth CCI4* together at Rolex.

Looking to the remainder of the leaderboard, Lauren Kieffer and Vermiculus are the only remaining score in the 40s, sitting in fourth on a 48.3 after adding four jump and one time penalty in today’s show jumping. Buck Davidson continues his dominant run this weekend with a fifth place position aboard the stallion Halimey on a score of 50.4 with one rail down today.

In the CIC2*, it’s Bobby Meyerhoff and his talented mare Fortuna who will take the lead into cross country on a score of 52.0 following a double clear show jumping effort. Bobby told EN that he has some serious talent coming up the ranks following his announcement that he would be retiring his top mount Dunlavin’s Token, and this 7-year-old Dutch mare is certainly showing her chops in just her second CIC2* start. She most recently came fourth in the CIC2* at Carolina International, where she finished on her dressage score. 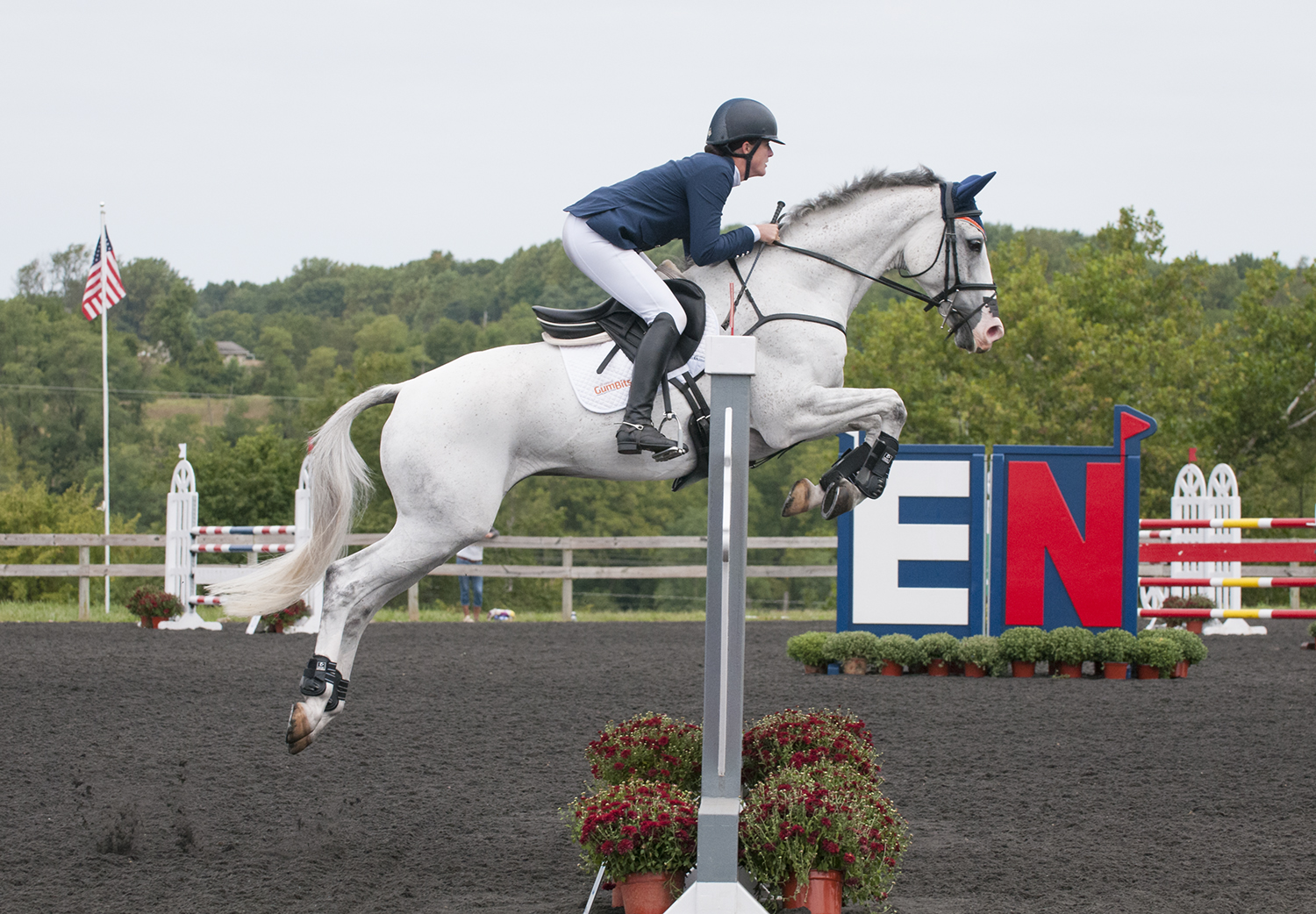 Bobby and Fortuna hold the sole double clear effort of the division, which bumped them from fifth into first place, followed by Lauren Kieffer and Landmark’s Monte Carlo, an 11-year-old Irish/Thoroughbred cross owned by Ms. Jacqueline Mars. Lauren had two rails down to take a two-phase score of 55.0 into tomorrow.

And rounding out the top three in the CIC2* is again Bobby Meyerhoff with another young talent, Rascal Rap. A 9-year-old Oldenburg owned by Diane Kearney, Rascal Rap is making his fourth CIC2* start, most recently completing the CIC2* at Carolina International.

The CIC1*, currently led by Lizzie Snow and West River, show jumps this afternoon and the Advanced division will run a one-day competition tomorrow. The CIC3* cross country course is open at 5 p.m. this evening, looking ahead to a 12 p.m. start tomorrow. There has been a lot of rain in the area over the last few days, but riders and officials are optimistic that the course will dry out thanks to the help of Mother Nature and a fair amount of wind.

We’ll have much more from Chatt Hills to come tomorrow, so stay tuned for the exciting finale! Go eventing.