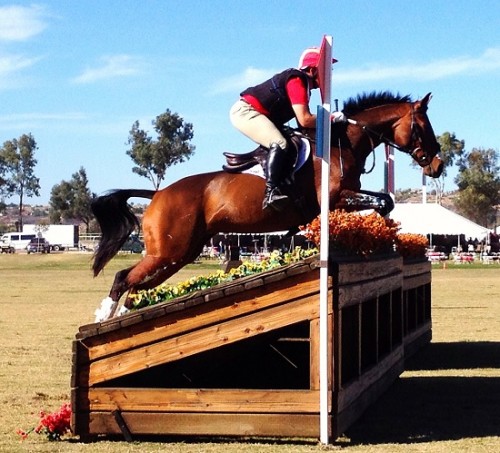 Buck Davidson just told us that he’s decided to retire Absolute Liberty after the mare sustained a mild suspensory injury at Galway Downs last weekend. Absolute Liberty, a 10-year-old Oldenburg mare owned by Buck and Sharon Will, went out to California to contest the CCI3*, and she sat in second place after the dressage on a score of 50.3. But things started to unravel on the cross-country course, and Buck instantly knew something was wrong.

“I was galloping along just past the six-minute mark, and all of a sudden her gallop changed,” Buck said. “I’ve known Libby since her first event and ridden her for her entire career. When you know a horse that well, you know when something has changed. I thought she might have taken a couple of funny steps, but she stumbled badly going up a hill right that, so I pulled her up as hard as I could and we walked home.

“I just knew in my heart something wasn’t right,” Buck said. “The last thing I wanted to do was have a really bad injury on my hands. That’s the advantage of starting them from the beginning and knowing the horse its whole career; you just know when something’s wrong. She’s sound now, but there’s some damage there. Sharon and I feel like she’ll have a longer, better quality of life now if we stop. Because we didn’t run her into the ground, Sharon will have a nice riding horse.”

In addition to being retired to a light riding career once she heals, Buck said he and Sharon have big plans for Libby to become a broodmare to produce the next generation of eventers. “She could probably come back from the injury, but she’s done a lot for us,” Buck said. “Sharon and I are excited about her having some really nice babies.”

Libby most notably served as Buck’s team gold-medal winning partner at the 2011 Pan American Games. She now takes that achievement into her new life as a broodmare, and we wish Buck and Sharon all the best as Libby heals and moves on to this next chapter of her life. It’s always wonderful to watch riders and owners make the best decision for their horses. Go Libby.