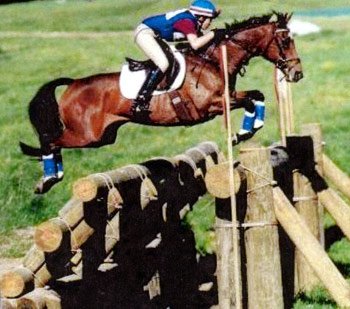 Skyeler and Savannah at Plantation. Photo by Tim Icke.

Savannah was born in Colorado in 1986 and registered to the name of “Strikette.” With Bold Ruler bloodlines, her breeders hoped she would earn them a lot of money at the track. Standing only 15.2  handswhen fully grown, the small bay mare wasn’t impressive to look at, nor was she successful as a racehorse. But she soon transitioned into the life of a sport horse and found her calling in eventing.

Julie Richards believed in the diminutive mare, despite her difficult personality. Savannah was not sweet, cuddly or kid-friendly. She was an intense stall weaver and intensely mareish, which created a constant nervous energy around the barn. However, this fire and vigor that she displayed in every aspect of her life is what made her an exceptionally brave event horse. Savannah and Julie successfully competed through the Advanced level of eventing, with numerous horse trials placings, as well as success at the two-star level.

In 1999, Savannah met her match in the form of 14-year-old Skyeler Icke Voss. Julie was teaching lessons at the Difficult Run Pony Club camp that year and noticed that Skye was riding a not-so-talented horse and attempting to compete in eventing. At the end of the camp, she was impressed by Skye and mentioned to her parents that a more capable horse was a good investment. Savannah was 13 and slowing down from the upper levels due to an old knee injury. Despite the hot attitude and the arthritic knee, the two small athletes were a perfect match.

It wasn’t an easy transition, however, as Savannah was an extremely sensitive upper-level horse, and Skye had only scraped around a few Novice level events thus far in her career. “I had always ridden green or naughty horses, and I felt Savannah’s extensive upper-level experience was actually harder for me to adapt to at a young age,” Skye said. “She had tons of speed and scope and was a very sensitive ride. She came to me directly after campaigning at the Advanced level, and she thought teaching me to go Training level wasn’t very exciting.”

Savannah found no problems with running fast and jumping clean, but she did harbor a distaste for the dressage. “After all her success with Julie, many people would have called her ‘push button,’ Skye said. “I struggled to find which buttons Savannah would let me push, and she had strong opinions about each one of them.”

Skye’s very first competition on Savannah was at Training level, which was the first time she competed at that level. The mare piloted her very terrified teenage jockey around what appeared to be the biggest cross-country course of all time, and the pair ended up with a win in the Junior Training division. Skye’s trainer, Stuart Black, put her on the fast track to a Young Rider career, and within the same year they had finished third at the Bromont CCI* and qualified for the Area II NAJYRC team. 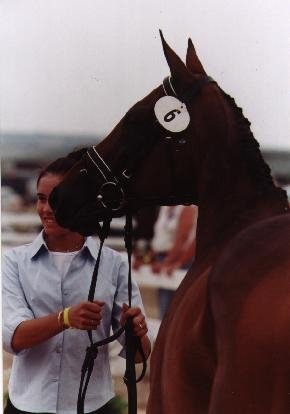 Savannah and Skye at NAJYRC. Photo by Tim Icke.

Savannah and Skye went on to compete in multiple Young Riders team competitions, conquer the CCI*, CCI2* and Advanced horse trials levels together — all the while defying the odds, as the older mare continued fighting an arthritic knee. “I owe my entire career to Savannah. She was my first everything,” Skye said. “No matter what mistakes I made, she was always 10 times wiser and smarter than the child on her back.”
In 2002, the pair competed in the Advanced division at Plantation Field Horse Trials. Skye was only 17, but it was her 18-year-old year, and she could finally compete at Advanced. This horse trials was to be their last hurrah, as Savannah’s knee was reaching the end of it’s time.
“Everyone joked that you couldn’t see my helmet when Savannah and I were approaching the fences because she was so small,” Skye said. “She skipped around Plantation like the professional she was and finished fifth. As my dad and I pulled out of Plantation in our Jeep Wagoneer and two-horse trailer, Stuart walked up to me and shook my hand, saying, ‘Welcome to the big leagues, girly.'”

While Skye was in college, Savannah enjoyed a luxurious retirement in a field at home. After college, Skye went into the eventing business in earnest and began to take students. Amy Giordano was one of her very first and, like Skye, had struggled with difficult ponies and was unable to afford a nicer horse.

Savannah, feeling healthy and sound, came out of retirement to raise yet another teenager. At the age of 22, she competed at the USPC National Championships at Training level, jumping double clean and managing to live up to her reputation by winning the Best Conditioned Horse Award.

Savannah fully retired after that competition and is now 28 and living in a field right next to Skye’s house at Morningside Training Farm. Instead of raising young teenagers, she is now in charge of raising fresh young OTTBs in training for an eventing career. She is their babysitter in the field, hopefully teaching them how to be a fierce Advanced event horse like herself.