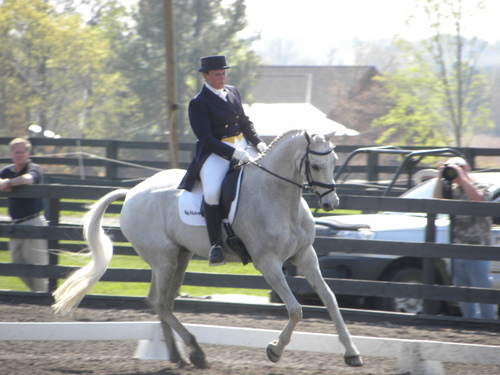 I finally remembered to drag my camera the half mile up to the dressage arenas.
This is a recap of Friday’s dressage action at The Fork.  We will have a XC preview either later tonight or early tomorrow morning.
CIC3*:

(1) My Boy Bobby delivered a very steady test to tie Allison Springer and Arthur for the lead in the CIC3* with a 36.9.  From watching Buck’s test, I got the feeling that Bobby could score even lower by showing a bit more movement, but he looks much much more mature than he did a year ago at Kentucky, where he looked very talented but unpolished.  Bobby beat his stable mate and A-listed Ballynoecastle RM by over 10 points.

(2) The strongest dressage test of the weekend might go to Will and Twizzel, who looked a cut above everyone else.  A break to canter from the extended trot affected their score and the continuity of the rest of their test, but that pair looked extremely strong.
(3) Woodburn exploded briefly in the canter, but recovered to deliver a solid 44.7 and sits in 6th.  TruLuck’s 9th place gives Phillip two in the top 10 of the CIC3*.
(4) Karen and Mandiba had a solid test, but Mandiba looked slightly tense, which held their score back slightly.  A more relaxed Mandiba would be sitting in the top 5, rather than their current CIC3* position of 8th.
(5) Heidi White and Northern Spy are probably disappointed to be sitting in 17th with Northern Spy’s talent on the flat, but the weekend is young, as they say.
—-
(6) Turning to the advanced division, Courageous Comet went very low with a beautiful-looking 23.7.  The scary thing is that Courageous Comet probably has a little more movement than he showed today, but the test was beautiful and a similar effort could put them in the top 5 at Kentucky going into the weekend.
(7) Amy Tryon looked strong on Leyland, moving into a four way tie with Mara, Phillip, and HSB for 2nd on 27.3.  Amy and Leyland looked like anther pair that has more to display on the flat, which is scary considering their score.
(8) Representing Canada, Ian Roberts and Napalm showed that their winter dressage training has paid off and delivered a solid 31 to sit in 11th in the advanced.
(9) CIC3* and advanced judge Jim Graham was very forgiving; several horses had meltdowns, but ended up with pretty low scores because the rest of the test was solid.  I like a judge with a short memory, rather than those who hold a grudge for the rest of the test after a mishap.  Each movement should be scored by itself.  Go eventing.
(10) Phillip has 3 horses (Connaught, TruLuck, and Woodburn) in the top 10 of the advanced and CIC3*, Buck has two in the top 10 (Titanium and My Boy Bobby), and Mara has two in the top 5 (Nicki Henley and High Patriot).  I’m still shocked that Mara was able to get such a good score out of High Patriot.
0 0 votes
Article Rating
Subscribe
Login
Please login to comment
0 Comments
Inline Feedbacks
View all comments
More Insanity on Horse Nation >>