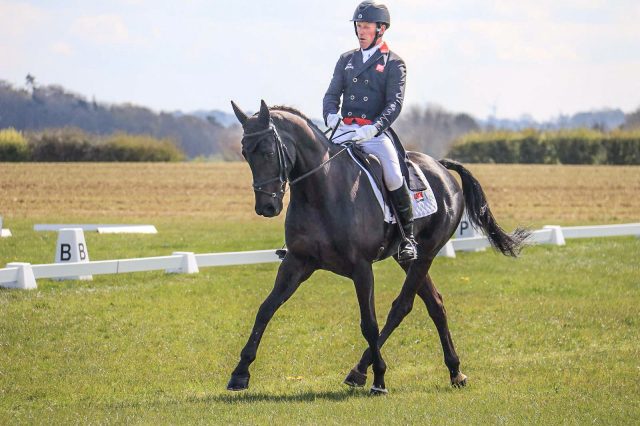 Every year at the Barefoot Retreats Burnham Market International Horse Trials, we invariably end up talking about one thing: the Townend phenomenon. Oliver Townend has a remarkable track record at the venue: he’s won more CCI4*-S classes here more than any other rider, and by no small margin. The venue first held classes at this level back in 2005, and since then, there have only been five runnings at which he hasn’t won one of the CCI4*-S sections: in 2005, he didn’t compete, in 2006, he finished fourth, in 2011 he withdrew one horse and ran into problems with another, in 2013 he was sixth, and in 2018, the event was abandoned due to inclement weather. So that’s nine years in which he’s been a winner here, but that’s not the total tally – he won both CCI4*-S sections in 2014, and finished first and second in the sole section held in 2015 and 2016. It’s an astonishing track record, particularly when you consider the quality of field this event hosts and the wide variety of horses he’s piloted here in that time period. Each year, he runs his top string of horses here, often choosing to use the neighbouring spring CCI4*-S at Belton as a combined test. But what is it that he loves so much about Burnham Market?

“They’ve got very honest ground here,” he explains. “We’re always concerned about the ground heading into the big ones, and you soon find out, with the number of horses that we run, which horses come out of which events well. They always seem to come out of here really well.”

That faith in the ground, plus a penchant for Alec Lochore’s bold, positive tracks means that Oliver trots out his top horses here each year and usually runs them all competitively – and when Oliver is running competitively, he’s a formidable beast indeed.

Today, we’ve seen him laugh in the face of leaderboards across the classes. Arklow Puissance won an Intermediate section on just his second run at the level (he won his first run at the level too, so we’ll be keeping an eye on this one), recording the only FOD in his class. Badminton entrant Ulises lost out on an Advanced win by less than a point, but again recorded the only FOD of the class. Kentucky-bound Cooley Master Class was given a planned slow run, which dropped him out of the placings in a hot OI section, but he jumped double clear and scored an incredible 21.4 in the dressage. Then, his Badminton entrant stablemates Cillnabradden Evo and Ballaghmor Class followed suit – the former delivered a 21.3 to lead section C of the CCI4*-S, while the latter put a 21.8 on the board to leap to the top of section B. The incredible thing? Not a single one of those scores was a personal best. Even so, they both managed to beat the former Burnham Market dressage record of 22.7, held by Pippa Funnell. 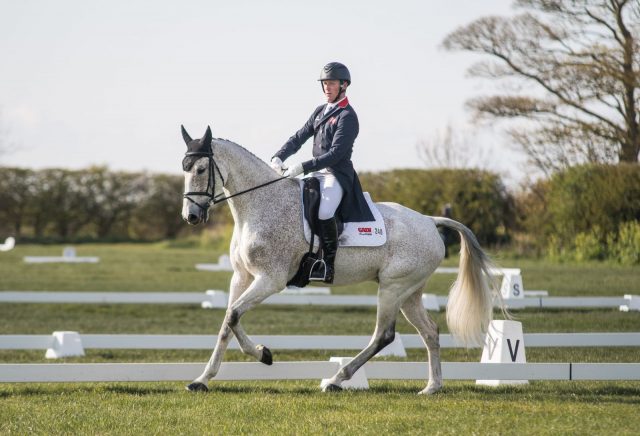 Ballaghmor Class is “as special a horse as I’ve ever ridden”, according to Oliver Townend – and he proved why once again today. Photo by Tilly Berendt.

Much has been written about Burghley winner Ballaghmor Class, the tricky, tempestuous talent who took the title in his first-ever five-star. He was just ten at the time, and although he’d been supplementing his fitness work by playing frequent games of lawn darts with Team Townend’s hardy grooms, he came good in all the right ways on the day it counted. As he headed into Badminton last season, Oliver told us that a horse’s second five-star is usually its toughest, especially when the horse is as clever as Thomas – he knew he was a superstar by then, and would stride into the atmosphere in the main arena with, perhaps, too much confidence in himself. But Thomas proved him wrong – he remained perfectly balanced on the cusp between submissive and expressive, and laid down one a 20.8, one of the best scores we’ve ever seen at the venue. He finished fifth, ultimately, and then second at Burghley, and now he heads back to Badminton as one of the odds-on favourites for the win. To see him edging towards his peak performance here, three weeks before the main event, is incredibly exciting. 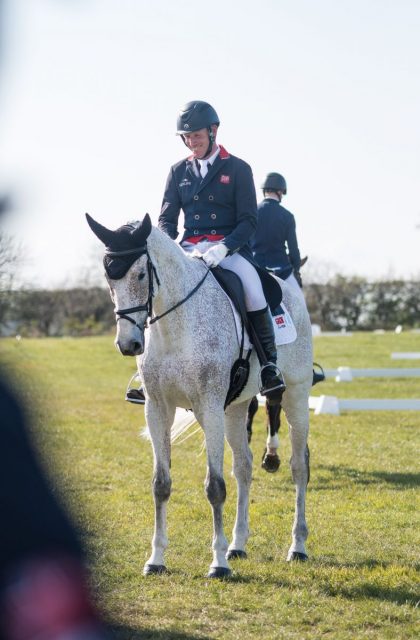 The feeling we all want after dressage. Photo by Tilly Berendt.

Less, perhaps, has been said about Cillnabradden Evo, and so we headed straight to the source to find out a little bit more about the former Andrew Nicholson ride.

For a long time, we’ve considered Gary a CCI4*-S specialist – the thirteen-year-old gelding has contested plenty of Event Rider Masters legs, and thirteen of his seventeen internationals with Oliver in the irons have been at the level. They’ve won three, been second in three, and finished in the top ten in two others, and after a two-year stint without a single three-day entry, we began to suspect that Gary had found his career niche. We were wrong.

Gary’s surprise entry at Pau last year left many eventing fans scratching their heads but, as Oliver put it, the trip was a ‘finding-out’ mission. The pair led the dressage there on a 22.7, and flew around two-thirds of the cross-country course up on the clock, before a small mistake on the approach to a reasonably uninfluential combination saw Oliver hit the floor. But he had found out what he needed to.

“It was a very good feeling that he gave me – we made a mistake, and it was a bit of a dumb mistake, but at the same time, he felt like he was getting the trip comfortably to that point,” explains Oliver. “He was on the minute markers and had his ears pricked and was still jumping good, so we were very happy with that. So we shall see!” 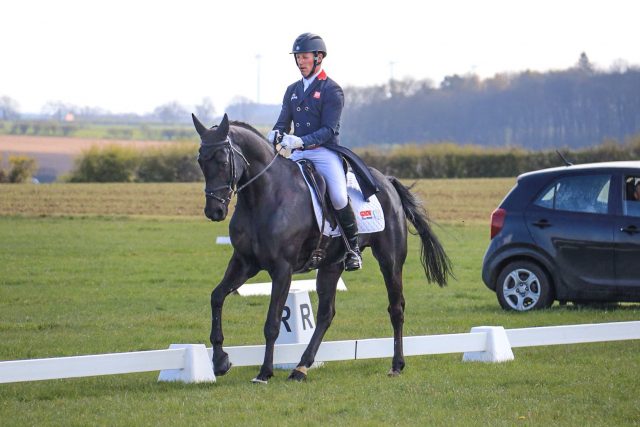 Now, ahead of what could be his first-ever Badminton in three weeks’ time, Gary is making good on his reputation as a well-nigh unbeatable first-phase performer.

“He’s getting very established; obviously the ERMs have done him the world of good, because he’s used to going in every couple of weeks and having to perform a good international-standard test,” says Oliver. “So he’s just gotten better and better. He’s established, he’s very nice in the brain, and he’s very amenable – he concentrates and takes his job seriously.” 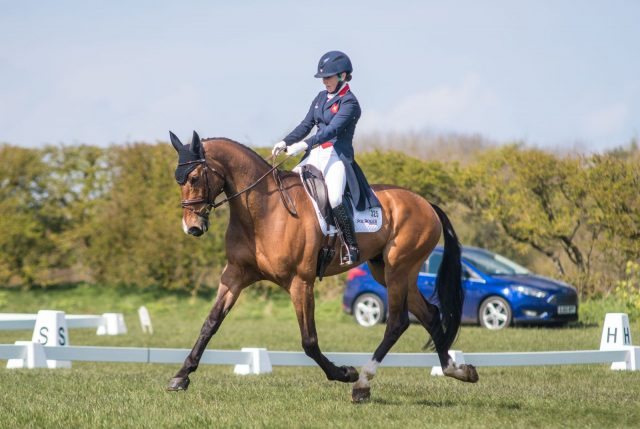 Laura Collett‘s impressive up-and-comer London 52 was second in Belton’s Grantham Cup two weeks ago, and he came back out on great form today, posting a 23.1 to equal his international PB. This will only be his third full season of eventing – the ten-year-old gelding showjumped before Laura bought him, and has enjoyed an astonishing career trajectory, which saw him take the title in Blenheim’s eight- and nine-year-old CCI4*-S last year. They sit second overnight in section C, just ahead of Badminton-bound Emily King and her Bramham under-25 CCI4*-L winner Dargun. 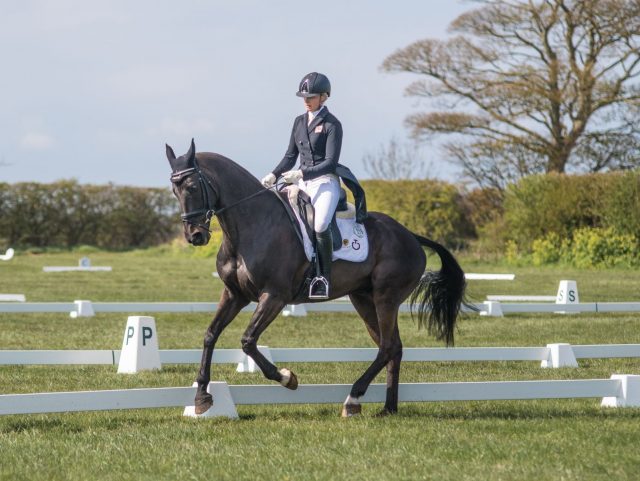 Emily King lands a spot in the top ten of both CCI4*-S sections – here, she pilots Brookleigh to a 27.2 and eighth in section B. Photo by Tilly Berendt.

Behind her is another young gun – Mollie Summerland and Charly van ter Heiden enjoyed a career-best performance at Belton, and yesterday’s score of 25.8 stands them in great stead to repeat the feat. 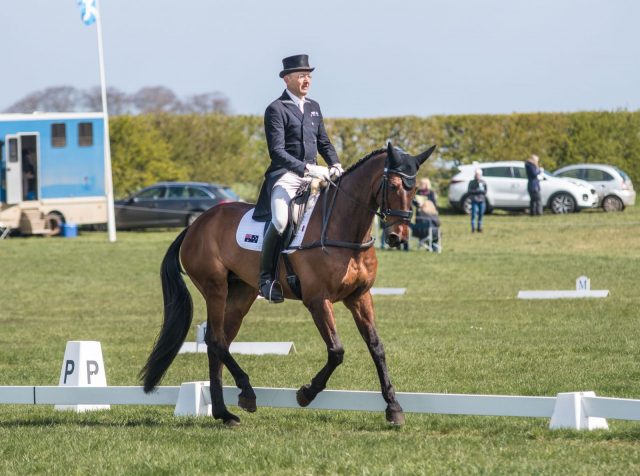 In fifth place, Bill Levett‘s Shannondale Titan makes good headway in pursuit of some consolation, after a disappointing Belton saw them miss out on a placing due to the new flag ruling. They sit on 26.3 as they head into tomorrow’s jumping phases.

In section B, yesterday’s leader Pippa Funnell holds onto second place with MGH Grafton Street, sitting on a very competitive score of 22.7. In third place is Will Furlong, who, like Pippa, heads to Badminton next month with his entrant, the talented mare Collien P 2. Their score of 23 is a significant personal best at any international level. 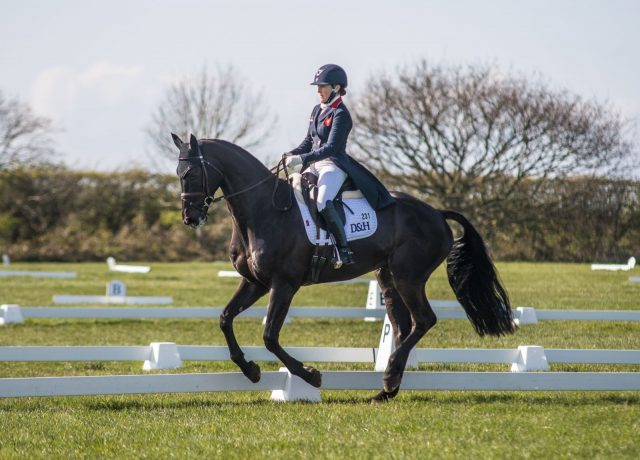 Laura Collett proves her strength in depth with a competitive first-phase performance aboard Dacapo. Photo by Tilly Berendt.

Laura Collett made an impression in this section, too, riding Dacapo. Third in last year’s Blenheim CCI4*-S, the Diarado gelding might be in the shadow of stablemates Mr Bass and London 52 for now – but we suspect he won’t be for long. He delivered a consistent, expressive test today to put a 24.5 on the board, allowing him to sneak ahead of fifth-placed Izzy Taylor and Monkeying Around, who are on 25.3 as they head into showjumping.

Tomorrow brings us an action-packed day of showjumping and cross-country action for both CCI4*-S sections – keep it locked on EN for all the thrills, spills, and burger van bills you could possibly want! 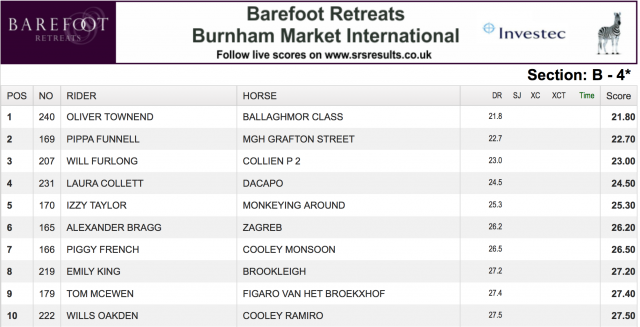 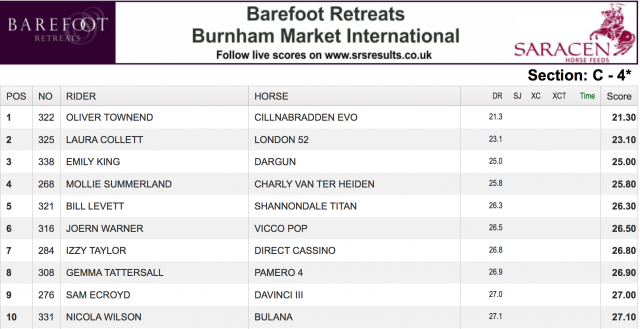