What comes to mind if I were to tell you to picture the origins of equestrian sport? In my mind’s eye, that origin looks a little something like this:

The roots of the sport of eventing, among others, are heavily military-driven. Originally designed as a fitness and suitability test for cavalry horses and the officers riding them, the sport of eventing has since evolved into the iteration of the sport that we see today after first becoming an Olympic sport in 1912 (and even then, only open to amateur riders in the military). It’s a noble beginning for any sport, but there is one undercurrent worth noting: cavalry riders were men, the officers training them were men. Indeed, a woman would not enlist in the U.S. military for the first time until 1917; women were not made a permanent part of the military until 1948. Even throughout the sport’s evolution, its foundational male influence can be seen in the way we now think about and train our horses.

This year, three women are setting out to show the world that there is another way – “how women do it” – and in the process, they hope to create more empowered, confident female riders ready to accomplish their goals and conquer their fears.

The C-6 Equestrian Energy for Confidence and Connection symposium series is the result of a collaboration between sport psychologist Dr. Jenny Susser, PhD, international dressage rider Mette Larsen, and international event rider Sinead Halpin. Jenny and Mette had begun teaching clinics together previously, and it was at one such event that Sinead was first introduced to the concept of energy-focused teaching. 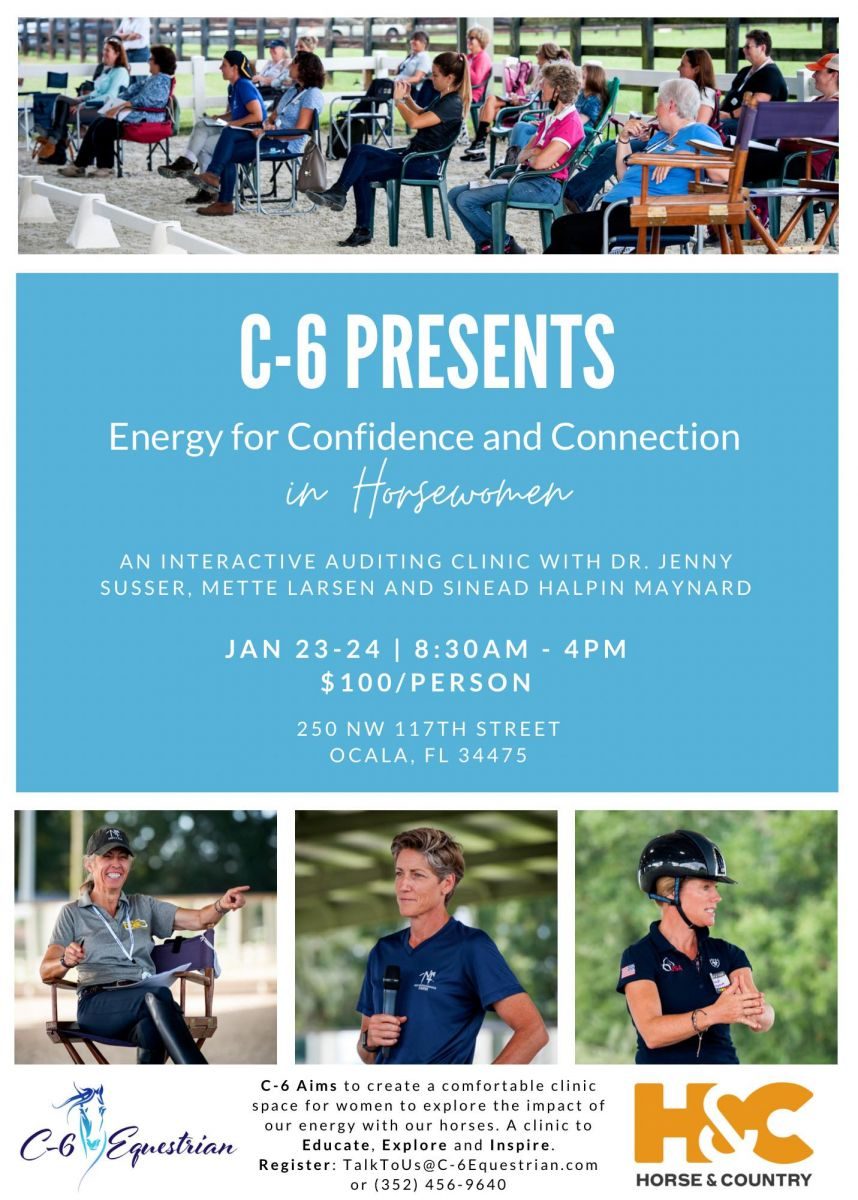 “I was so moved by the energy, so impressed by the concepts,” Sinead recalled. “The funny thing is, I wasn’t one of those people who felt strongly about or felt influenced by the presence of men – until that clinic. Things there just felt totally different – not better or worse, just different.”

Sinead, who together with her husband, Tik Maynard, live in the same area of Citra, Fl. as Jenny and Mette, asked if there was a way she could be involved in the clinics in the future. After a few brainstorming sessions, the women emerged with a powerful new idea and a way to promote the concept to an even wider audience. The group has since signed a production deal with Horse & Country TV, who will film and produce the first Energy for Confidence and Connection in Horsewomen symposium, happening January 23-24, for distribution on its streaming platform.

At the core of the teaching and the symposium lie the six Cs, the core values around which the three women chose to build their messaging.

“For 10 years, I’ve been helping scared, terrified, self-punishing women,” Jenny explained. She described how a male-driven, male-originating model of training that encourages strength and brawn over compassion and connection can create less confident riders. “What these women have done is they’ve had to violate their own instincts. The idea of strength and force is a model that doesn’t fit – it’s like wearing a man’s shoe.”

Of course, this isn’t intended to label all male-driven training models as wrong; indeed, there are countless examples of compassionate male trainers, and much of the foundation of horse training centers around a relationship and partnership with the horse. However, the reality is quite simple: women understand women, and from this place of mutual understanding emerges a different school of thought, a different way to find solutions rather than simply adhering to what’s always been done.

Mette drove the notion of compassion and connection with the horse home as she recounted her early riding days and how her career has shaped her current path. “I don’t think I’ve ever used the word ‘submission’,” she explained. “Now, that doesn’t mean I don’t want my horses to work hard. I want them to perform, but I want them to leave the arena feeling like they weren’t ‘done to’, that they were an active, engaged participant. So many of the dressage clinics I attended through the years were so much about ‘don’t let them get away with that’ or ‘make him listen to you’ – all very dominant concepts. And that kind of ride can leave you feeling bad after a hard ride.”

How many times have we all gotten off our horses after a particularly difficult ride, feeling like we’ve let them down? Maybe we’ve struggled, maybe we’ve “made” the horse do something, but at the end of the day we don’t feel like we’re on the same page, and this leads to guilt. “That’s not love,” Mette said. “We always want our horses to feel ‘with us’, even after a hard work.”

This is where the C-6 symposiums will differ. “We didn’t even want to use the word ‘clinic’ as we know that even just the word can elicit a negative connotation,” Jenny said. “And it’s really about tools and using them well. You can use a tool well, but it also depends on who is swinging the hammer, which is where our model comes in. We may use the same tools as a man, but we’ll use them differently.”

The symposium will take place with a small group of riders and will include riding demonstrations, candid conversation sessions, and riding instruction with an eye to connect to each rider and help them through their uncertainties. The group also plans to host regular clinics beyond this month and add virtual options in order to reach as many riders as possible.

Sinead says her visit to that first clinic Jenny and Mette invited her to changed her life, and now the group is working furiously to share what they’ve discovered – and seen the results of – with a larger audience. They hope the project will empower more women to feel safe, seen, and heard. Indeed, this has already begun: as word spreads about the project, more women reach out, eager to finally feel understood.

“The thing we don’t get, especially as women, is to explore what the relationship to ourselves means,” Jenny said. “And whatever sort of fishbowl you’ve been raised in shapes what you believe that you’re supposed to think about yourself. You should be confident, quiet, calm, reserved – whatever it is. And when internal doesn’t match external, you get problems. So what we do is work with people to help them bring out some of that – our swirling private voice that is just so bad to ourselves – and understand how to manage it, to understand that there is another way.”