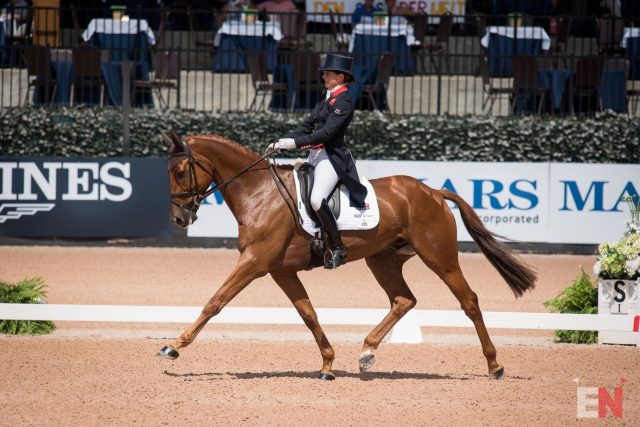 After watching half the field today, we’re blown away by the caliber of horses and riders here in Tryon. They’re putting it all on there — fighting for every single point. Let’s check in with a few of today’s riders:

Rider’s thoughts on their dressage tests…

Julia Krajewski (GER): “I am absolutely thrilled. I must not overdo my preparation with him, and he trotted in and felt really good. Maybe something really good was going to happen today, and he felt awesome during the test. He has done good dressage tests before, but to produce it in such an atmosphere on this day, the people went crazy.

“It is not a personal best. He has had scores of 19 something before, but it is not just push a button and get 19. With a horse like him that can really do it, it is about the detail. I am so proud. He is only 10. I had to stop the tears when I finished the test. It is an amazing feeling.”

Mark Todd (NZL): “It wasn’t as good as I had hoped, but realistically with this horse this is only his second season of proper eventing, and he went in there and he just got a little bit distracted and had a few little ragged moments here and there and a couple of mistakes that you can’t afford to do at this level.We came here knowing he was a bit green in this phase, and hopefully he can make up for it in the jumping and not add to it.”

Chris Burton (AUS): “I’m really happy with him (Cooley Lands), he did a lot right you know but he’s still got a long way to go and we can always improve on personal performance but I am so happy with him, he tries really hard. I’m so pleased, what can I say.”

Alex Tua Hian (CHN): “I’m very happy. There’s a chance we will be dead last or near the bottom but this horse will be one of the youngest and certainly the greenest and most inexperienced and it was a question whether we bought him here or didn’t bring him here, we knew he was going to be well out of his depth for the dressage but he’s such a fighter jumping and such a fighter on the cross country that we thought for him for the future, to give him a chance here without any pressure or expectations, was a good investment.

“It was definitely the right decision, for us the dressage was about surviving and not looking like a total fool and actually the horse tried, he made lots of mistakes but we knew that was going to happen.”

Lauren Kieffer (USA): “He was alright, he’s still a bit green so he had a couple of bobbles but they really like him and where he was good, the quality was really good so it’s more him just getting into these big atmospheres more and more and I think he will just keep getting better and better.”

Will Coleman (USA): “There is a real chemistry with this team. Everyone gets along and is really supportive of one another. I do think it is a strong team. We have got strong characters, big riders and some big cross country horses.”

Chris Burton (AUS): “The Australian team is the best. They are fantastic, they’re so supportive and we’re a great group of friends, the high performance panel runs so smoothly these days and for me it is a privilege to be a part of such a fun team.”

Tina Cook (GBR): “Obviously I’m very disappointed [about being named the individual], I love being part of a team, this is my fifth world games and there’s nothing better than being part of the British team, but I still am in many ways. Because of Billy the Red’s attention and my injuries in the Spring, everybody else has got better than me this year so I have to accept being an individual but I have a chance to go for an individual medal, we are very much team though.”

On the cross country course…

Piggy French (GBR): “I’ve walked the course, it’s there to be jumped. It’s a championships so we are ready under different pressure and it’s just about getting the job done. There’s plenty of places where we can make mistakes and have sillies so we’ve just got to be on it and hope the weather is alright for us, I think it’ll be the luck of the draw what stage of the day you go; whether it’s very sunny or very wet or not so I think we are in the hands of that a bit as well.”

Sam Watson (IRL): “It is all very jumpable, but there are a lot of combinations. It is a test of concentration, and it could well turn into a test of stamina as well. There are a couple of meaty complexes in the middle of the course where I think line will be very important.

“[Horseware Ardagh Highlight’s] job is to deliver on Saturday and be a good pathfinder for the team, and you can see from his temperament that that is really what he wants to do.

Blyth Tait (NZL): “It’s very impressive and the going is amazing, so no complaints there. There’s a couple of very difficult combinations, a couple of complicated combinations but we were potentially expecting to be really frightened and on a very quick look, we feel that ridden well it should ride well. Obviously we’ve got the hill at the end and who knows what factor the weather will play.”

Alex Tua Hian (CHN): “I think it (cross-country course) looks awesome, it looks absolutely awesome. They’ve done an amazing job, there are lots of interesting options out there, there are a few fences that have us riders scratching our heads over what we are going to do but that is how a championship course should be. It has options for the lesser nations and the lesser horses and riders to complete and get round so I think Mark Phillips has given us exactly what we needed.”

Andrew Hoy (AUS): “I have been in this sport for so long, you can be on a high for one second, and then the next second it can change. It is step by step. We have really good riders and really good horses, and it is just up to everyone putting in a personal best.”

Gemma Tattersall (GBR): “It is a complete privilege and honor to be the pathfinder for the team. We have a great partnership and I am just excited to get out there, get going, get the job done and then enjoy the day.”